Why Are High-End Galleries Jumping Into Bed With Luxury Hotels?


The relationship between the art and hospitality industries has historically been one of mutual distrust. In fact, the prospect of guests half-heartedly glancing at the walls during dinner horrified Mark Rothko so much that he called off his first major commission for New York’s Four Seasons restaurant in 1959.

Now, however, the two sectors are realizing that they can accomplish more together than apart. As vaccinated people return to travel after a yearlong pause, hotels and galleries are equally eager to greet them (and their ample disposable income). Like any sensible marketing ploy, the union between art and luxury hotels is designed to create an atmosphere that the wealthy want to be a part of—and return to again and again.

“Collaborating with hotels is not about splashing art all over the place and hoping for a sale,” said Kamel Mennour, the Paris dealer who helped outfit the art at Palace Le Bristol in Paris. “It is an opportunity to create an experience hors-les-murs, and offer a different context for artistic encounters.”

Just last year, Galleria Continua opened a permanent space inside the St. Regis in Rome. (The current show of work by Ornaghi & Prestinari features works ranging from $3,700 to $12,200, several of which have sold.) In London, Gagosian has outfitted the Mews at the Connaught, a three-story townhouse in Mayfair, with works by artists ranging from Louise Bourgeois to Marc Newson. 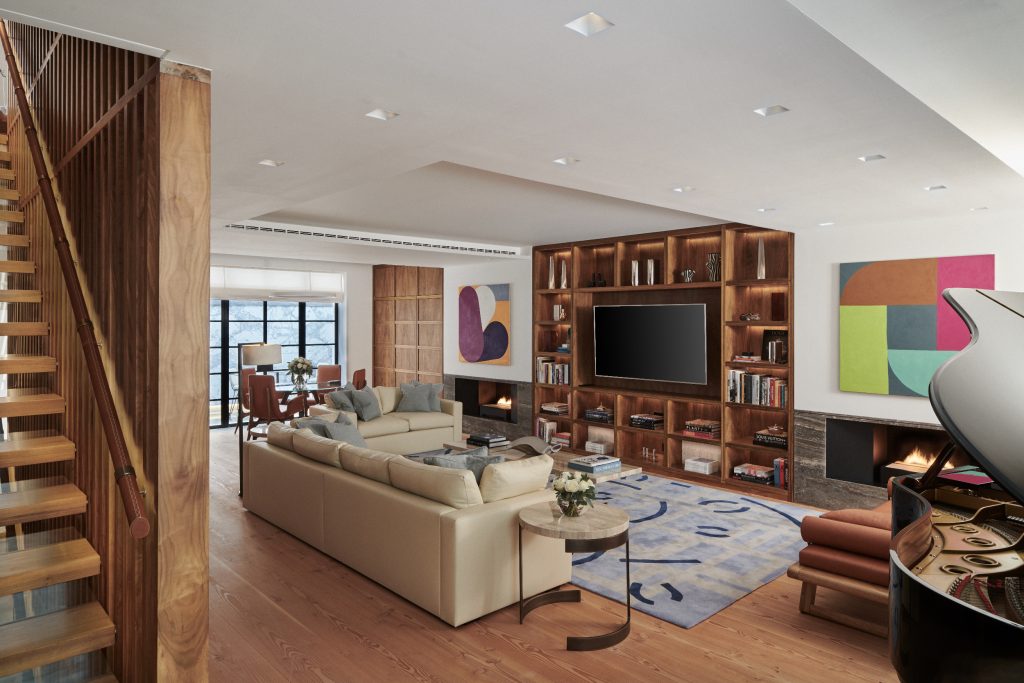 The interior of the Mews, a private townhouse in London with art provided by Gagosian.

In late 2018, the owners of Hauser & Wirth even opened their own hotel in the Scottish village of Braemar, the Fife Arms, which is adorned with a whopping 16,000 works of art and design.

Room service doesn’t come with a price list… yet.

These kinds of collaborations are still relatively new. La Colombe d’Or in Saint-Paul-de-Vence, France, is probably the only inn historically known more for its oil on canvas than for the quality of its bedding. From the 1930s onward, artists like Matisse and Picasso traded works in exchange for a night’s stay, turning the place into an ad hoc residency. 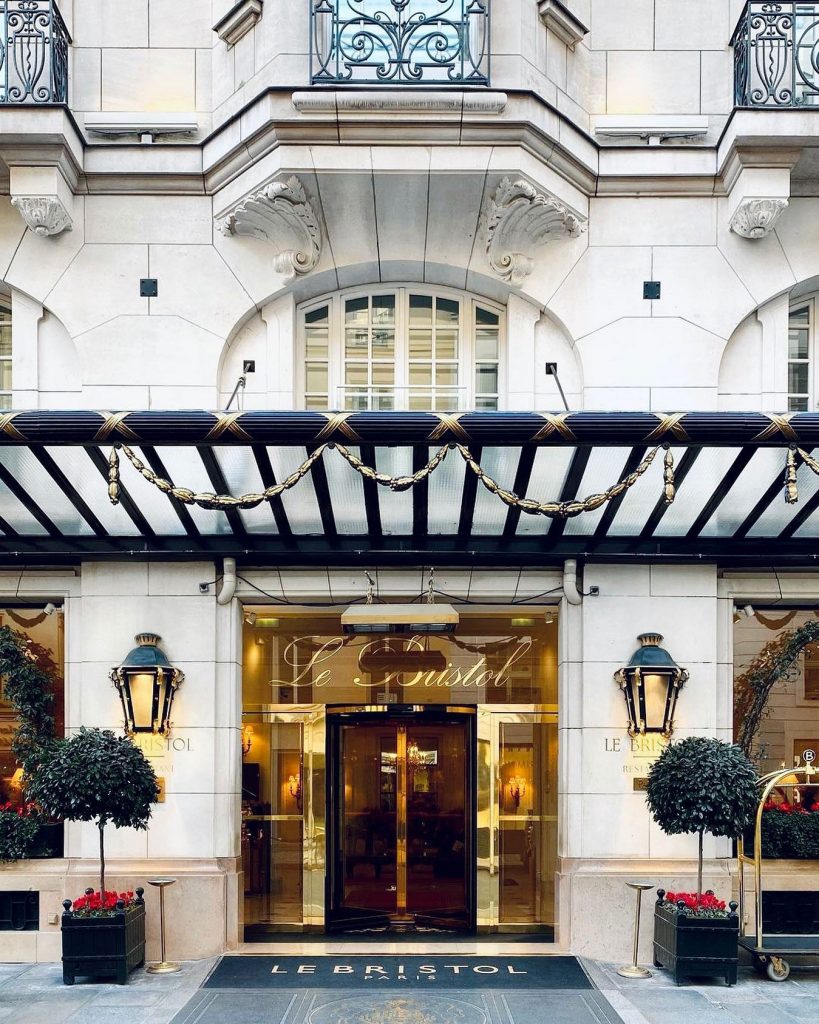 “Galleries were not getting involved and artists didn’t mind the barter,” said curator Francesca Gavin, who sourced most of the pieces for Soho House. “They wanted to hang out in the clubs.”

The barter strategy not only enabled the company to develop a unique look (Gavin even covered some of the bathrooms with Jonathan Yeo’s pornographic wallpaper), but it turned out to be a wise investment (though the works are not for sale). Gavin recalls buying a Cyprien Gaillard engraving for a couple of thousand pounds. “Forget getting your hands on one now,” she said.

The growing wealth of emerging markets began to cement the union between art and luxury hotels around 2000. “Affluent clients from Asia, Russia, and the Middle East wanted to stay in lavish properties where they could spend—and flash—their newly earned cash,” said Vadim Grigoryan, a luxury consultant and founder of Spirit and Spirit. Luxury hotels wanted ways to entertain an international clientele who had started to collect art—and galleries stepped in to help.

Today, the Soho House model has given way to a more professionalized one. Production and installation costs are usually covered by the galleries, who see the hotel as an opportunity for both highly targeted advertising and extra exhibition space. Top hotels no longer barter with artists directly, and they rarely take a cut of sales.

In one typical deal, Park Hyatt Paris Vendôme hired curator Constance Breton in 2019 to manage an exhibition of work by Gregor Hildebrandt in the bar, restaurant, and hotel lobby. Hildebrandt’s galleries, Emmanuel Perrotin and Almine Rech, split the costs. According to Breton, around 50 percent of the buyers from the show came from the hotel, and 50 percent were existing gallery clients. (Both galleries declined to comment.) 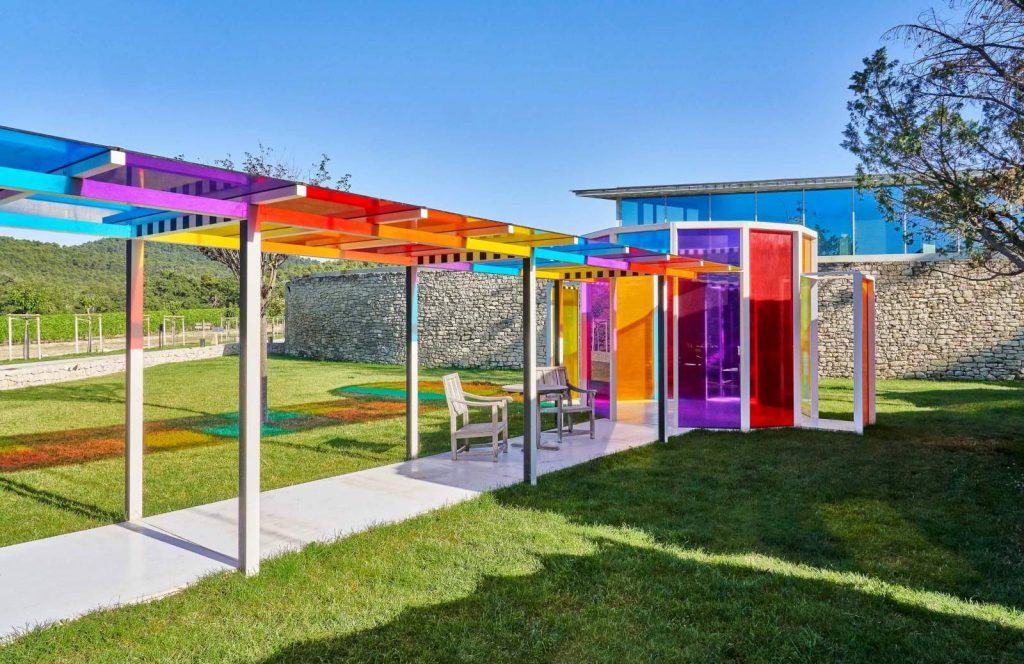 An installation by Daniel Buren at the Château La Coste in Provence. Courtesy of the hotel.

But for major collectors, hotels are not yet an obvious or frictionless place to buy art. “Hotels are clearly making an effort to put more interesting pieces on their walls,” said collector and Midnight Publishing Group News columnist Kenny Schachter, “but they haven’t worked out how to facilitate sales just yet.”

A hotel widely considered an exemplar in merging hospitality and art is Château La Coste in Provence, which has worked with Pace on exhibitions by Yoshitomo Nara and Lee Ufan and with Lévy Gorvy on a show of work by Pat Steir. The property’s vineyard is also home to more than 30 monumental works, including by Richard Serra, Tadao Ando, Sean Scully, and Alexander Calder. They also have that Frank Gehry pavilion, originally built for the Serpentine in London.

Such hotels sometimes serve not only as exhibition venue, but also as collector. Château La Coste owner Paddy McKillen bought Daniel Buren’s colorful canopy from Kamel Mennour after seeing it at Paris’s Palace Le Bristol. In 2019, the owner of Le Domaine de Etangs Garance Primat bought a work by Anselm Kiefer from Thaddaeus Ropac because, she said, “she needed one for [a] show” in the hotel’s exhibition space.

One might assume that even in this new paradigm, luxury hotels would seek out inoffensive, Instagram-friendly artworks. But if that’s all they wanted, they could hire an interior designer. Many are looking for more memorable, thought provoking work. “We’re not here to shock, but to dare, to question, and to educate,” Mennour said.

C21 Museum Hotels, founded in 2006 by American collectors Laura Lee Brown and Steve Wilson, share a similar vision. “We don’t shy away from any topic and have shown works from Kara Walker to Yinka Shonibare,” said the hotel chain’s Alice Gray Stites, who looks after the art for the group’s nine locations. “Our staff learns about the works and how to positively engage with all kinds of audiences.”

Gray Stites secures loans and museum collaborations and attends a few art fairs a year to keep a finger on the pulse. In recent years, she has acquired a JR from Jeffrey Deitch and a Leo Villareal from Pace. Dealer Sean Kelly flew to Louisville to discuss Marina Abramovic’s screening of The Artist Is Present at the hotel, shown in partnership with the Kentucky Center for the Performing Arts. 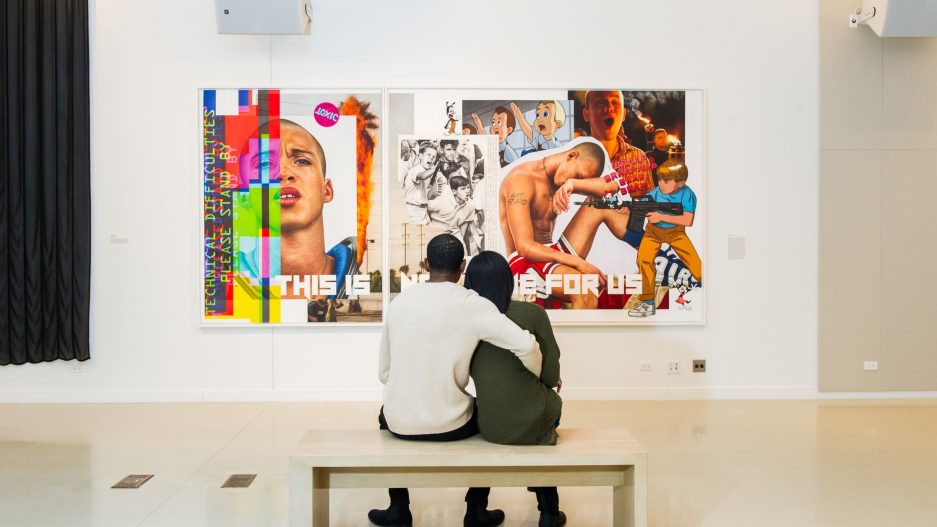 Installation of THE KID, I Believe in the Promised Land, (2019). 21c Museum Hotel in Chicago. Courtesy of Angela Garbot Photography.

These platforms can also serve to elevate emerging artists. Five years ago, Gray Stites bought a work by Titus Kaphar featuring a Michael Jordan silhouette for about $25,000. After she hung it at C21’s Oklahoma City location, it didn’t take long for the NBA players training nearby to express interest. She sent them to Jack Shainman Gallery, raising Kaphar’s profile along the way. Today, his work sells for six-figure sums.

According to Vadim Grigoryan, the pillars of a successful luxury hospitality business are nature, community, culture, and fine dining—and after the pandemic, he says, these pillars will be more important than ever before. Following this rubric, Vadim brought immersive, sustainable landscaping, haute cuisine inspired by Mayan-Mexican traditions, and local artworks to the Azulik Hotel in Tulum. A nearby art museum, currently showing work by Ernesto Neto, is free for hotel guests.

“I cannot imagine a luxury hotel of tomorrow,” he said, “without art being integrated in the subtlety of the experience.”