While a Cultural War Continues to Rumble in France, Art Remains a Lighthouse for Progressive Views


Accused of pandering to the far-right ahead of France’s federal election in 2022, President Emmanuel Macron attempted a balancing act. In January 2021, the leader’s party said it would create a “memories and truth” commission on France’s painful colonial history and war with Algeria. In March, it released a report on the positive contributions of individuals of immigrant backgrounds called “Portraits of France.”

These initiatives are part of a broader effort to find alternative solutions to growing demands for the removal of statues and street names honoring historical figures that are connected to France’s colonial past, including its slave trade. Yet, at the same time, Macron and some of his ministers have been igniting emotions as they publicly denounce forces that they see as stoking so-called “separatism,” including what many see as Us-style political correctness and cancel culture—the latter of which is a largely unpopular but growing concept in France—as well as a perceived US-version of multiculturalism.

Recent events within and outside of France have further stoked this upheaval. The #MeToo movement has been met with uneven hostility. The October decapitation of a teacher who showed cartoons of the prophet Muhammad during a course on free speech has led to a new bill “against separatism,” which aims to combat Islamic radicalism. And the protests in the wake of the murder of George Floyd in the US last year have prompted renewed conversation about the nature of racism in France, and put the country’s old ways of cultural assimilation on trial.

Against this backdrop of a culture war that shows little signs of abating, artistic projects remain a powerful place for progressive discourse in France—even as some factions in the country move to denounce what many have called an “importation” of America’s discourse on identity politics. 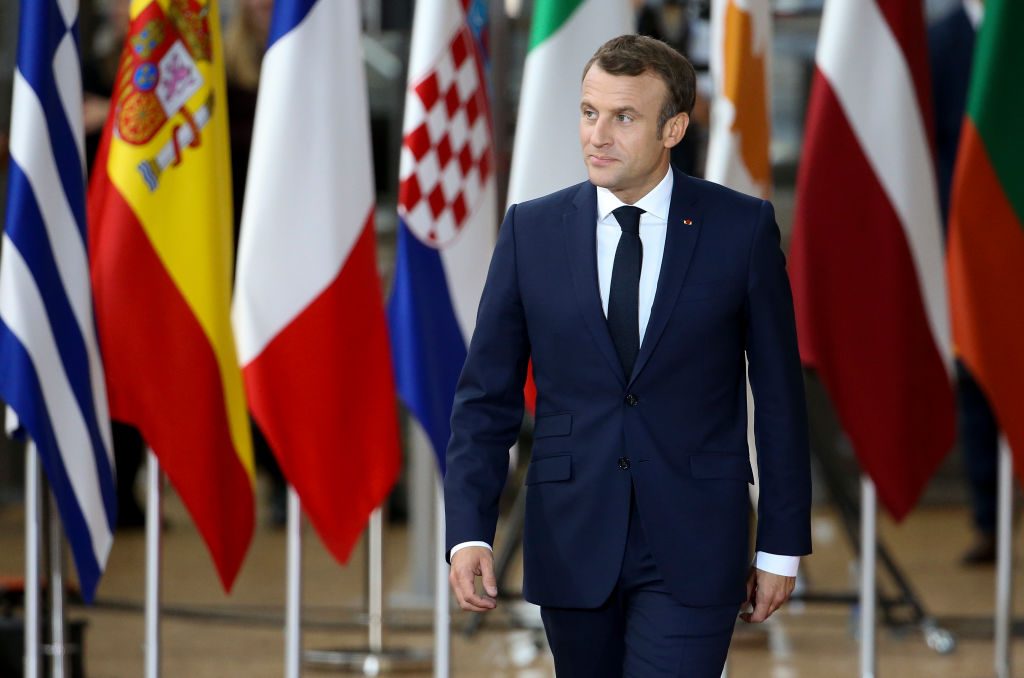 As warring factions argue over how to integrate populations of citizens descended from former colonies, a new resurgent left, notably marked by young people from within the very populations at the center of the issue, have been pushing back against the country’s “universalist” social model, which traditionally downplays—some would say ignores—cultural differences between citizens. The traditional style of governance aims to avoid what is often viewed as an Americanized version of warring ethnic and religious groups.

In a Le Monde editorial from March, supporters of the president’s “Portraits of France” project said that playwrights, filmmakers, and painters should “seize upon these life stories and make works of art out of them that speak to our society and our world.” They added that “by ignoring a part of our shared past, we have made it harder to understand our present and to write our future.” This effort at reconciliation comes on the back of the French president’s breakthrough comments a few years ago on restitution, when he commissioned a special report advocating for the return of African art from public museums that had been taken “without consent,” tipping off the movement in Europe.

But these cultural in-roads are not always met with open arms. The executive branch of French government has specifically singled out academia, including the social science fields of post-colonial and intersectional studies, saying that these areas are under risk of influence from radical agendas that are pitting communities against each other. It also announced in February a sweeping investigation into the presence of “Islamo-gauchisme”—a term loosely referring to extreme-left activists who are “complacent” toward radical forms of Islamism or who apologize for terrorism—in universities. As a result, many are worried about censorship in schools and that scholarly research into the darker chapters of France’s history is under threat. 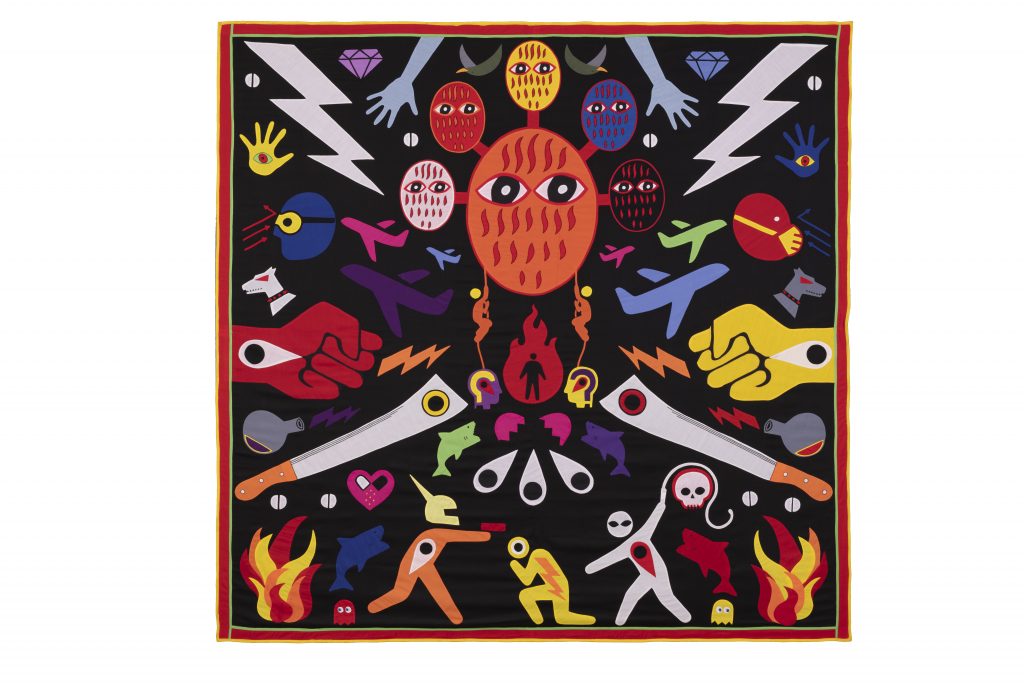 This debate spewed over into the art world when a government-commissioned portrait series of women publicly displayed in March in Paris, which was designed to celebrate diversity by featuring images of professionals from an array of different fields, sparked a vicious response. The photographs in “109 Mariannes” became fodder for controversy due to the inclusion of the young astrophysicist Fatoumata Kébé who was singled out for her headscarf. Angered that Kébé was chosen to emblematize “Marianne,” the personification of the French Republic often seen interpreted in art or on stamps, former spokesperson for the right-leaning Republican party, Lydia Guirou, was among the angry tweeters: “Marianne is not and will NEVER wear the headscarf!”

The sentiment dovetails with a draft bill that the Senate amended this month to forbid chaperones on school field trips from wearing Muslim headscarves. The bill has been strongly criticized for stigmatizing Muslims and called an overreach of France’s already strict secular laws, which forbid the wearing of clearly visible religious symbols in schools, and by civil servants. That said, opinions are changing: A poll from earlier this year by Ifop has showed that high school students have “ruptured” with an older generation’s more restrictive view of French secularism, and a growing number favor allowing the headscarf in school. 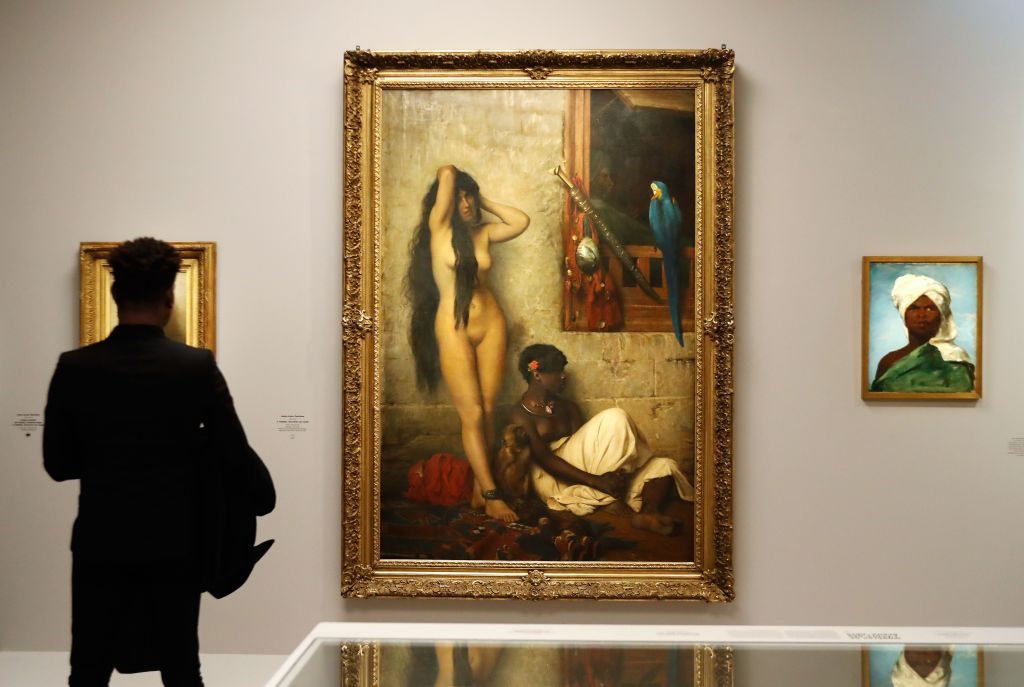 Visitors look at “The Slave for sale” (1873) painting by Jean-Leon Gerome during the press visit of the exhibition “Black models: from Gericault to Matisse” at the Musee d’Orsay in Paris on March 25, 2019. Photo: Francois Guillot/ AFP) via Getty Images.

The Faces of the Republic

Despite instances of incendiary reactions, the cultural sphere is being won over by a new wave of progressive viewpoints. A younger generation has become eager to more openly focus on the topic of race and difference. French citizens of immigrant descent are raising their voices to say that, in practice, their identities are under-represented in a society that discriminates against them for their inherent differences. With a sense of irony, they describe a society which claims to be blind to those differences while demanding that any outward signs of that difference—for example, hijabs—are avoided, to best fit a cultural mold.

“We like the idea of ‘universalism,’ because it’s a kind of utopia… But it’s easier to go to Mars than to the land of universalism,” Nadine Houkpatin told Midnight Publishing Group News. She is co-curator with Céline Seror of a show that includes work by artists from Africa and its diaspora called Memoria: accounts of another History that is on view until November at the Frac-Nouvelle Acquitaine MECA in Bordeaux. Houkpatin notes that while a new generation has indeed been “inspired” by some of the “woke” political ideas stemming from the U.S., the theorists behind many of these left-leaning ideas are often of French origin. 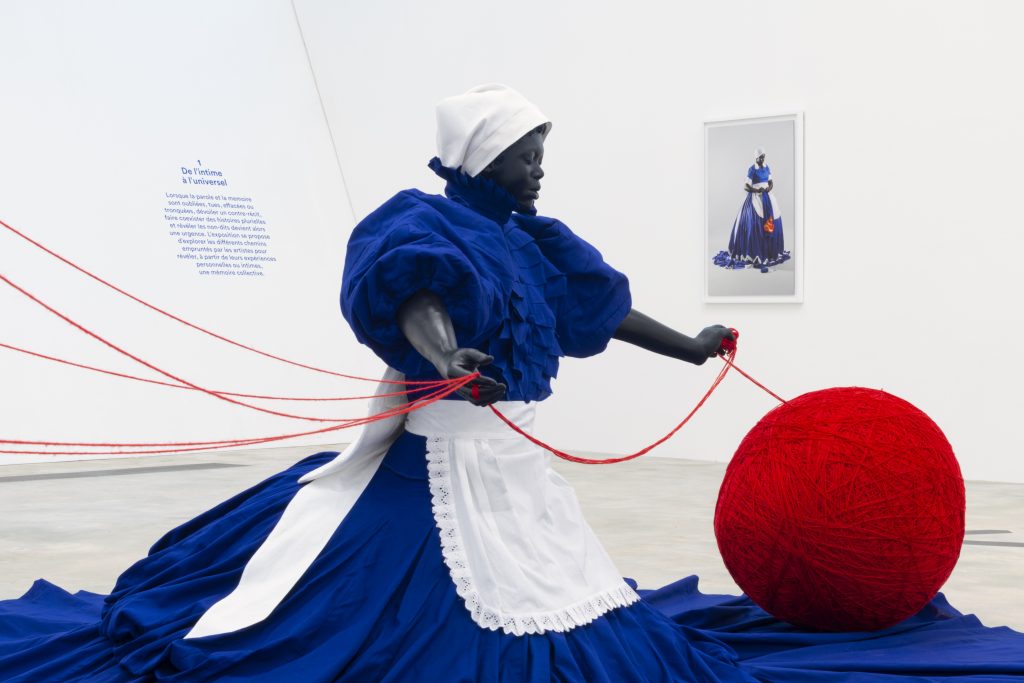 Views of the exhibition “Memoria: Tales of another History” at the Frac Nouvelle-Aquitaine MÉCA. Photos: Gaëlle Deleflie.

The curators of the Bordeaux show surmise that, when it comes to discussing these issues through art, people have an easier time accepting more progressive, controversial topics. “I think that through art, we can address these questions that are essential,” said Seror. Art “gives a certain liberty that enables us to express ourselves about these subjects,” she added.

Indeed, it seems that the art world has been somewhat shielded: Responses were overwhelmingly positive to the two shows, despite the debates going on in the public realm. The show at Musée d’Orsay even received a nod from a critic who supports the government’s investigation into academics. “I saw the exhibition, and very much appreciated it,” said Nathalie Heinich, a sociologist who has published work on contemporary art.  She is in favor of the French government’s recent stance against “radical” intellectual currents “that come from elsewhere” and a signatory in an editorial in Le Monde that described them as “feeding a hatred for ‘whites.’” 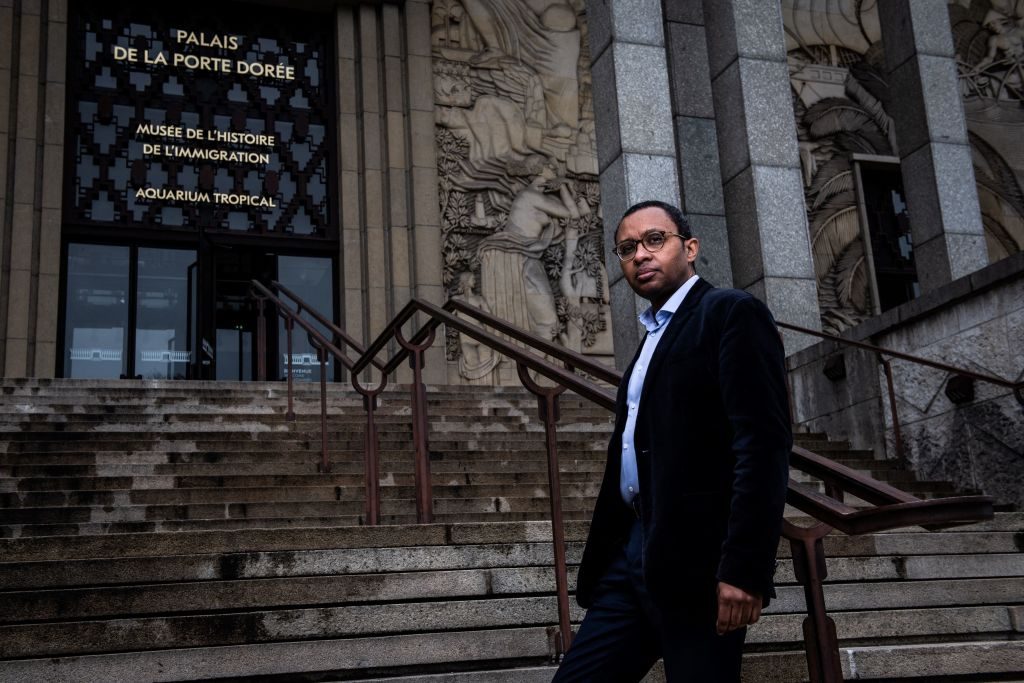 Immigration Museum director Pap Ndiaye, a French historian, poses during a photo session, outside the museum in Paris on March 5, 2021. (Photo by Martin BUREAU / AFP) (Photo by MARTIN BUREAU/AFP via Getty Images)

Pap Ndiaye, the historian and new director of France’s immigration museum, the Palais de la Porte-Dorée, recently told reporters that he too is concerned by the pushback on academia. “It comes at a moment when post-colonial and intersectional questions are beginning to find their very small space in French universities,” he said. “If we stop teaching them, where will the students go?” The Paris museum he oversees is currently showing an exhibit on the immigrant experience that includes 18 artists from Africa and its diaspora—it is a poignant exploration of artistic diversity and it falls on the 90th anniversary of the museum, which infamously opened with an exhibition to celebrate the colonies and included human exhibits.

The title of the show at Ndiaye’s museum, “Ce qui s’oublie et ce qui reste,” which translates to “What is forgotten and what remains,” also seems to ask what traces of this dark past remain in the popular subconscious today. It is on view until July.

While the government and certain factions of the population continue to rail against the universities, art institutions are set to become an increasingly singular voice for pressing questions about post-colonialism in France. “When an artist presents [their work] in a museum that is open to the public, then we can start talking about colonialism, decolonization, and its impact on society,” said curator Seror. “That’s the power of art.”