Which Country’s Art Market Is Bouncing Back From Lockdown Better Than Ever? We Crunched the Numbers


The pandemic threw almost every country’s auction market into disarray. But some nations are coming out of lockdown with stronger art markets than they had even back in 2019, well before coronavirus changed the trade as we know it, according to the Midnight Publishing Group Price Database.

The United States has demonstrated a particularly strong trajectory, with sales up 107.7 percent in March 2021 over March 2019. Also bouncing back swiftly is the United Kingdom, which has seen sales shoot up 43.3 percent, and France, which enjoyed a 26.4 percent uptick.

Conversely, a number of countries whose art markets managed to weather lockdown well have not continued that upward trend now that salesrooms are opening back up. China and Germany both saw their March fine-art auction sales shrink between 2019 and 2021.

So what does all this mean, and why should you care? Read on for the rundown. 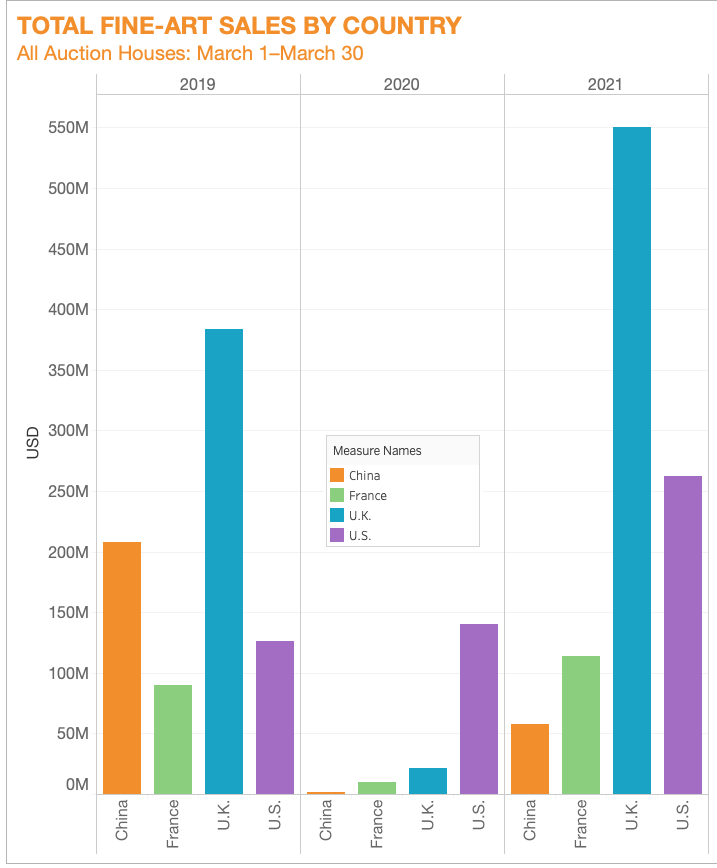 Tell it to me straight. Which country’s auction market is growing the most right now?

–The answer, according to our data, is the United States.

–Last year marked a dubious milestone for the U.S. art market—it was the first time in many years that the country’s total auction sales fell behind China’s, knocking Uncle Sam down to second place in the global ranking.

–Sellers in the U.S. parted with more works than they did in either March 2019 or March 2020—and buyers paid higher prices, too.

–There is one outlier that should be mentioned here, and his name is Beeple. Because the sale of Beeple’s record-setting NFT Everydays: the First 5000 Days was organized by Christie’s New York, we counted it as a sale within the U.S. And that means it added a whopping $69 million to the American auction market in March 2021.

–If we remove Beeple from the ledger entirely, U.S. fine-art auction sales would still be up 53 percent in March 2021, more than any other major national art market.

–It’s fair to surmise that sellers and buyers in the U.S. market alike feel more comfortable transacting at higher levels than they did not only during the pandemic, but also before it hit, in 2019.

Who else is doing well?

–The U.K. saw $550 million in total fine-art auction sales in March 2021, up 43 percent from March 2019, when its major London evening sales failed to catch fire amid Brexit jitters. The 2021 total was boosted by high-ticket lots, including three works—by Banksy, Edvard Munch, and Pablo Picasso—that sold for over $20 million apiece.

–France, whose auction market was on the rise before the pandemic but suffered mightily in lockdown (total sales tumbled nearly 90 percent in March 2020), is now rebounding healthily. Its fine-art auction sales in March 2021 came in at $114 million, up 26.4 percent over the same month in 2019 (and a whopping 1,085 percent over March 2020).

So, what’s the deal with China?

–China’s decline may look worse than it is. Between 2019 and 2021, Sotheby’s moved its major spring Hong Kong sale series from late March to early April, meaning the results are reflected in our 2019 figures, but not our 2021 figures. (One sign that the sales calendar is playing a role: The number of lots sold in China fell around 49 percent between March 2019 and March 2021—though total sales dropped considerably more.)

–The figures do suggest a decline in some areas of the Chinese market that are particularly active in March, like Chinese paintings and calligraphy. So stay tuned: We’ll have a better sense next month of exactly where the country’s auction market stands.

–In the meantime, keep your eyes on the U.S., the U.K., and France to see if they can retain their momentum as they continue to emerge from lockdown.