Which Country Had the Most Lucrative Art Market in the World Last Month? We Crunched the Numbers—and the Results Are Revealing


In a normal year, June would be the last hurrah before art-world denizens checked out for the summer. They’d activate their auto replies on the last VIP day of Art Basel before hitting the beach in the Hamptons or the Amalfi Coast (where they would probably surreptitiously answer emails anyway).

This year, however, Basel was pushed to the fall, which means June belonged to the auction houses. Phillips held its marquee contemporary art evening event in New York (historically, a May affair) and another in Hong Kong, while Sotheby’s and Christie’s hosted their Modern and contemporary art summer sales in London as usual. Over in Beijing, Poly Auctions held a series of lucrative sales of Chinese ink painting, porcelain, and 20th century Chinese art.

Overall, the fine-art auction market fared better last month than it did in June 2019, with total sales up around 25 percent.

Even more revealing, however, is that amid all this activity, it’s clear the sands of market power are shifting. Of the top five largest auction markets, all but one—the U.K.—saw its total sales rise in June 2021 over June 2019. This is, of course, all the more significant considering June is one of the two biggest months of the year for the U.K. market.

What, exactly, is going on here? Read on for details. 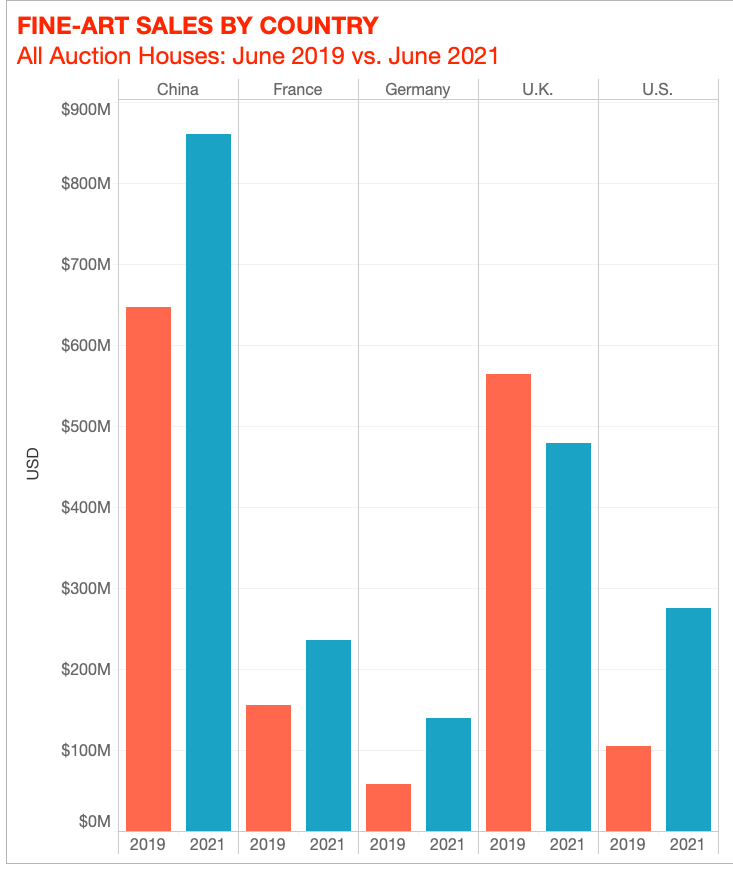 Let’s start at the beginning. How did June 2021 stack up to June 2019 (the most recent equivalent we’ve got, considering that we all agree 2020 doesn’t really count)?

So, who do we have to thank for this astronomical spend?

Well, the simplest answer is: very rich people, who only got richer during the pandemic. The more complicated answer has to do with shifting market influence by country (and the very rich people who live there).

China (which, for our purposes, includes Hong Kong) came out on top, delivering $860 million in total sales in June 2021, up 33 percent from the equivalent month in 2019. One of the biggest growth markets, on the other hand, was Germany, which held its annual summer auctions in June and saw its total sales grow a whopping 143.3 percent. (This was in part due to one record-setting work, a Ming-dynasty bronze that sold at an auction house in Stuttgart for €14 million/$16.5 million. And you might want to credit China for that one too, as a Chinese collector was identified as the buyer.)

O.K., so China is fueling a lot of the growth right now. I feel like I’ve heard that before. But wasn’t June supposed to be a big month for London?

It sure was! That’s why it is so surprising that the U.K. saw its total sales fall by 15 percent from June 2019. Even more surprising, the biggest two sales of the month were Christie’s 20th/21st century evening sale and Sotheby’s modern and contemporary art evening sale in London.

So why did the U.K.’s total sales fall?

It’s a tale of consolidation and condensation. In June 2019, London hosted five evening sales (Christie’s and Sotheby’s had two each, one for Impressionist and Modern art and one for postwar and contemporary; Phillips had one). Last month, there were just two nights of evening auctions. The Big Two houses have also reduced the scale of their offerings: Sotheby’s squished a Modern British art sale and a Modern and contemporary sale into the same night, while Christie’s did away with the distinction between Imp-Mod and contemporary entirely, hosting a single sale for its new, fused 20th/21st century art department. (Phillips, meanwhile, shook up its calendar, moving its London contemporary art evening sale back to April.)

Is this just an issue of calendar quirks, or is something really changing here?

This does demonstrate a significant shift. London’s June sales are becoming a more modest market moment, while auction houses are opting to save their (shrinking) supply of high-wattage Impressionist and Modern works for New York. Meanwhile, hot, young contemporary art is increasingly in highest demand in Asia, so houses are hoarding material for Hong Kong sales as well as the seemingly constant churn of online offerings that cater to an international audience.

Why should I care where auctioneers bother to sell things, anyway? Isn’t the whole market international?

While it’s true that these days, a buyer from Hong Kong can bid as easily in a sale held in Stuttgart as in Shanghai, the relative size of countries’ markets still matters. They can determine where auction houses hire, where they spend energy (and money) cultivating new collectors, and, later on, where galleries and other art-industry players follow. There’s no need to give up on London’s rich and vibrant art scene yet—but it’s clear that the most frenetic commercial energy is congregating elsewhere right now.