We Analyzed May Auction Sales Around the Globe to See How They Compared to Their Pre-Lockdown Equivalents. Here’s the Breakdown


You might have found yourself recently looking around a subway platform or buzzy restaurant, marveling at the fact that, even for a moment, it somehow feels as if we haven’t just been through an epochal, 18-month upheaval that will be memorialized in history books for centuries. You may get a similar feeling looking at the global auction results from May 2021.

It’s as if nothing happened.

A total of $2.9 billion worth of fine art sold at auction around the globe last month, a period that included successful major evening sales at Sotheby’s and Christie’s in both New York and Hong Kong. The month’s total is down just 1.8 percent from that of May 2019, before we had ever even heard of the concept of social distancing. It also represents a whopping 1,581.7 percent rebound from May 2020, when the pandemic shredded the traditional auction schedule to smithereens.

So what has returned to the status quo since May 2019, and what has changed? Read on for answers. 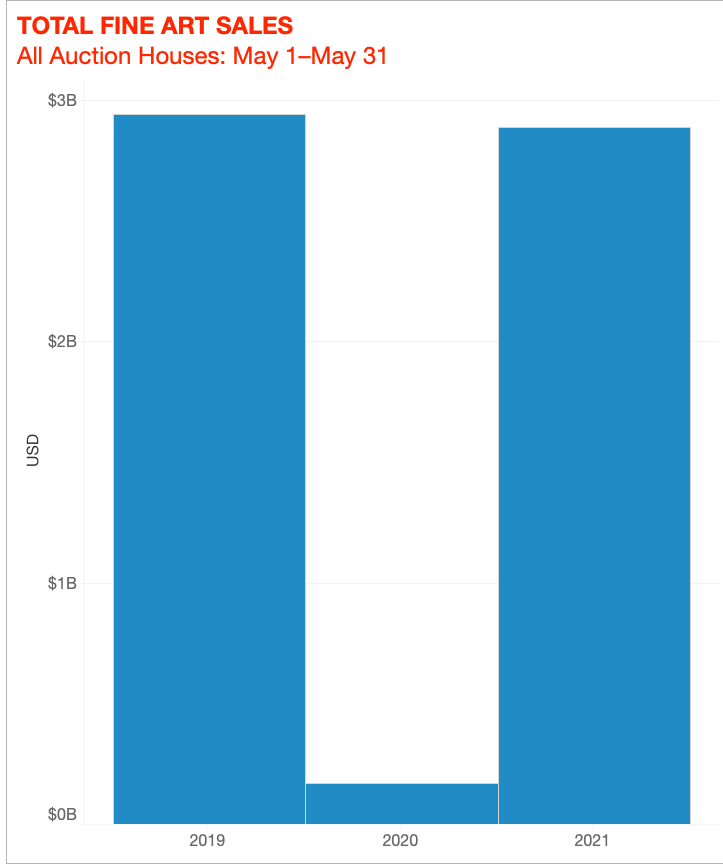 Are you really telling me the market is in essentially the same position as it was in May 2019?

–Part of this year’s slight decline may be attributed to a simple schedule change: Phillips is holding its New York evening sale (which made nearly $100 million in 2019) on June 23 instead of on its traditional May date.

–In fact, the very top end of the market has also been relatively consistent across the mega-sale months of May 2019 and 2021. Both saw auction lots priced at over $10 million bring in a combined $1.1 billion. (In 2019, that huge figure included Monet’s Haystacks and Jeff Koons’s Rabbit; in 2021, it was led by Picasso’s portrait of Marie-Thérèse and a couple major Basquiats.)

–Sidenote: For those of you keeping track at home, May 2020 saw exactly zero sales of works priced over $10 million at auction.

OK, the low end and the high end are similar. So what’s different this time around?

–A few things. First, the one slice of the market that has lost steam is the $1 million-to-$10 million price bracket, which shrunk nearly 18 percent between May 2019 and May 2020.

–What happened? The energy (and dollars) that had been going into high-end but not ultra-high-end work seems to have been distributed across lower priced sectors of the market.

What does all this tell me about the state of the market?

–The consistency on the ultra-high-end tells us that collectors are just as confident about consigning top-flight works now as they were before the pandemic hit. (In fact, they might be even more confident: While the total amount of sales generated by works over $10 million was roughly the same between May 2019 and May 2021, the number of works sold grew from 39 in 2019 to 45 in 2021.)

–Meanwhile, the shifts taking place in the middle of the market confirm a trend we’ve witnessed anecdotally—that a new crop of buyers is increasingly interested in gambling on slightly lower priced work and less interested in the consistent blue-chip examples that would sell in the $1 million-to-$10 million range.

–In other words, the market is becoming increasingly bifurcated between trophy buyers and bargain hunters (or speculators). At least last month, there were fewer of those boring in-betweeners who just want “regular” expensive art.