Generative and Artificial Intelligence art might sound like something straight out of a science fiction film. However, the idea that an artwork can be created by a machine, devoid of the human hand, or created by autonomous and algorithmic systems, isn’t far-fetched at all. For the past six decades, artists have been experimenting with technology, creating computer art, media art, video art, and digital art, and eventually tokenizing artworks on the blockchain.

Now, Midnight Publishing Group’s first NFT auction, “ArtNFT: Beginnings,” is centered on the historical trajectory of digital art and its touch points with the development of NFTs. Read on to learn about seven artists, including Dmitri Cherniak, Vuk Ćosić, and Georg Nees, who have been at the forefront of Generative and A.I. art movements, and whose works are live for bidding through December 21 in “ArtNFT: Beginnings.” 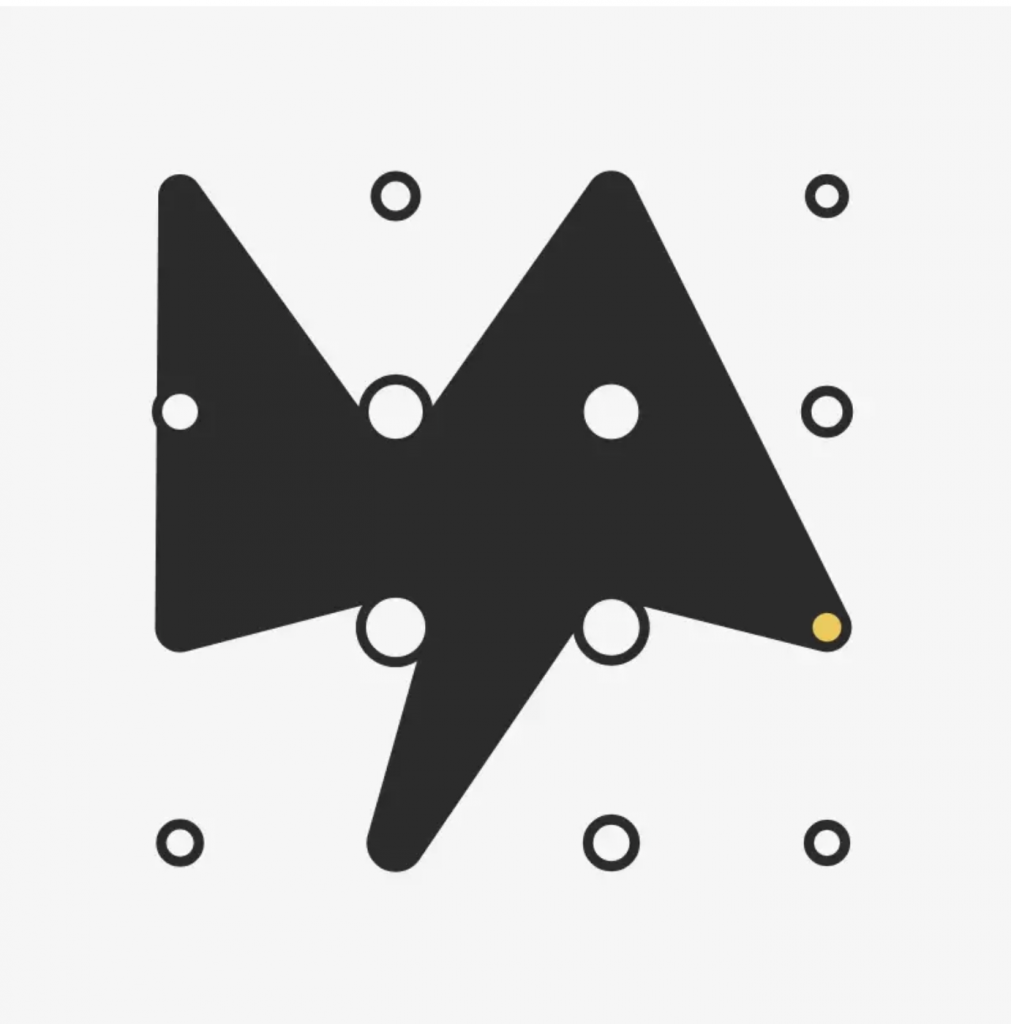 “Automation is my artistic medium. Hand coded goods,” Dmitri Cherniak has written. On January 31, 2021 the Canadian artist made a splash with the launch of his “Ringers” project on Artblocks, a program that hosts generative content on the Ethereum blockchain.

The series, which is capped at 1,000 unique NFTs, is based on the premise that there are an almost infinite number of ways to wrap a string around a set of pegs. “Ringers” are a computer-generated algorithmic series, created from Javascript code, and each work has its own unique transaction hash. Minimal in their aesthetics, “Ringers” are valued for qualities such as peg count, sizing, layout, background, wrap orientation, wrap style, scaling, body color, peg style, and extra color. Ringers #887 has a woven wrap style and a solid-filled black body which accentuates its visually striking, angular pattern. Notably, Ringer #109 sold for 2,100 ETH ($6.9 million at the time), making it the most expensive Art Blocks NFT sold to date.

Cherniak got his start in crypto in 2014, and while he has been probing the implications of blockchain-based generative art for years, it was not until 2019 that he began sharing his own work, remaining dedicated to algorithmic diversity in his practice. 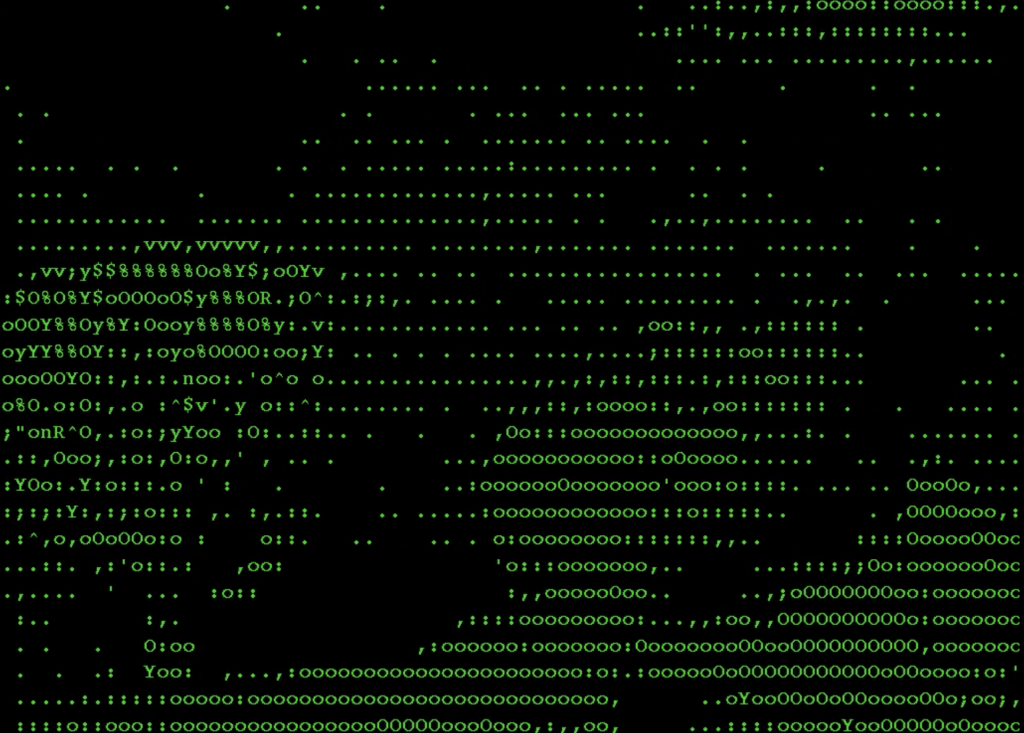 Slovenian artist Vuk Ćosić is best known for his role as a founding pioneer of net.art, an internet art movement that started in 1994, and for his early application of encoding technology to visual graphics. Ćosić seeks to sidestep the traditional methods of creating art by utilizing the digital sphere, however he emphasizes that the most high-tech technologies need not be applied. This artistic approach drove many of his projects, including the ASCII Art Ensemble, which features various moving images and videos in the American Standard Code for Information Interchange (ASCII) characteristically formed by numbered coding patterns.

Emblematic of Ćosić’s pioneering spirit, Deep ASCII is an NFT conversion of his 1998 work of the same title, which depicts a scene from the pornographic film Deep Throat rendered in ASCII. 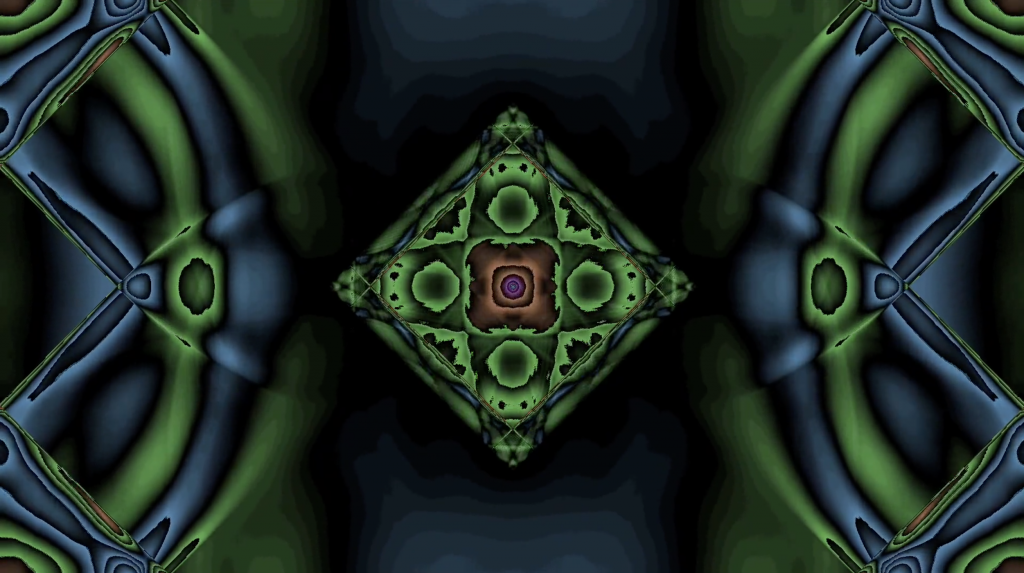 Quantum Leap by Jennifer and Kevin McCoy is the longest-term generative artwork, evolving over a three year cycle. The code-based NFT is inspired by the artists’ 2014 work Quantum, the first ever artwork to be tokenized on the blockchain.

Constantly moving through changing states, the NFT draws upon art-historical and scientific theories to evolve and spawn new versions of itself in real time, multiplying in a manner akin to the current ecosystem of social and technological innovation. Fast-paced and unpredictable, the work’s title refers to a physics theory that strives to answer questions about the initial phases of the universe.

Primordial Star 2 is the second from a series of eight unique tokens which involve layers of code-based systems that interact to produce an expanding mandala-like digital animation, inspired by the consistently shifting life cycle of stars. Over the token’s three-year cycle, it will spawn offspring—new stars and descendant tokens that will possess their own parameters and unique visual rendering software patterns. 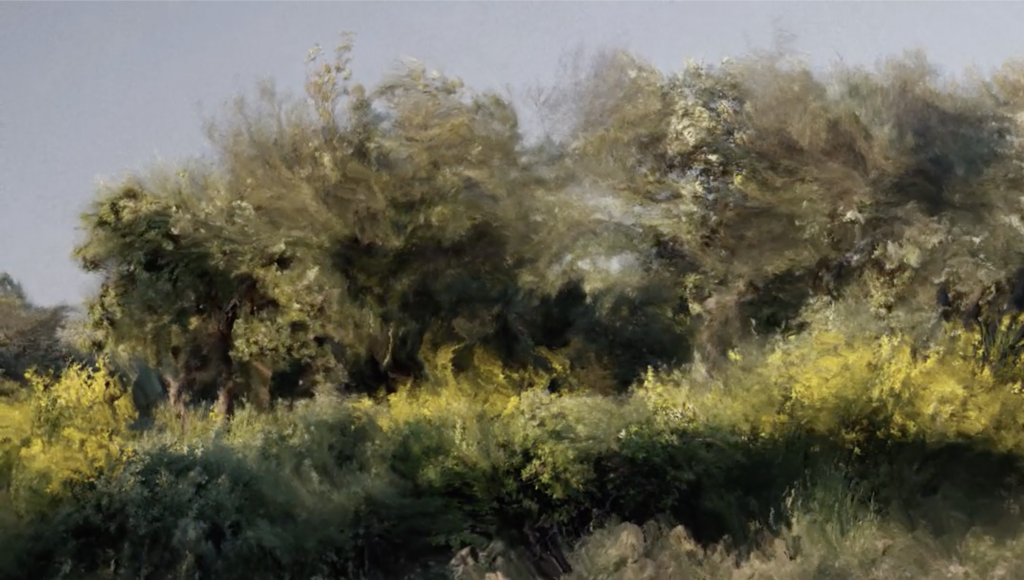 Italian artist Davide Quayola sees technology as complementary to classical religious iconography and traditional landscape imagery. Most often referred to as Quayola, the artist works with many mediums, including audiovisual performance, video, sculpture, and works on paper. PP_F_024_2 is an NFT that draws inspiration from Impressionism and suggests a new understanding of the natural world through collaboration with technology. The work is an algorithmic composition that blends opposite realms: nature and technology, representation and abstraction, and, ultimately, the human and machine.

Inspired by the work of Vincent Van Gogh, Quayola visited the countryside in Provence some 130 years after the Dutch artist to capture some of the same iconic natural compositions. Quayola uses custom software to transform his source videos into algorithmic animations resembling real paint. PP_F_024_2, for example, was generated by the analysis of ultra-high-definition videos. 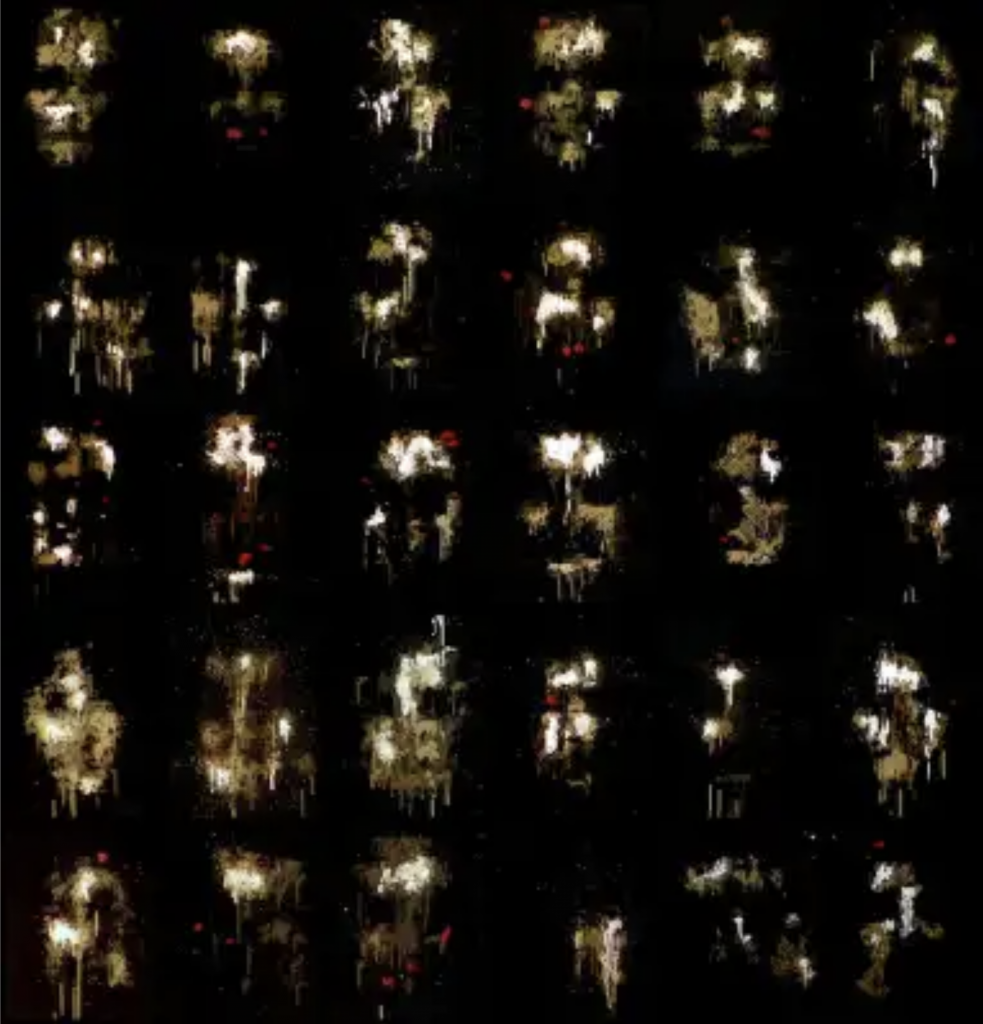 Pindar Van Arman is an American artist, roboticist, and pioneer of digital art. Van Arman has been building robots for use in his artistic practice since 2015, and he has programmed software applications such as CrowdPainter, bitPaintr and CloudPainter. Using Artificial Intelligence (AI) software, Van Arman’s robots hold a brush and paint patterns directed by an algorithm.

A pioneer of digital art, Pindar Van Arman is an American artist and roboticist. Van Arman has been building robots for use in his artistic practice since 2005 and has programmed CrowdPainter, bitPaintr and CloudPainter. All based on Artificial Intelligence software, Van Arman directs his robots to hold a brush and paint a pattern directed by an algorithm.

Emerging Faces is the product of a collaboration between Van Arman and Robert “3D” Del Naja, a British street artist and a member of the electronic band Massive Attack. This work—an NFT accompanied by a physical work—combines Del Naja’s signature style with Van Arman’s technical coding abilities. A.I. layered the textures and colors of Del Naja’s paintings to create a composite idea of its dominant characteristics, as an exploration of facial recognition software. 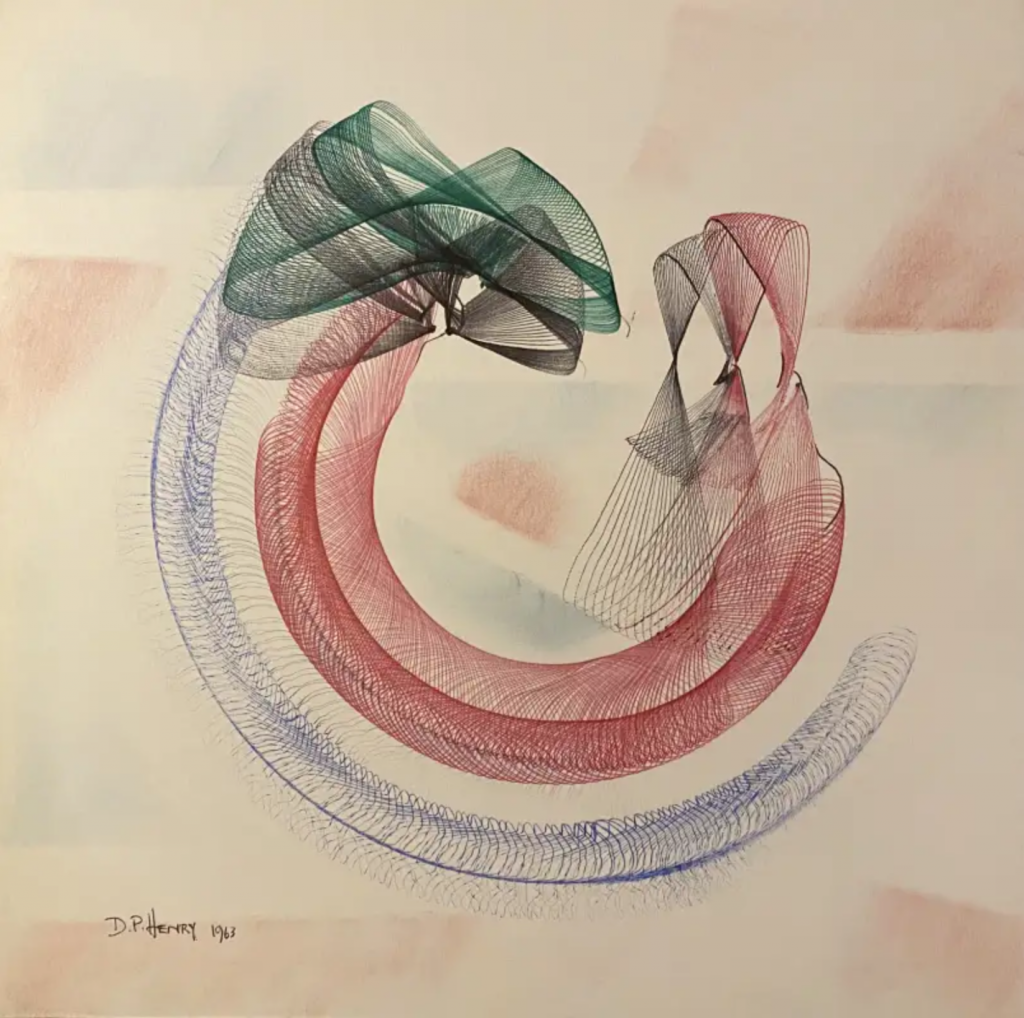 #287 is a physical artwork, created by one of Henry’s drawing machines in multi-colored biros on paper.