In celebration of Martin Luther King Jr. Day, the city of Boston has unveiled its newest monument, a Hank Willis Thomas sculpture that now sits on the grounds of Boston Common, the nation’s oldest public park.

Titled The Embrace, the bronze statue is a pair of larger-than-life interlocking arms, inspired by a photo of King and his wife, Coretta Scott King, hugging after he won the Nobel Peace Prize in 1964. Representing the mutual love and support that made the Kings’ activism possible, it is 40 feet wide and 20 feet tall—about two stories high—and weighs 38,000 pounds.

Cast in 609 pieces from a 3D-printed model at the Walla Walla Foundry in Washington state, the massive work was fabricated, transported across the country, and installed in Boston against all odds.

“This was not supposed to happen—literally, there was a global pandemic in the middle of us trying to do a piece called Embrace,” Thomas said during the opening ceremony for the monument, which has been in the works since 2016. (His design, with MASS Design Group, was selected from 125 proposals.) 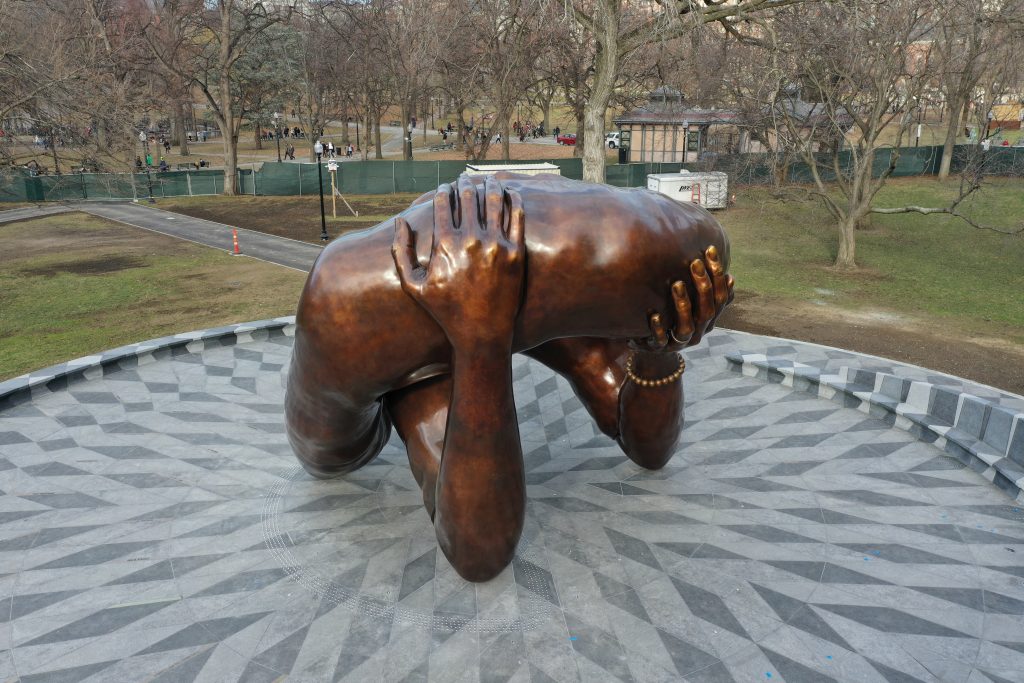 A leader in the Civil Rights Movement known for his nonviolent activism, civil disobedience, and powerful speechmaking, King was assassinated in April 1968. In recognition of his birthday, January 15 has been celebrated as a federal holiday on the third Monday of every year since 1986. He would have been 94 this year.

But the new memorial also highlights the contributions of Coretta Scott King to the Civil Rights Movement—which she was involved in prior to meeting her husband, and remained a leader of after his untimely death.

The city of Boston is an important part of the Kings’ family history, as they met there as students in 1952, just a year before their marriage. King returned in April 1965, addressing a joint session of the Massachusetts legislature about the importance of segregation. The next day, he gave a speech at a Freedom Rally on Boston Common, after leading some 22,000 activists in a Civil Rights march from nearby Roxbury. 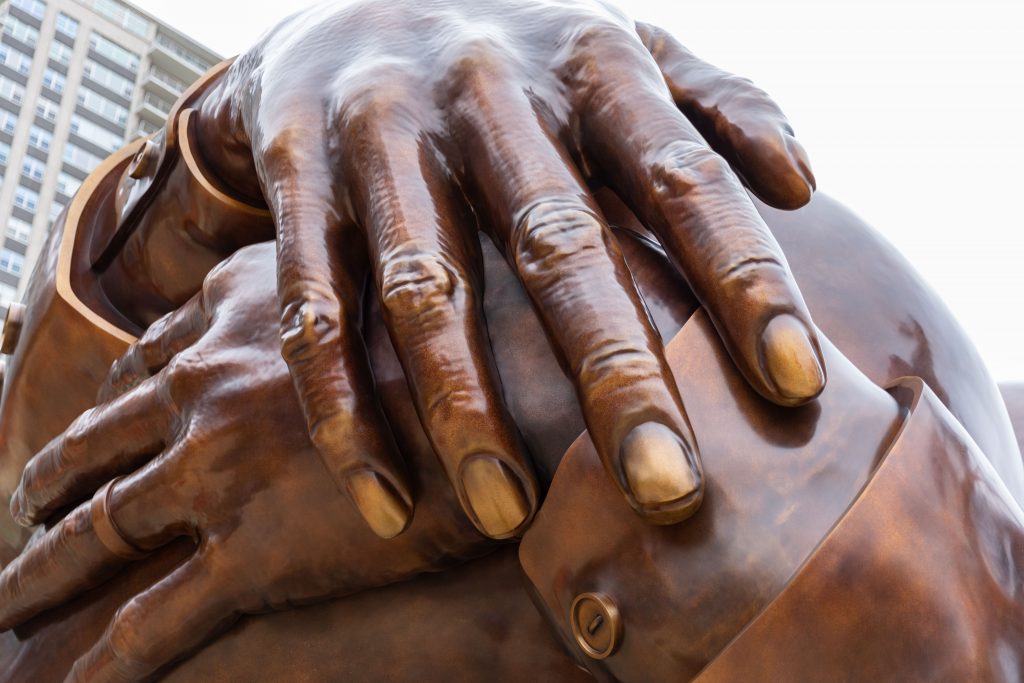 “Little did I imagine that such a day was possible when I walked through this same Boston Common as a student 10 years ago,” King told the crowd. “This will go down as one of the greatest days that Boston has ever seen.”

That history was honored today at an over-two-hour event marking the installation of The Embrace, which sits at the center of the new 1965 Freedom Plaza, designed by MASS Design Group. The floor features bronze name plates amid the titles honoring other Civil Rights activists who marched with King, nominated by community members.

The city of Boston hopes the work will become a major tourist attraction akin to the Statue of Liberty, with Massachusetts Congresswoman Ayanna Pressley telling the assembled crown that people will travel from all over the world to pay tribute to the Kings and see the “profound work of art—like their love, a masterpiece.” 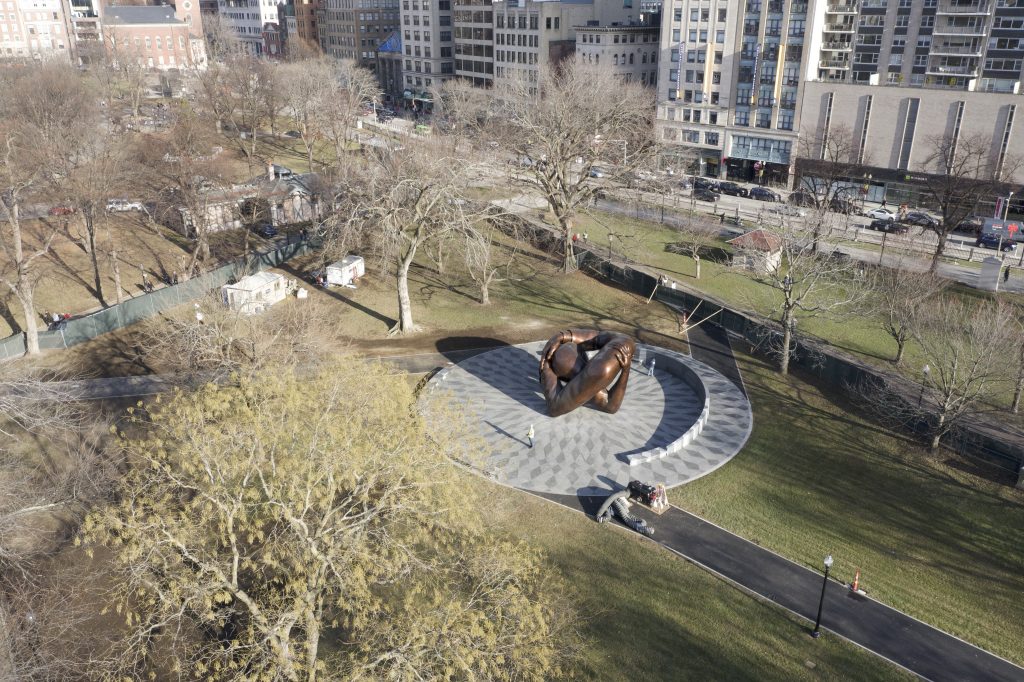 The program featured speeches by dignitaries Boston Mayor Michelle Wu, Massachusetts Governor Maura Healey, and former Governor Deval Patrick, as well as Imari Paris Jeffries, executive director of Embrace Boston, the nonprofit that spearheaded the project—he spoke with tears in his eyes, overcome by the moment.

But it was King’s only granddaughter, 14-year-old Yolanda Renee King, who stole the show, speaking after her parents, Martin Luther King III and Arndrea Waters King. Clearly an impressive young orator in the making, Yolanda was unruffled even when the wind nearly blew away the notes of her prepared speech.

And when NBC10 Boston anchor and the event’s master of ceremonies Latoyia Edwards asked the young girl to tell the crowd more about herself, Yolanda spoke off the cuff in impassioned tones about continuing her grandparents’ work striving for justice no matter what, and praised the statue memorializing their legacy. 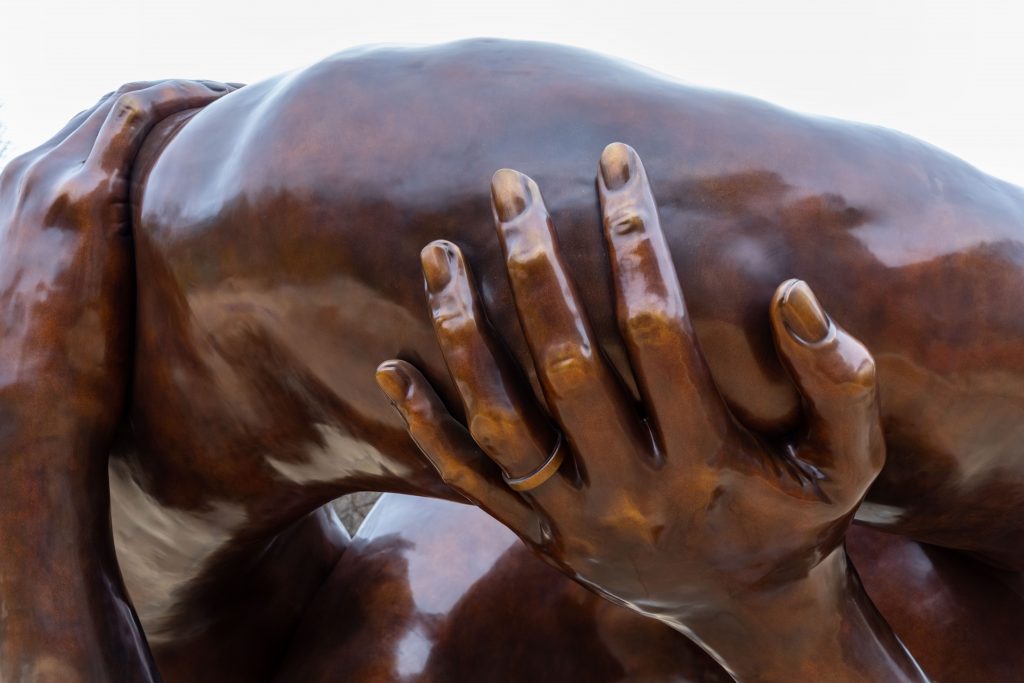 “This is almost like love 360, because this monument is dedicated to their love, and we really need more love in this world,” Yolanda said.

Thomas agreed, embracing—pun intended—Love 360 as an alternative title for the work, which allows viewers to stand inside the arms, as if encircled by a hug. He hopes the monument will be seen a manifestation of the Kings’ love and the power of that emotion. It is also a visible symbol of the Black experience and Black joy, despite generations of struggle faced by the Black community.

“It’s really about the capacity for each of us to be enveloped in love,” Thomas said.