It’s only a few weeks into 2023, but Etsu Egami can already confirm that it has been a great year.

The 28-year-old artist just returned home to Chiba, Japan, after her sold-out solo exhibition soft-opened Whitestone Gallery’s new space in Singapore during the city’s art week; her works on show at the Taiwanese gallery’s booth at the recent ART SG also found eager buyers. She is now back in her studio in her hometown, busy preparing for a series of upcoming museum projects and showcases locally and abroad. Indeed, Egami is already looking at a full schedule in the coming weeks and months, and her eyes are set on the global stage.

“I want more Japanese artists, woman artists, and Asian artists to be seen in the international art world,” Egami said of her strong motivation to go global, speaking to Midnight Publishing Group News via a video call from her studio.

While there have been a lot of great artists from Japan and Asia throughout history, she noted, the number of them known internationally remains small. Having featured in exhibitions for nearly a decade, and reaching notable acclaim—including a spot on the Forbes Asia 30 Under 30 list in 2021—Egami’s fierce determination to develop a career outside of Japan “is only natural.” 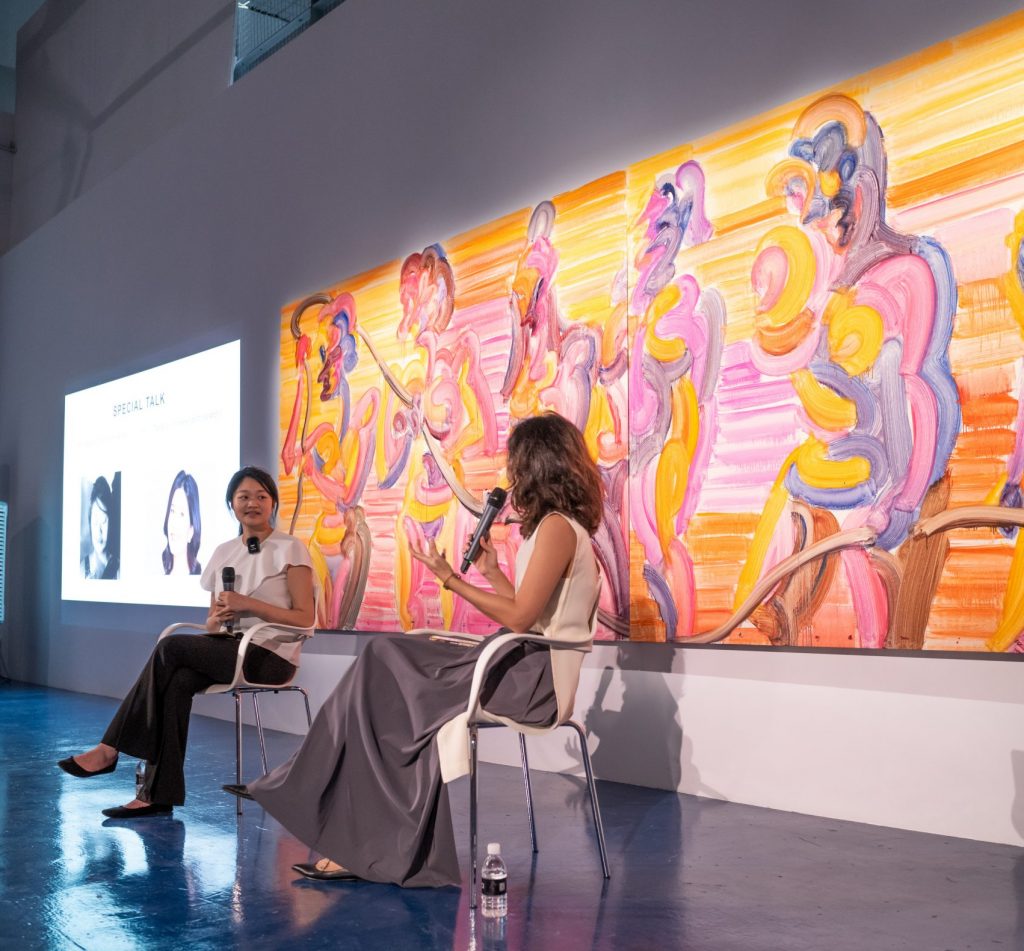 By the sounds of things (and with a look at the data), going global is going to be a very achievable new year’s resolution—her hard work is already paying off. Egami’s paintings, created with thick lines of colorful brushstrokes, have amassed a solid following since her debut in 2015; she has shown paintings in major art cities from Paris and New York to Seoul, Beijing, and Taipei.

Prices for her paintings floating in the secondary market have skyrocketed since 2021, making her one of the art market’s fastest-rising stars from Asia, widely recognized as a key artist of the third-generation postwar Japanese art. Her work has already entered the collection of institutions internationally, including CAFA Art Museum in Beijing, Moscow’s Garage Museum of Contemporary Art, and E-Land Foundation in Seoul.

But Egami’s rise in the market also means that she has also become a target of flippers—a fact that upsets the artist. According to data from the Midnight Publishing Group Price Database, most of her top 10 auction records were for works that had a three-year hold or less, including her current record, which stands at HK$2.9 million ($366,921; all sale prices include fees), for a 2021 diptych sold at Holly’s International (HK) Auctions’s sale in May of last year. This was followed by the sale of painting Rainbow-2022-t-10 at a Holly’s Hong Kong auction in November 2022. The work, which achieved HK$1.3 million ($168,931), had been exhibited at Tang Contemporary’s Seoul space only a few months prior. On Saturday, January 28, Japan’s SBI Art Auction will put a small 2021 painting up for sale. (The auction house gave the work a rather low-seeming presale estimate of ¥700,000 to ¥1.3 million ($5,100 to $9,400), but SBI appears to have a track record of holding their estimates to an approachable level.)

“[My artworks] are like my children, so I hope the work can stay with people for much longer,” Egami said when asked about how this heated secondary market affects her. She is working with her galleries to try to keep things under control: they have imposed a five-year non-selling agreement, and are extremely carefully to weed out uncommitted collectors.

She is grateful for the attention, though, and hopes that it is sustainable. “I really appreciate that people love my work and collecting it,” she said. “I hope people can see the messages in my work, why I make these works, and the stories behind them. I also hope more people can spend time with my work, allow their imagination to flourish, and show my work rather than just keep them in the storage. I want people to focus on my art.” 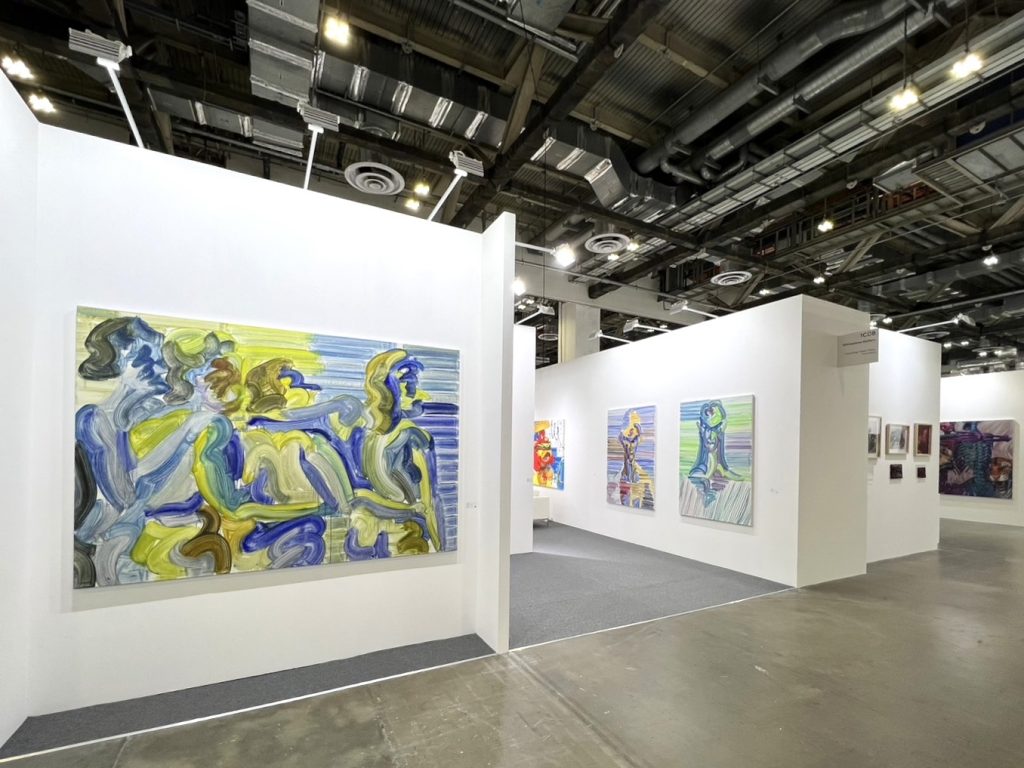 To understand Egami’s art, one must trace her practice back to her high-school days. Growing up about 25 miles east of the center of Tokyo, in 2008, she experienced a transformational change when she was exposed to Chinese contemporary art during the Beijing Olympics.

“It was a big shock to the Japanese art scene,” recalled Egami of the televised Olympics, which were hugely popular in Japan. It widened her view—she had grown up loving the work of Japanese modern painters such as Sotaro Yasui and Ryuzaburo Umehara. But, for a long time, she felt that there has been a gap between the Japanese pre- and postwar art, and the exposure to Chinese contemporary art was a light-bulb moment. “It seemed to bridge this gap,” she said.

She studied oil painting in China, at the Central Academy of Fine Arts (CAFA) in Beijing, before eventually completing her MFA there in 2019, studying under Chinese painter Liu Xiaodong, one of the key Chinese contemporary artists who was among the art market darlings about a decade ago when the genre was the most highly sought after from east Asia.

When she first studied abroad (in China, but also in Germany), she noted that experiences of culture shock and the miscommunications of being a foreigner deeply impacted her, especially those that went beyond words. Non-erbal cultural cues and subtexts puzzled her the most. “I realized that it was not a problem of language,” she noted. “Language is a tool of communication, but at the same time, it’s also the barrier.”

This miscommunication became a major source of inspiration in her paintings. Her style further evolved during a period spent in New York in 2020, as part of a Japanese governmental residency for outstanding artists. During those months, she witnessed the turbulent lockdowns, the Black Lives Matter movement, and the rise of targeted attacks against Asians.

These revelations brought about her ongoing “Rainbow” series. Some of the works from this series have sold well at auctions, according to Midnight Publishing Group Price Database records. “The importance of diversity and coexistence gave me the inspiration of the rainbow,” she said. “They are lines that do not mix with each other, but they are in various colors running parallel to each other. This is my single dream and hope, and has become my painting language.” 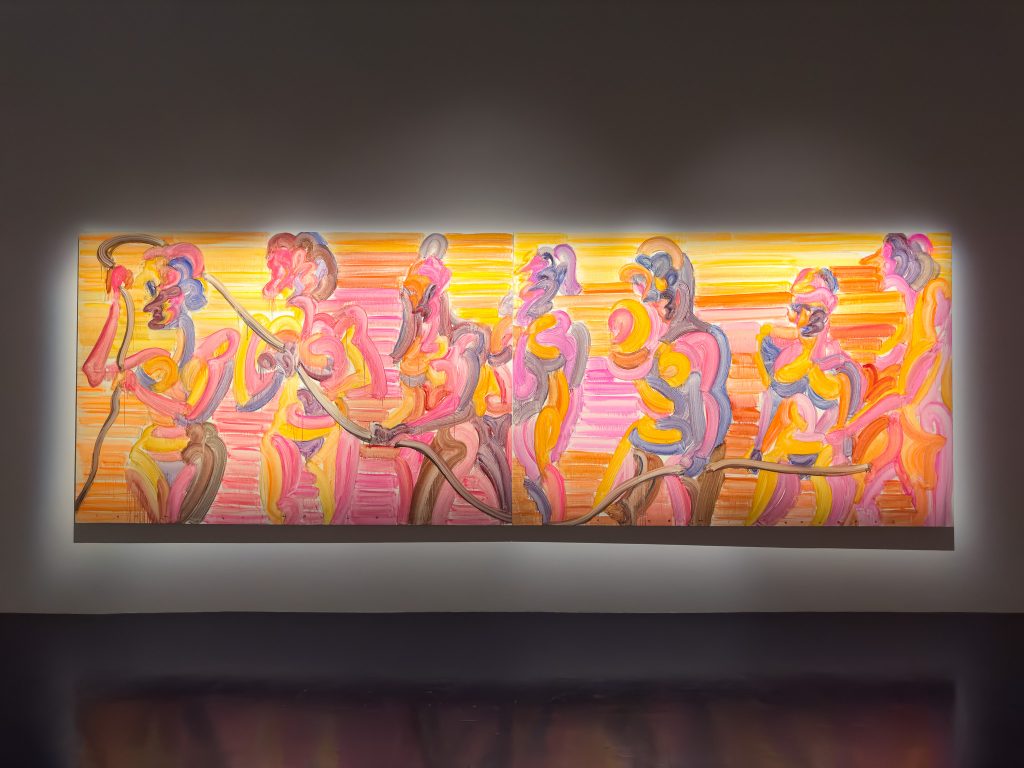 Etsu Egami, Rainbow-2022-W-42, on show at the artist’s solo exhibition “Incessant is the change of water where the stream glides on calmly: the spray appears over a cataract, yet vanishes without a moment’s delay” at Whitestone Gallery Singapore. Courtesy of Whitestone Gallery.

This year will likely be a turning point. For one, a striking monumental diptych from her recent Singapore show with a title inspired by Japanese classical text Hōjōki, has been acquired by a foundation that is building a yet-to-be-announced private museum in Singapore. The work is a visual ode to honor the primitive nature and spirituality of feminine power through the artist’s signature brushstrokes in a warm color palette.

“I’m very happy about this,” the artist said of the major acquisition, adding that she also met a lot of collectors from the region during her time there, including those from Malaysia and Indonesia. “It’s nice that my work can be placed in a collection that will be open to the public,” she added.

And even though it is largely private buyers chasing her paintings, Egami’s work will nevertheless reach a wider audience in the coming year. The painting Rainbow-2021-T-1—the work that set her auction record—is included in the third edition of the China Xinjiang International Art Biennial, which opened earlier this month. She is also working to expand on her medium, and plans to spend a residency creating a site-specific audio-visual installation for a group show set to open in late February at the Museum of Modern Art in Japan’s Gunma prefecture. For this project, the artist researched the history of Daruma dolls, modeled after a Buddhist monk who was widely known as the founder of Zen Buddhism.

Also in the pipeline are institutional exhibitions, one planned for London during Frieze week next fall, and another at a yet-to-be-announced museum in Shanghai; at both, she plans to stretch beyond painting, including experiments with photography, sound, and sculpture. Her work will also make a fair presence at Art Basel Hong Kong and Art Geneva, both with Tang Contemporary, according to the artist.

But Egami is happy to let her representatives take care of sales while she delves deeper into her art. “The galleries will be handling the market side of things so that I can focus on my work that questions about society or my feelings,” Egami said. “I want to try something new.” 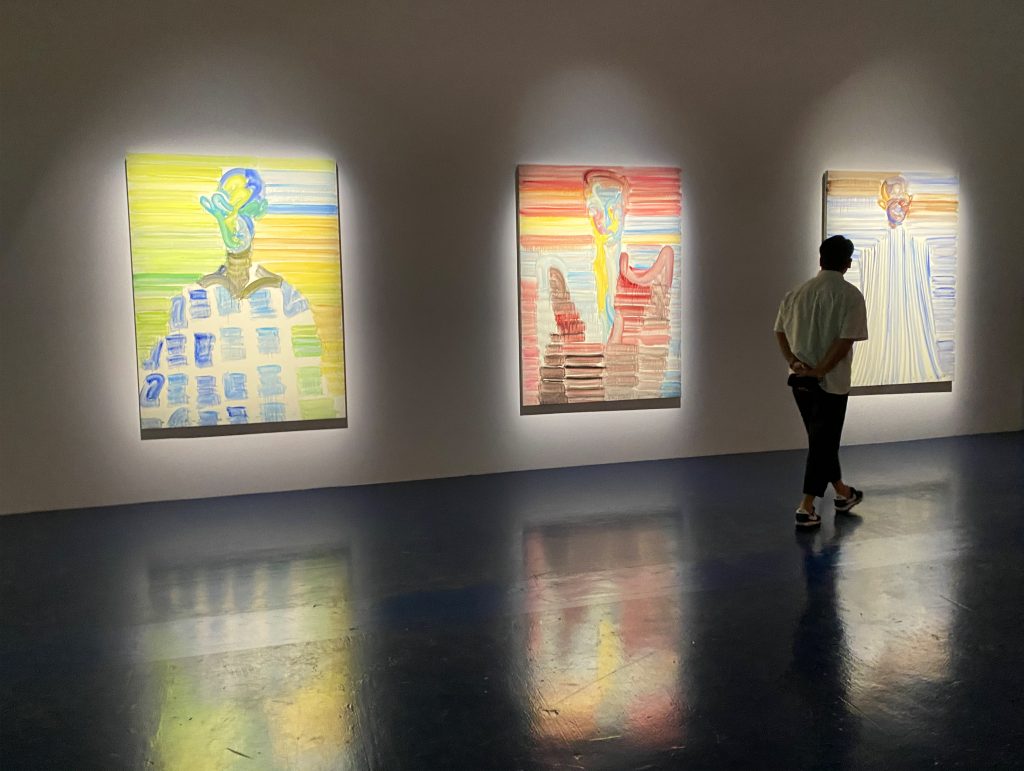 Installation view of “Incessant is the change of water where the stream glides on calmly: the spray appears over a cataract, yet vanishes without a moment’s delay,” solo exhibition of Etsu Egami at Whitestone Gallery Singapore. Courtesy of the artist.