If you love baseball, museums, graphic design, and supporting charity, Gabi Manga has the fashion accessory for you.

It’s called the Mets Hat, and it’s a blue and orange baseball cap—the colors of Major League Baseball’s New York Mets—featuring a version of the Metropolitan Museum of Art logo tweaked to read “The Mets” rather than “The Met.”

“It’s this kind of cheeky clever thing to show that you’re into both the arts and the Mets,” Manga told Midnight Publishing Group News. “I love puns, and I’ve always been into uniforms and design.”

This mashup of two great New York institutions has been periodically available for sale since 2017, with all the proceeds benefiting charities. To date, Manga has raised some $15,000 to benefit Planned Parenthood and RAICES, a non-profit providing legal services to refugees and immigrant families in Texas.

I first learned about the Mets Hat from Midnight Publishing Group News managing editor Pac Pobric, who is one of the roughly 800 people lucky enough to currently own one of these coveted hats.

That was in August, and I am still on the waiting list to buy one. 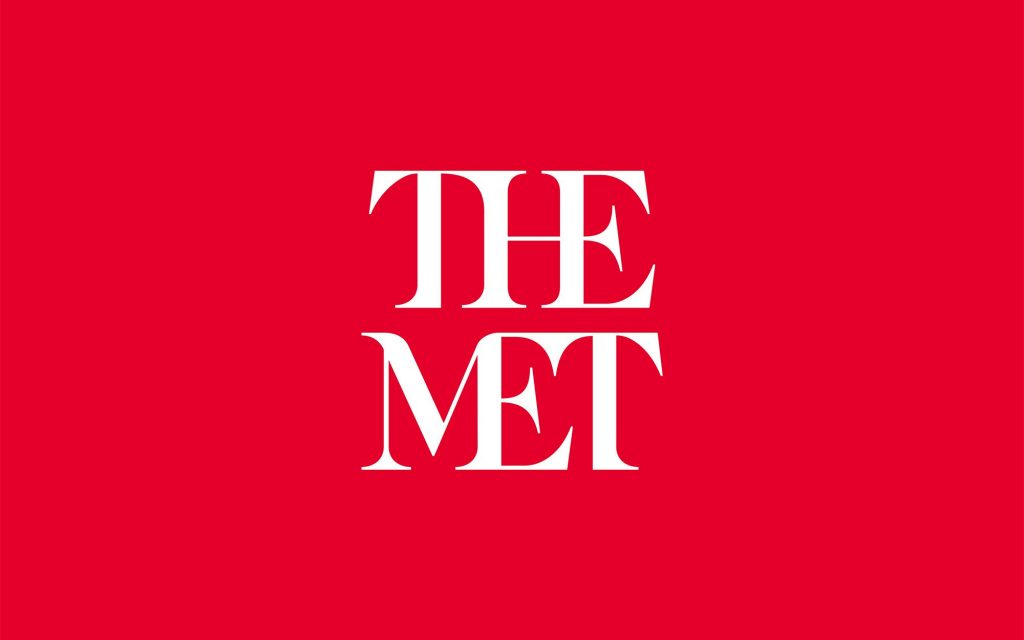 But Manga is promising new stock on April 1, just in time for opening day—the day, as any good Mets fan knows, when the team is perhaps most likely to notch a win. (The team may only have two championships to its name, but it does have the best opening day winning percentage in any of the four major sports at .661, including 39 victories in their last 51 openers!)

A 32-year-old freelance writer who also works as a producer for an educational app, Manga grew up as a Red Socks fan in Boston, but his mother was born in Flushing.

“She has many stories about going with her dad to see the Mets lose,” Manga said.

So when he moved to New York seven years ago, embracing the Mets as his new hometown team was a no-brainer.

Manga was inspired to create the Mets Hat when the Met unveiled its current logo in early 2016. The design, by Wolff Olins, a brand consultancy firm based in London, New York, and San Francisco, was widely panned for its overlapping letters. One Twitter user described it as “the Human Centipede of branding,” and it inspired numerous mocking revisions (including at least one play on the team logo).

Lisa Smith, creative director at Wolff Olins at the time, wasn’t surprised by the backlash. “Do people like change? Especially in the design world? History would say no,” she told Midnight Publishing Group News in an email. “In the Met’s case, everyone and anyone jumped on the bandwagon of fierce hate for the change, but the irony was to propel the brand into popular culture and have it be talked more about than ever.”

“I like the logo personally. I think it’s cool,” Manga said. “I was working with a bunch of graphic designers when the logo came out, and I remember that side of the office being abuzz since it was such a controversial design.”

He pestered a graphic designer friend to tweak the logo to add an “s,” and a friend who designs for Supreme to create the schematic to have it manufactured. Thus, the Mets Hat was born.

The hats are produced locally by a Queens company called Winner Caps, with Manga releasing batches of about 250 a couple of times a year. As demand has grown, he set up an online order form (instead of selling through Instagram DMs), but still handles the packaging and shipping from his Brooklyn living room. (When the hat was first released, Manga was living at noted arts haven 83 Canal Street.) 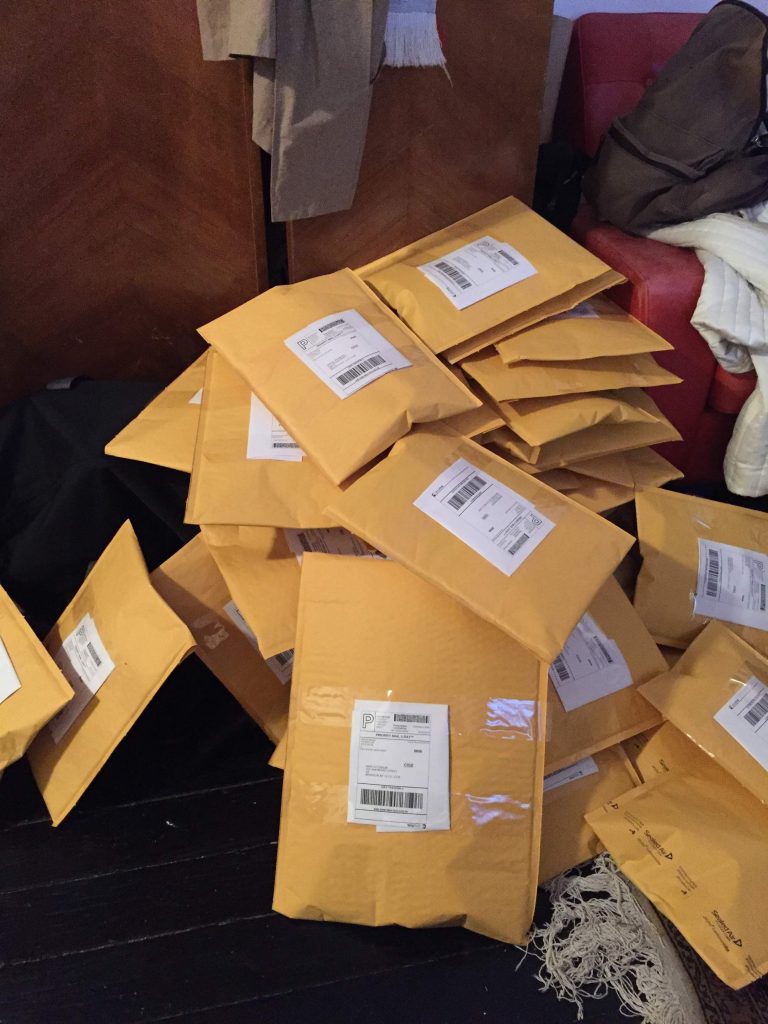 Gabi Manga’s apartment ahead of a shipment of the Mets Hat orders. Photo courtesy of Gabi Manga.

Among the first customers was Smith, who learned about the hat from a colleague who had worked on the project. “I laughed so much. There were so many memes at launch of the Met logo, so I had to buy one!” she said. “I love when identities get adopted, adapted, and combined with other brands.”

The hat isn’t authorized by the team or the museum, but it does appear to have the unofficial blessing of both organizations.

“It’s really smartly designed,” Ken Weine, the chief communications officer at the Met, told Midnight Publishing Group News. “We feel very good about our logo and how it is communicating our mission and values—and the baseball team in Queens, which I love and periodically breaks my heart, they’ve also done a great job of managing their logo.”

And while Midnight Publishing Group News couldn’t reach the Mets for comment, Manga allowed us to view correspondence with Sophia Cohen and Josh Cohen, the children of new team-owner Steve Cohen, one of the world’s biggest art collectors.

As soon as Cohen bought the team, “I was like ‘oh man, we got some art lovers who are owning the Mets now. I bet that dude has seen the hat!’” Manga said.

Both Cohen children have purchased the hat, and Manga says he is speaking with Josh Cohen, who now works for the team, about the possibility of making the project official. “What I really want to do is to scale this up and have the Met and the Mets collaborate on this and actually sell this themselves,” he said. “How cool would it be to buy this at the Met gift shop, or at a Mets’ game?” 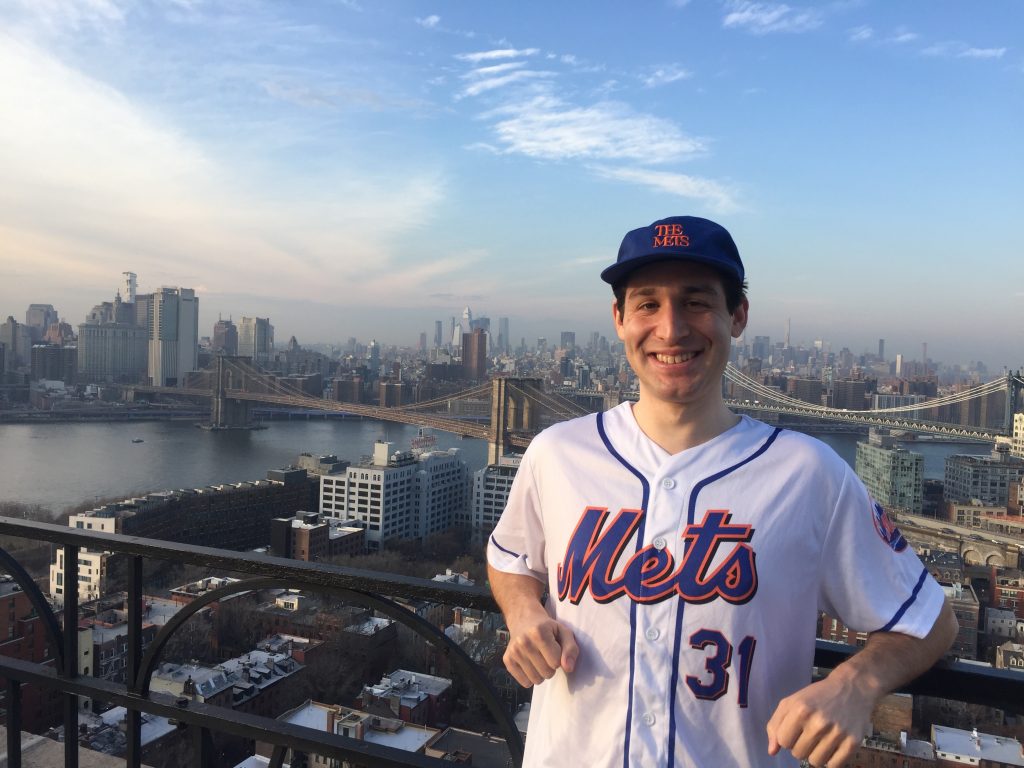 Gabi Manga, creator of the Mets Hat, wearing the baseball hat celebrating both the New York Mets and the Metropolitan Museum of Art. Note the Mike Piazza jersey. Photo courtesy of Gabi Manga.

One slight stumbling block is the the charity component. “Our store is to generate funds for the nonprofit institution that is the Met,” Weine said.

But he is definitely open to a Met–Mets collaboration. “What this obviously calls for is that we need both Mr. Met and [two-time Cy Young winner] Mr. deGrom to visit the museum—because it’s just not possible for us to bring over the Temple of Dendur or the Van Gogh to Queens,” Weine said.

He hasn’t spotted any Met staffers wearing the hat yet—although Manga says he knows people who work there have purchased it—but expects that to change. “I love the hat and will be getting it as a gift for many,” Weine said.

If the Met were to officially embrace the Mets Hat, it would offer a counterpoint to the official Yankees hat currently for sale at the Museum of Modern Art in Midtown. The MoMA-branded Yankees hat featuring both organizations’ logo came out in 2017, in conjunction with “Is Fashion Modern?,” the museum’s exhibition on 111 iconic fashion items, including a New Era Yankees cap.

“Their hat isn’t even clever,” Manga said. “I think it’s a complete derivative of the idea that I did.”

A representative for MoMA told Midnight Publishing Group News that it began development of its Yankees hat in January 2017, without knowledge of the Mets hat. The museum has sold over 50,000 of them to date. 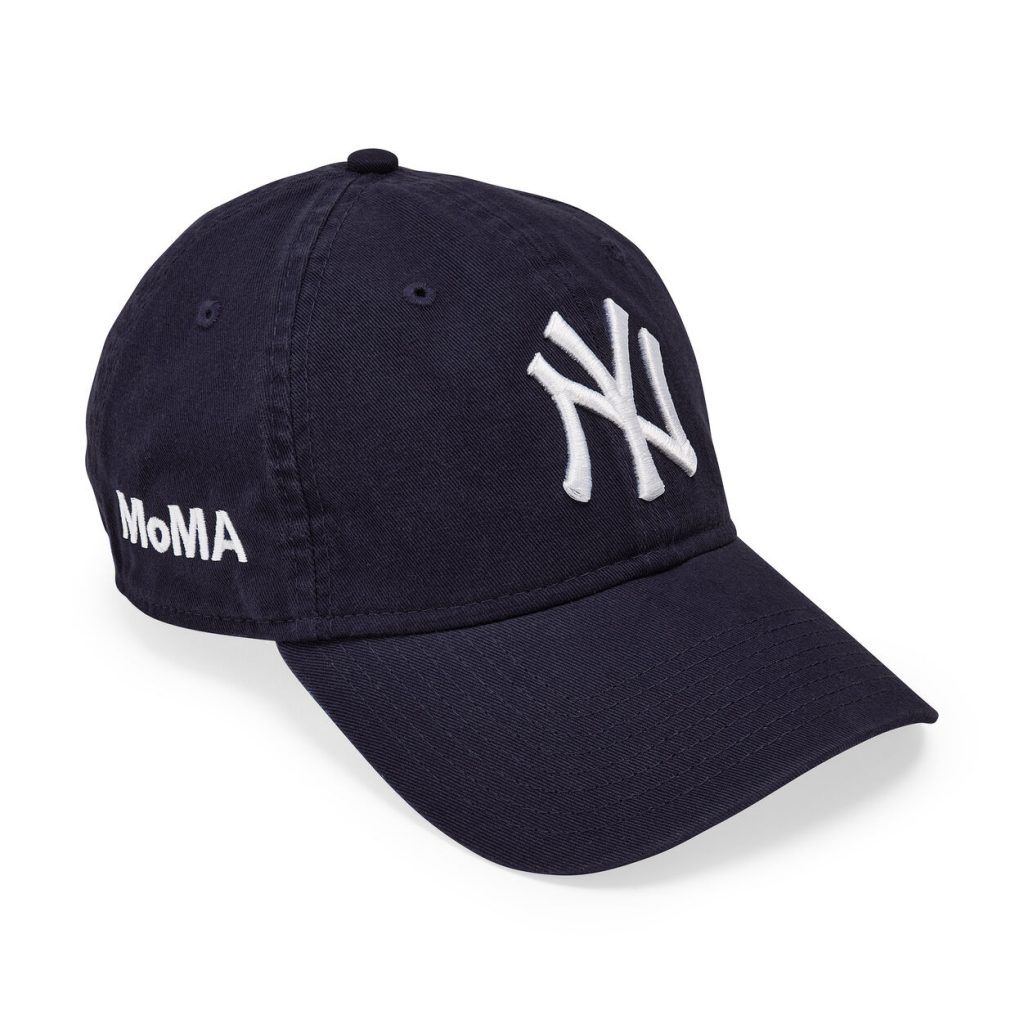 The MoMA Yankees cap, from New Era. Boo! Photo courtesy of the Museum of Modern Art.

Regardless, Manga feels that the Mets are a better fit for an art museum.

“Beyond the logo being a clever mishmash, there is something quite tangible about the connection between the Mets and the arts,” Manga said. “The Mets are very much the more artistic, DIY, punk kind of team. The Yankees win, and that’s what they do. It’s easy to be a Yankees fan. If you’re an artist, if you’re in a band, if you’re trying to be creative, if you’re trying to make it in that world, you lose a lot.”

“Being a Mets fan goes with the whole narrative of being a New Yorker. To live and love in New York, you have to put up with a lot of shit, and you don’t always win. A lot of time you lose,” he added.

Weine wouldn’t say if he agreed.

“We are an encyclopedic museum and we welcome fans of all baseball teams,” Weine said. “But there is nothing better or more important than people bickering about what type of person or community should be more aligned with one team or another—that is a great New York tradition.”