Holy Botticelli! – A portrait of a young man by Sandro Botticelli just sold for more than $90 million at Sotheby’s, making it one of the most expensive Old Masters ever.

An Underwater Treasure Trove – Marine archaeologists discovered an ancient shipwreck off the coast of Greece filled with treasures from Spain and Tunisia.

What Would Charlotte York Do? – As the reboot of Sex and the City approaches, amateur screenwriter Katie White concocts some (very plausible) art-world storylines for everyone’s favorite Upper East Side gallerist.

Art Fair Musical Chairs – More fairs have rescheduled dates due to the ongoing pandemic, including TEFAF Maastricht, which will take place in September.

Cheech Marin’s Museum Approved – The actor’s forthcoming Chicano art museum got the green-light from city officials, bringing it closer to becoming a reality.

Pussy Rioters Arrested – Three members of the activist artist group were arrested during mass demonstrations in Russia protesting the jailing of Aleksei Navalny.

Inside Putin’s Palace – Part of what drove the Russian protests was Navalny’s YouTube essay on Putin’s secret palace, which he called a “new Versailles.” Here’s what’s in it.

A Bizarre Art Thief, Foiled – A man who threw a stolen painting into the Isabella Stewart Gardner Museum after smashing a glass window has been arrested in Boston.

Centre Pompidou to Close – Paris’s famed contemporary art museum will close from 2023-2026 for a complete renovation.


Art Industry News is a daily digest of the most consequential developments coming out of the art world and art market. Here’s what you need to know on this Friday, January 22.

Antwaun Sargent Joins Gagosian as Director – The 32-year-old New York-based curator and writer will join the mega-gallery as a director. The first exhibition organized by the author of The New Black Vanguard: Photography Between Art and Fashion (and former Art Angle guest) will look at “notions of Black space.” It is planned for later this year at Gagosian’s West 24th Street location. Of the mega-gallery, Sargent says, “It’s a place where you come and view art, but it’s also a place where discussion happens.” (New York Times)

Fraudster Cheated Gallery Out of Millions, Per Court – Gerald Smith is in the midst of a 10-week commercial court hearing in which claimants are looking to obtain tens of millions of pounds’ worth of assets they say were derived from the profits of his scams. Among those looking for restitution: London’s Halcyon Gallery, which sold Smith a portfolio of art by Renoir, Rodin, Degas, Matisse, and Dali worth $10.1 million in 2014. Smith was first convicted in 1993 over the theft of £2 million from a pension fund and again in 2006 for stealing £34 million from an IT company. (The Standard)

Houston Officer Arrested at Capitol Just Wanted to See the Art – We read Playboy for the articles, we patronize strip clubs for the food, and we apparently storm the US Capitol in order to take in the old pictures of important American figures. At least, that’s what Houston police officer Tam Dinh Pham suggested to authorities after he was captured in Facebook photos inside the building on January 6. Pham, who said he was in DC for his wife’s business trip, told the FBI that he spent about 15 minutes inside the Capitol during the riot, where “he looked at the historical art on the walls and took photographs and videos inside.” (Raw Story)

The German Stock Market Teams Up With the Städel Museum – The Deutsche Börse, which owns and operates the Frankfurt Stock Exchange, is teaming up with the city’s Städel Museum. The four-year partnership will contain a “high annual sponsorship sum” and will allow the museum to provide special education, events, and access to “employees, customers, and business partners of the stock exchange.” (Monopol)

Unseen Dog Painting by Manet to Hit the Auction Block – It’s a good painting of a very good dog. A composition that Édouard Manet dashed off in 1879 as a present for Marguerite Lathuille, the daughter of a Paris innkeeper whose portrait he painted around the same time, will go on sale at Drouot in Paris next month. The small work, which has not been seen publicly until now, is expected to (ahem) fetch €280,000 ($340,551). (Guardian)

Gertrud Parker, Founder of Museum of Craft and Folk Art, Dies – The fiber artist who opened the San Francisco Craft and Folk Art Museum in her home back in 1982 has died at 96 from complications from a stroke. The museum grew into a downtown institution, which closed in 2012 after a 30-year run. (SF Chronicle)

JD Malat Joins Jury of “The Next Big Thing” – Art dealer Jean-David Malat of the JD Malat Gallery in Mayfair, London, has joined the panel of judges for the TV series “The Next Big Thing,” which premieres in February 2021. The show—think “American Idol” for young artists—aims to spot talented emerging artists who have suffered due to a lack of opportunities during lockdown. (Press release)

Midnight Publishing Group’s Own Sarah Cascone Was on Jeopardy! – Our very own senior writer Sarah Cascone was on Wednesday night’s episode of Jeopardy, winning a daily double and revealing her extremely specific knowledge of state capitals. Watch this clip to hear her recount the time she met the legend himself, the late Alex Trebek, on the subway. (Facebook)

See the Public Murals of Walls for a Cause – The gallery We Buy Gold and Orange Barrel Media have teamed up to organize a multi-site public mural project and art sale to benefit Project EATS. “Walls for a Cause NYC” will be on view from the street and online. Nine artists, including Felipe Baeza, Naudline Pierre, and Theresa Chromati, will take over Brooklyn and Manhattan walls from now until March 24. (Press release) 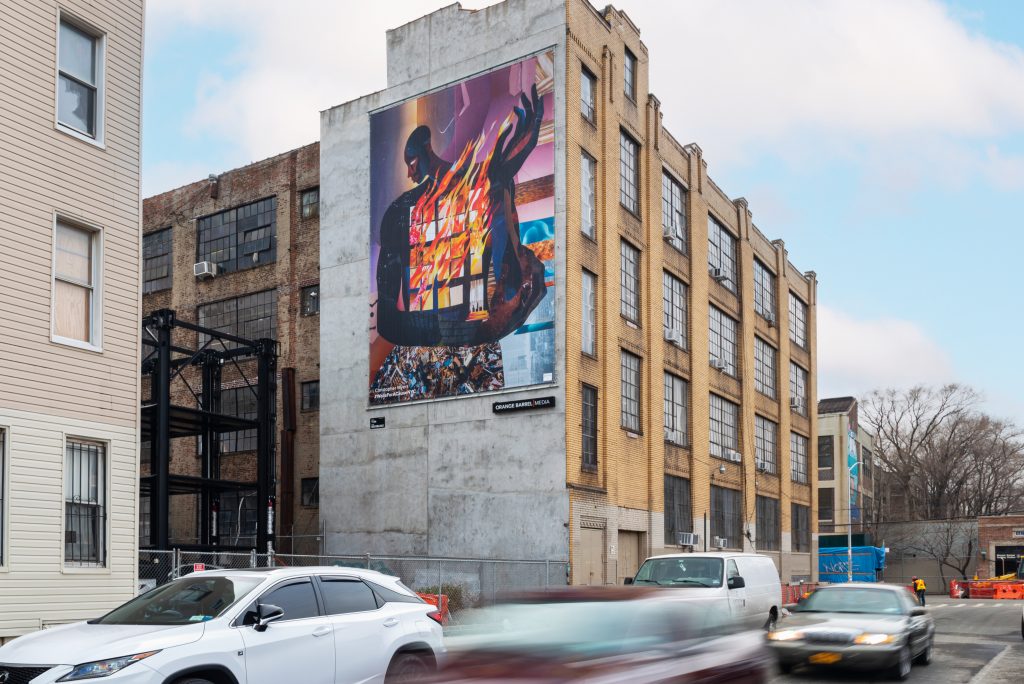