The Iranian regime is fuming over the publication of cartoon drawings mocking its supreme leader, Ayatollah Ali Khamenei, in the French satirical weekly Charlie Hebdo.

On January 4, Iran’s foreign ministry summoned the French ambassador, and the next day, announced the closing of the French Institute for Research in Iran “as a first step,” with more retaliations to come if the French government doesn’t sanction those responsible for the illustrations.

“The insulting and indecent act of a French [media] in publishing cartoons against the religious and political authority will not go without an effective and decisive response,” tweeted Iranian foreign minister Hossein Amir-Abdollahian on Wednesday. Iranian officials “will not allow the French government to step over the line. They have definitely chosen the wrong path,” added Amir-Abdollahian in Farsi. In a statement on January 5, the Iranian foreign ministry alleged the “offensive” action was also “another sign of Zionism’s attempts at exercising influence on media in order to promote Islamophobia.”

By Thursday night, Charlie Hebdo’s website was also hacked, according to French reports.

Indeed, angering the Iranian dictatorship was a big reason for publishing the cartoons in the first place.

“Make the funniest and meanest caricature of Ali Khamenei,” instructed the notoriously irreverent and controversial Charlie Hebdo in an international call for submissions to a drawing contest, called #MullahsGetOut, in December. The initiative aimed “to support the Iranians who are fighting for their freedom, by ridiculing this religious leader from another age and consigning him to historical oblivion.”

The contest came in response to Iran’s violent crackdown on protests since the September death of 22-year-old Mahsa Amini after Iranian morality police took her into custody for allegedly disobeying the nation’s hijab dress code.

Out of hundreds of submissions, 30 were chosen for Charlie Hebdo’s January 7, 2023 special edition, headlined “Mullahs, go back to where you came from!” (Moullahs, retournez d’ou vous venez). The winning entries include a sex and violence-obsessed Khamenei, taunted and humiliated by women. Long hair, headscarves, and high-heeled pumps become symbolic weapons in these drawings, which crush and hang by the neck a desperate Khameni.

The issue was sold out at most print-media kiosks in Paris by Wednesday evening, according to salespeople that Midnight Publishing Group News questioned. It is available online, and its cover illustration features a line of disgruntled, mini mullahs filing into a nude woman’s open cervix, her dark hair flowing as she grins at the viewer. 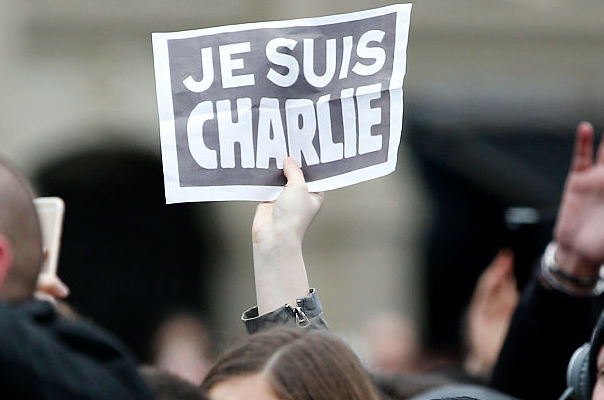 A person holds a placard reading “Je suis Charlie” during a remembrance rally at Place de la Republique on the one year anniversary of the attacks.
Photo: YOAN VALAT/AFP/Getty Images

The issue further marked the anniversary of the 2015 terror attack that killed 12 people in and outside the publication’s Paris headquarters. Its director and illustrator known as Charb, plus other iconic cartoonists Cabu, Wolinksi, and Honoré, were among those murdered in the coordinated operation that also killed four at a kosher grocery store in eastern Paris. The attackers said they were taking revenge on behalf of the Muslim prophet Muhammad, whose depiction, along with other religious and political leaders, had graced the pages of Charlie Hebdo as sexually explicit and vulgar caricatures.

The magazine was also targeted with firebombs and threatened prior to the 2015 attacks for illustrations of Muhammad deemed blasphemous by certain interpretations of Islamic law, and had its own security detail. In 2006, Muslim groups sued the publication for attacking the religion, but French judges ruled Charlie Hebdo was not taking aim at a single group, but rather poked fun at individual leaders.

The #MullahsGetOut contest “was also a reminder of why Charlie’s cartoonists and writers were assassinated eight years ago, and how [those reasons] are sadly still topical,” wrote the publication’s director Laurent Sourisseau, known as Riss, in an editorial. The drawings submitted all “say ‘no’ to religious tyrants,” and show “people’s attachment to freedom,” he added.

Speaking on Les Matins LCI, France’s foreign minister Catherine Colonna has clapped back at Iranian demands that the French government sanction Charlie Hebdo. “Freedom of expression exists in France, as opposed to what is happening in Iran, and it is exercised under the control of a judge, and within the framework of an independent justice system—something Iran undoubtedly knows little about,” she said. “Moreover, in French law, the notion of blasphemy does not exist.”

In a Thursday statement, France’s foreign ministry said its Iranian counterparts had not yet officially confirmed the closing of the 1983-founded IFRI cultural institute. Its shuttering “would evidently be regrettable,” said a government spokesperson.