This week, a top executive at OpenSea, the largest marketplace for crypto collectibles, was revealed to have profited by using insider information to buy NFTs in advance of his company publicly promoting them.

The platform’s head of product, Nate Chastain, used secret crypto wallets to purchase digital artworks before they were set to be featured on OpenSea’s home page—a form of promotion known to drive up the price of pieces. After the initial pop of interest, Chastain then sold the NFTs, funneling the earnings into a personal account.

In other words, he exploited his position to game the market in his favor.

The dodgy activity was first called out on Twitter by user @ZuwuTV, who himself both buys NFTs and sells purposely pixelated images of landscapes as the “Pixelated Beauty” collection on OpenSea. The news spread online like wildfire.

Hey @opensea why does it appear @natechastain has a few secret wallets that appears to buy your front page drops before they are listed, then sells them shortly after the front-page-hype spike for profits, and then tumbles them back to his main wallet with his punk on it?

It was the fact that Chastain used a unique CryptoPunk as his Twitter avatar that allowed online sleuths to identify his wallet, which also contains the CryptoPunk. (It is CryptoPunk #3501, with a blue bandana and small sunglasses, purchased for 26.98 Ether—$43,842 at the time—on February 25, 2021.) 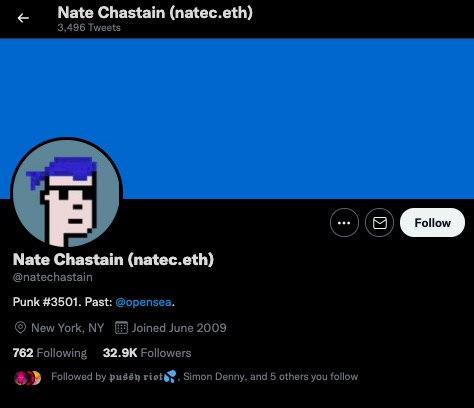 Screenshot of Nate Chastain’s Twitter, featuring CryptoPunk #3501 as his avatar.

OpenSea’s chief executive and co-founder, Devin Finzer, confirmed the report in a blog post this week. “This is incredibly disappointing,” he wrote. “We are taking this very seriously and are conducting an immediate and thorough third party review of this incident so that we have a full understanding of the facts and additional steps we need to take.”

Chastain has since resigned, Finzer said.

Technically speaking, the head of product’s actions weren’t illegal. The buying and selling of NFTs is not regulated by the Securities and Exchange Commission. Prior to the incident, OpenSea had no rules in place preventing such behavior.

The latter point has since changed, though. In his post, Finzer said his company has now implemented policies that forbid employees from both exchanging NFTs while the site is featuring or promoting them and using confidential information to purchase or sell any collectibles, “whether available on the OpenSea platform or not.”

Still, the intense response to Chastain’s market machinations might come to be recognized as a turning point in the way we think about NFTs vis-à-vis traditional art.

“In the art world, if someone who worked at a gallery bought up an artist’s art before a big public opening, that would be… a normal Monday,” tweeted Felix Salmon, Axios’s Chief financial correspondent (and a previous Midnight Publishing Group News contributor, this week).

In the art world, if someone who worked at a gallery bought up an artist’s art before a big public opening, that would be… a normal Monday

“The fact that this kind of behavior is genuinely scandalous in the NFT world is a very good indication that NFTs are much closer to being securities than they are to being art,” he added.

Founded in 2017, OpenSea was valued at $1.5 billion this summer, following a $100 million Series B fundraising campaign. Representatives from the company did not immediately respond to Midnight Publishing Group News’s request for comment about the incident regarding Chastain.