While many people say art fairs are a bad place to see art, the good ones—like Art Basel in Switzerland, which runs through Sunday—do have at least one major thing going for them. They are by far the most efficient way to take in the work of established artists, blue-chip estates, and emerging talents from around the world in one fell swoop, delivering the collective pulse of the moment. Here are five arresting works that stopped me in my tracks as I whizzed around Art Basel this week. Each one captures something profound about our current and rather vexed zeitgeist. 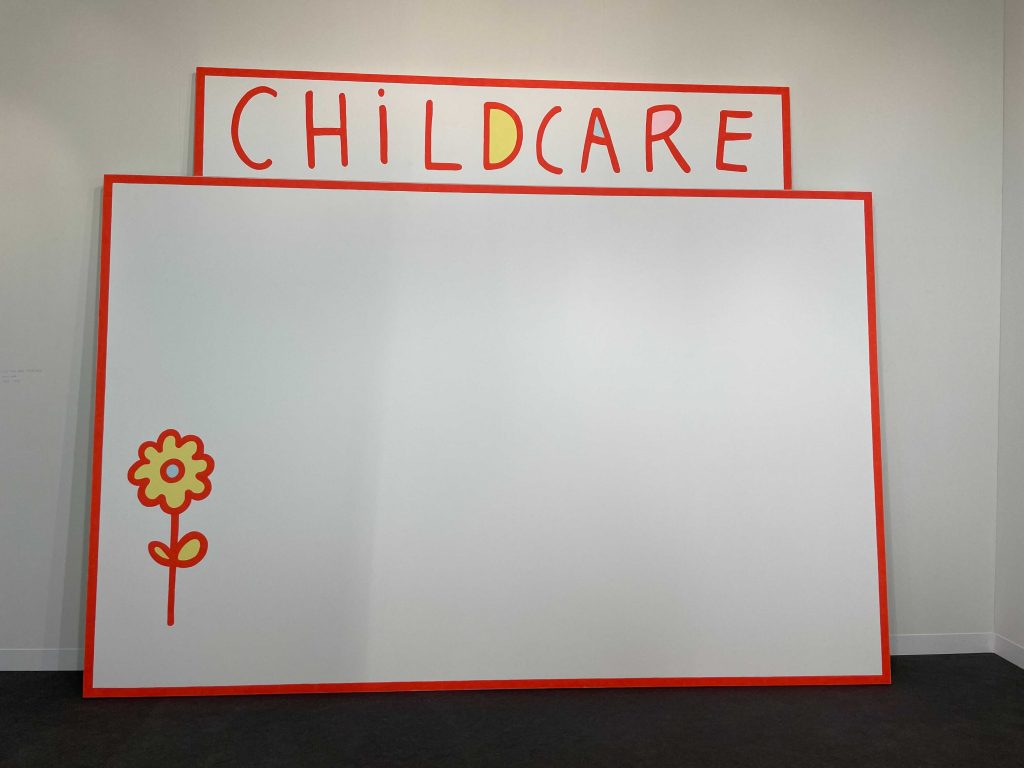 The 65-year-old Dutch artist Lily van der Stokker tricks you into considering tough topics with a veneer of cuteness. She creates critical statements about banal or taboo social issues like illness, aging, housework, and child-rearing, but packages them as joyfully colored paintings and sculptures. It’s not until the second look that you realize they are a bit more sinister.

At Air de Paris’s booth, a largely empty canvas emblazoned with the word “Childcare” leans against the wall. (It was included in the artist’s  retrospective, titled “help help a little old lady here,” at Zurich’s Migros Museum last year.) The empty space leaves one to wonder: yeah, what about childcare? It’s quite unsettling, especially after a year and a half when children were largely left at home, often to fend for themselves. Van der Stokker meticulously painted the word from a blown-up image on a projector, which was then remade onto canvas, giving the painterly strokes a unique sort of restraint.

While not too many people are ready to collect her large-scale paintings, the artist has caught the eye of curators and institutions—a solo exhibition is in the works at the Camden Art Centre in 2022. 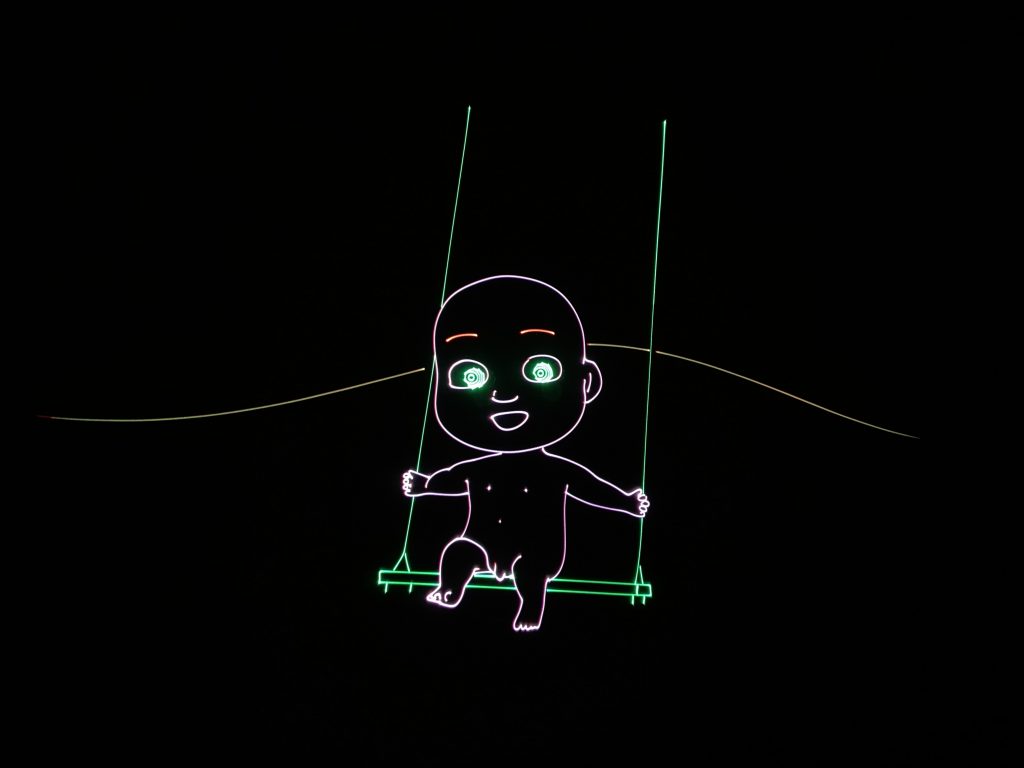 The French gallery High Art’s booth is empty, save for a rope that cordons off a large flickering projection of a swinging baby. The installation by the London-based artist Matt Copson is one piece of what he calls a three-part “laser opera.” A small cherub sings like a jaded, omniscient Greek chorus. He taunts from a swing in melancholic, sorrowful song: “I’ll play with you / through the fire / All day with you / distracting me / strange situation / earthly castration / strange situation / entertainment damnation.”

Another portion of the same work was included in a recent exhibition at High Art in Paris; it is also on view at CLEARING in Brussels (through October 23). But the installation hit the big time when it somehow went viral on TikTok, leading groups of non-art-world TikTokers to line up to see it in person, astounding the gallery.

Its digital fame is somewhat ironic given that it is devoutly analog, made with club lasers that are mirrored and projected on the wall. The rapid amalgamation of still images flicker in a way that creates a sense of continuity, without actually being a fluidly moving image. The effect successfully captures our attention in a time of constant tech-addled distraction. 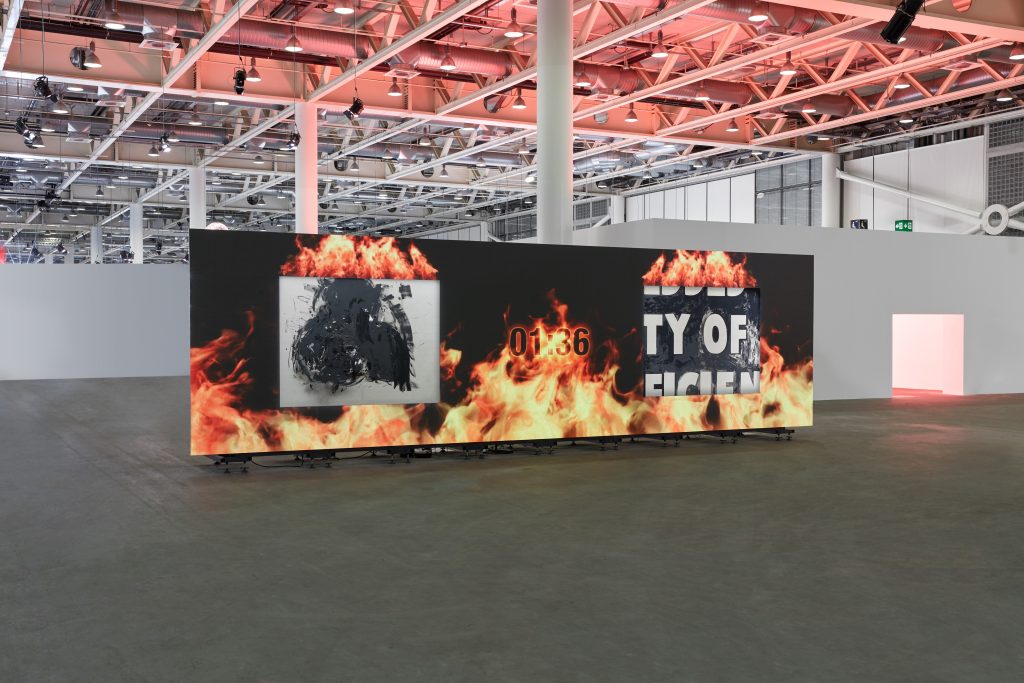 Too often, class dynamics are left out of the conversation in the affluent annals of the art world, because it is, of course, a bit awkward, isn’t it? (It also causes some cognitive dissonance, like wearing a dress that says “tax the rich” to the Met Gala). But Austrian artist Philipp Timischl has drawn up important questions about class-based exclusion, social mobility, and power dynamics in his practice and especially via his 2021 work The Embedded Mentality of Self-Sufficiency, which was brilliantly curated at Art Basel Unlimited, the fair’s sector for oversize art,  set right in front of the entrance as its curtain-raiser.

For a near two minutes, the screen is just a blazing fire and a foreboding countdown. It starts: on the screens, we see flickers of self-made and YouTube-sourced video, from the artist in drag to Kim Kardashian as she posed on the Met Gala runway in Demna Gvasalia’s now-iconic black-out suit (speaking of zeitgeist, this video was recut to include these newest clips just days before the opening of the fair). An anxious loop of captions about artistic intent scrolls underneath, including one rather searing line: “I can’t even afford my own work.”

The embedded mentality of self-sufficiency’s form is as good as its content: Large LED screen panels were inlayed with two canvas paintings—depending on what was on the screen, the canvases own static textures changed and came in and out of focus.

There were more than a few paintings at Art Basel Unlimited that were so large they required their own rooms, but none felt as epically proportioned—both in size and content—as Meleko Mokgosi’s Bread, Butter, and Power. Sprawled across 21 panels, it becomes nearly immersive, taking up nearly all four walls of its dedicated booth. Images span more than a century of history and consider gendered labor as a post-colonial issue.

The cathedral-size work is one of an eight-chapter series called “Democratic Intuition.” The works reference important historical figures, from Angela Davis to Harriet Tubman, and show scenes of both work and leisure that speak to gender divides and the labor undertaken by people of color.

The work by the Botswanian, U.S.-based artist was, unsurprisingly, snapped up for its asking price on the first VIP night of Unlimited by an American collector. 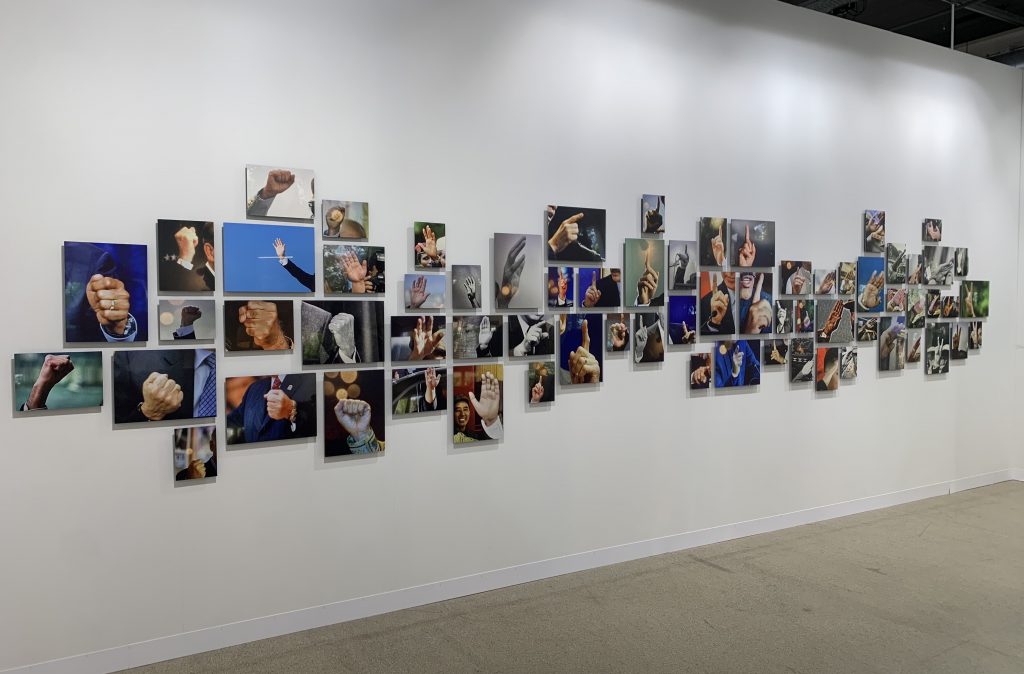 This incisive work by Berlin-based Pakistani artist Bani Abidi shows that, despite spanning decades and nation-states, the physical posturing of politicians is universal. Fists, waves, and finger-pointing look similar despite very different messengers (most of whom are men), including Mao, Stalin, and Donald Trump. Accompanied by a sarcastic title, Abidi’s close-up images take away the power of their speakers by amputating them symbolically and physically. What remains is a poignant critique of political choreography which, when divorced from the rhetoric that typically accompanies it, becomes almost comical.

If you want to see more of Abidi’s trenchant work but won’t make it to Basel, it is the subject of a major survey at the MCA Chicago developed in collaboration with the Sharjah Art Foundation (through June 5, 2022).