Ahead of the opening of his current double retrospective at the Whitney Museum of American Art in New York and the Philadelphia Museum of Art, Jasper Johns had a spot of legal trouble. The problem was one of his new works, Slice, and its use of a silkscreened copy of a drawing by a 17-year-old boy.

Jéan-Marc Togodgue, who moved to the United States from the Republic of Cameroon in west-central Africa four years ago, was shocked when he got a letter from Johns in April. The esteemed painter, perhaps the most important living American artist, admitted that a drawing the teen had gifted their mutual orthopedic surgeon, Alexander M. Clark Jr., was prominently featured in his painting Slice (2020).

A talented athlete who hopes to earn a basketball scholarship, Togodgue attends Salisbury School, an all-boys academy in Connecticut. He also loves to draw, sketching different characters in his notebooks. When he tore his anterior cruciate ligament and meniscus playing soccer shortly after his arrival to the country in 2017, Togodgue drew the inner workings of the knee based on an image he found on the internet.

He presented it to Clark, who hung it in his Sharon, Connecticut, office. That’s where it caught Johns’s eye.

The now 91-year-old artist “thought that the image might be useful” and copied it, he wrote in the letter to Togodgue. “I should have asked you then if you would mind my using it, but I was not certain that my idea would ever materialize.”

But materialize it did, in Slice, which also features “Slice of the Universe,” a 1986 star map showing the distribution of nearby galaxies that astrophysicist Margaret Geller sent Johns in 2018. (The image intrigued Johns because of the way the galaxy markers seem to form a stick man in the middle of the image.) But while he warned Geller that she was helping inspire a new piece, Togodgue had no idea his drawing had caught the eye of a famous artist until after the work was done. 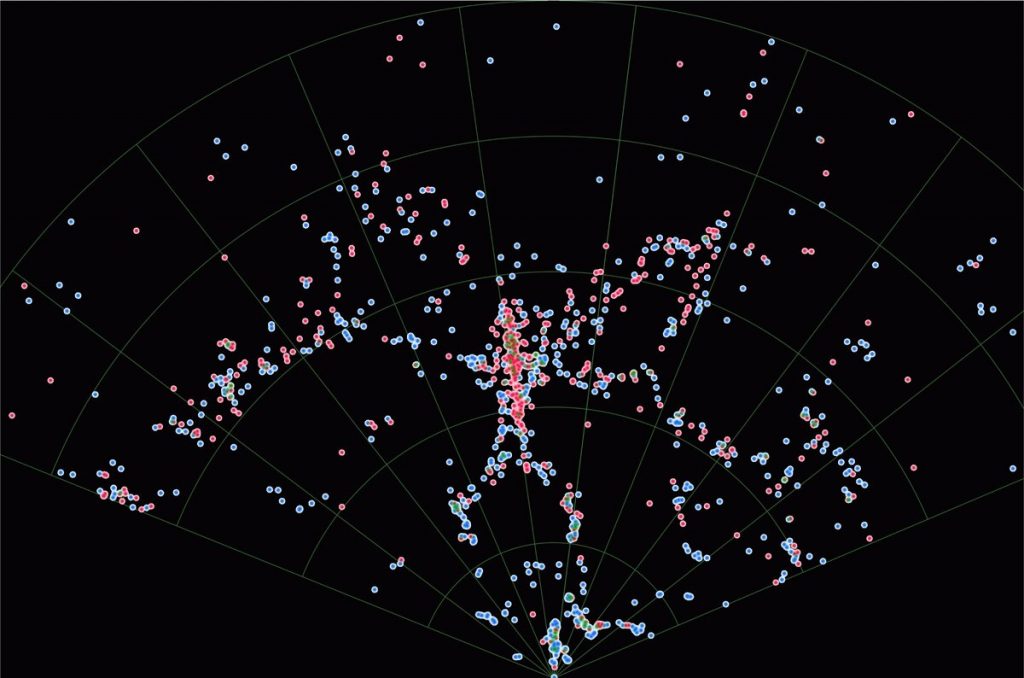 Margaret Geller sent this “Slice of the Universe” (1986) showing the distribution of nearby galaxies to Jasper Johns, who incorporated it into one of his paintings. V. de Lapparent, M.J. Geller, and J.P. Huchra, 1986, Astrophysical Journal Letters, 302, L1 (graphics by M.J. Kurtz).

“I would like you to be pleased with the idea and I hope that you will visit my studio to see what I have made,” Johns continued.

At the artist’s invitation, Togodgue and his host parents, Rita Delgado and Jeff Ruskin (who also teach at his school), went to see the painting at Johns’s studio. Togodgue was thrilled and posed for a photo with the piece, which perfectly reproduces his original drawing.

“I’m not an art critic, but I did like the way Jasper incorporated Jéan-Marc’s work,” Ruskin told Midnight Publishing Group News in an email.

But that wasn’t the end of it. The artist Brendan O’Connell, the father of Togodgue’s close friend, took issue with an artist of Johns’s renown copying the work of a child without permission. When he found out what had happened, he sent Johns a strongly worded letter, accusing him of intellectual property theft.

“The wealthiest and most respected Titan in the art world taking the personal drawing of an African ingenue” was not a good look in the age of Black Lives Matter, O’Connell wrote. He suggested Johns create a foundation to support Togodgue and other young athletes and artists from Cameroon. 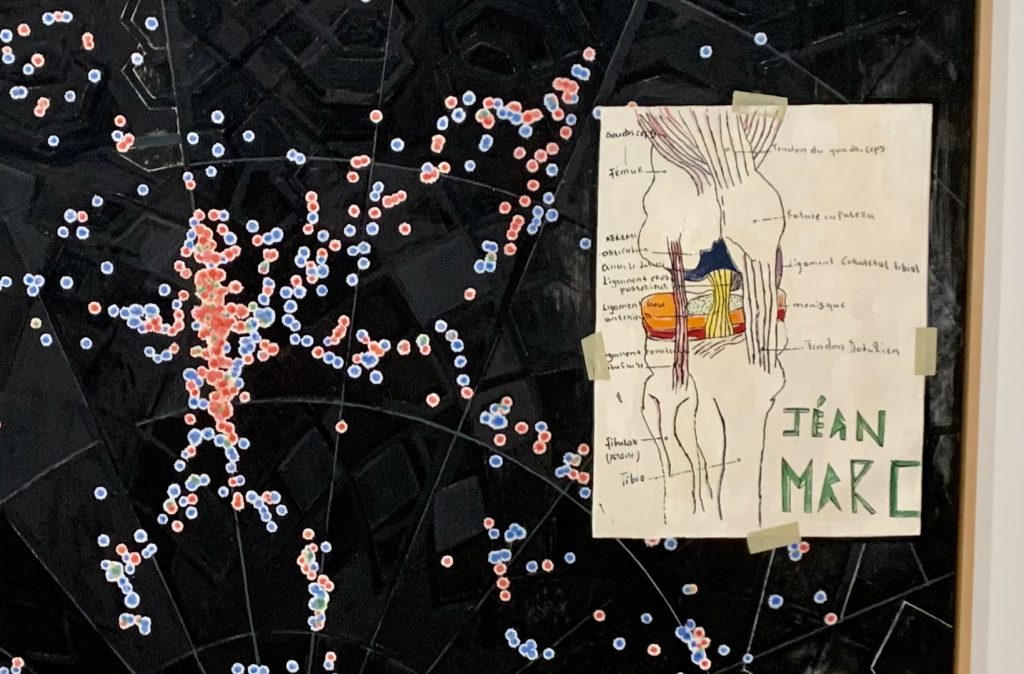 Conley Rollins, who is an informal representative for Johns, told the Washington Post that Johns had already been discussing what to do for the teenager. But those thoughts—helping pay for Togodgue’s college education, or giving him a preparatory for Slice—had never been relayed to the teenager or his host family.

That’s when lawyers entered the picture. What constitutes fair use of copyrightable material in fine art is a complex question. It’s possible that John’s appropriation of Togodgue’s intellectual property could be considered transformative. It’s equally possible that the artist could have been found to have violated the youngster’s copyright.

Either way, Johns and Togodgue reached an undisclosed settlement for a licensing agreement in August.

“I was happy and relieved that it was settled in the end, although Rita and I maintain that it could have been settled earlier and then the lawyers and strong letters would not have been necessary,” Ruskin said. “Jéan-Marc is looking into studying art in college. He finds it relaxing, and he is proud of the pieces he has finished.” 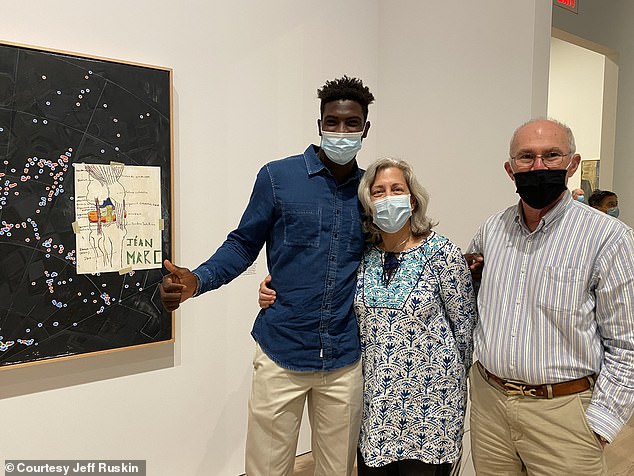 Jéan-Marc Togodgue and his host parents, Rita Delgado and Jeff Ruskin, with Jasper Johns’s Slice at the Whitney Museum of American Art in New York. Photo courtesy of Jeff Ruskin.

Today, the work is part of the Whitney’s presentation of “Jasper Johns: Mind/Mirror,” and is being offered for sale by the artist’s dealer, Matthew Marks Gallery in New York. The proceeds will benefit Johns’s nonprofit, the Foundation for Contemporary Arts.

With the legal dispute behind them, Togodgue, Ruskin, and Delgado were able to visit the Whitney and see Slice in the museum’s galleries, where the teenager is credited by name in the wall label.

“We were a very proud mama and papa,” Delgado told the London Times. “We kept telling people who were looking at the piece: ‘Well, if you want to know who did that, right over there, that’s Jéan-Marc!’ It stimulated some wonderful conversations with a whole assortment and variety of art lovers, art historians and art teachers. It was the perfect afternoon.”