“Refik Anadol: Unsupervised” is being touted as Artificial Intelligence’s triumphant arrival in the museum-art canon. So I went to see the splashy installation currently in the Museum of Modern Art’s ground-floor annex with a mission, to get a glimpse of what MoMA-approved A.I. art promises, or threatens, for the future.

Born in Istanbul and currently based in Los Angeles, with a studio of more than a dozen people, Anadol was known for many years more for interactive public-art commissions than for work in museums and galleries. He boasts collaborations and support from the likes of Microsoft, NVDIA, and Google. In the recent past, his stock has dramatically soared—which makes sense given the fact that his work engages with three trends that have lately shaken up the art conversation: immersive installation, NFTs, and generative A.I. “Unsupervised” combines a bit of each.

Here is what you see at MoMA: A towering, high-res screen where abstract images morph hypnotically and ceaselessly. Sequences run a few minutes each, toggling between different styles of animation.

The most crowd-pleasing of these simulates a seething, gravity-defying cloud of colorful fluid, the palette based on colors derived from the works in MoMA’s collection. New colors are constantly swirling into the image and taking over, the whole thing surging in and out restlessly, like a psychedelic, drugged-out ocean wave. The high-res screen renders the simulated rainbow gloop convincingly thick and dimensional. 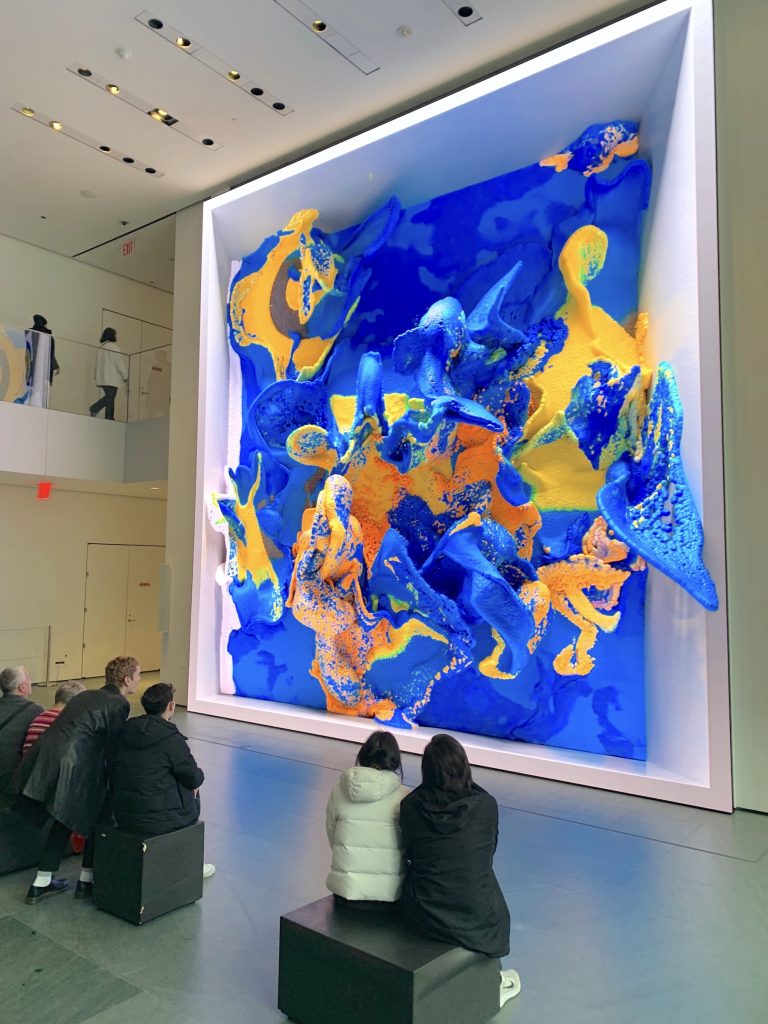 While this mode is the most visually memorable, it is also the one that has the least clear connection to the ostensible Big Idea of the show. “Anadol trained a sophisticated machine-learning model to interpret the publicly available data of MoMA’s collection,” the show’s description explains. “As the model ‘walks’ through its conception of this vast range of works, it reimagines the history of modern art and dreams about what might have been—and what might be to come.”

This premise is more directly enacted in the other two types of animation, which are also harder to describe. One evolves endlessly through blobby, evocative shapes and miasmic, half-formed patterns. Sometimes an image or a part of an image briefly suggests a face or a landscape but quickly moves on, becoming something else, ceaselessly churning. It looks like this: 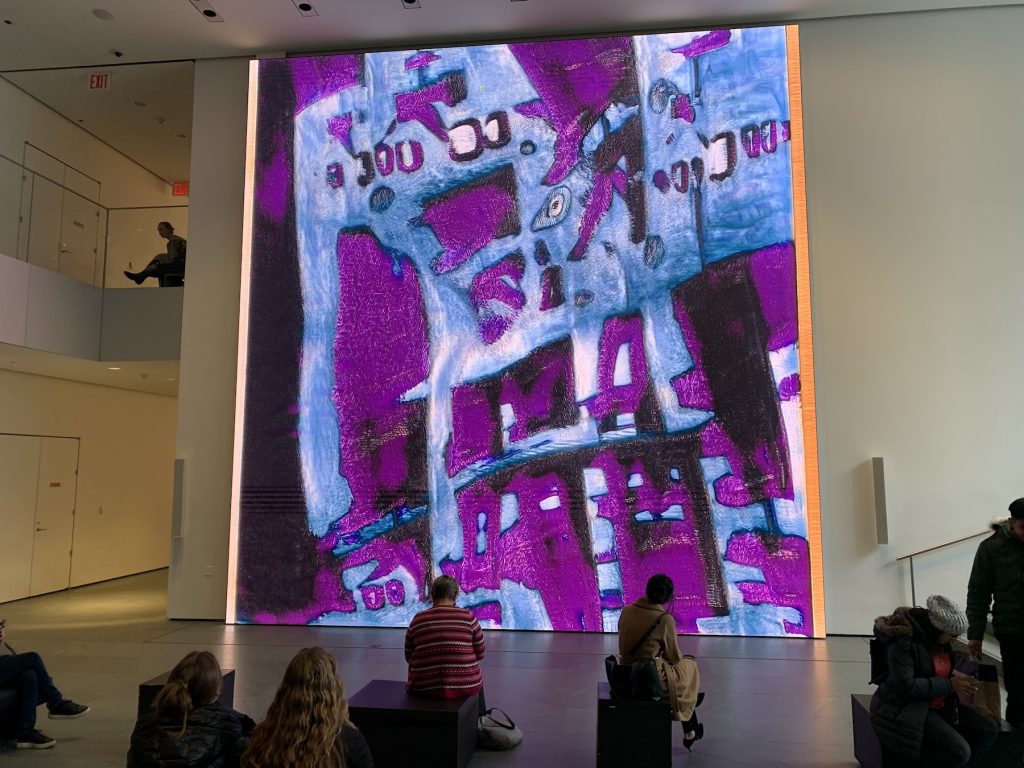 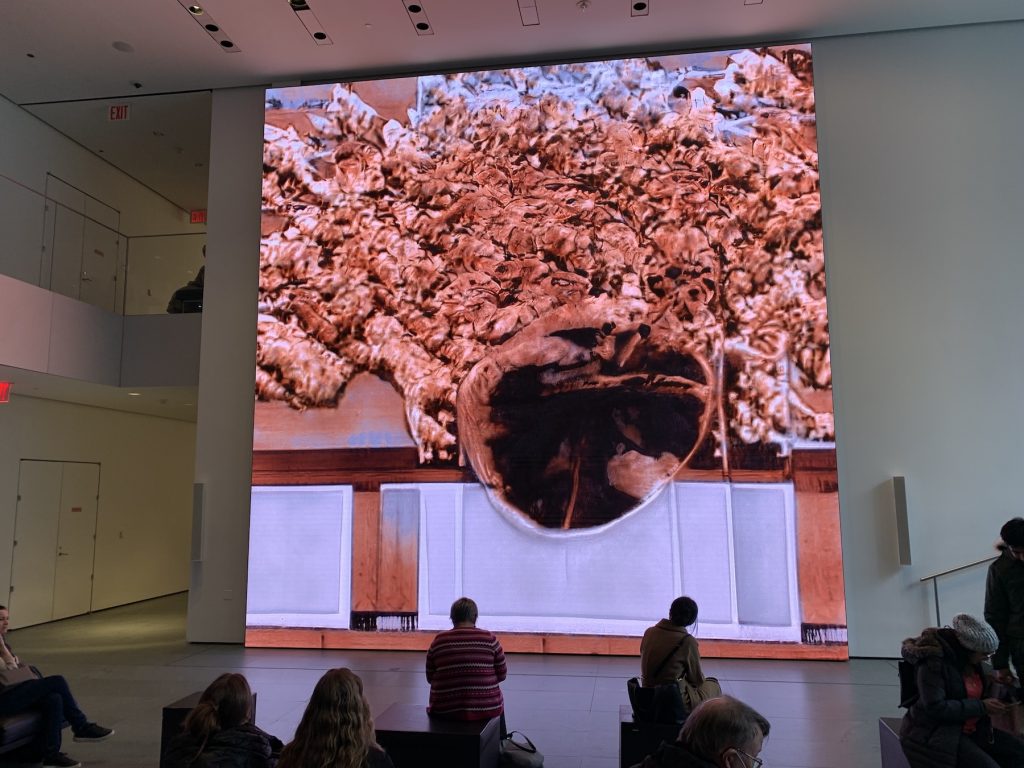 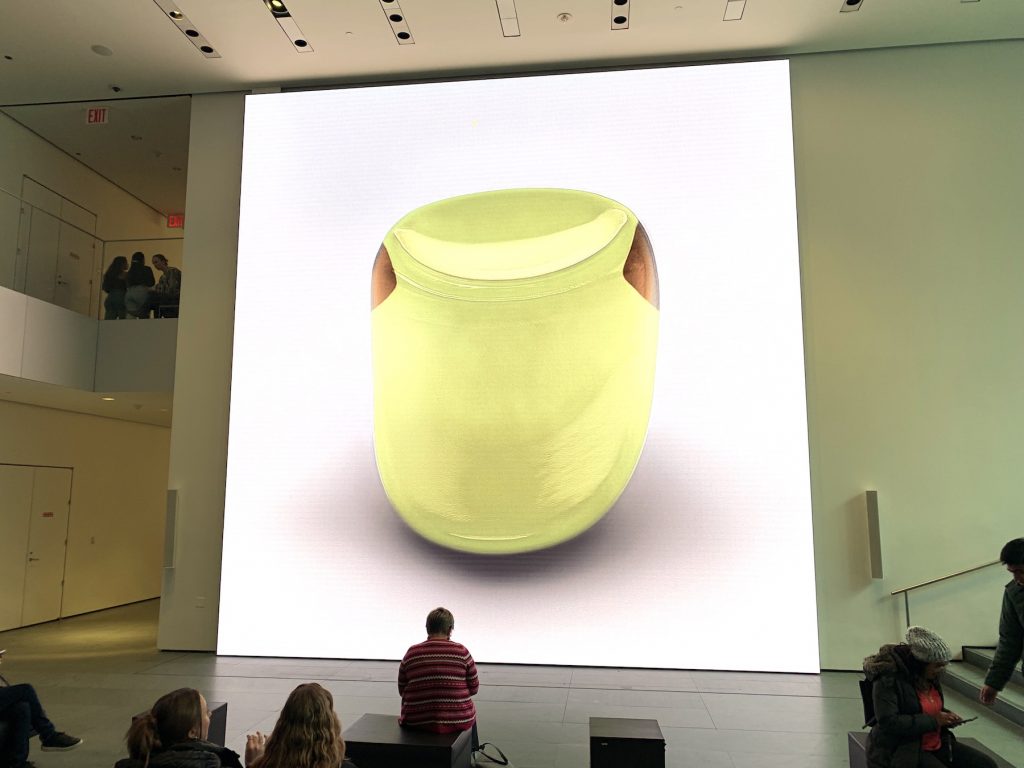 A third type of animation does much the same, but with jittery networks of lines connecting different key points as the art-inspired shapes define themselves. I’m not totally sure what these vectors suggest, but they give the image texture and atmosphere. It looks like this: 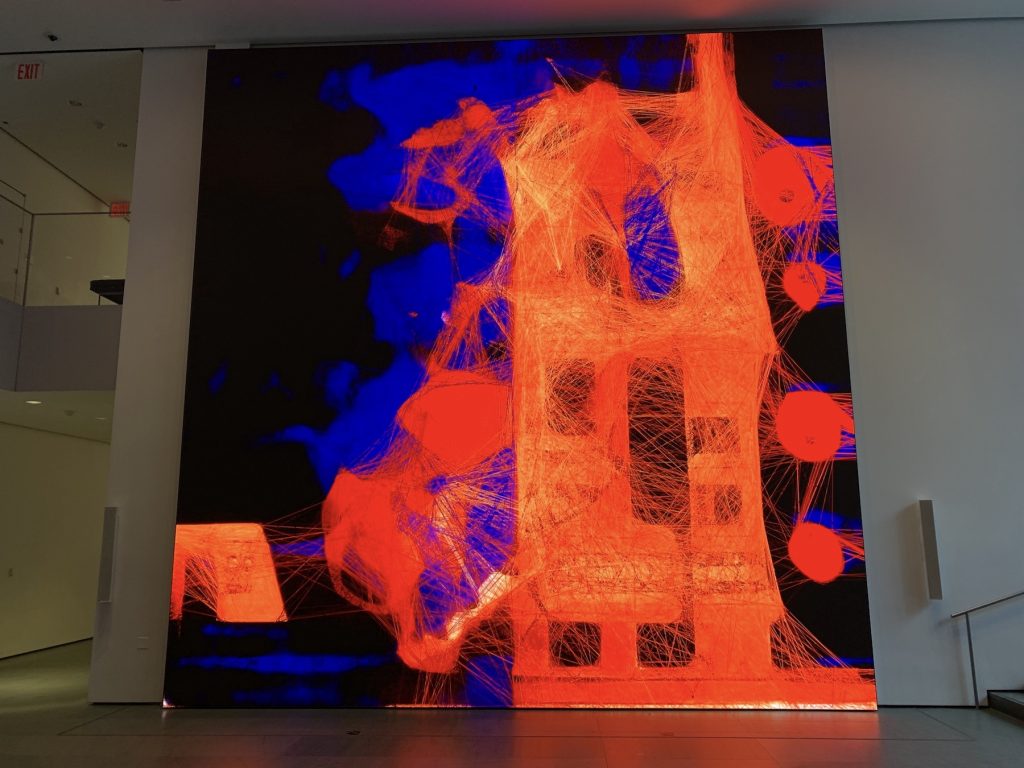 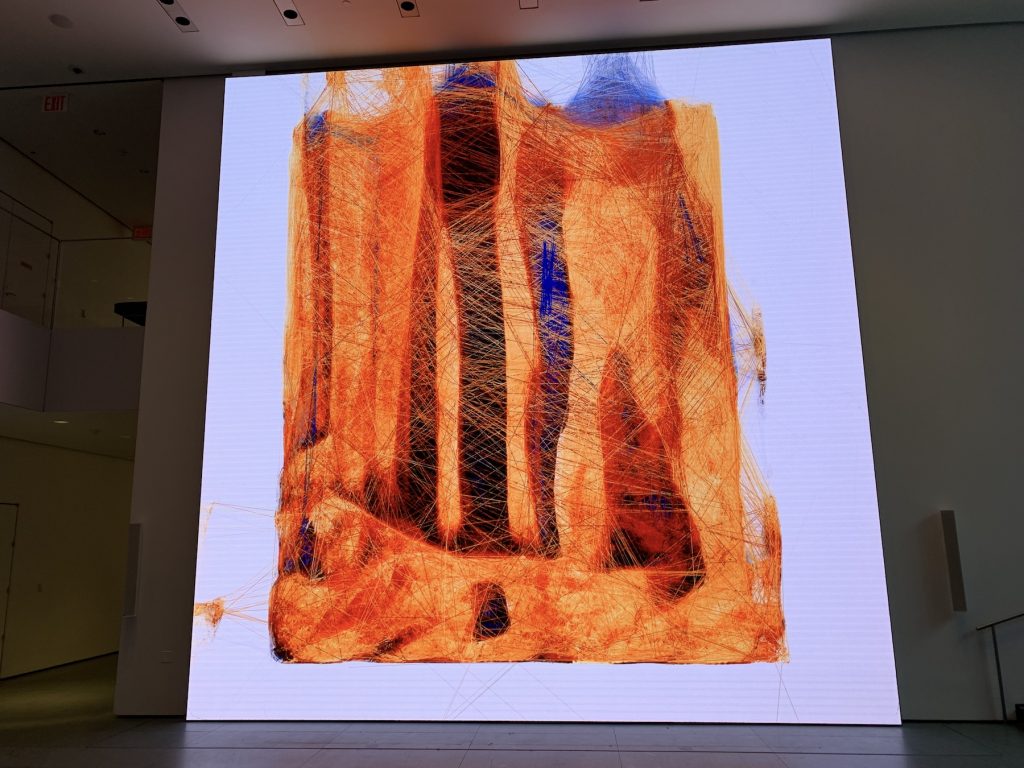 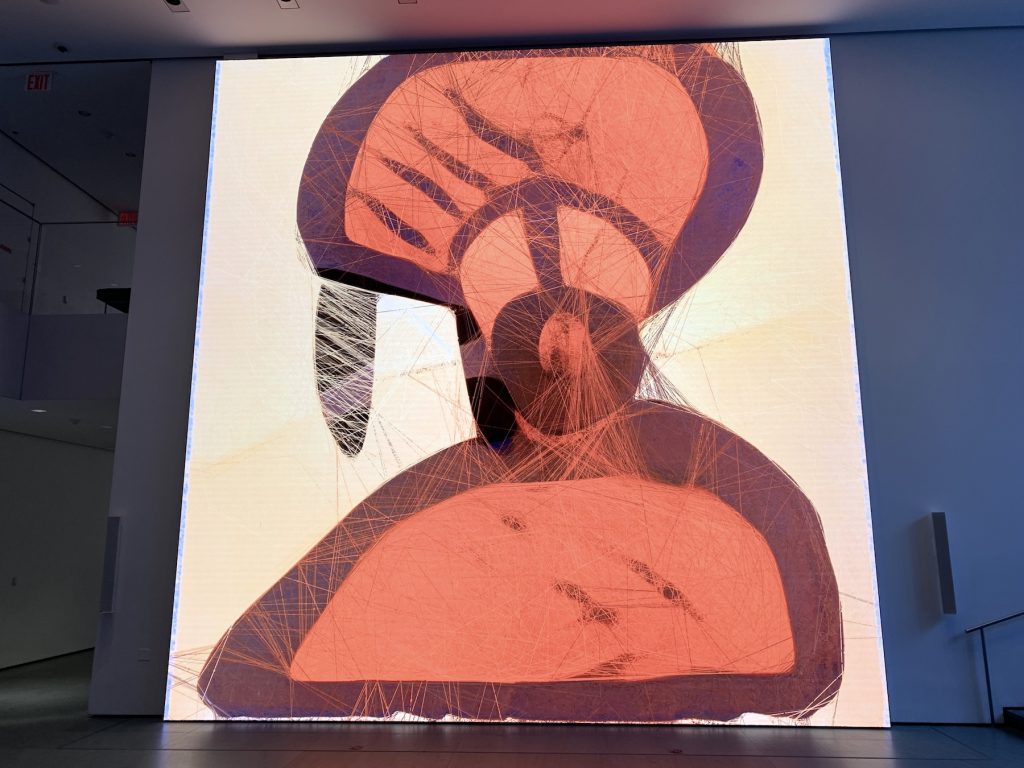 Art History, Without the History

You can tell, in these latter two types of animation, that “Unsupervised” is manifesting art-like images specifically inspired by some constellation of works in MoMA’s collection. Despite a screen that appears as punctuation between sequences displaying dense graphics related to what you have seen, the exact operation is not really clarified.

The ever-new, synthetic images of Anadol’s “Unsupervised” are blobby and chaotic, and look exactly like what art made via Generative Adversarial Networks most often looked like before the breakthroughs of DALL-E and its A.I. ilk captured the imagination of the public last year: Woozy, semi-random, art-like visual outputs, with wispy, unresolved edges. They look a little bit like preliminary sketches for art you might have seen in the original data-set (or in the galleries)—if you squint. 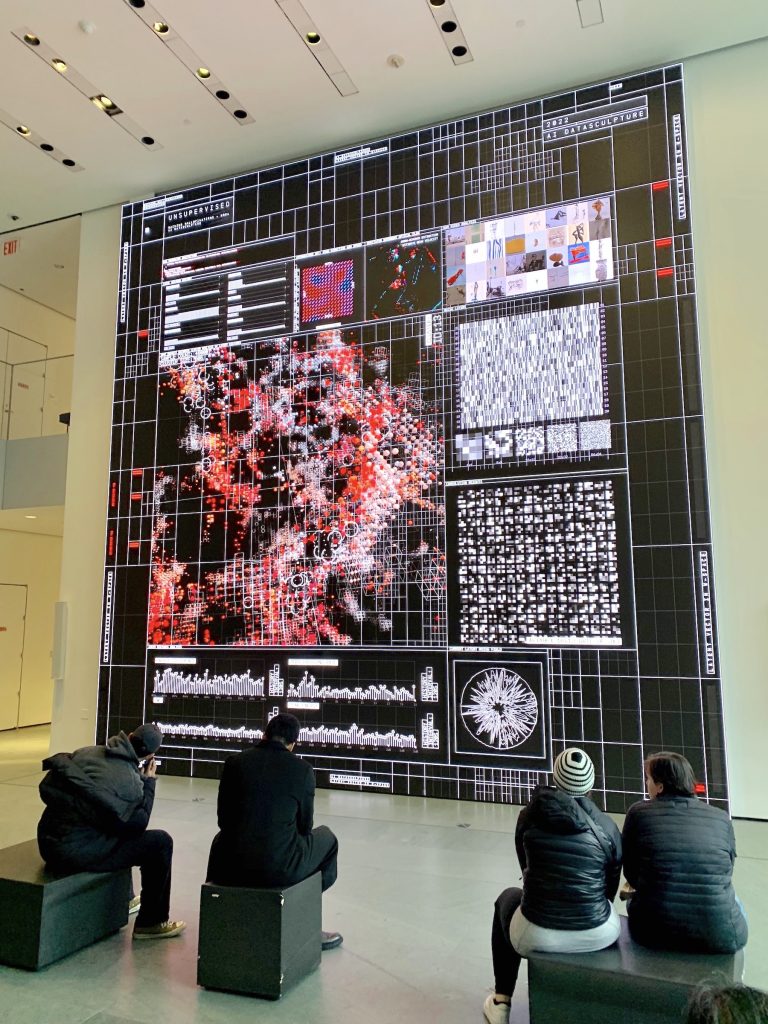 The effect is pleasant. What it is not is anything like what MoMA says it is: an experience that “reimagines the history of modern art and dreams about what might have been.”

MoMA has spent recent decades trying to move beyond the formalist ideas of art that it inherited from its founding director, Alfred H. Barr, Jr. with his famous graph of Modernism as a bunch of styles mechanically branching off of one another. Generally, contemporary art historians would insist on rooting meaning in culture and context. Abstraction means one thing when its Gee’s Bend Quilts, another when it is Abstract Expressionism, still another when it’s Tibetan sand painting, and still another when you put a bunch of images into an A.I. blender and remix them.

It’s striking to see MoMA tacitly let a new high-tech formalism through the door, one even flatter and less historical than Barr’s—as if the curators were so excited by the wonders of A.I. that they didn’t notice. What the endorsement of “Unsupervised” as an alternative-art-history simulator insinuates, for its audience, is that art history is just a bunch of random visual tics to be permuted, rather than an archive of symbol-making practices with social meanings.

Describing his works that use A.I. to make generative art out of huge datasets like “Unsupervised,” Anadol speaks of them as machine “dreams” or machine “hallucinations.” But the terminology, once more, mystifies what is going on. 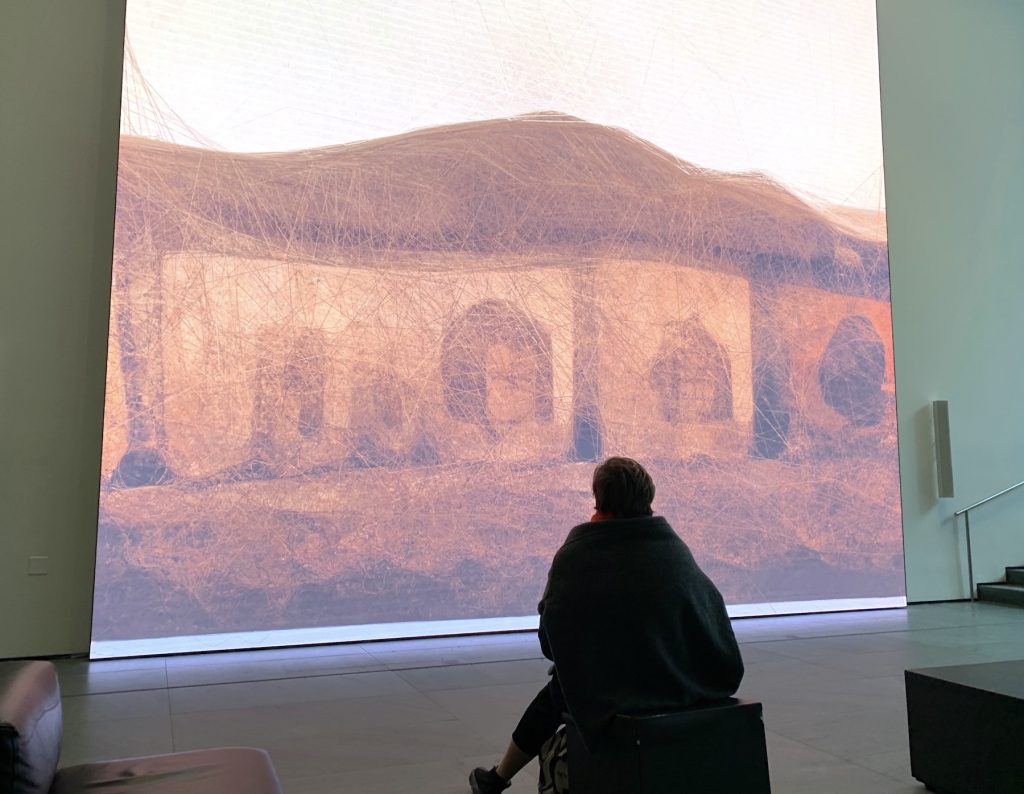 As Jorge Luis Borges once wrote, citing Coleridge, in dreams (I guess I have to specify here, in human dreams) emotional causality is reversed: “Images take the shape of the effects we believe they cause. We are not terrified because some sphinx is threatening us but rather dream of a sphinx in order to explain the terror we are feeling.”

But there is no emotional text to Anadol’s endless animation at MoMA. At most, the installation conveys a generalized awe at the machine’s superhuman capacity of visual analysis. (The fact that the soundtrack is a kind of shapeless, droning synthesizer score that is almost a cliché in “futuristic” video work doesn’t help.)

I sat through two hours of “Unsupervised.” I can’t think of a single image in it that evoked any feeling in me besides curiosity about what it might be referencing. As one might expect, they are just semi-random acts of syntheses and recombination of properties, expressing nothing about anything in particular except for the machine’s ability to do what it is doing.

I would contend that scraping away the ill-considered metaphors (e.g. reimagined art histories, dreaming) helps to better see what’s really happening in front of your eyes.

This would be nitpicking, though, if it weren’t for the fact that what these poetic readings of the technology are doing is selling us on a certain style of thinking about A.I. as a creative proposition, at a time when A.I. text-generation and A.I. image-generation are being deployed so fast that society is racing against the clock to catch up with the implications—as if “move fast and break things” hadn’t been discredited as a motto.

It is because Anadol has created such a purely decorative, cheerleader-ish style of A.I. art—so different than the critical lens that artists such as Hito Steyerl and Trevor Paglen have brought to the subject in recent years, with great impact—that he received so much support along the way from the tech giants. Indeed, his positivity is probably an unstated condition of that support. 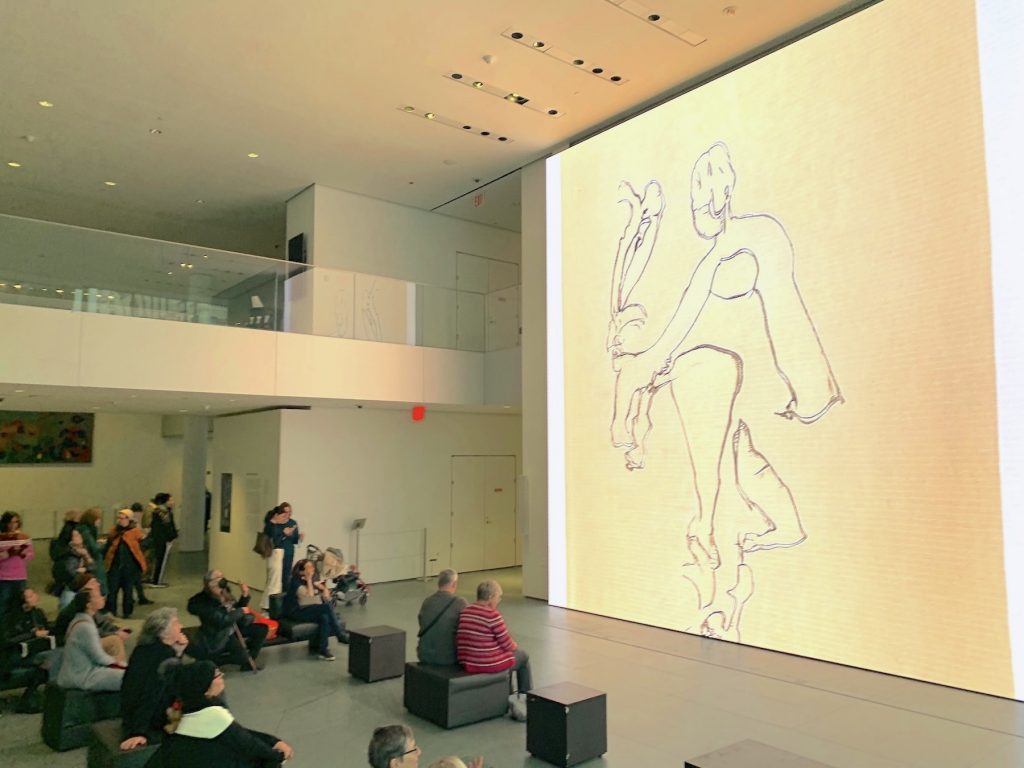 In the last few years, I’ve noticed a pervasive and perverse rhetorical sleight of hand in the art-tech conversation. Call it the willful misreading of dystopia. You hear technologists reference artworks that are meant as sci-fi cautionary tales but, weirdly, purely as positive design inspiration, divorced from their prophetic moral or ethical substance. The recently trendy idea of the “metaverse,” which comes from Neal Stephenson’s grim take on virtual reality in Snow Crash, is an obvious example.

Anadol is a notable dystopian mis-reader. When he refers to his works as “machine dreams” and “collective hallucinations,” he often says his inspiration is Ridley Scott’s Blade Runner. In a TED Talk, he describes having his imagination fired by the moment in that movie when the android Rachael realizes that her memories are not real, but implants. “Since that moment,” Anadol says, “one of my inspirations has been this question: What can a machine do with someone else’s memories?”

Blade Runner is a melancholy work about the uprooted sense of self and collapsing sense of reality in a future where humanity and machine are no longer distinguishable. None of this seems to register with Anadol, just the idea that machine-generated memories are cool. 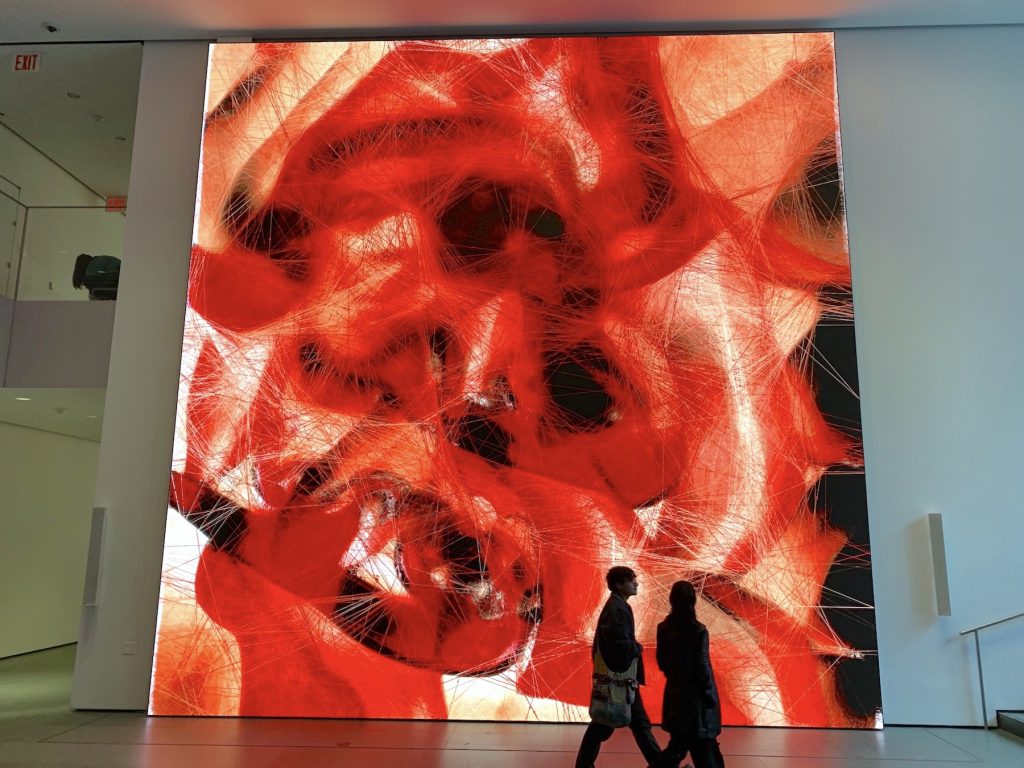 Anadol’s first work that used A.I. to generate infinite new outputs based on a massive dataset was Archive Dreaming, executed in spectacular installation form in 2017, as an application of the experiments he had been engaged with at Google’s Artists and Machine Intelligence Program. It looked at 1,700,000 documents and generated ever-new images based on them.

In that same TED Talk, Anadol claims that Archive Dreaming was inspired by Borges’s famous short story The Library of Babel, which envisions a universe that is one never-ending library, whose books contain every possible combination of characters. But The Library of Babel was an intellectual horror story, a parable about the nihilism that results when all meaning collapses into nothing. When the inhabitants of Borges’s library finally realize the implications of the world they live in, they commit mass suicide!

The point is, these cultural references are mined in the most superficial way—very much as MoMA’s archive is sucked up in Unsupervised and stripped of real substance outside of pure visual inspiration. And so, you can read this style of art as emblematic of a moment in which tech aesthetic of perpetually novel gadgetry is dominant while the humanities, with their unprofitable baggage of historical and moral concerns, are being allowed to wither. 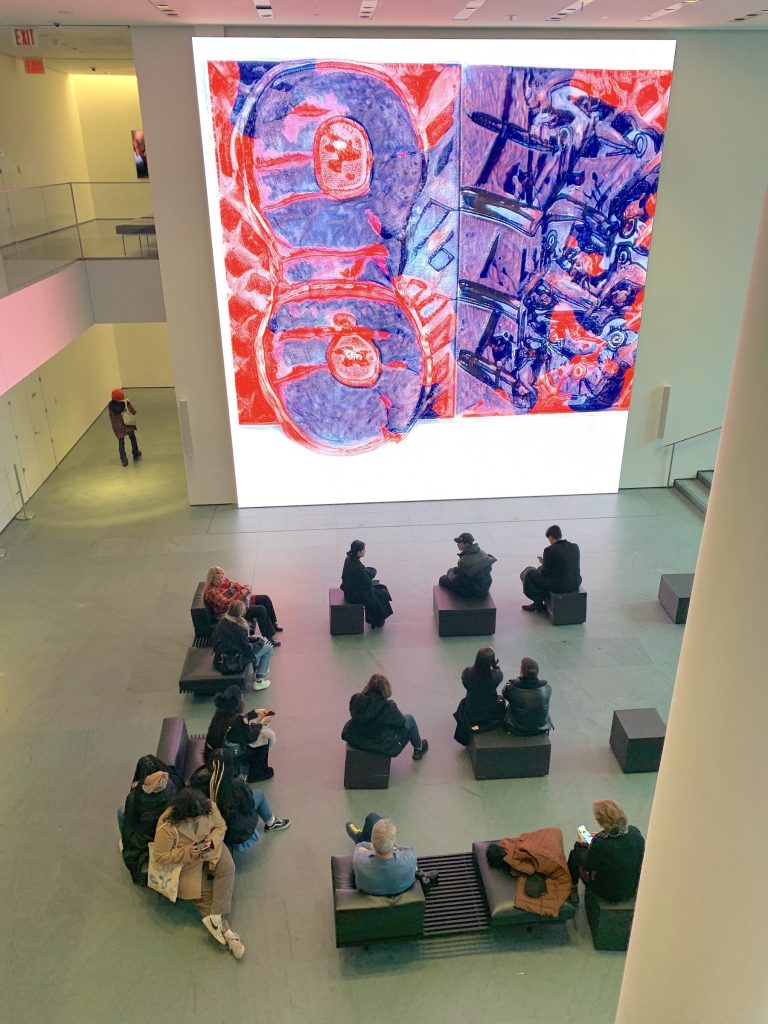 And Then There Are the NFTs

Don’t get me wrong. “Unsupervised” is amusing enough on its own, if you look past the cloud of mystification. It’s a bit like an extremely intelligent lava lamp.

But if it seems a little vacant, there is reason to suspect that MoMA is incentivized not to ask too much of it.

With his background, Anadol was well-positioned to become one of the biggest stars of the NFT art scene during the crypto boom of 2021. In fact, his “Unsupervised—Machine Hallucinations—MoMA Dreams” line of NFTs based on MoMA’s collection is being sold on Feral File, the NFT marketplace from the well-respected art-technologist Casey Reas (one of Anadol’s former teachers at UCLA). “Ten years ago, when we asked, Can we mint machine memories and dreams in the blockchain of one of the world’s most inspiring archives? I wouldn’t have imagined that was possible,” Anadol enthuses in MoMA Magazine. “I mean it was a very Philip K. Dick idea, but I feel like we are, right now, truly doing it.” (Finally, a way for MoMA to play a part in bringing the cheerful world of Total Recall closer to reality!)

MoMA itself gets a percentage of the sales of the digital artworks—17 percent of primary sales and 5 percent of secondary. Surely showing “Unsupervised” prominently at MoMA has to be considered as a great ad for the associated line of NFTs that sends profits back to the museum (you can see the spike of trade in them that coincides with the show opening on OpenSea). The curators have been promoting the show with conversations featuring both Anadol and Reas, where they talk as much about NFTs as about the installation.

It may be that the exact same thing that makes this genre of work commercially appealing for people buying NFTs—its untroubled techno-philia—is what makes it feel flat to me as an artistic statement. The suspicion that MoMA is incentivized to fast-track this kind of art is going to linger.

Sadly, the melting of commercial and non-commercial borders strikes me as more prophetic of “what might be to come” in art than any of the images summoned up by the machine in the gallery.

“Refik Anadol: Unsupervised” is on view at the Museum of Modern Art, New York, through March 5, 2023.