To mark its 175th anniversary, the Smithsonian Institution is staging a massive celebration in the form of a sprawling exhibition featuring works from many museums under the Smithsonian umbrella. To tie them all together, the organization is also commissioning site-specific art commissions from Beatriz Cortez, Nettrice Gaskins, Soo Sunny Park, Devan Shimoyama, and Tamiko Thiel.

The show, titled “Futures,” will be held at the Smithsonian’s storied Arts and Industries Building, which has been largely closed to the public for two decades. Dating to 1881, the building, which served as the first home for the U.S. National Museum, has undergone a $55 million renovation and is once again ready to welcome the public with an interdisciplinary, immersive exhibition asking them to consider how art and technology continue to shape our world.

The show is due to open in late 2021; after its closure, the building will undergo another round of renovations before opening permanently.

“We have tried to get a piece from each other Smithsonian museum to reflect that diversity of knowledge and celebrate that legacy within the construct of the future,” Ashley Molese, the Arts and Industries Building curator, told Midnight Publishing Group News.

Expanded Present, an iridescent installation by Park, will greet visitors outside, surrounding the doorway with a sparkling cloud—because when a building has been closed for 20 years, you need to have something letting the public know you’re open for business.

The piece, which will change in appearance based on the time of day and shifting weather conditions, is made from reflective materials such as fencing, metal studs, and dichroic glass, which was invented by NASA.

Once inside, there will be more than 150 objects to examine, including artifacts of scientific and technological advancement placed alongside works engaging the tools of the future.

Highlights include the solar panels that Jimmy Carter installed on the roof of the White House during his presidency in the 1970s and the prototype of Virgin’s Hyperloop used in a successful test late last year. There’s  also the Bakelizer, the original machine that chemist-entrepreneur Leo Hendrik used to produce the first synthetic commercial plastic. 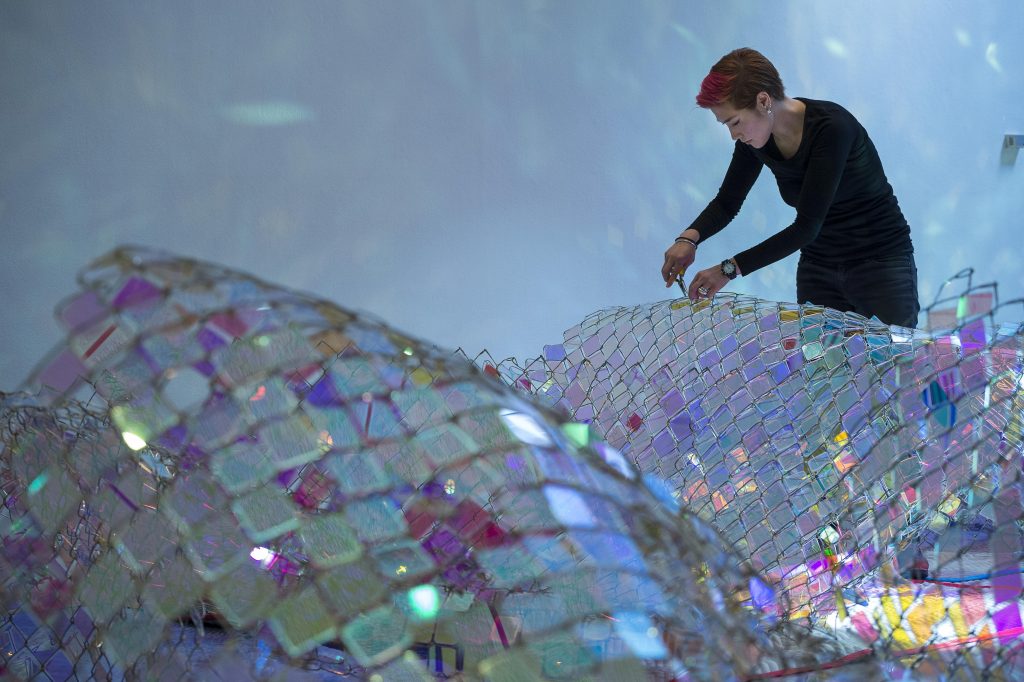 In addition to the commissions, other artworks will be scattered throughout the exhibition, including Stephanie Syjuco’s altered photographs of Filipinos put on forced display in “Living Villages” at the 1904 World’s Fair in St. Louis—shown alongside a pamphlet from the event from the Smithsonian collection.

But it is the five art commissions that will serve as anchors throughout the show.

For her piece Chultun El Semillero, Cortez was inspired by chultunes, underground storage chambers built by the Maya in pre-Columbian Mesoamerica. She’s filled her own welded steel versions with living plants, seeds, and other tools.

“She’s had the structure be excavated from the earth to create these future space time machines that are transporting knowledge and seeds and medicine to this indeterminate place in the future,” Molese explained. 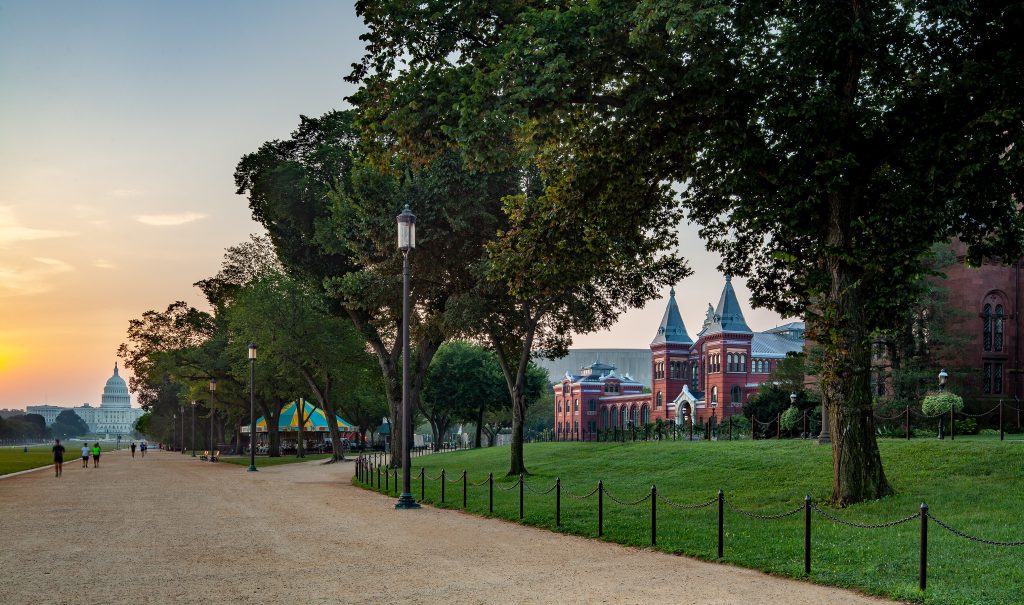 Thiel’s ReWildAR uses augmented reality to show viewers a Washington, D.C., that has returned to nature, transforming the halls into a re-wilded garden. The artist consulted Smithsonian horticulture experts to determine what the environment might look like if climate change continues unchecked.

“Tamiko was doing A.R. installations before anyone else was using that technology in the art world,” Molese said. “She’s imagining a moment in time in the future where… the landscape in Washington, D.C., has warmed and altered.” (Viewers can download an app to wander through the AR space, or use iPads provided by the museum.)

Shimoyama based his installation The Grove on utility poles, creating a sort of manmade forest where visitors can sit and reflect on the show and our more tumultuous recent history.

“You come to a kind of clearing where you’re greeted by these stunning bedazzled Swarovski crystal-covered totems,” Molese said. “It’s almost a mourning garden or a labyrinth.” 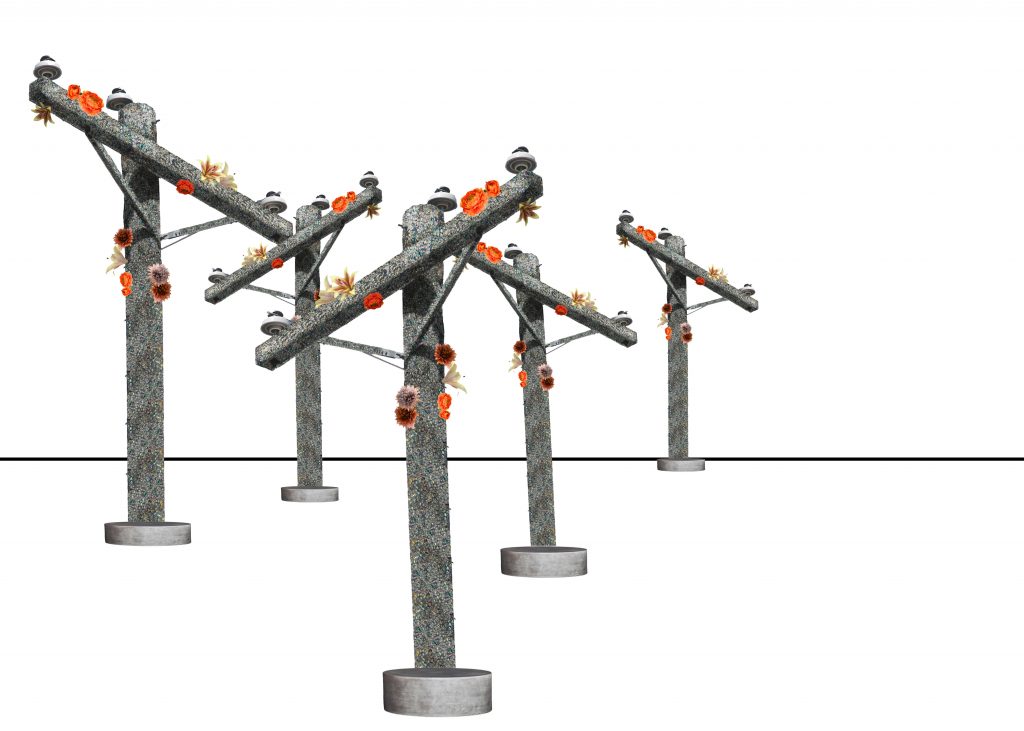 Devan Shimoyama, The Grove. renderings. Image courtesy of the artist.

Despite the many challenges facing our world and the creation of intentional moments of meditation, the exhibition strikes a purposely optimistic note.

“‘Futures’ is dedicated to a hopeful vision of a future that we choose, not one that we fear. We wanted to create it almost as a choose your own own adventure, defining pathways that build a more equitable, relatable, and inclusive future,” Molese said. “It was a very conscious choice not to be too dystopic in our vision.”