It turns out there are still more mysteries to uncover about the Dead Sea Scrolls.

The latest discovery, made with the help of artificial intelligence, is that the artifacts were likely transcribed by two different writers, despite the fact that all the handwriting looks similar.

“We will never know their names. But after 70 years of study, this feels as if we can finally shake hands with them through their handwriting,” Mladen Popović, a professor at the University of Groningen in the Netherlands and a member of the three-person team behind the study, said a statement. “This opens a new window on the ancient world that can reveal much more intricate connections between the scribes that produced the scrolls.”

Written on 17 sheets of parchment, the manuscript is 24 feet long and is the oldest complete copy of a book of the bible by about 1,000 years. Using A.I. pattern-recognition technology, experts singled out the Hebrew letter aleph, which appears in the scroll over 5,000 times, to identify the hand of two main writers, reports Courthouse News. 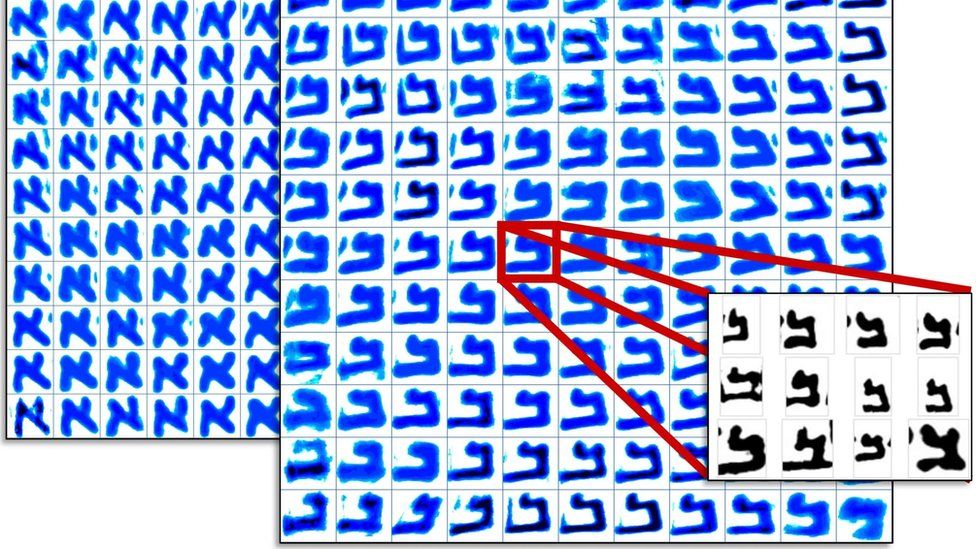 Kohonen maps (blue colormaps) of the character aleph and bet from the Dead Sea Scroll’s Great Isaiah Scroll used to analyze the handwriting. Image courtesy of Maruf A. Dhali, University of Groningen.

The initial discovery of the first Dead Sea Scroll by a Bedouin shepherd in the Qumran caves in 1947 proved one of the 20th century’s most significant archaeological finds. The scrolls, the earliest biblical manuscripts, are written primarily in Hebrew, with sections in Aramaic and Greek.

The new study is the part of European Research Council-funded €1.5 million ($1.8 million) “The Hands that Wrote the Bible” project. The first findings, published yesterday in the journal PLOS ONE, offer fresh clues as to the origins of the scrolls, which are believed to be the work of a Jewish sect known as the Essenes. 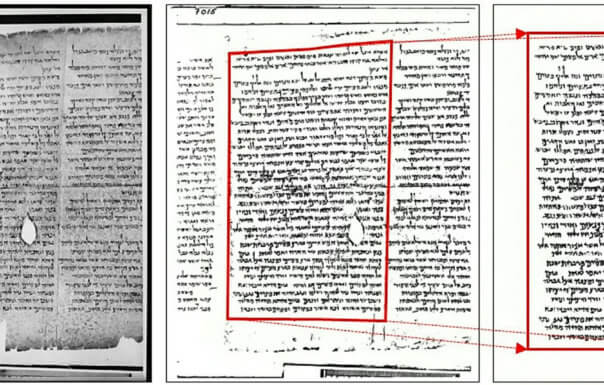 Greyscale image of column 15 of the Dead Sea Scroll’s Great Isaiah Scroll, the corresponding binarized image using BiNet, and the cleaned-corrected image. From the red boxes of the last two images, one can see how the rotation and the geometric transformation is corrected to yield a better image for further processing. Image courtesy of University of Groningen.

Examining each letter both as a whole and in microscopic detail, A.I. was able to identify minute differences in the way characters were formed.

The first step was using digital imaging to capture each aleph. Then, the researchers trained the algorithm to separate the inked letters from the papyrus or leather on which they were written. This process, called “binarization,” was achieved through a state-of-the-art artificial neural network and deep learning.

The A.I. then considered each alef’s shape and curvature to deduce information about the original scribe’s biomechanical traits, like the way they held their pen. “The ancient ink traces relate directly to a person’s muscle movement and are person specific,” the study’s co-author Lambert Schomaker said in a statement.

Comparing all of the alefs, the A.I.’s findings confirmed experts’ long-held suspicion that the writer of the Great Isaiah Scroll likely switched about halfway through. “With the intelligent assistance of the computer, we can demonstrate that the separation is statistically significant,” Popović said.

The similarity in the handwriting suggests that the two scribes received the same training, possibly at some kind of ancient scribal school. (It is also a possibility that the differences could be attributed to a single writer getting fatigued, changing writing instruments, or getting injured, but the two-scribe explanation is the most straightforward.)

There are plans to conduct further A.I. analysis on other Dead Sea Scroll text using the same methodology. 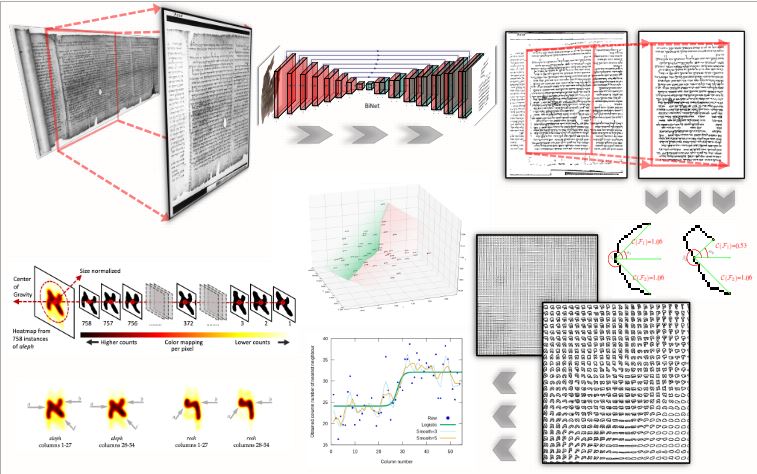 Analysis of handwriting in the Great Isaiah Scroll, the longest of the Dead Sea Scrolls. Image courtesy of Mladen Popovic, University of Groningen.

The new findings come one month after Israel announced the discovery of the first new set of fragments from the ancient manuscripts in 60 years, unearthed from the so-called “Cave of Horror,” home to the bodies of Jewish families who died under siege during the Bar Kokhba revolt in the first century.

“These Dead Sea Scrolls are like a time machine,” Popović told the New Scientist. “They allow us to travel way back in time, even to the time that the Hebrew Bible was still being written.”