Welcome to Shattering the Glass Ceiling, a podcast from the team at the Art Angle where we speak to boundary-breaking women in the art world and beyond about how art has shaped their lives and careers.

In the first episode of this four-part podcast mini series, Midnight Publishing Group News executive editor Julia Halperin spoke to Lauren Haynes, the director of artist initiatives and curator of contemporary art at the Crystal Bridges Museum of American Art and the Momentary in Arkansas. In June, she will take on the role of Patsy R. and Raymond D. Nasser senior curator of contemporary art at the Nasher Museum of Art at Duke University.

Haynes, who was born in East Tennessee and grew up in New York, has worked in museums including the Brooklyn Museum and the Studio Museum in Harlem, curating distinctive and influential shows on artists like Alma Thomas and Stanley Whitney. She has worked at Crystal Bridges since 2016, where she helmed the first U.S. presentation of the exhibition “Soul of a Nation: Art in the Age of Black Power” (2018), which traveled from the U.K.

Below, read an excerpt of their conversation.

What is your earliest memory of encountering art? Was that in New York?

If we think about art in the widest sense, it would be watching my sister dance. She was part of the dance company in our town in Tennessee and was very good. I was not good. I tried to take dance lessons and got kicked out because I didn’t follow the rules.

What about your first museum experience?

My first museum experience honestly didn’t happen until I got to college. I went to Oberlin with the intention of becoming a lawyer. I had visited and sat in on some constitutional law classes and fell in love with it, but when I got to school I needed a work study job and found one at the Allen Memorial Art Museum on campus. 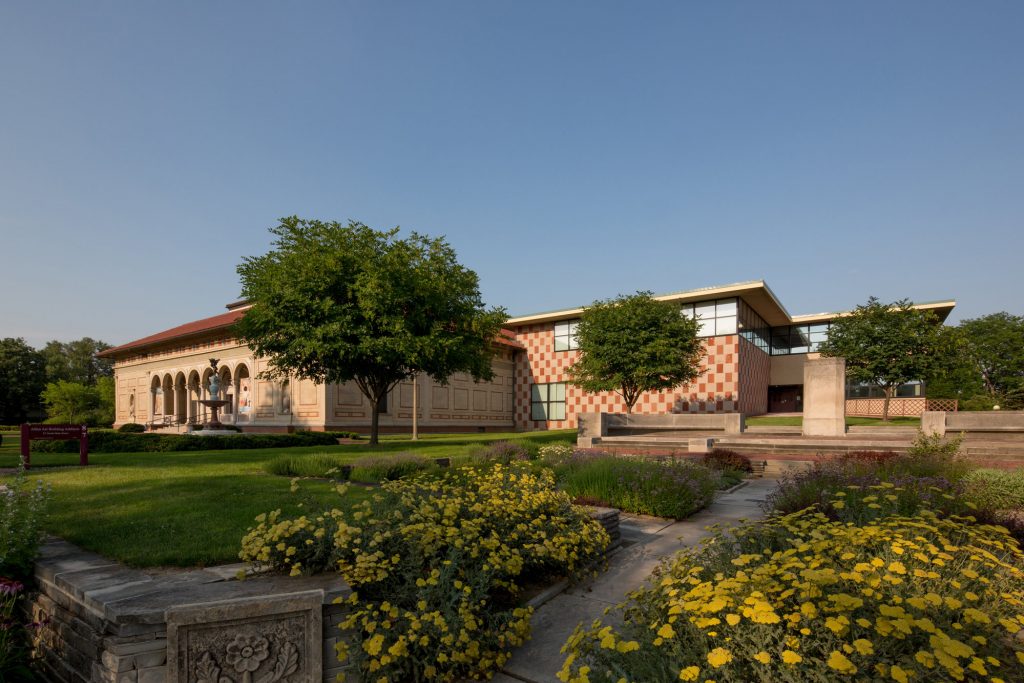 At the time, I didn’t know, but it’s an amazing museum, and I ended up working as the director’s assistant. At the time, Sharon Patton was the director of the Allen, and Sharon was an African-American woman who literally wrote books on African-American art history, so my first experience was seeing a Black woman running the place. That’s when I first was like, “Okay, this is a space that people who look like me can be in.”

At what point did you decide to pursue art as a career?

It was fairly quickly actually, because I continued to take art history courses, and through an Oberlin alum I was able to work at the Charles Cole art gallery in New York, which no longer exists. So I had that experience and quickly learned that I wasn’t necessarily going to work in a gallery, but having more exposure to art helped me realize that there are jobs in this field.

What have you learned about what makes a nurturing environment for creative thinking?

Very early in my career I was blessed with amazing bosses. My first boss was Terry Carbone, who at the time was the curator of American art at the Brooklyn Museum and she sort of took me under her wing and helped me learn the job, but also learn the museum itself and what it meant to even be close to watching the curatorial process. 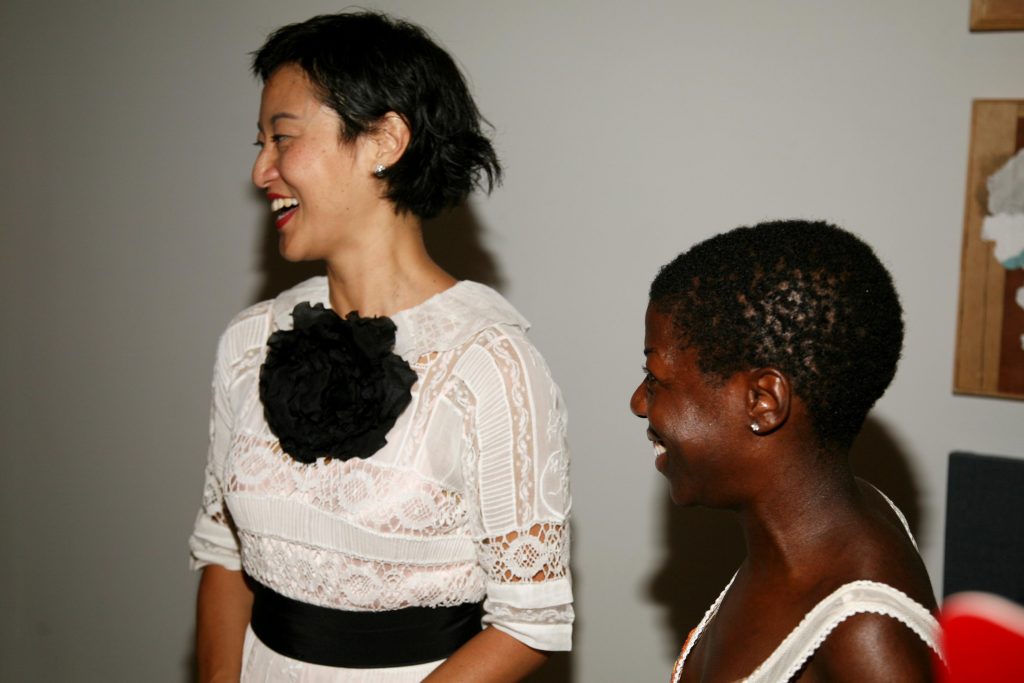 That experience was very brief. I was there for around nine months and then a job at the Studio Museum opened up and I started there as a curatorial assistant working with Christine Y. Kim and Thelma Golden, who of course was chief curator and director. Staying at the Studio Museum and working with Thelma more closely I learned that you need an environment—particularly when you’re working in a creative field where you’re trying to sell people on your ideas, and get people excited—where it’s okay if your idea isn’t fully formed, but you have people to bounce ideas off of in a way that doesn’t feel competitive. It’s important to also have people around you who will say, “No, that’s not quite it.” You need a place where you can be vulnerable and where not every idea has to be a winner, because that’s just not possible.

Can you think of an idea that you developed that was either received as a “No, not now,” or rerouted in a way that ended up existing in another reality?

One project that comes to mind was the Alma Thomas exhibition that I worked on at the Studio Museum. I co-curated that with Ian Berry at the Tang Teaching Museum at Skidmore, and worked closely with the collection to get to know some of the works there. 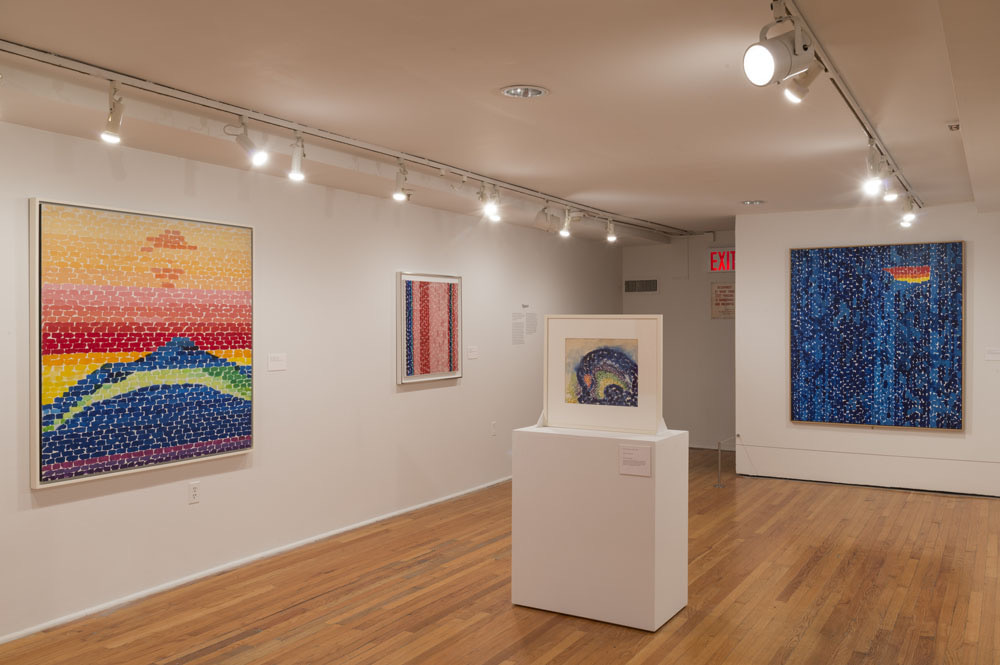 I was obsessed with some of the small works in the collection but could never really pinpoint what the right thing was, and so having conversations with Thelma and with the team, it was always, “Maybe, but not quite yet.” Pairing up with Ian who was having similar conversations and wanted to do an Alma Thomas exhibition, it really just struck us as the right moment for both institutions. It takes timing, but also being persistent about ideas, not just with your institution but also with yourself.

You’ve spoken about a couple of different women that you’ve worked under when you were getting into this field and I wonder if you could pull out one or two mentors who have really shaped the way you think and what you took away from these experiences.

Consistently, for at least the past 10 years, Thelma Golden has stood out for me, and for many others in this field, particularly Black female curators and curators of color, as an inspiration.

Thelma has given me a lot of advice over the years, but one of the things she said that stood out was, “Lauren, there’s no one way to be a curator. You very much have to find your own path and it doesn’t necessarily have to look like someone else’s.” And that is advice I give to my own team, to my colleagues. It seems simple, but having someone who is established in the field and has carved a path for themselves and carved space for others, saying that makes a difference. 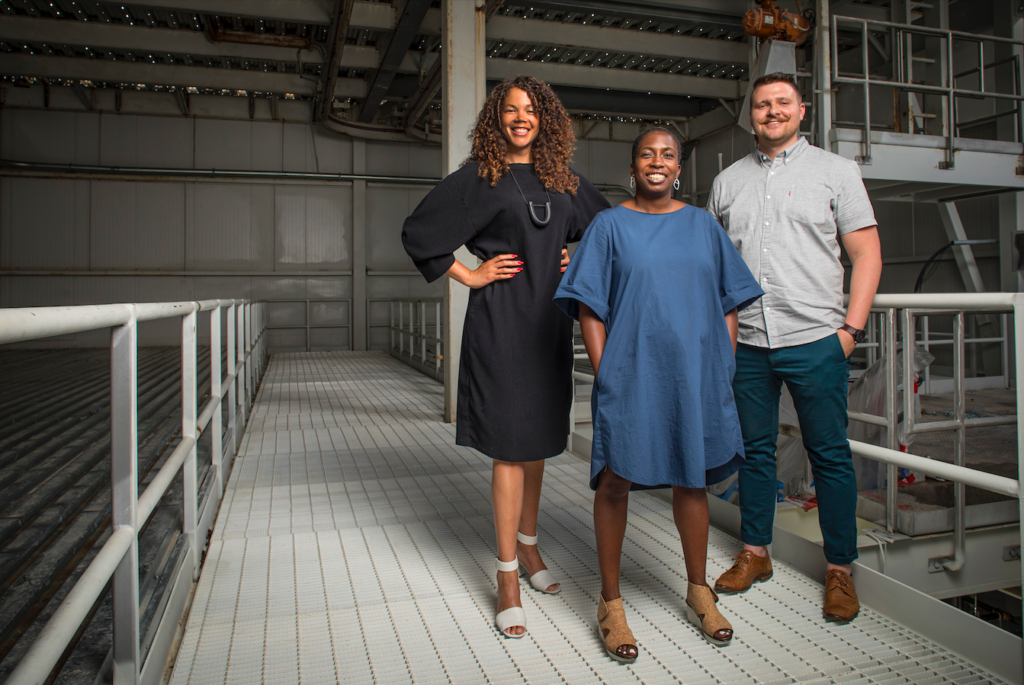 State of the Art 2020 curators (left to right), Allison Glenn, Lauren Haynes, and Alejo Benedetti at the Momentary, courtesy of Crystal Bridges Museum of American Art.

Are there choices in your career that empowered you to make different choices?

It’s less about specific choices and more about being open to different opportunities. Thinking for example, what does it mean to be a curator who’s not based in New York City, or what does it mean to think about working at larger institutions in scale compared to what the Studio Museum was when I left there and moved somewhere much bigger, like Crystal Bridges.

If I felt like I had to be on a strict path of working at certain institutions in New York, and only work with certain artists and do certain things then that would’ve been a very different career. For me, it was exciting to think about other opportunities and places where I could continue to do the work I’m interested in. 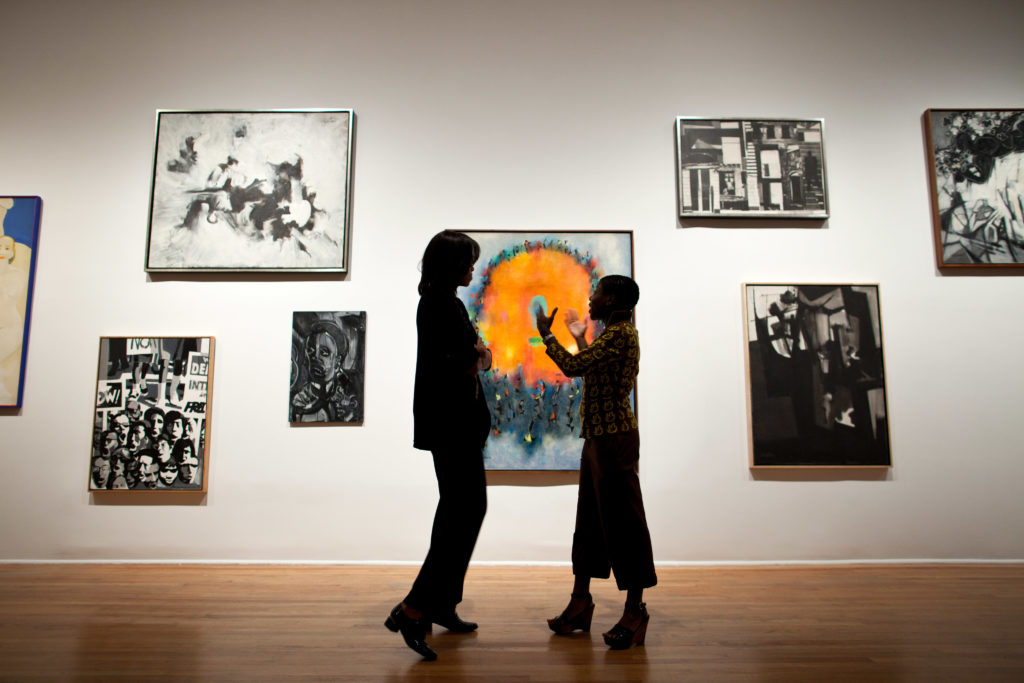 For people who may not know, can you describe the difference in size and approach between the Studio Museum and Crystal Bridges?

The Studio Museum was founded in 1950 is a museum that is dedicated and committed to artists of African descent and work inspired by Black culture. It is currently physically closed, but will reopen in a few years with a beautiful new building designed by David Adjaye. It’s located in Harlem and is really the place that many think of as the center of the Black art world in the United States, because of either the artists that have been through the program or the artists shown in the museum’s residency program, which is a core part of its mission. At the time I left there were around 50 people.

Crystal Bridges is a museum founded in 2011, so it’s approaching its 10th anniversary. It’s in Bentonville, Arkansas, and is an American museum, so more expansive in the artists that it shows but still focused on American art across time periods. It just opened a new space last year called the Momentary which focuses on contemporary visual art, but also performing arts and culinary arts. Across both Crystal Bridges and the Momentary there are around 400 people working. So there are big differences both in scale and in mission. 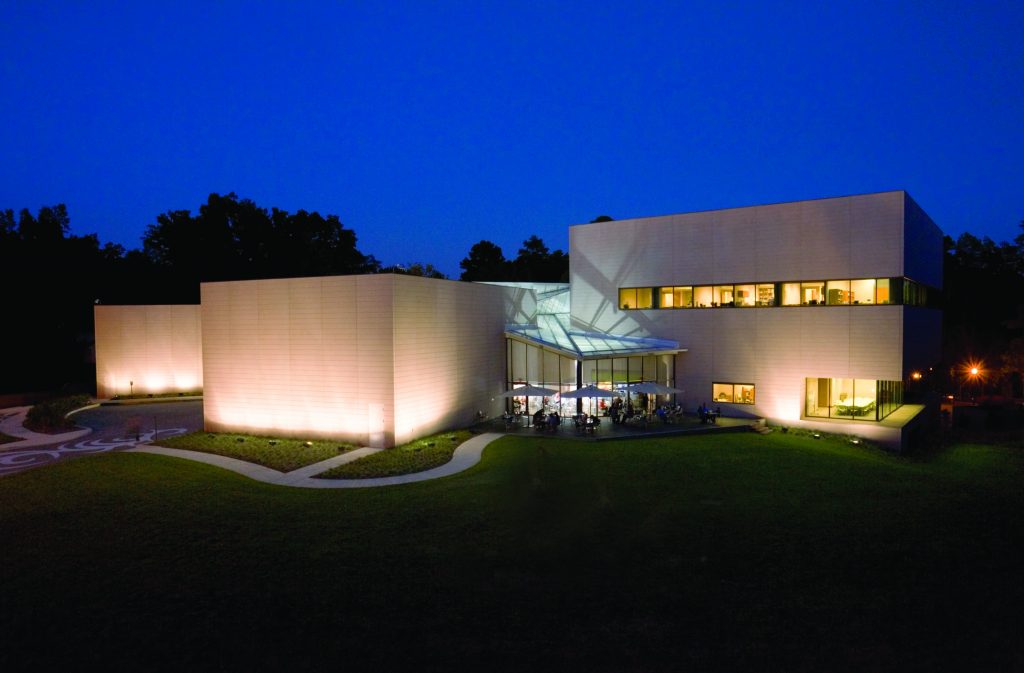 The exterior of the Nasher Museum of Art at Duke University. Photo by Chris Hildreth/Rooster Media.

I want to ask you about your new job, which is at the Nasher Museum of Art in Durham, North Carolina, at Duke University. That is a museum with a record for really excellent scholarly shows, particularly of contemporary art. So I wonder what drew you there and what you anticipate being able to do at the Nasher that you couldn’t otherwise?

My first real experience with museums was, as I said, at Oberlin’s Allen Memorial Museum, so I’ve always been interested in what college and university art galleries and museums can do and the work that comes out of there. I think that having students as an audience, and having a community as an audience is really something that is fascinating to me because of the formative experiences I had in that institution.

Very early in my time at the Studio Museum we put on the Barkley L. Hendricks “Birth of the Cool” show that the Nasher’s director, Trevor Schoonmaker, curated, and so I was able to work as a curatorial assistant and that was another formative experience for me. 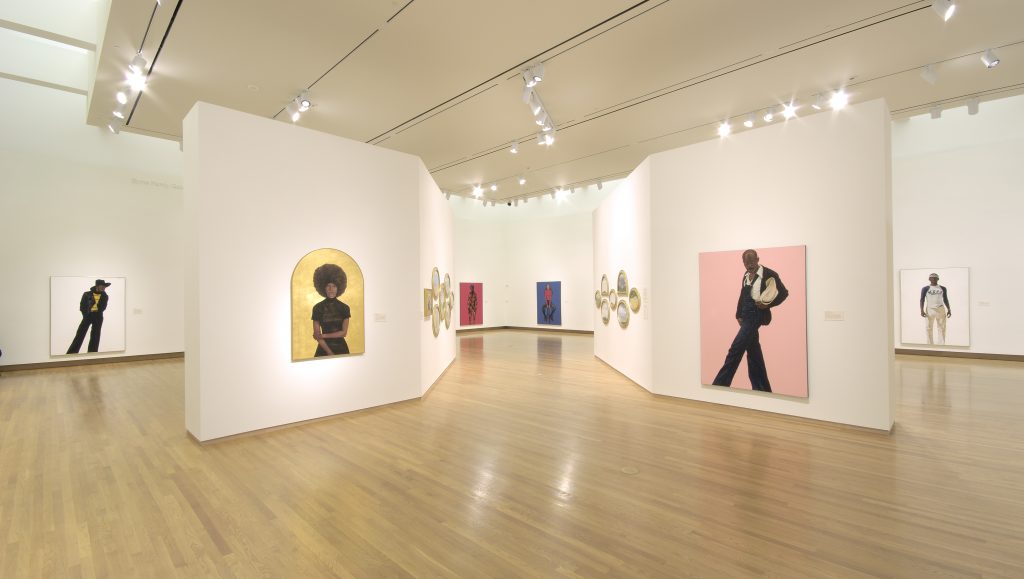 Installation view, “Barkley L. Hendricks: Birth of the Cool” at the Nasher Museum.

And can you explain who Barkley L. Hendricks was?

Hendricks was an African-American artist who painted members of his community, much of it based in Philadelphia, in the 1960’s and ’70s, that really speak to the Black experience. He was also a photographer, and if you ever saw him he always had a camera, or sometimes multiple cameras, around his neck, because that’s really how he experienced the world.

Being able to work on the show and meet this artist and get to know the team at the Nasher even when I was in such a junior position, really cemented for me the Nasher as an institution that made exciting and important shows.