Is Jeff Koons as Passionate About Uniqlo as He Sounds? Why Is This Unicorn Named After Picasso? + Other Questions I Have About the Week’s Art News


Curiosities is a column where I comment on the art news of the week, sometimes about stories that were too small or strange to make the cut, sometimes just thoughts on the circus. 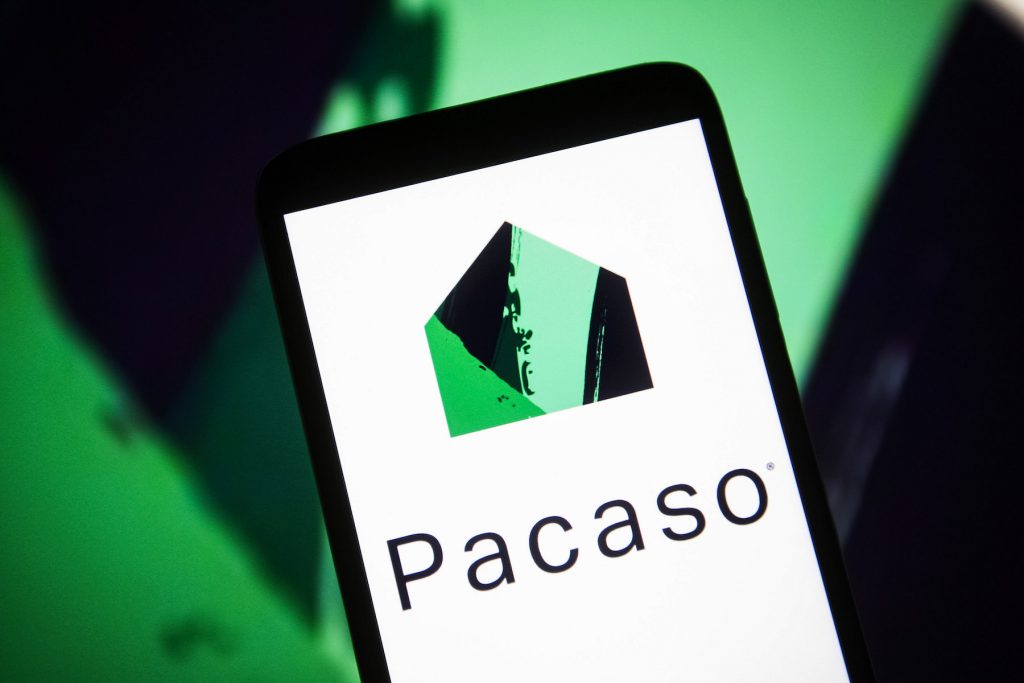 Founded only last year, Pacaso is, I’m told, the youngest start-up ever to reach “unicorn” status—a valuation of more than $1 billion. A glorified time-share scheme that promises to “democratize second home-ownership,” its mission is to finally let America’s wealthier enclaves know the joys of having your neighborhood become an Airbnb hotspot by selling fractionalized stakes in mansions in places like Napa Valley.

Since you are reading an art site, you are probably already wondering, “Is the name inspired by… you know…” The answer is yes. And the answer to your follow-up question—”does Pacaso’s innovative model of fractional real-estate investment carry on the legacy of Cubism?”—is also yes.

From the company’s Our Story page:

We are inspired by Pablo Picasso’s revolutionary thinking, the way he challenged norms in early 20th century art. He is credited with co-creating Cubism, which brings together individual elements to create a new and innovative whole. That resonated with how we’re approaching second home ownership. We decided on Pacaso to honor Picasso’s legacy of innovation.

And, truly, what an honor it is! Per Planet Money, “No Pacaso” signs are quickly becoming a hot accessory in the nation’s tonier areas. Some poor sap who bought 1/8th of a $4 million mansion recounts showing up for his slot at his new vacation home—which had been dubbed the “Chardonnay” house by Pacaso, and is described as having “a distinctly modern and high-tech feel”—only to be greeted by a sign that read, “The Pacaso House Is the Big One on the Right With No Soul.”

2) What’s Jasper Johns’s Flag Got to Do With Jurassic Park? 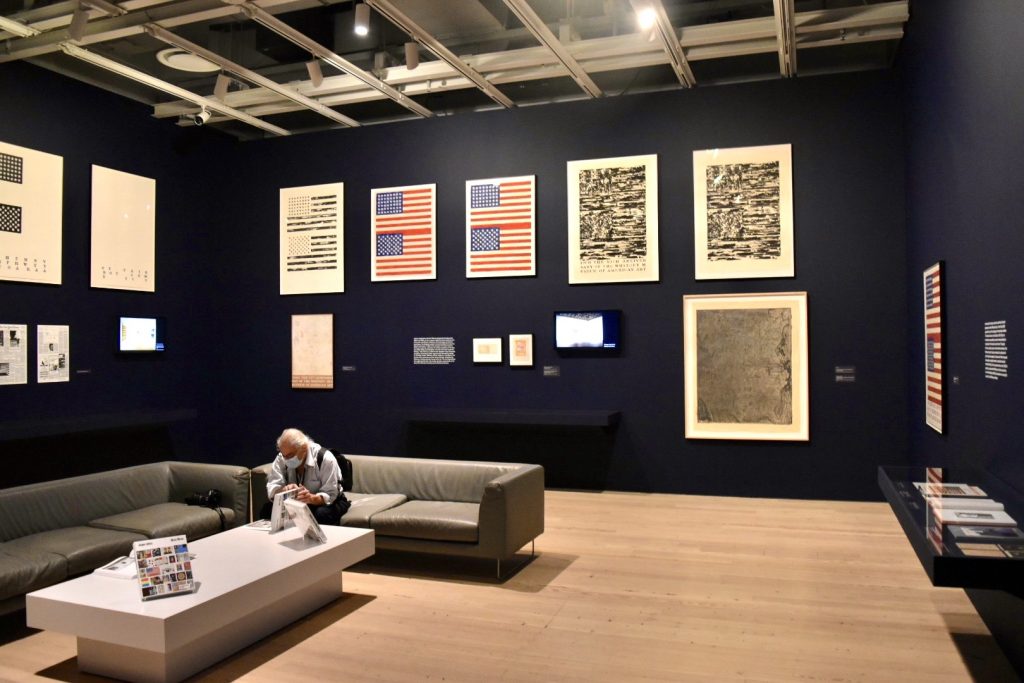 Here’s a bit of trivia I didn’t know until I went to the “Jasper Johns and the Whitney” room of the New York museum’s big Jasper Johns show. Just after Michael Crichton wrote and directed the original Westworld in 1973—but long before he wrote Disclosure, created ER, or became one of the world’s most high-profile climate-change deniers—he had a side hustle writing art catalogues. Specifically, the catalogue for Jasper Johns’s 1977 Whitney retrospective.

Let me tell you the story. Johns wanted someone to write about him who was “not an art critic.” By his own admission, Crichton had never read an art catalogue. Asking around, he couldn’t find anyone who had ever actually read a catalogue either, and decided that what people wanted was facts about the artist and the works—“none of that art interpretation stuff.” 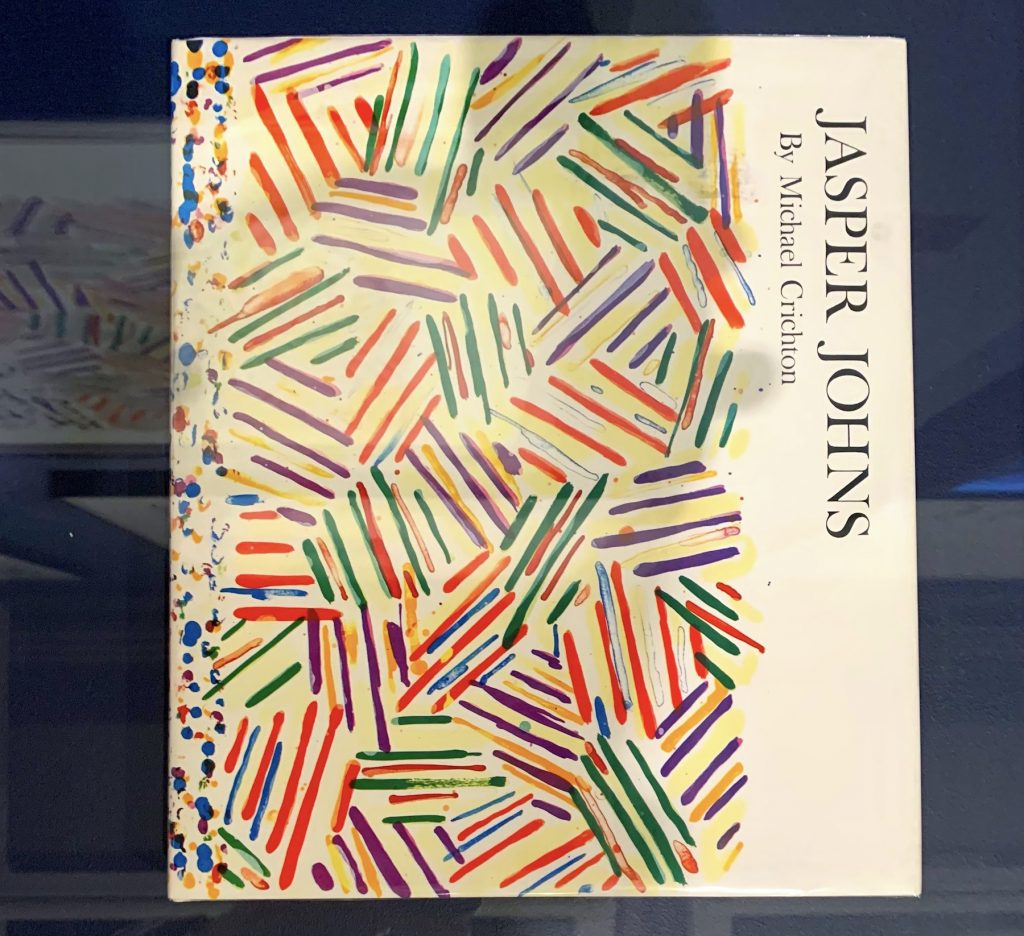 Copy of the 1977 catalogue for Jasper Johns’s Whitney show, on display at the Whitney. Photo by Ben Davis.

Honestly, this is not bad advice! I hate it when you open a catalogue looking some helpful historical context instead get 30 pages of musings on Giles Deleuze or Fred Moten.

Despite this “just the facts” approach, Crichton’s catalogue contains a pretty fun account of a car trip he took with Johns where the artist resolutely refuses to offer directions to get where they are going:

Once I drove him from his house at Stony Point into New York City. We were going to some destination I did not know. I asked him how to get there. “Well, I’m not sure, I’ll know when I see it, as we go.”

We drove for a while longer, crossing the George Washington Bridge. I asked again. “Well, I don’t know. Turn right here, and we’ll figure out the rest later.”

I love how closely the description of a Jasper Johns outing follows his well-known art-making mantra: “Take an object / Do something to it / Do something else to it [Repeat].” Or, as Crichton narrates Johns’s thought process, “We are going down this street now, and when we get to the end, we will decide which way to turn, and having decided that, we will wait until it is time to make another decision.”

Crichton accepted a small painting from Johns in lieu of payment, and according to author Don Thompson, he later turned down $5 million for it from Larry Gagosian. For that reason, the 1977 Whitney Museum catalogue is sometimes regarded as the most lucrative piece of art writing ever done.

3) Is the Male Gaze in the NFT World Really Going to Be Decentered by Playboy?

Playboy has enthusiastically gotten into the NFT game. On the one hand, it is looking to sell its back catalogue of vintage cheesecake as NFTs; on the other, it is out to smash the patriarchy.

Specifically, the magazine has partnered with the Sevens Foundation on a new NFT commission (open to applicants through October 1!) called “The Art of Gender and Sexuality.” The initiative, we read, recognizes that “the fight for equality and representation that continues to define the art world at large is particularly urgent in the fast-moving world of NFTs, a primarily cis-male dominated space.”

I would make a joke here about how “I support Playboy for its social justice mission to decenter the digital art world” is the new “I read Playboy for the articles,” but, you know, Playboy did publish some pretty good articles.

“Sophisticated pop artworks by one of the greatest contemporary artists, Jeff Koons!” boasts the website of Uniqlo, the fast-fashion juggernaut from Japan that has just launched a Koons capsule collection in coordination with the soon-to-open “Jeff Koons: Lost in America” show in Qatar.

The exclamation point certainly proves they are excited—but what’s so “sophisticated” about these works?

Craft, craft, it’s all about craft, according to the interview with Koons on the project’s micro-site (which also features interviews with curators Massimiliano Gioni, Elena Geuna, and Yuko Hasegawa). We’re talking here about the craft of… printing pictures of Balloon Dog and Rabbit onto basic cotton Ts and hoodies.

Here’s Koons waxing Koonsian about the globe-spanning merch collab in a series of words that sound as if they have been put into Google translate from English to a foreign language and back again (but he speaks with such conviction!):

I enjoy very much how Uniqlo is in contact with my generation but also a younger generation and it really communicates across cultures and everybody enjoys very much their clothing. We are just people who are seeking to be connected with each other. By working with Uniqlo, making a T-shirt that can be connected and communicate to somebody else that I care about them—I embrace that opportunity.

Of the collection’s various options, my favorite has to be the Jeff Koons sweatshirt featuring his work Play-doh (1994–2014). Not exactly pushing the boundaries of graphic design, as far as I can tell, it offers the giant words “JEFF KOONS” next to an image of sculpture.

I assure you that as a work of art, the massive, precision-designed Play-doh actually is impressive and huge and detailed in its craftsmanship. But rather than seamlessly “communicating across cultures,” when its image is printed without scale on a shirt, like nothing so much a sturdy pile of rainbow doggy-doo (maybe from Flower Puppy). 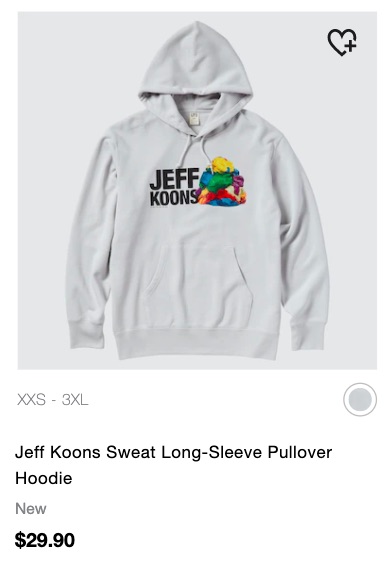