Is a Bored Ape Tattoo the Ultimate Flex? Since When Is Uranium in a Museum Not OK? + More Questions I Have About the Week’s Art News


Curiosities is a column where I preserve for posterity the “you can’t make this up” parts of the art news.

1) When Will This Outbreak of Bored Ape Fever Peak? 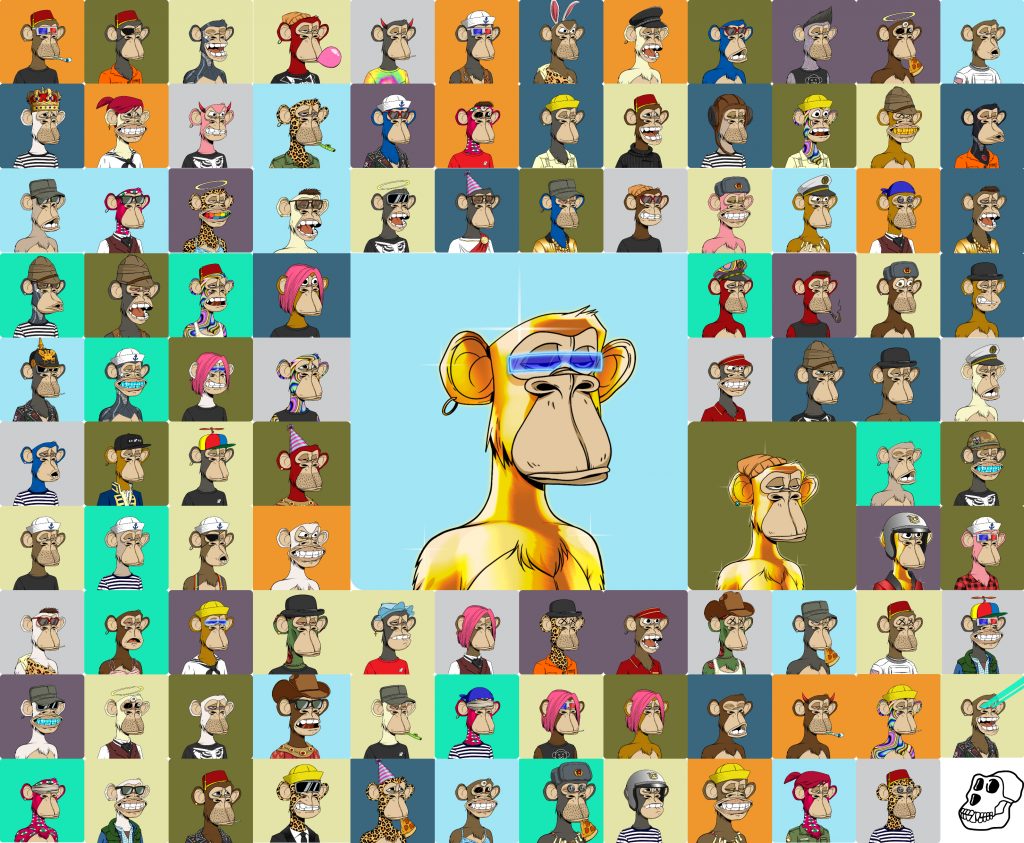 A collage of the Bored Apes offered up in Sotheby’s “Ape In!” sale this week. Courtesy of Sotheby’s.

The 277-year-old auction house referred to the sale as “a testament to the enthusiasm and the strength of the close-knit BAYC [Bored Ape Yacht Club] community.” We are talking about a community whose roots run deep—all the way back to April 2021, making it a venerable classic, with the same deep place in the cultural mind as the Justin Bieber song “Peaches” or the bad new “Mortal Kombat” remake.

Amy Castor has written a great explainer on the Bored Apes, whose most high-profile collectors include Jermaine Dupri and AriZona Iced Tea. I was curious about this “close-knit BAYC community,” so I looked around the internet, and I can assure you that the 5,000-plus shrewdness of Bored Ape collectors (a group of apes is called a “shrewdness”!) is indeed strong and deep. Observing them egg one another on via Twitter has a bit of the vibe of watching a cocaine-fueled game of Truth or Dare at a meet-up of Adult Swim fans.

At this point, everyone wants a piece of the Bored Ape heat, and the hype is producing some very weird mutations. Perhaps the best thing I found in my casual investigation was this Bored Ape tribute rap from Raleigh, North Carolina–based ExtraGramKen.

It’s worth the price of admission for this great verse paying homage to the randomly assigned drip of the Apes alone:

I love the one that’s rocking the gold hair

So many clothes, my ape don’t know what to wear

Thus far, however, the Bored Ape anthem to beat is probably Bored Ape Rave Club, by mid-tier Dutch electronic act the Bassjackers. They’ve been cranking it every chance they get. Here they are at an outdoor venue in Ford Lauderdale last month.

According to the New Yorker, part of the appeal of the Bored Ape Yacht Club is that members feel like they are getting in on the ground floor of some great new IP that could launch a media empire like Disney. Whether these blank-faced, randomly bedecked simian avatars are the next Mickey Mouse and Donald Duck or the next 12 Oz. Mouse and Drinky Crow remains to be seen.

At least one aspiring webtoon serial, “Yawn of the Apes,” is making the case for BAYC as a vehicle for internet comedy, promising exciting appearances by “apes owned by top influencers in the NFT space (j1mmy.eth, Ronin The Collector, Pranksy) as well as cameos from your everyday NFTer.” Episode 2, “The Ape Factor,” dropped recently, and stars Ape #1092 screeching its way through a BAYC-themed singing show, giving ExtraGramKen and the Bassjackers a run for their money. It has the slightly desperate dada vibe of a lot of internet humor—but, you know, it’s not the worst thing I’ve seen (and it’s an improvement from the first “apisode”).

But perhaps the truest measure of the scene’s frothing enthusiasm is the rash of BAYC fans declaring their undying love for the five-month-old NFT initiative by getting inked with Bored Ape Yacht Club tattoos. I would go so far as to say that the bar has been raised: you are not a true Bored Ape stan unless you have made the definitive crossover from digital to IRL by permanently branding a Bored Ape somewhere visible on your body.

One collector known as @half_ape, who describes herself as a 26-year-old mother of two, posted on September 11, “I want to fill my arm with my favorite NFTs so when people ask, I can explain what an NFT is! And also because I want all this awesome art on my body.” She then showed off her fresh Ape ink.

If you are reading this and thinking that there is something slightly… cultish about the whole thing, well, after @half_ape posted a second image yesterday of her tattoo to prove it was permanent, a chorus of largely delighted BAYC fans took gleeful note of the assault rifle casually posed in the background.

So, I guess what I am saying is: Do not mess with the Bored Ape community. All hail our ape overlords.

2. What Could Go Wrong with a Museum Show Devoted to Deadly Toys? 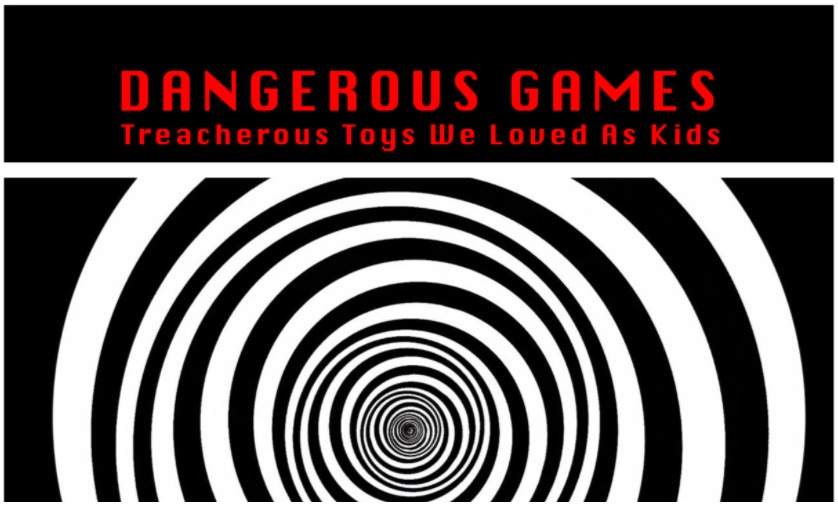 The promo for the Napa Museum’s “Dangerous Toys” show.

In Yountville, California, the Napa Valley Museum is scheduled open “Dangerous Games: Treacherous Toys We Loved As Kids” at the end of this month, billing it as “the original exhibition devoted to the wacky, whammo, wonderful world of the Slip ‘N Slide, Lawn Darts, Creepy Crawlers, Clackers, and other tantalizingly toxic toys.”

In an exuberant initial press blast, the show boasted that it would highlight the 1950s-era Gilbert U-238 Atomic Energy Lab, which sought to inspire children toward careers in the burgeoning field of atomic science. The kit offered samples of actual uranium ore for children to experiment with, as well as beta-alpha, beta, and gamma radiation sources, and a Geiger counter, among other instruments.

A warning on the original U-238 set cautioned potential lil’ nuclear scientists: “Users should not take ore samples out of their jars, for they tend to flake and crumble and you would run the risk of having radioactive ore spread out in your laboratory.” Teasing the show, Napa Valley executive director Laura Rafaty was reported to joke that “to be on the safe side… the museum may have the Napa Bomb Squad visit.”

Alas, the promise of exploring potential irradiation was not the light-hearted draw everyone had hoped. The museum soon issued a corrected press release labeled “OOPS! CLARIFICATION,” stressing, with undimmed enthusiasm, “There are no dangerous chemicals in the exhibit and we’ll let you know if we have to call the bomb squad!” Still, the show has already done its work of hearkening back to a simpler time, when exposing your child to uranium was considered excellent parenting.

3) What Is Going on In VR Machu Picchu? 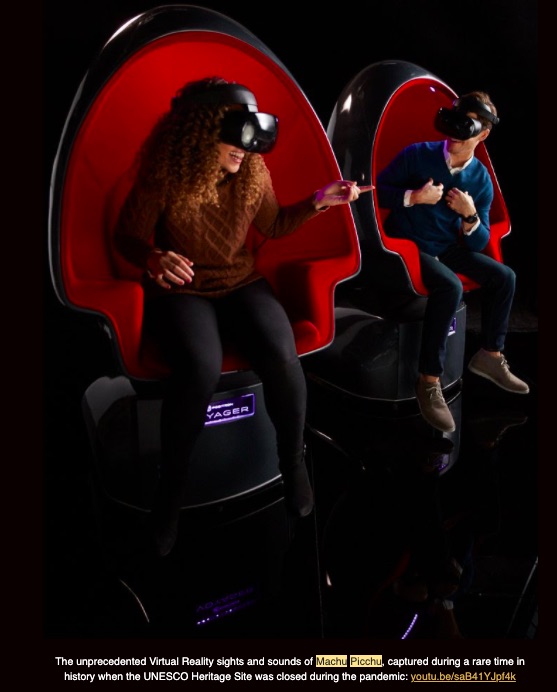 Via a press teaser for the big “Machu Picchu and the Golden Empires of Peru” show, opening October 16 at the Boca Raton Museum of Art, we get a promise of the “First-Ever Virtual Reality Experience of the Mythical Fortress in the Sky.” And let me tell you, you will never have as much flirty fun in your life as this couple immersed in the glories of VR Machu Picchu, as they (I imagine) behold the legendary Intihuatana Stone…

4) Are These Guys the Bob Ross of VFX?

Bob Ross fever remains almost as high as Bored Ape fever. And so, enjoy this video from YouTube’s Corridor Crew, digital effects artists who usually critique Hollywood special effects. In this very special ep, the team raced against each other to recreate a Bob Ross painting tutorial with digital animation instead of paint, in the same half-hour time frame. And darned if they don’t do it.

While substantially less soothing than watching the beatific Ross, the VFX duel is fun, and the bucolic landscapes they conjure have a kind of next-gen charm. Not to ruin the ending, but if you’ve always dreamed that someday worlds might collide in a Joy of Painting crossover with The Witcher 3: Wild Hunt—well, that day may be closer than you think!