So I went to the Beeple museum.

What, you say, is the Beeple museum? I refer to the B.20 Museum, built by the Metapurse fund, designed by Voxel Architects, and wholly existing within the online universe of CryptoVoxels.

Metapurse, an investment fund trying to get people into digital collectibles (NFTs), drew worldwide headlines earlier this month by purchasing a work called Everydays: The First 5,000 Days by the digital artist known as Beeple, aka Mike Winkelmann, for $69 million at Christie’s. At the time, a rep from the fund told my colleague Eileen Kinsella that Metapurse was planning an all-online monument to the piece.

But we don’t need to wait to see what this might look like. Because previously, Metapurse paid $2.2 million for the bragging rights to own a suite of Beeple’s freaky-deaky digital images back in December. They then contracted Voxel Architects, designers specializing in virtual creations, to build them virtual museums to showcase their trophies in a variety of online universes, including CryptoVoxels. The resulting B.20 Museum debuted in January, along with similar museums in the rival worlds of Decentraland and Somnium Space. 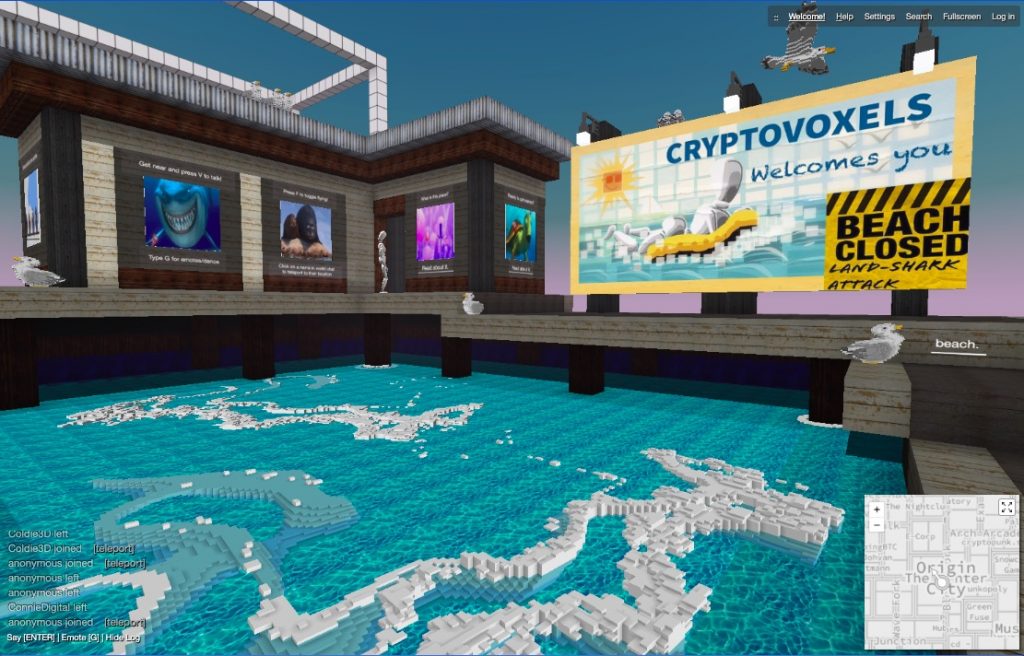 Screenshot of the touchdown point in CryptoVoxels.

Maybe you recall Second Life, the online universe that was, essentially, a videogame without the game part, where you just build stuff and show off your creativity and hang out with others doing the same. A decade ago, the hype about Second Life was fierce enough that presidential candidates opened press headquarters in it.

The media-driven hype around Second Life, which always had only a fraction of the user base of more action-driven universes like World of Warcraft or EVE Online, has long since settled. CryptoVoxels is part of a new wave of start-ups trying to recapture the hype, but with a blockchain-enabled twist, promising users the ability to profit by buying land and trading their virtual creations in-game.

“I was inspired by Minecraft and loved the idea of a Minecraft city that is owned by its users,” Ben Nolan, lead developer of CryptoVoxels, once said. On the aesthetic level, that’s pretty much what you get—it’s a chunky, clunky world, not that much more dynamic graphically than The Sims from 20 years ago, and less polished than Fortnite now.

The fact that Metapurse has purchased virtual “land” to showcase their NFT art collection in places like CryptoVoxels is part of the fund’s pitch to investors. So I went and tracked down what they had built. 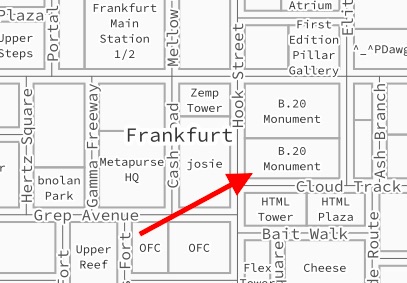 Screenshot of the map from CryptoVoxels, indicating the location of the B.20 Museum.

The B.20 Museum is located within the “Frankfurt” neighborhood of CryptoVoxels, adjacent to the “HTML Tower” and the “First Edition Pillar Gallery.”

As your avatar approaches, what you see is a large open lobby with some spindly neon pink trees. The center of the lobby is a series of what appear to be stairways to nowhere, which I at first tried to climb to the galleries, before realizing that they were intended to be decorative water fountains. 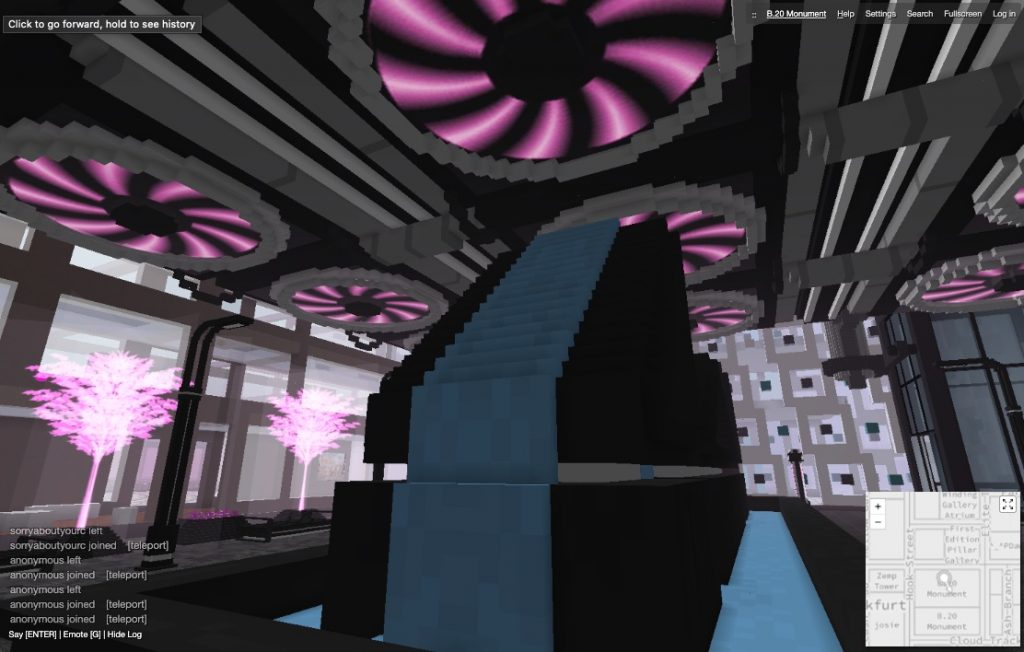 Screenshot of the lobby of the B.20 Museum in CryptoVoxels.

The ceiling of the lobby is embedded with numerous pixelated fans, which are supposed to suggest that the B.20 Museum itself is hovering unsupported overhead. To get to the virtual galleries where the Beeples are being “shown,” you have to enter an elevator, whose door dumbly opens and closes, as if it is broken. 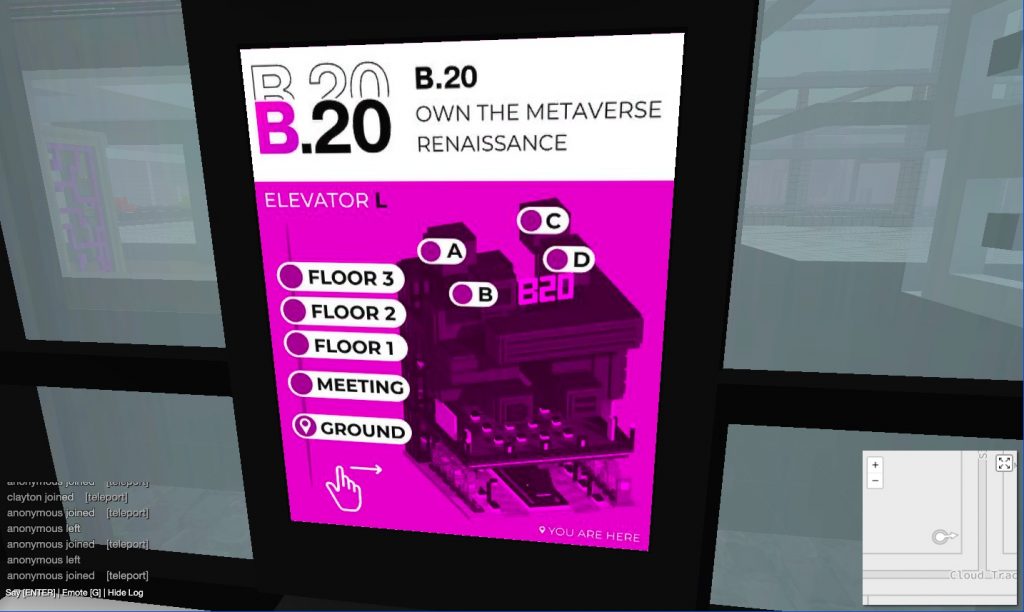 Screenshot of the map of the museum in the B.20 Museum elevator.

Instead of taking you up to the galleries in the manner of a conventional elevator, this elevator actually functions as a teleporter. Buttons on a map of the museum transport you automatically to its various levels. 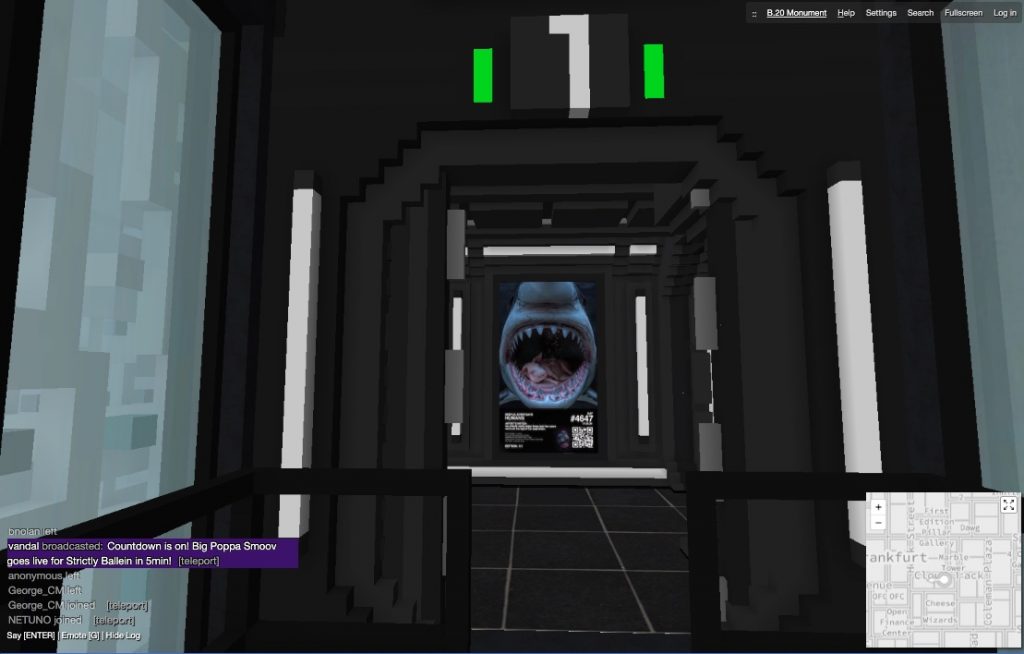 Exiting the elevator on Floor 1 of the B.20 Museum in CryptoVoxels.

Black and blocky with white accents, the interior architecture of the B.20 Museum resembles nothing so much as abandoned concept art for the Death Star in a Lego Star Wars videogame. 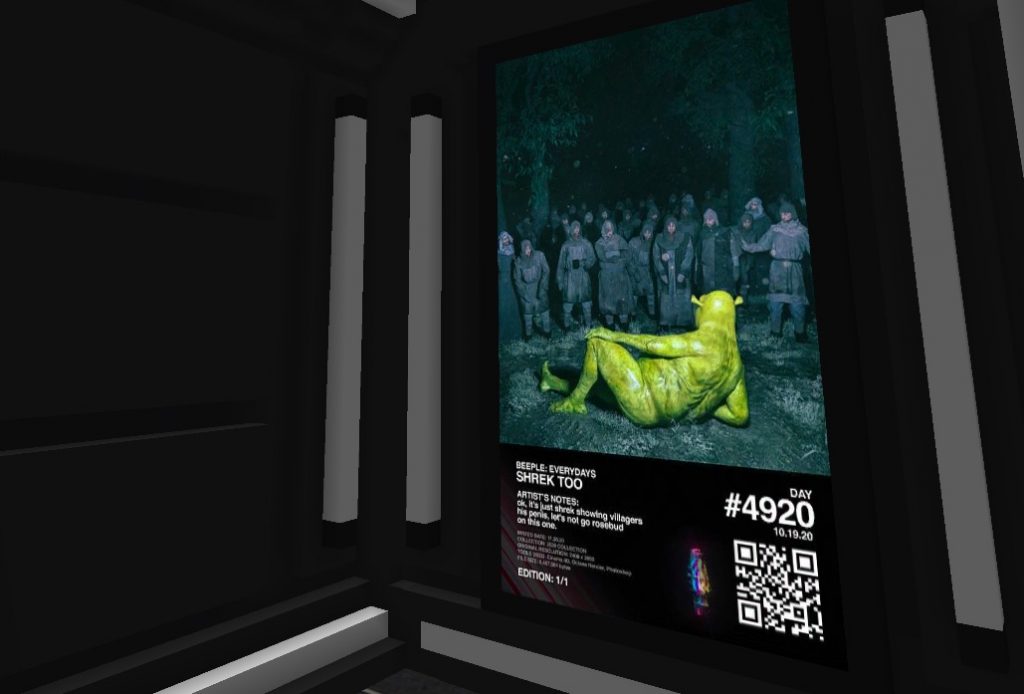 Screenshot of Beeple’s Shrek Too on display in the B.20 Museum.

Beeple artworks such as The Passion of the Elon (a giant, beautified Elon Musk being crucified) and Shrek Too (per Winkelmann, “it’s just Shrek showing some villagers his penis”) are mounted in the walls like paintings, their intricate digital nightmares playing weirdly off the blocky CryptoVoxels style of the architecture. 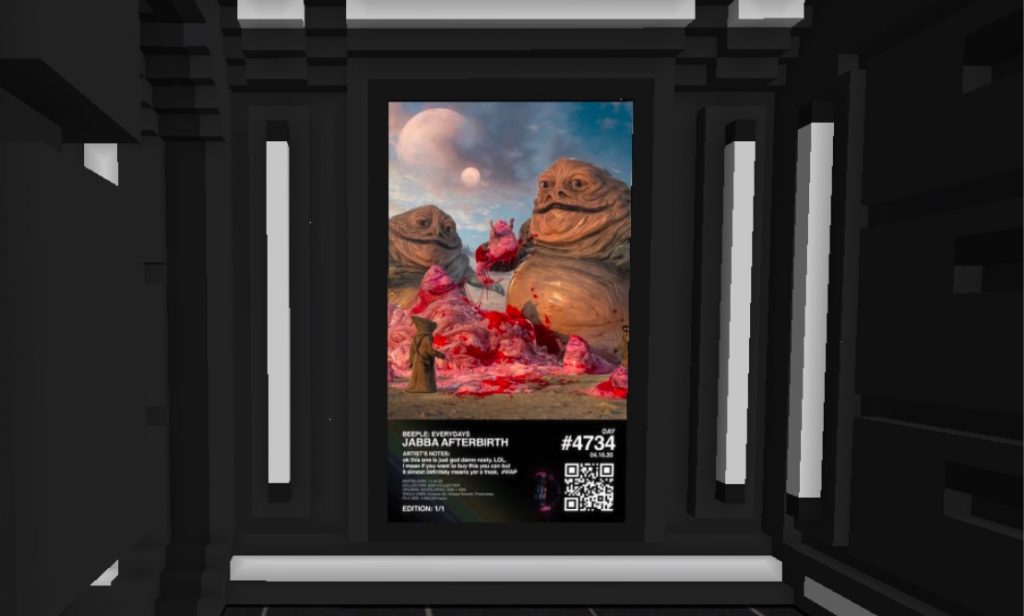 Beeple’s Jabba’s Afterbirth displayed in the B.20 Museum in CryptoVoxels.

The idea of showing all-digital art as if it were IRL art but in an all-digital space is already a funny little brain pretzel. Despite part of the cachet of this kind of very-online art being its outsider status, Metapurse’s postiche museum suggests an attempt to achieve the kind of framing that the idea of “museum art” puts around things—conveying the sense that these images are worth preserving outside of the mercurial conditions of their origin or that they reward contemplation if you spend time with them.

Yet if you actually do spend some time as an avatar wandering the B.20’s halls, it becomes clear just how vague this aspiration is. Its backers have poured more money than thought into museum-ifying Beeple. 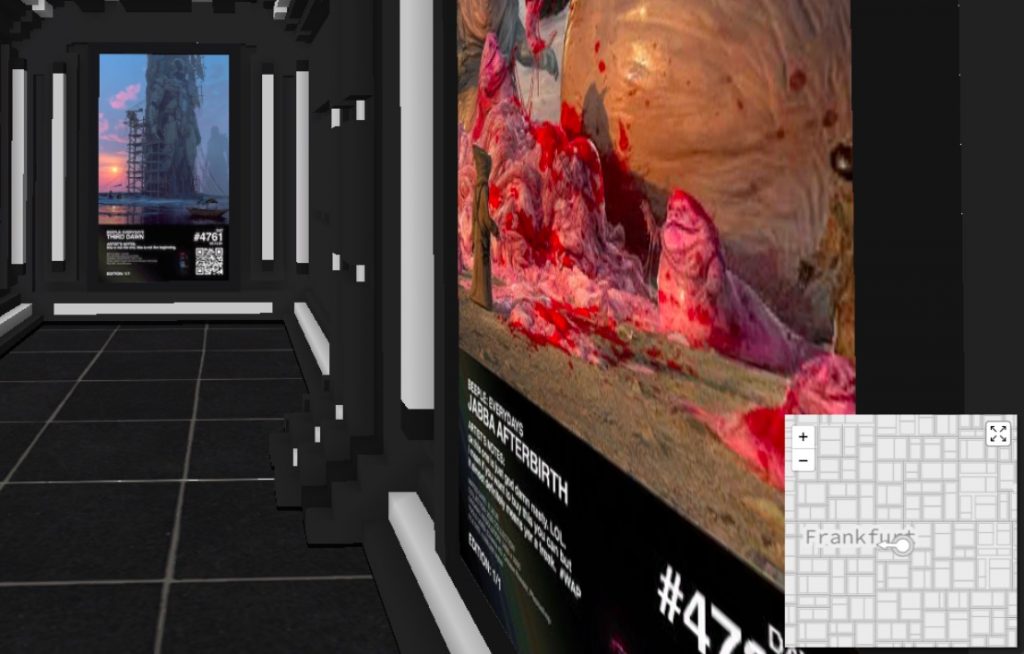 Screenshot inside the B.20 Museum in CryptoVoxels.

There is a reason that actual exhibition spaces generally consist of galleries—large open spaces—and the fact that the B.20 Museum is simulated doesn’t obviate it. Surrounding the artwork with space lets you see it from multiple angles and at multiple distances, and allows curators to juxtapose works to create narrative and contrast. 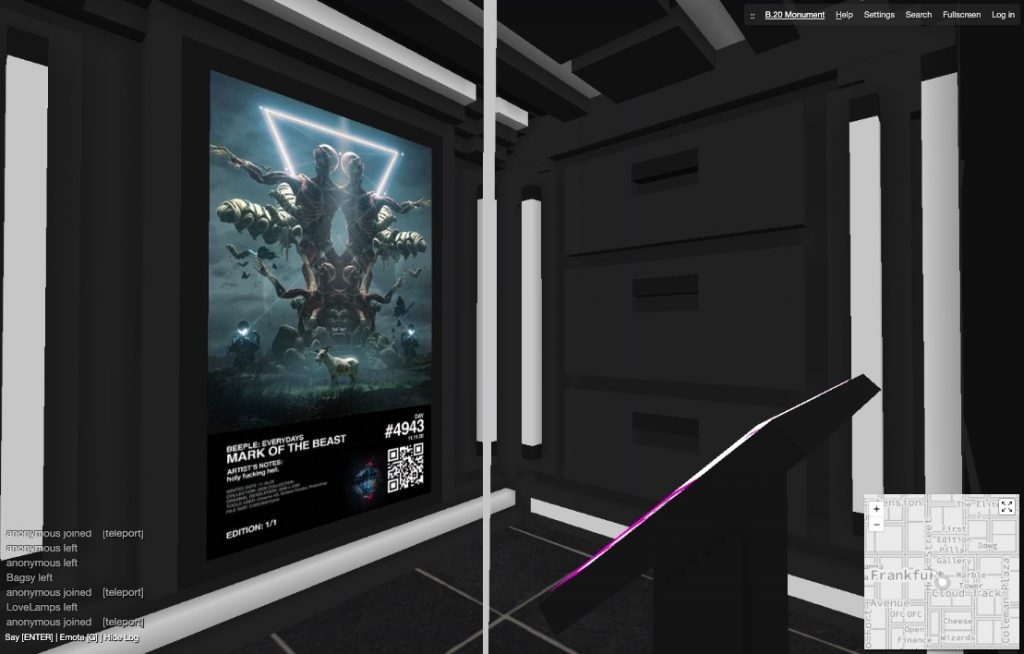 Screenshot of Beeple’s Mark of the Beast on view in Gallery D of the B.20 Museum in CryptoVoxels.

In a particularly baffling design choice, four of B.20’s Beeples are shown in stand-alone galleries that you have to teleport to separately (galleries A, B, C, and D on the map key), adding multiple distinct steps to what should be the simple task of considering them as a collection. Each of these virtual spaces is so tight that you can barely get distance to keep the Beeple in the full frame. It more evokes looking at art in my tiny Brooklyn apartment than being freed into some new world of unbridled imagination.

Creating architecture that smooshes you against the images is a particularly odd choice here, since seeing Beeple’s images in simulated 3D space this way is actually worse than just seeing them onscreen in the conventional way. At least on your phone you can pinch and zoom in on details. Here, the closer you get to the works, the more the images melt into digital mush. 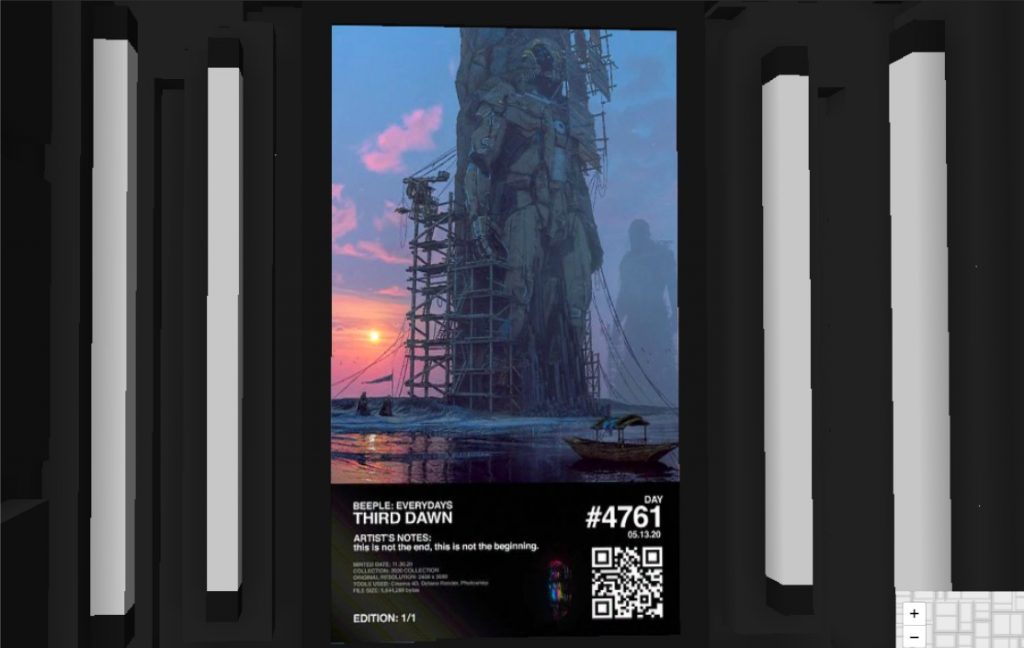 Beeple’s Third Dawn as displayed in the B.20 Museum in CryptoVoxels.

When you “walk” up to it, it looks like this. 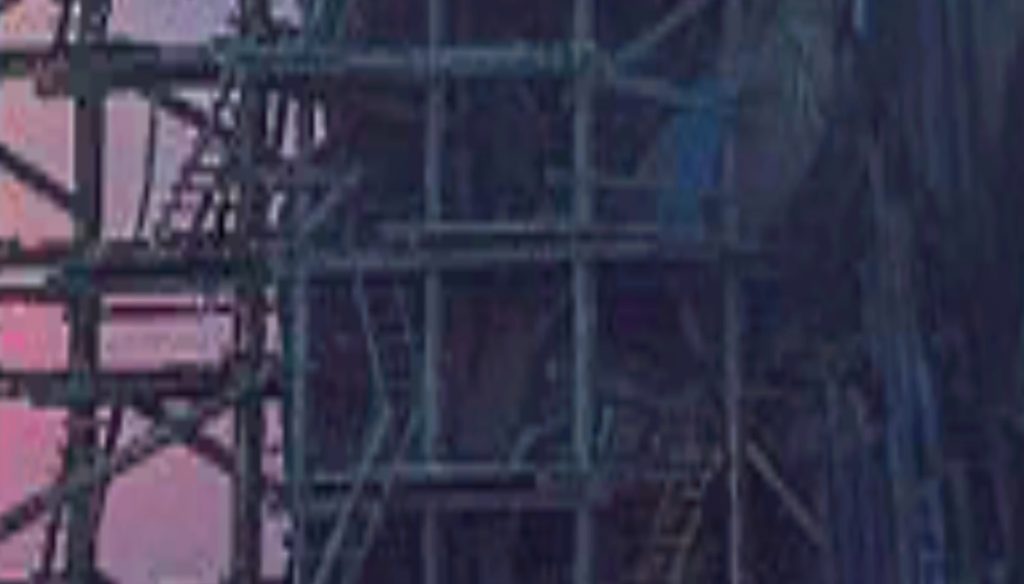 At maximum proximity, it’s just this. 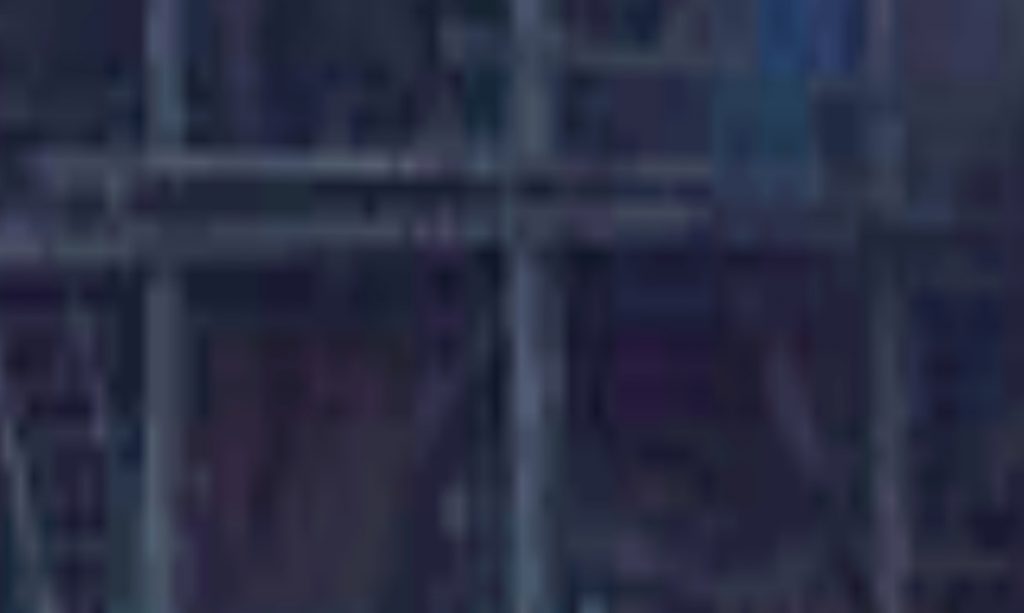 Of course, people don’t come to these Second Life-style worlds for the sophisticated digital aesthetics. They come for the community. In Second Life’s case, this has shrunk to be mainly a community of people exploring sexual stuff they can’t or wouldn’t do in real life. Whereas in CryptoVoxels’s case, the world is trying to build a community around the promise of blockchain-enabled riches.

But competition for audience online is fierce, and the active user base of CryptoVoxels can’t be much more than a few hundred people, and not more than a handful at a time. On a Wednesday afternoon, when I last strolled through the B.20, there was almost no one around, giving everything a forlorn, post-apocalyptic feeling. 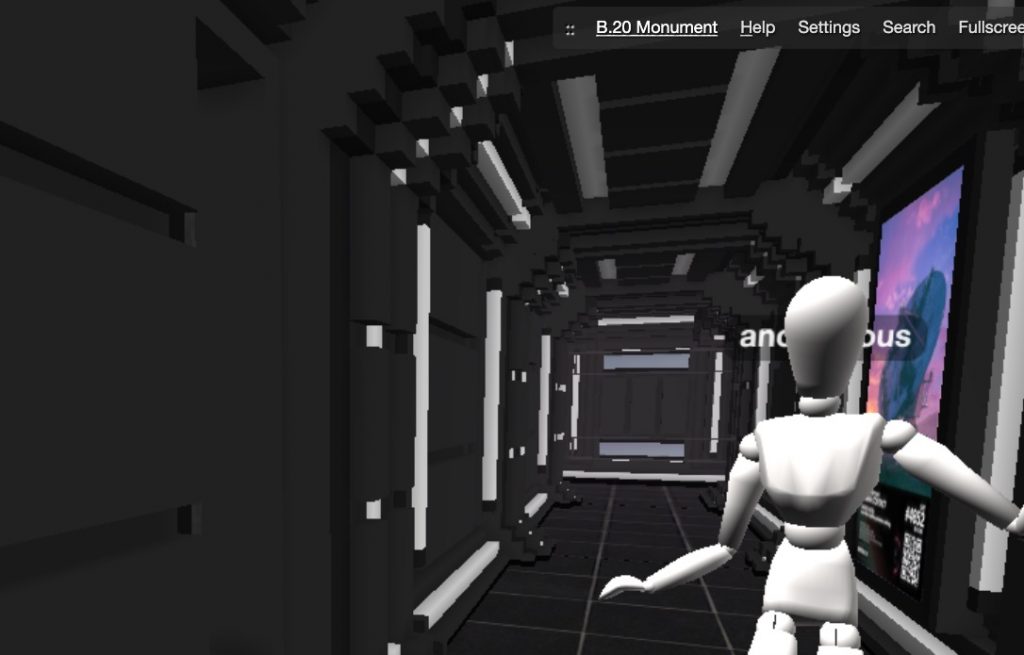 Another visitor at the B.20 Museum.

During my two visits, I saw exactly one other other figure flicker through the corridors of the museum. Like me, they were a newbie to the world, a fact you can tell because their avatar was just a featureless mannequin, a Giorgio de Chirico-esque touch for this empty, surreal space.

So, the B.20 Museum doesn’t really add much, aesthetically, to the Beeple experience. And it also doesn’t add much, socially. What does it add? What is this? What is the point? 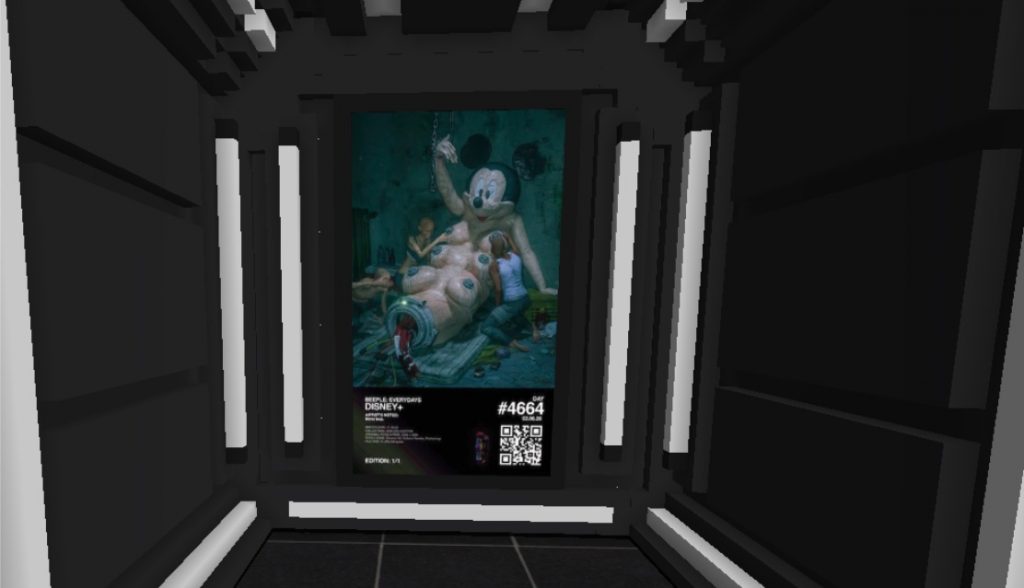 Beeple’s Disney+ on view in the B.20 Museum in CryptoVoxels.

The answer is easy to discover if we teleport back down to the lobby. There, prominently featured are various information kiosks. Rather than explaining anything about the art or the architecture, or who Beeple or Voxel Architects are, or how to best explore the space, you get a pitch for the B20 token, an investment scheme that allows you to bet real money on Metapurse’s bundle of digital assets, with the hope that it will appreciate in value over the long haul.

“Welcome to the first public art project of the Metaverse. Art belongs to everyone,” one kiosk entices. “The land, the build, the ambient music, the 20 artworks—these unique digital assets have been bundled and tokenized into B20s. You’re not just part of the Metaverse renaissance. You can now own it.” This copy is followed by a link to the Metapurse fund. 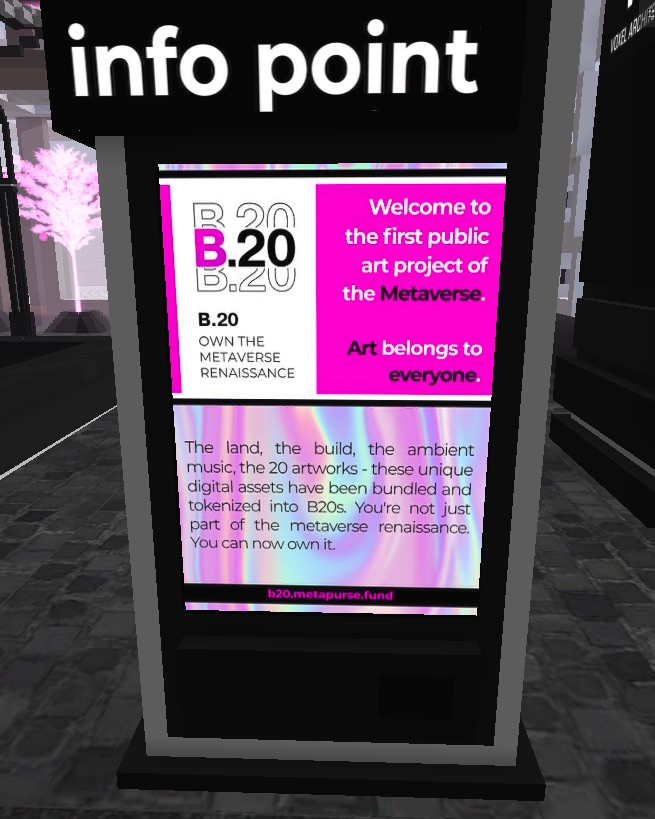 Screenshot of an Info Point in the B.20 Museum in CryptoVoxels.

A second kiosk incants the words “I WANT B20” in large letters. It explains, “This is an experiment in open experiences and collective ownership.” Then there’s another link to when you can buy B20 tokens. 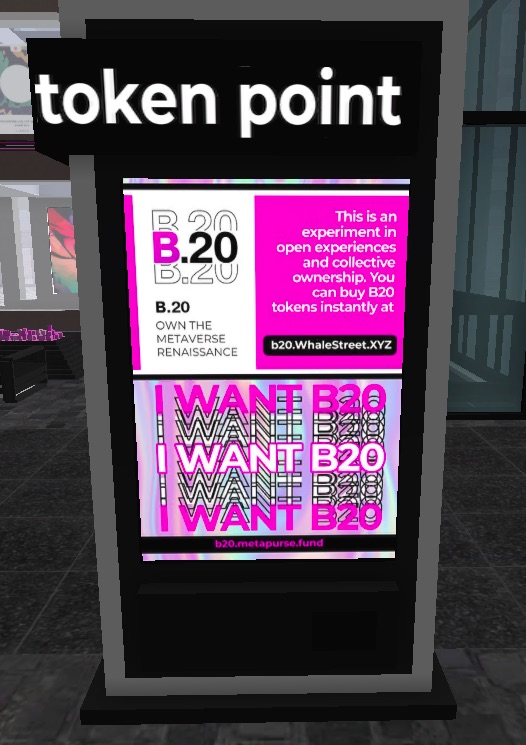 Screenshot of the Token Point kiosk in the B.20 Museum within CryptoVoxels.

It feels aggressively thirsty. For your money.

Now, I can’t quite decide what the angle is here. Is it to pitch the teeny-tiny but blockchain-positive user base of CryptoVoxels on investing in B20? Or is it more targeted at credulous newbies supposed to be wowed by the perfectly pedestrian idea of an online “museum,” even if, you know, no one really wants to spend their time with Beeple’s art like this and nothing stops anyone else, anywhere in this world or any other, from taking the exact same Beeple images and making their own, better digital shrine to them?

Either way, the actual effect is less like exploring some kind of exciting technological reinvention of the art experience and more like walking around an abandoned marketing kiosk at a cryptocurrency convention after the crowds have moved on. 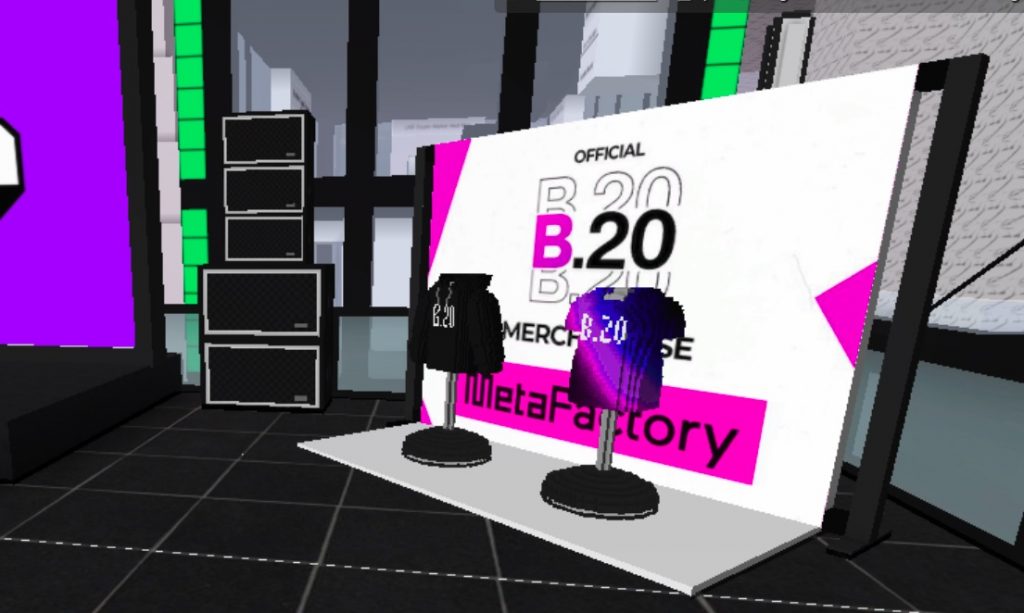 B.20 merchandise at the B.20 Museum in CryptoVoxels.

That vibe very much haunts the “Meeting” area of the B.20 Museum, a large open space one level above the lobby. There, giant banners advertise “Metapalooza” while a display offers up examples of virtual B.20-themed merch, for the true evangelists. There are also glasses left out everywhere, meant to represent digital champaign or perhaps some other pixel-based yellow liquid. 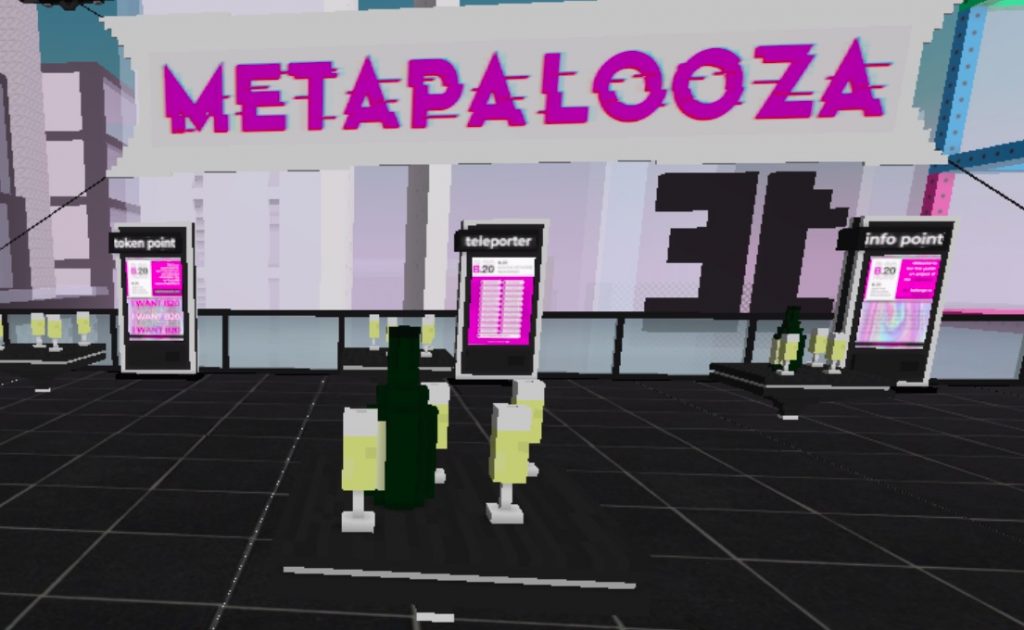 The “Meeting” area of the B.20 Museum in CryptoVoxels.

In art as in tech, FOMO is a very powerful emotion. With digital collectables, it’s driving a huge amount of capital and discourse right now. Everyone wants an invite to the part. Because, after all, the party you are not at is always the coolest party.

As it so happens, we do have images of the opening of the B.20 Museum back in January, which doubled as the launch of the B20 token. DJ 3LAU played for the virtual crowds, Beeple spoke, and Metapurse made its pitch to get people to put money into its bundle of immaterial real estate and art.

I’m almost afraid to share a picture of the party.