A 22-foot-tall bronze memorial to Dr. Martin Luther King, Jr. and Coretta Scott King will be unveiled next year in the country’s oldest public park.

Designed by artist Hank Willis Thomas with a team of architects from the MASS Design Group, the sculpture, destined for Boston Common, depicts two disembodied pairs of arms in a tender embrace—a gesture based on a photograph of the couple hugging after Martin Luther King was awarded the Nobel Peace Prize in 1964.

The Kings, Thomas said in a statement when his design was chosen, are a “monumental [example] of the capacity of love to shape society.”

Led by King Boston, a private nonprofit committed to furthering the legacy of the couple, the project has been in the works since 2016. The organization selected Thomas’s memorial from a shortlist of five proposals, including designs by artists Krzysztof Wodiczko, Adam Pendleton, and Yinka Shonibare, in 2019.

Now, the monumental artwork has an approximate launch date: October 2022, just in time for a Boston-based summit of music, arts, and civic educational work centered around issues and racial and economic justice.

The Embrace, as the memorial is called, will be installed on a new plaza named after Dr. King’s 1965 march from Boston’s Roxbury neighborhood to Boston Common. The event came a day after King spoke in favor of desegregating schools at a joint legislative session at the Massachusetts State House.

King Boston executive director Imari Paris Jeffries tells Midnight Publishing Group News that he hopes the memorial—which arrives at a time when the United States is reckoning with what kind of history its monuments tell—will “inspire a new civic narrative.”

“Boston has the opportunity to be the very first city in the nation to emerge post-vaccine as a place that embodies values of justice,” Jeffries says. “Now more than ever people want to ’embrace’ friends, loved ones, and each other. This is a symbol of that sentiment.” 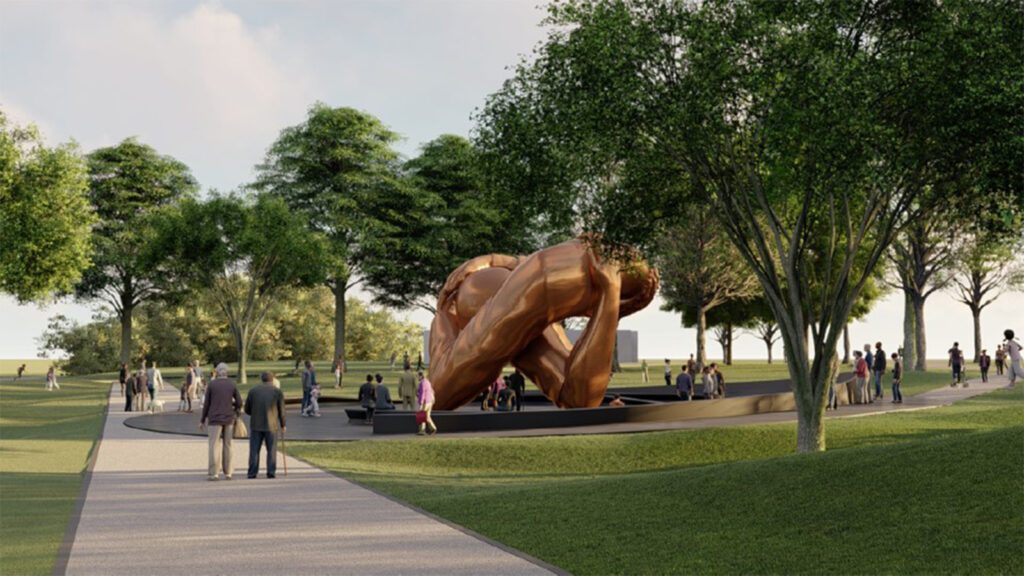 A rendering of The Embrace on the Boston Common. Courtesy of King Boston.

King Boston has raised some $12 million for the project so far, over half of which has come in since June of this year, according to the Boston Globe, when cities around the country saw Black Lives Matter demonstrations flood their streets. Jeffries and his team are hoping to secure another $3 million in private and corporate donations.

The urgency of this moment, Jeffries says, has only been underscored by the lockdown era, which has “exacerbated social inequality and revealed, as King reminded us, that we are tied together in ‘an inescapable network of mutuality’ and a ‘single garment of destiny.’”