Billionaire art collector, philanthropist, and entrepreneur Eli Broad—a towering figure in the cultural scene of the United States, and most of all, in his adopted hometown of Los Angeles—has died at 87. His reign culminated with the founding of the Broad, a contemporary art museum showcasing the collection he and his wife, Edythe Broad, built together, which opened in 2015.

In his cultural pursuits, business activities, and education and science philanthropy, Broad proudly proclaimed himself “unreasonable.” (The title of his 2012 book was The Art of Being Unreasonable.) He helped define what it meant to be a 21st century philanthropist, importing the kind of high expectations, metrics, and authority he embraced in business into his charitable activities. This approach, which he has described as “venture philanthropy,” made him widely influential—and also divisive.

“Eli saw the arts as a way to strive to build a better world for all,” Joanne Heyler, the founding director of the Broad, said in a statement. “He was a fiercely committed civic leader, and his tenacity and advocacy for the arts indelibly changed Los Angeles.”

Broad died at Cedars-Sinai Medical Center in Los Angeles, according to his foundation. The cause of death has not been given, but comes after a long illness.

With a net worth estimated at $6.9 billion by Forbes, Eli made his fortune in the home construction and insurance industries, founding Kaufman and Broad Home Corporation and insurance company SunAmerica. He is the only person to found Fortune 500 companies in two different industries. 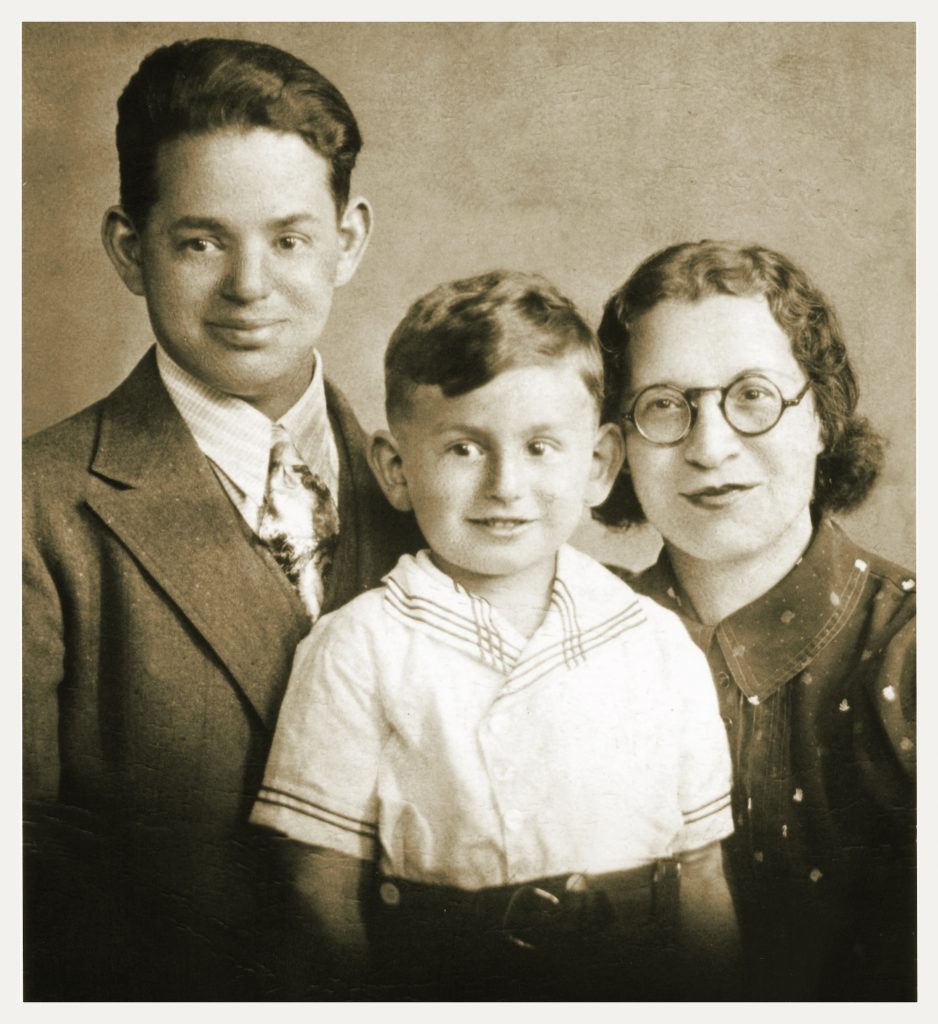 Eli Broad with his parents. Photo courtesy of the Eli and Edythe Broad Foundation.

Born in New York in 1933, Eli and his family moved to Detroit in 1940. He met his wife while completing his studies at Michigan State University, where he graduated in 1954.

A friend suggested they might be a good match, and gave Eli her phone number. Even though she didn’t know who he was, Edythe agreed to go on a date. They were engaged within months. (Eli is survived by Edythe and the couple’s sons, Jeffrey and Gary.) 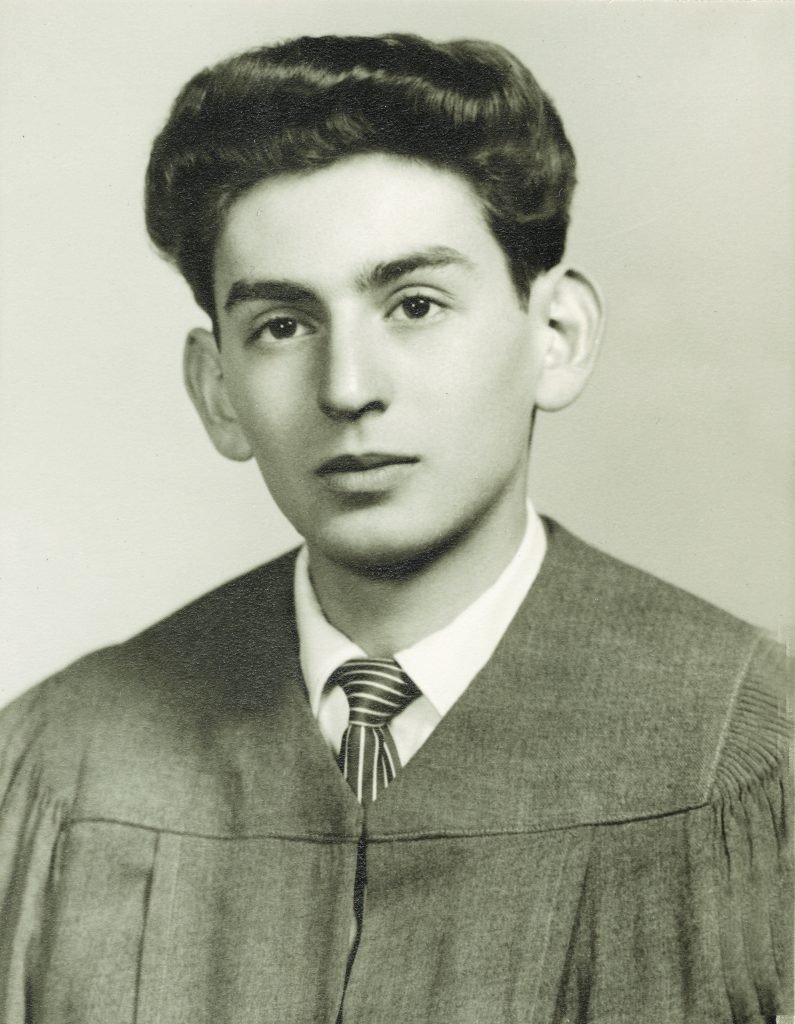 Eli Broad at his graduation. Photo courtesy of the Eli and Edythe Broad Foundation.

The Broads moved to Los Angeles in 1963. At first, it was Edythe who was the art lover, buying works on paper from local galleries such as Ferus and Nicholas Wilder. But Eli soon grew to share her passion.

“Edye was the first collector in our family, and I came along later—later being some 50-odd years ago. She was my inspiration to collect art,” Eli told Haute Living in 2016. “I would go off on business trips, and when I was overseas, she would buy prints. One day, she bought a wonderful poster by Toulouse Lautrec, which I recognized. That got me curious.”

His first purchase was a Vincent van Gogh drawing, and the collection blossomed quickly from there. 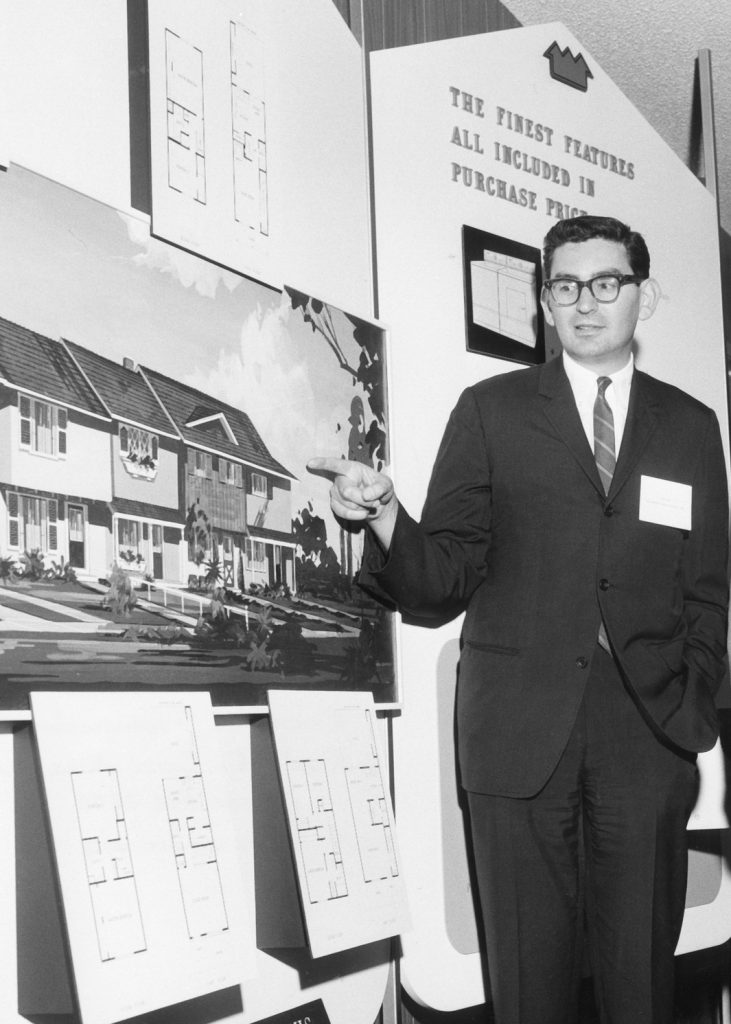 As their holdings grew, the Broads sought to share their collection with the world, founding the Broad Art Foundation in 1984 to arrange loans of their art. In the years since, the foundation has loaned 8,700 works to over 550 museums and galleries worldwide. Eli retired from the foundation in 2016.

Prior to opening their own museum, the Broads were instrumental in the founding of the Museum of Contemporary Art in 1979, donating $1 million to the $13 million initial fundraising campaign. Eli served as its founding chairman, and helped secure the purchase of 80 Abstract Expressionist and Pop works from Italian businessman Giuseppe Panza di Biumo. The acquisition instantly transformed the institution into a world-class destination for 20th century art. 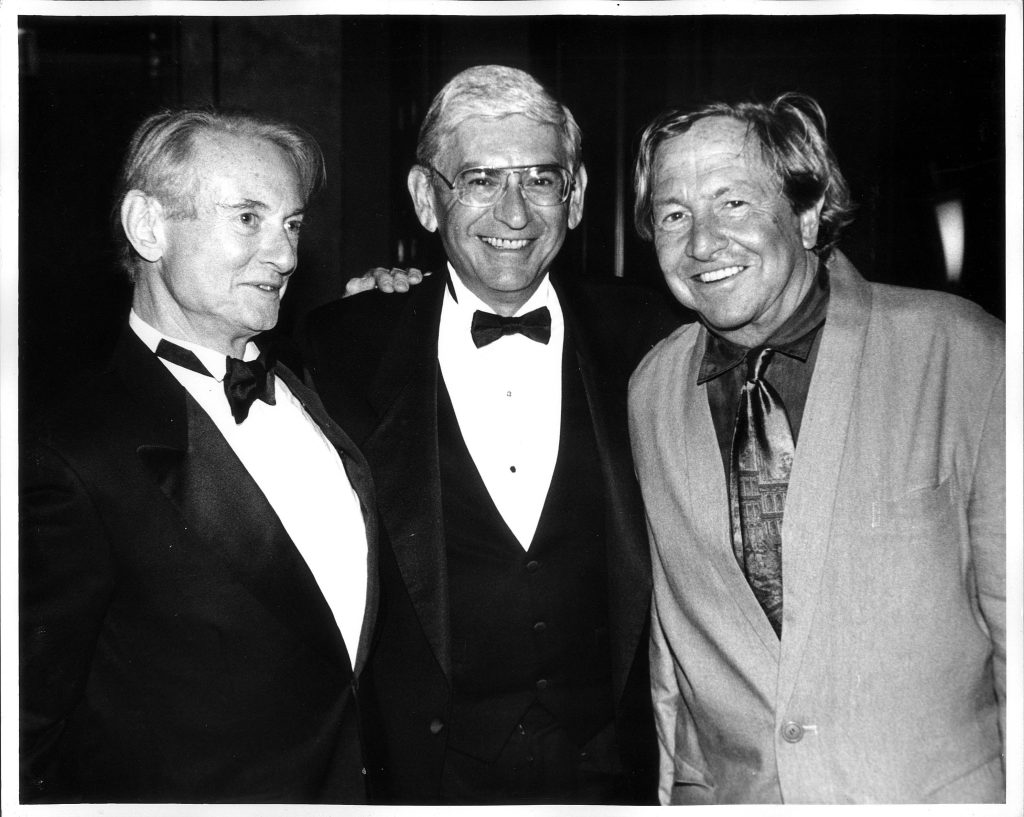 The transaction was a testament to Broad’s hard-driving approach. Once museum leadership had agreed amongst themselves to offer Panza up to $12 million for the collection, Broad closed the deal within 24 hours for $11 million—$1 million less than they had been prepared to spend. Today, the works, which include seven Rothkos, 12 Klines, 11 Rauschenbergs, four Lichtensteins, and eight Rosenquists, are estimated to be worth more than $1 billion.

Broad also figured into the turbulence that shaped MOCA in the years that followed, advocating for the hire of controversial art dealer-turned-director Jeffrey Deitch; pushing for the ouster of chief curator Paul Schimmel; and attempting to broker a (failed) merger with the National Gallery of Art in Washington, D.C., when the museum was facing a formidable budget shortfall.

In 1996, the Broads threw their support behind long-delayed plans to build the Walt Disney Concert Hall in Los Angeles, a $300 million project designed by Frank Gehry that opened in October 2003. Home to the Los Angeles Philharmonic, it has become one of the city’s best-known buildings.

Gehry himself was among the most candid about the experience of working with the exacting Broad, telling 60 Minutes in 2011: “Eli is a control freak.”

All told, the Broads have given nearly $1 billion to Los Angeles-area arts and culture institutions. 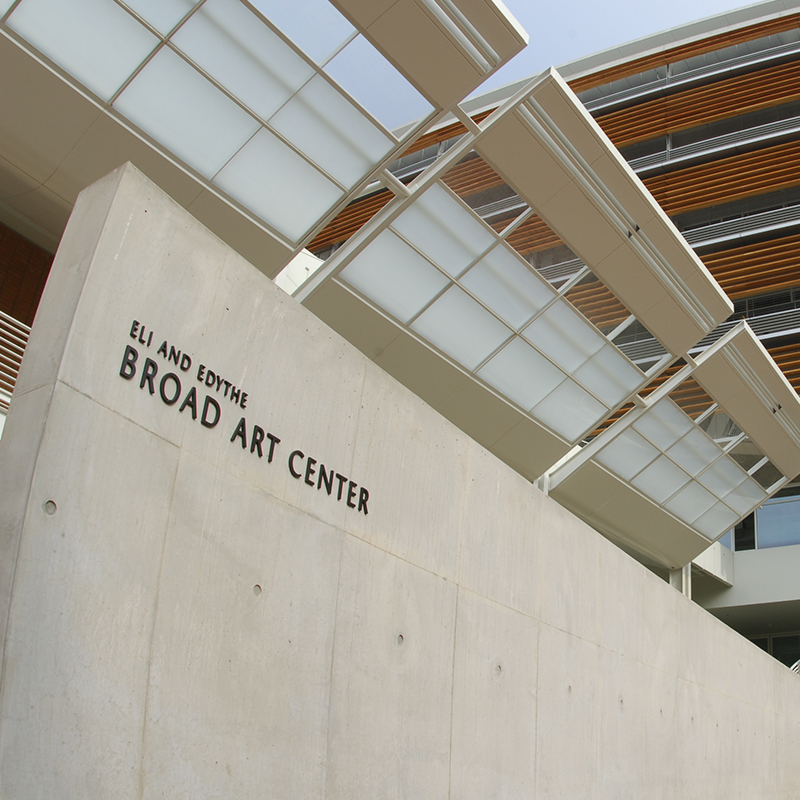 The Eli and Edythe Broad Art Center at the School of the Arts and Architecture at UCLA. Photo courtesy of UCLA.

The couple also gave a $60 million gift to the Los Angeles County Museum of Art (LACMA) in the mid-2000s to fund a new contemporary art building. Broad’s fingerprints were all over the project: he personally recruited architect Renzo Piano and insisted the building bear his name. But he shocked the museum world when he decided at the last minute not to gift his collection to the Broad Contemporary Art Museum when it opened in 2008. Instead, he and Edythe decided to build their own museum.

The opening of the Broad on Grand Avenue—home to both the Broad-funded MOCA across the street and the Disney Concert Hall next door—marked the culmination of the couple’s efforts to transform the street in downtown Los Angeles’s Bunker Hill neighborhood into a thriving cultural corridor.

“It is difficult to overstate Mr. Broad’s importance to Los Angeles,” wrote the New York Times in 2017. “His contributions to the city’s art and cultural world may well prove the most enduring legacy—particularly for Los Angeles’s now-thriving downtown.” 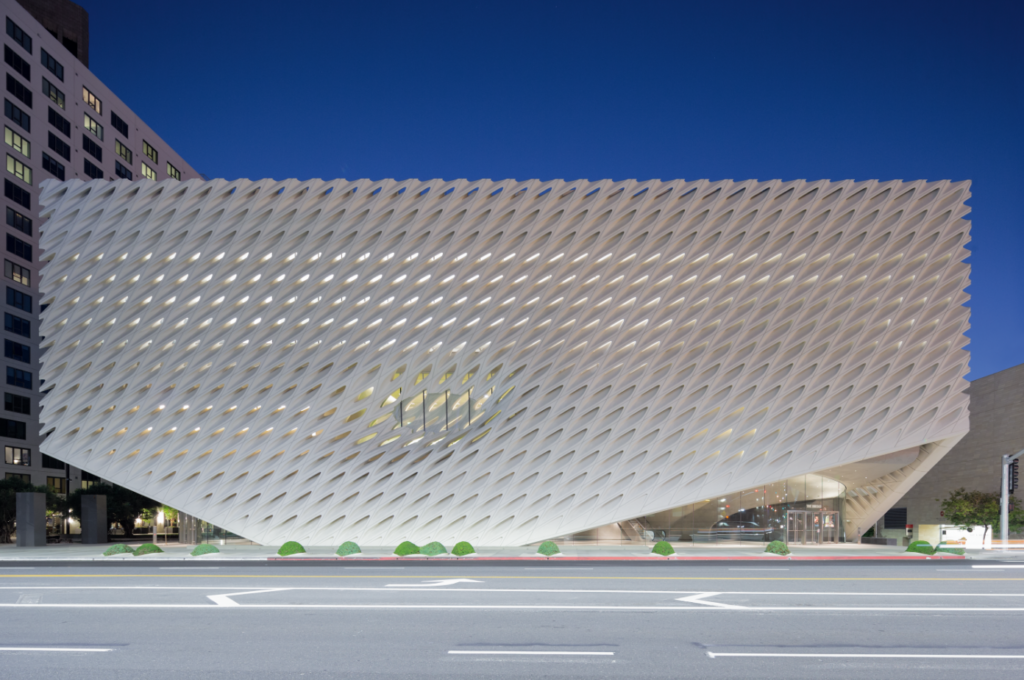 The museum, designed by architect Diller Scofidio + Renfro, became an immediate hit, attracting more than 900,000 in 2019—over three times the projected attendance.

When it first opened in 2015, some criticized its focus on mainstream (often white, often male) market stars. The institution proudly showcased Jeff Koons’s Rabbit, another edition of which sold for $91 million in 2019, becoming the most expensive work to ever sell by a living artist at auction. The Broad also boasts deep holdings of work by artists including Cy Twombly, Takashi Murakami, Cindy Sherman, Christopher Wool, Jasper Johns, and Yayoi Kusama (whose “Infinity Room” drew lines around the block).

Despite mixed reviews, the museum, which offers free admission, managed to attract audiences that other institutions in the city had struggled to engage; 70 percent of its visitors identify as non-white. 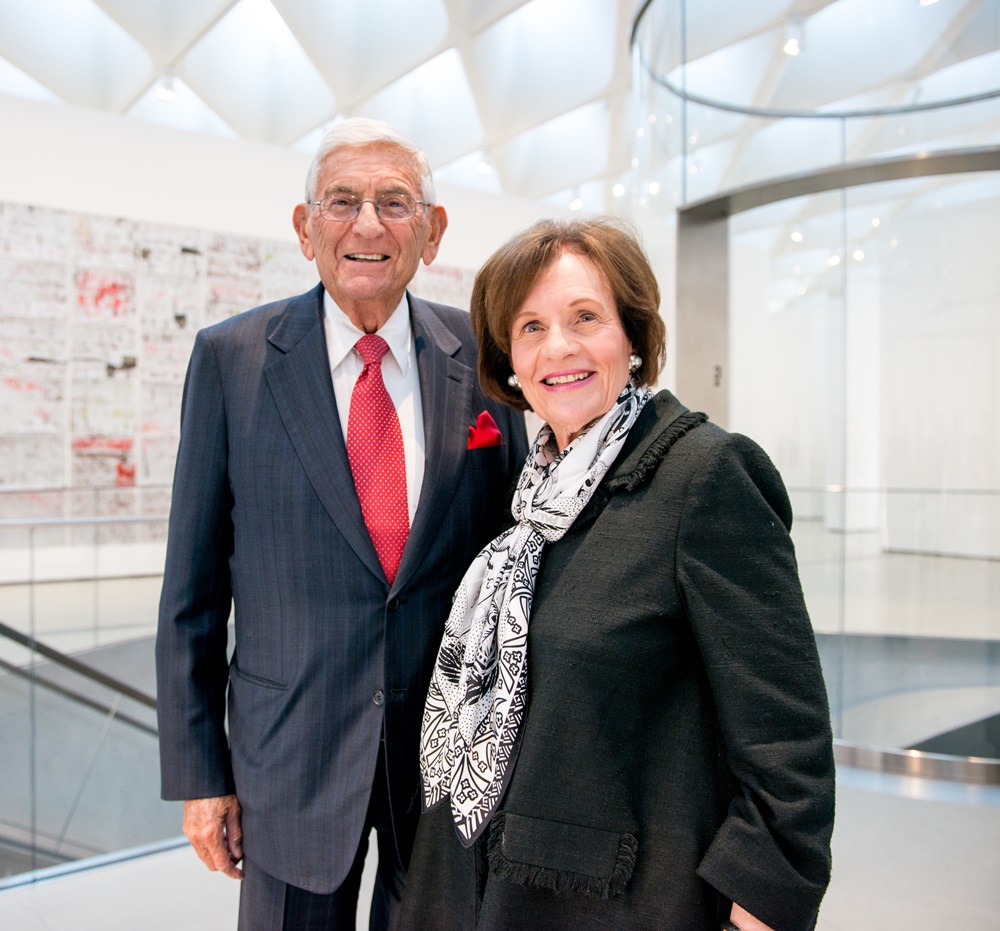 The couple’s impact on Los Angeles culture is felt in other corners, too. They created a $10 million endowment for programming and arts education at the Santa Monica College performing arts center, now home to the Eli and Edythe Broad Stage and the Edye Second Space, and were major contributors to the School of the Arts and Architecture at UCLA, creating the Eli and Edythe Broad Art Center.

A life trustee of MOCA, LACMA, and the Museum of Modern Art, Eli was a fellow of the American Academy of Arts and Sciences. The nation of France presented him with the Chevalier in the National Order of the Legion of Honor in 1994. His other honors included the Carnegie Medal of Philanthropy in 2007 and the David Rockefeller Award from the Museum of Modern Art in 2009.