Just five years out of art school, Amani Lewis has gained a long list of admirers for the artist’s portraits, which use digital imaging, photo manipulation, collage, and textile to create vivid images of the people in their community.

It is not surprising, then, that Lewis is equally skilled at bringing together the work of other artists to create a show that serves as a snapshot of their creative circle of influence.

Lewis, who lives between Baltimore and Miami, brought together the work of 13 artists, including Shaunté Gates, Ambrose Murray, and Khari Turner, for “When Two or More are Gathered,” an exhibition on the art-sales platform LiveArt and on view IRL at Sperone Westwater in New York. The works were consigned directly from the artists, who also set the pricing and will have input into their final sale.

Ahead of an anticipated debut solo show at Salon 94, Lewis checked in with us from their Miami home and studio. 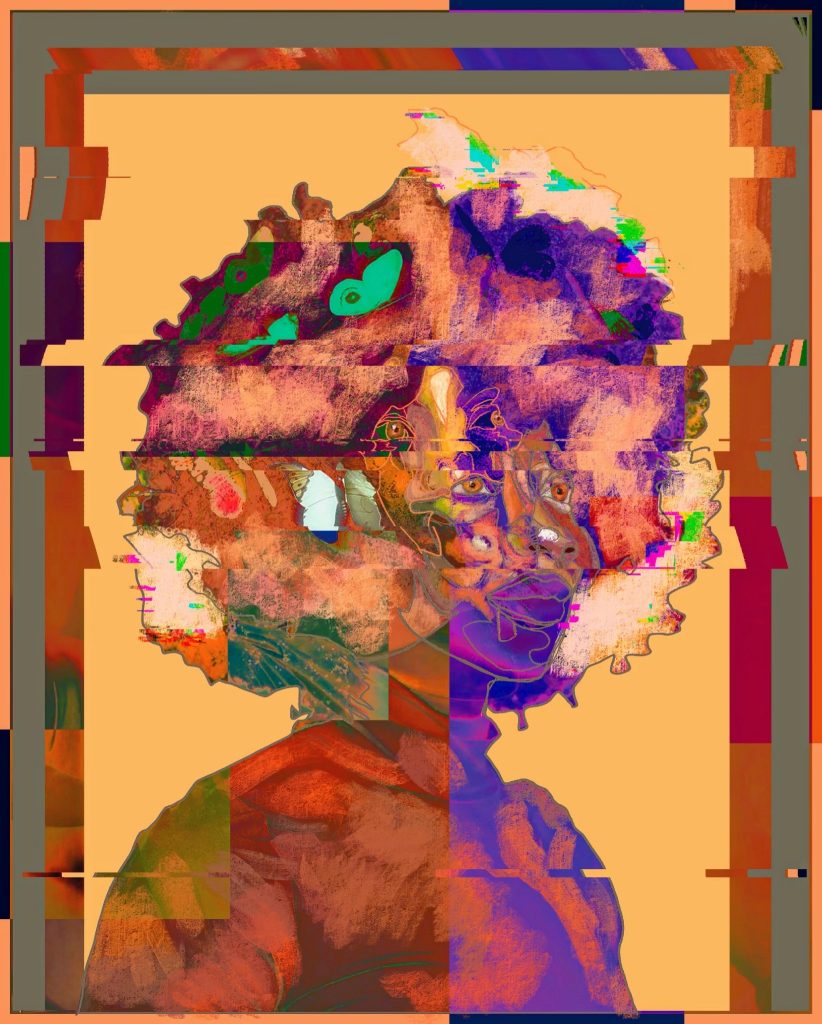 I’ve just curated a show with LiveArt, “When Two or More Are Gathered,” which opened June 29. The show features 13 artists whom I love dearly and whose crafts I greatly respect.

I’m also super excited for a solo show opening with Salon 94 in New York in November. All of the paintings in the exhibition will be of close family members who’ve raised me, or contributed to the person I am today. It’s really a tribute to them—it’s about them, and for them.

Walk us through the when, where, and how of your approach to that project on a regular day.

This exhibition truly started as a collection effort on my part. I wanted work from all of these artists for myself and eventually started engaging with them over Instagram.

Pretty quickly, I realized there was a synergy between all of these artists; many of them were in partnerships together, which was a beautiful thing to see. Knowing that, you can observe where one is influencing and supporting the other in the work. But these observations just prompted more conversations and dialogue about friendship, reciprocity, romance, growth—all good things.

We all rode that wave together to make things happen. It’s been a team effort all the way through—Marisa Kayyem from LiveArt has played a huge role, and all of the artists have heavily participated in the process. 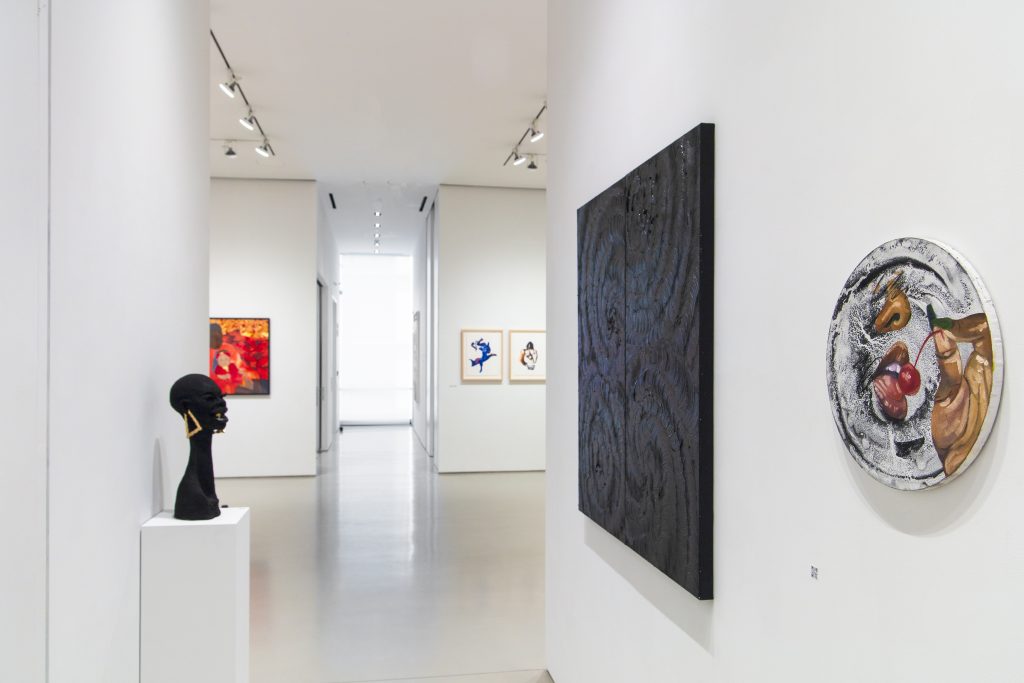 “When Two or More are Gathered,” LiveArt.

My living room in Miami is my favorite part of my house. I have this beautiful balcony that lets in natural light, without any building blocking the view. I get to see the sunset every day, and it’s always different and calming. The living room also happens to be where my PS5 is… so I get to play video games, be with the sun, sit on my luxury couch and just be.

When Iliya Fridman showed me her exhibition, I immediately had a deep connection to this particular work of a woman and her mother. The mother-guardian is sitting in a chair, with her daughter’s body overlaying her own; the two women share space, but there’s a protective element with the daughter being foregrounded, the mother nested in the background.

Godine’s use of the canvas—the way she breaks out of the conventional rectangle and adds an extension, or annex, where the work continues on, stretched—is breathtaking. I was just drawn to the subject matter, and how she handled it. 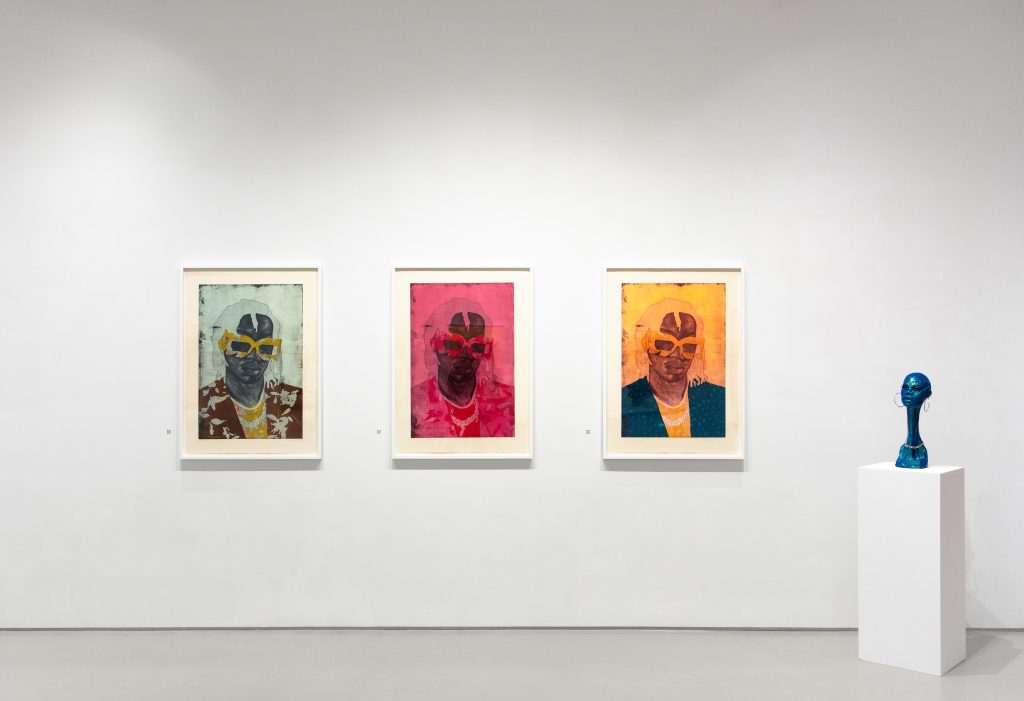 I laugh all day, every day.

Recently the podcast Being Seen asked to include my artwork for the cover of their episode, “The Trans Masculine Experience,” [described as] “an exploration of masculinities through the eyes of trans-masculine people, gender-expansive individuals, and the ones who love us.”

Trans-Masculinity is a cause I care about and live, and being seen on this podcast and in general feels good—it’s something I want for those who want it. There are infinite causes I want to get to and care about, but I’m starting where I am.

Lamb. Lamb’s cooking in the kitchen, properly seasoned with rosemary and thyme. Bathed in butter.

In the art kitchen, the focus is my solo exhibition at Salon 94 in November. I’m solely focused on this tribute to my family, which is a first step in sharing myself more intimately as opposed to sharing other people.

There’s more of me in the pipeline. 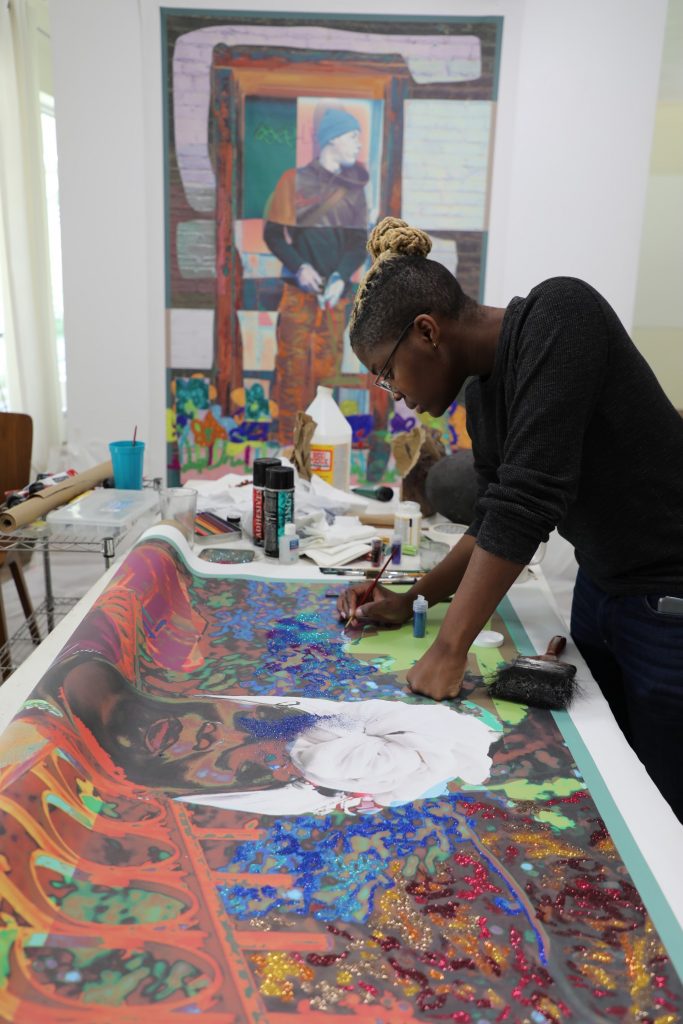 I hope I’d get to be at this dinner. I’d absolutely bring together Charles White and Gordon Parks.

White’s words have stuck with me the most through time. He said—and I may be paraphrasing—”As a Black artist your work has to have the forces of liberation embedded into it. You have to be talking about freedom.” What I appreciate about White’s work is that talking about freedom doesn’t equate critiquing society through harsh images. Rather, it’s depicting what we want freedom to look like for us.

Parks did the same thing, sharing images of black people mining, playing in water bursting out of fire hydrants; he archived an everyday existence, which is important because we need to be represented everywhere, in various contexts.

I’d want to talk to these two artists about how they managed to see this road forward, and thank them for seeing it.