Betty Blayton Taught Art to Hundreds of New York City Kids—Including Basquiat. Now, Her Own Work Is Getting the Blue-Chip Treatment


“This book is dedicated to all the children who have and will attend the Children’s Art Carnival—with the hope that they will become creative, productive, and balanced adults.”

So wrote the late artist and pioneering arts educator Betty Blayton in the dedication of her 1978 handbook on how to introduce children to the arts, a task she understood well after nearly a decade of running the Children’s Art Carnival in Harlem. (A young Jean-Michel Basquiat was one student.)

Blayton came to New York City in the early ’60s and, not long after, moved to a loft on Bond Street in the Lower East Side, reasoning that she needed to be close to where Andy Warhol hung out if she “was going to be the first famous Black artist in America,” as she said in a 2003 interview.

“I had to be where it was happening,” she continued. “But I ended up spending the next 35 years working in Harlem.”

Blayton came to the city looking to be part of something. And then the community she joined ended up looking a lot different than she’d imagined. Nearly a half century later, many of the visual artists in her circle are getting the mainstream attention they never had back then—people like Norman Lewis and Richard Mayhew.

Now, New York’s Mnuchin Gallery is presenting a survey of Blayton’s work, including more than 50 mostly abstract paintings dating from the 1960s to 2015, the year before her death.

The show reflects the holistic, mind-body-and-soul approach she also applied to her work as an education and institution builder—including as the co-founder of the Studio Museum in Harlem. 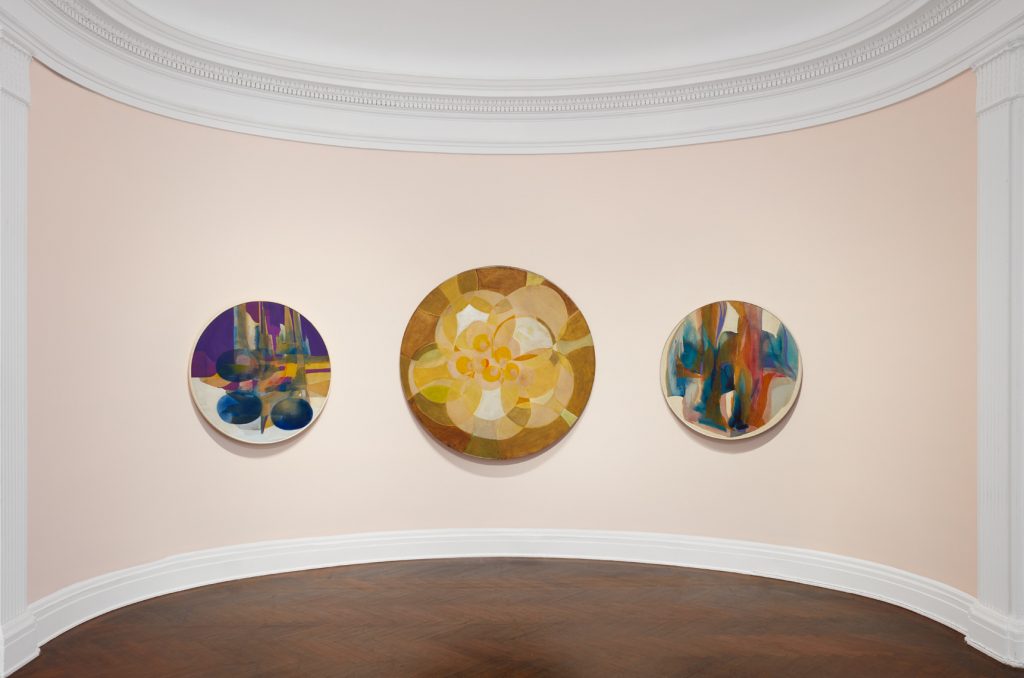 “Comments about her should be about her impact on the world, along with her work,” said the artist Richard Mayhew. “Because her paintings reflect who she is.”

After meeting Blayton in the early ’60s, fellow artist Norma Anderson watched the progression of her work—from her early dabbling in sculpture with their mutual friend Arnold Prince to her later paintings on large, round tondo canvases, many of which are included in the show.

In trying to explain her work to Anderson, Blayton would describe how some pieces were influenced by various spiritual and meditative concepts she’d been exploring. Anderson “never really understood” what Blayton meant, she said, but “it didn’t matter what the ideas were, the paintings really came across beautifully.”

Walking through the show at Mnuchin, any attempt to tie Blayton’s artistic development to a linear timeline quickly falls by the wayside. Probably for that reason, curator Sukanya Rajaratnam grouped the works by style, not date, with earlier pieces positioned as possible influences to more recent ones, proving that some stylistic similarities actually reappear almost 30 or 40 years later. There are suggestions of figuration that ebb and flow throughout, with the mainly circular canvases finding cohesion through Blayton’s expert use of color, structural design, and textural layering. 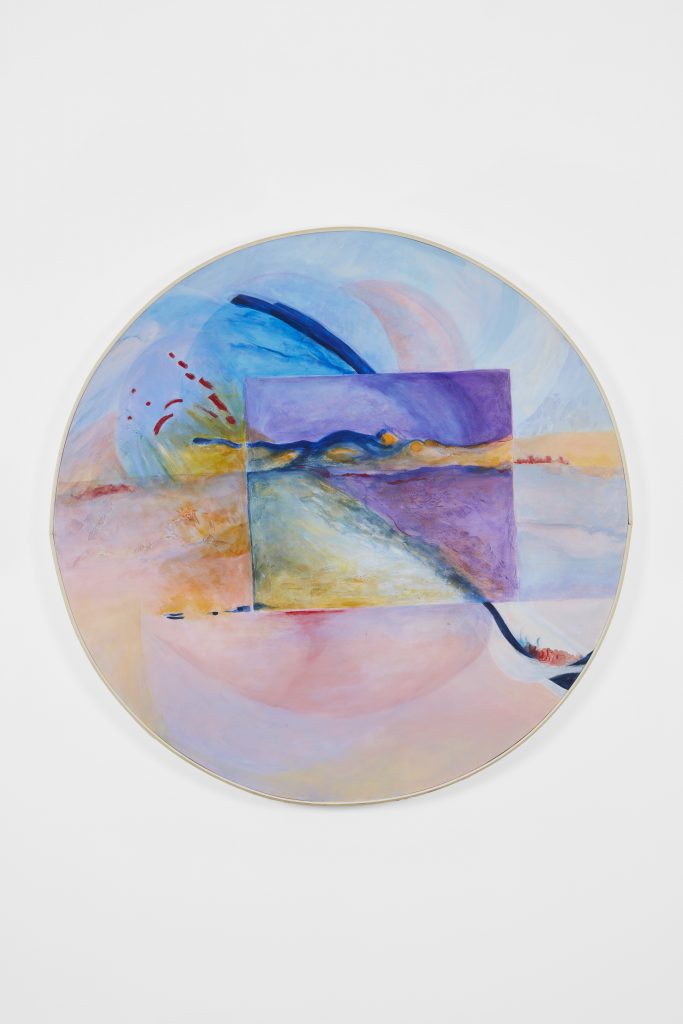 For a long time, Blayton’s art practice was overshadowed by her renown as an educator. When stepping into that role, especially as a woman, people couldn’t see much else.

Blayton’s first big show, at the Elizabeth Dee Gallery in Harlem, only came a year after her death.

Rajaratnam previously organized exhibitions for David Hammons, Sam Gilliam, Alma Thomas, and Mary Lovelace O’Neal at Mnuchin, and got the idea for the Blayton show after “looking at artists who hadn’t made the cut” into the landmark museum exhibition “Soul of a Nation: Art in the Age of Black Power.”

“Betty’s name came up,” Rajaratnam said. “There were quite a few women who were left out of that narrative and were integral to the conversation around this period.”

As much as is the case now, a point of commonality among these artists was
how they operated from a position of disadvantage. For many, including Blayton, they chose to start work as art educators mainly out of necessity.

They were “keeping on and doing what you need to do to be in an environment in which the support systems are so scarce,” said Susan Stedman, an artist and arts administrator who knew Blayton, “with a dearth of professional opportunities among galleries and curators and institutions.”

To make ends meet, Blayton worked as a recreation counselor at the New York City department of welfare, along with Anderson. Their friendship gave them a “feeling like ‘I’m a group of people that knows what it’s all about,” Anderson said.

Artists in the group would offer support for each other’s practices and give advice on where to find work. Using one tip, Blayton got a job at HARYOU-ACT, a government-supported entity providing art education to kids. Anderson and Norman Lewis also worked there, reinforcing the “sense of interconnection that [these artists] shared, socially, and artistically,” Stedman said.

The events of the late ’60s—John F. Kennedy’s assassination, the riots after Martin Luther King’s murder, the Vietnam war—triggered, for many, including Blayton, a reevaluation of  artistic priorities. In the Black community, it crystallized around activism against institutional racism. 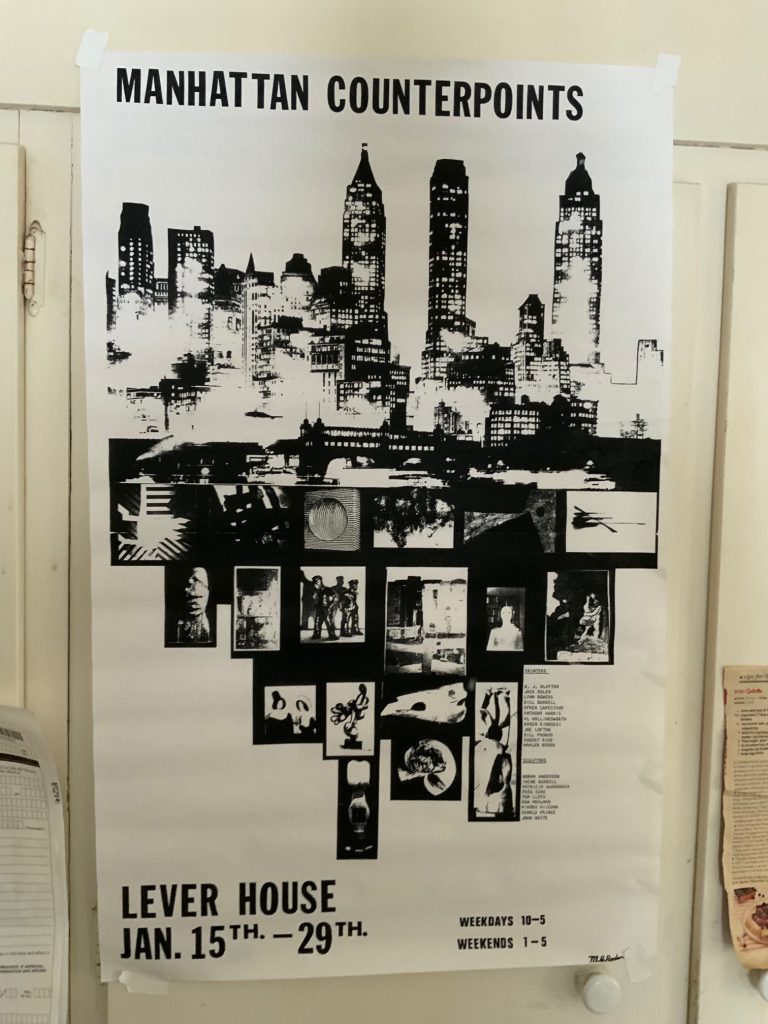 In as early as 1967, Blayton organized “Points/Counterpoints,” a show featuring artists—Black and otherwise—who were “all kind of not in [the mainstream] and were just doing work that was exciting and fun,” said Anderson.

A spinoff of the show, “30 Contemporary Black Artists”—which traveled to numerous mainstream institutions, like the Minneapolis Institute of Art and the High Museum of Art—reestablished its organizational premise around Black artists (including the likes of Faith Ringgold and Norman Lewis). But “Counterpoints” was originally conceived to provide exposure for artists who were underrepresented by mainstream institutions. A lot of those artists also just so happened to be Black.

This is one of many examples of how dominant art institutions have mistranslated messages coming out of the Black arts movement. Yes, social action among this group of artists was always closely tied to race. It was hard not to be when confronted by the degree of institutional and societal racism at the time.

After the Whitney Museum didn’t hire a Black curator to organize the 1971 show “Contemporary Black Artists in America,” Blayton and Richard Mayhew, along with 15 other Black artists, withdrew from the exhibition, participating instead in a show organized in response to it called “Rebuttal to the Whitney Museum Exhibition.” Both Blayton and Mayhew contributed abstract pieces, which a New York Times reviewer claimed disqualified them as Black artists “except by race.” 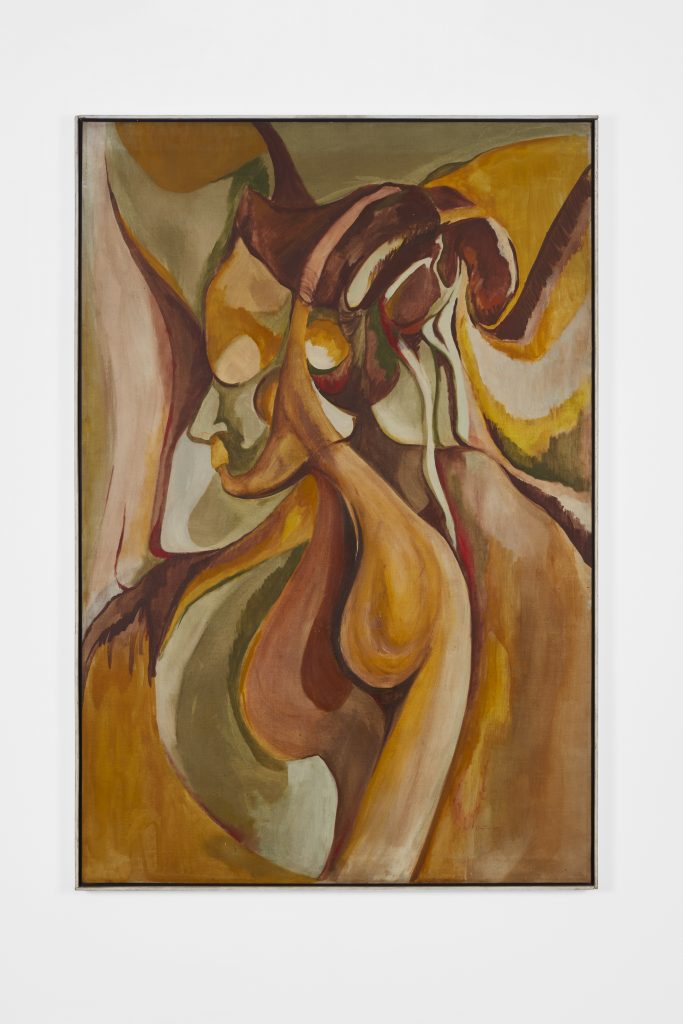 “When Betty was coming up, it was what I call the fraught period of the emergence of Black artists,” said art historian Lowery Stokes Sims. “There were lots of conversations on: Did you do figurative art for the community? If you did abstract art you were accused of selling out to the mainstream. People were having these conversations back and forth.”

While Blayton continued to work on her painting until the day she died, she lost interest in seeking anointment by an art world that has little room for her as Black female artist.

“Betty’s situation was one that was pretty familiar to me in the ‘70s because there were a lot of women who in light of the lack of interest decided to create institutions that would address the needs of their fellow artists,” said Sims, “and create venues for exhibitions and programming for communities who didn’t have the resources or the reach to the mainstream museums.”

Blayton leveraged on a period in which mainstream art institutions—like MoMA, which partially funded the Children’s Art Carnival in Harlem—prioritized this type of outreach; not to bring the community into the museum, necessarily, but to create community outposts in neighborhoods in need of more resources.

In the end, Blayton corrected for the problems she herself faced in trying to find support as a young artist living in New York City. Maybe some disillusionment about the mainstream art world caused her to redefine the type of “famous Black artist” she ultimately wanted to be. Because she definitely became one. Not as she’d first envisioned, but her reputation as an institution builder reverberated through generations of artists, especially for people like Michael K. Williams, who, through working at the Children’s Art Carnival with Blayton, was able to feel “at home” in New York, he said.

Seeing the way she committed to the community was so “singularly gratifying,” he continued. Her influence on the community spanned far beyond her immediate one, helping establish institutions like the Studio Museum in Harlem—which is still, to this day, one of the mainstays of support for Black artists globally—and through other organizations springing up at the time, like Studio in a School, a youth-centered art school sponsored by Agnes Gund. Blayton’s work also lives on, Williams said, through “blueprints that the board of education in New York uses for their art education. Betty’s influence really is very pervasive.”