Banksy’s Print Market Is a Global Juggernaut That Has Tripled in Value Since 2019. Here’s How to Navigate It


Over the past decade, British street artist Banksy has become an unlikely market star. A half-dozen of his works have sold for more than $5 million each at auction, including a $23 million painting at Christie’s in March. Through it all, the artist has refused to work directly with a gallery, show at art fairs, or participate in museum shows.

Beneath these big numbers, an even richer commercial juggernaut for Banksy’s work has developed at warp speed: the market for his prints. In 2011, Banksy’s prints generated a total of $1.7 million at auction. A decade later, that sum has grown a whopping 1,941 percent, to $33.6 million in 2021. And with the year far from over, that’s already almost triple the total two years ago, when his prints made a combined $10.3 million. 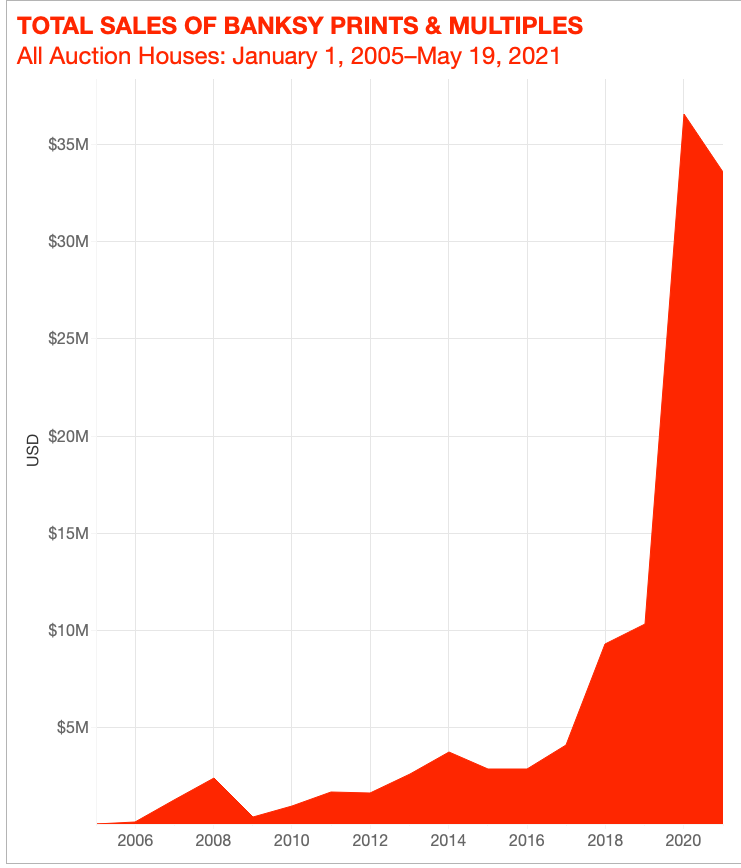 When Banksy was still starting out in London, in-the-know fans would could pick up a print for a few hundred dollars. But what started out as a niche market has become a mammoth business with the backing of major auction houses and prices in the hundreds of thousands, even for unsigned works. (Banksy’s prints were typically produced in sizes ranging from 25 to 1,000; the smaller runs were signed, the larger runs were not.)

It’s no coincidence that Christie’s and Sotheby’s went from handling virtually no Banksy prints to holding two dedicated sales per year each, many of which have been 100 percent sold. Christie’s dedicated sale in March 2021 brought in £4.46 million ($6.3 million), more than double its previous sale in September 2020.

“In the last year alone, signed and unsigned prints by Banksy have doubled in value, if not more,” said Conner Williams, head of prints and multiples at Midnight Publishing Group Auctions.

As an example of the sector’s dramatic appreciation, Williams points to Grannies (2006), a 150-edition print of two elderly women knitting, which a collector purchased on Midnight Publishing Group Auctions for $36,000 in May 2020. Just one year later, other works in the same edition have sold for as much as $149,000.

This trajectory may be why, as dealer London dealer Brian Balfour-Oatts of Archeus/Post-Modern put it, “some of the mega-galleries handle Banksy works quite often, but are very coy about saying so.” 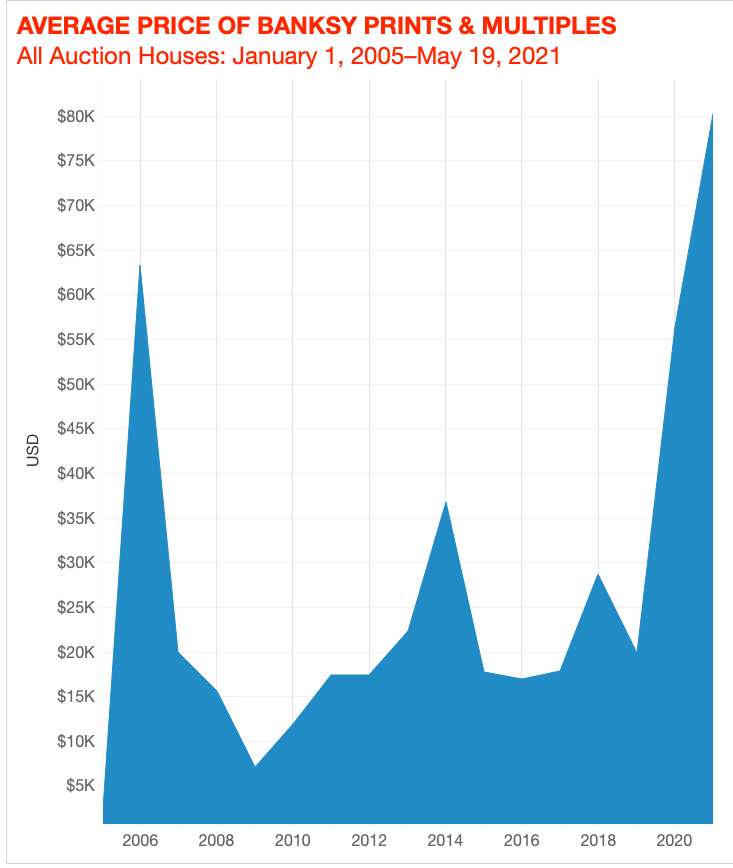 So what is supercharging the market now? Sources attribute the electricity to a mix of speculation, the legitimization conferred by major auction houses, and growing ranks of overseas buyers (particularly in Japan and Korea).

At Sotheby’s most recent Banksy print sale, buyers hailed form from four continents; 50 percent of them were new to the auction house and nearly a third were under 40 years old, according to specialist Yessica Marks.

Like so much else associated with Banksy, his print market operates as something like a universe unto itself. But that doesn’t mean there are not set rules. Interested in buying a Banksy print? Here’s what you need to know about this unconventional corner of the art market.

Banksy released his first commercial prints around 2002 through several print galleries:  Tom Tom (which later became Art Republic) and Pictures on Walls, run by Banksy’s longtime right-hand man Steve Lazarides. (The two parted ways in recent years on terms that experts described as less than cordial; Lazarides did not respond to request for comment.)

At the time, the prints cost around £200 to £300 (the same ones today might run you 1,000 times that). “If you weren’t sure about something, you could ask Steve Lazarides and that was fine,” recalled Balfour-Oatts.

Fans would line up at Art Republic in Brighton on the day of a new edition release. “It was a whole thing,” Balfour-Oatts said. “Some dealers would pay 50 students £50 each to be in the queue with a bonus if they got something.”

London dealer Acoris Andipa, owner of Andipa Gallery, recalled accepting prints directly from collectors who bought work from exhibition pop-ups like “Santa’s Ghetto,” a show organized by Lazarides (with Banksy’s blessing) in an abandoned store off Carnaby Street in London. They rarely came with a certificate of authenticity and sometimes even lacked a receipt.

This freewheeling market started growing more complicated around 2005 and 2006 when prices for the prints started rising. “Once they started making a few thousand each, it really got quite ridiculous,” Balfour-Oatts said. “At one point, every second one that you saw was a copy.” (More on the fakes issue later.) 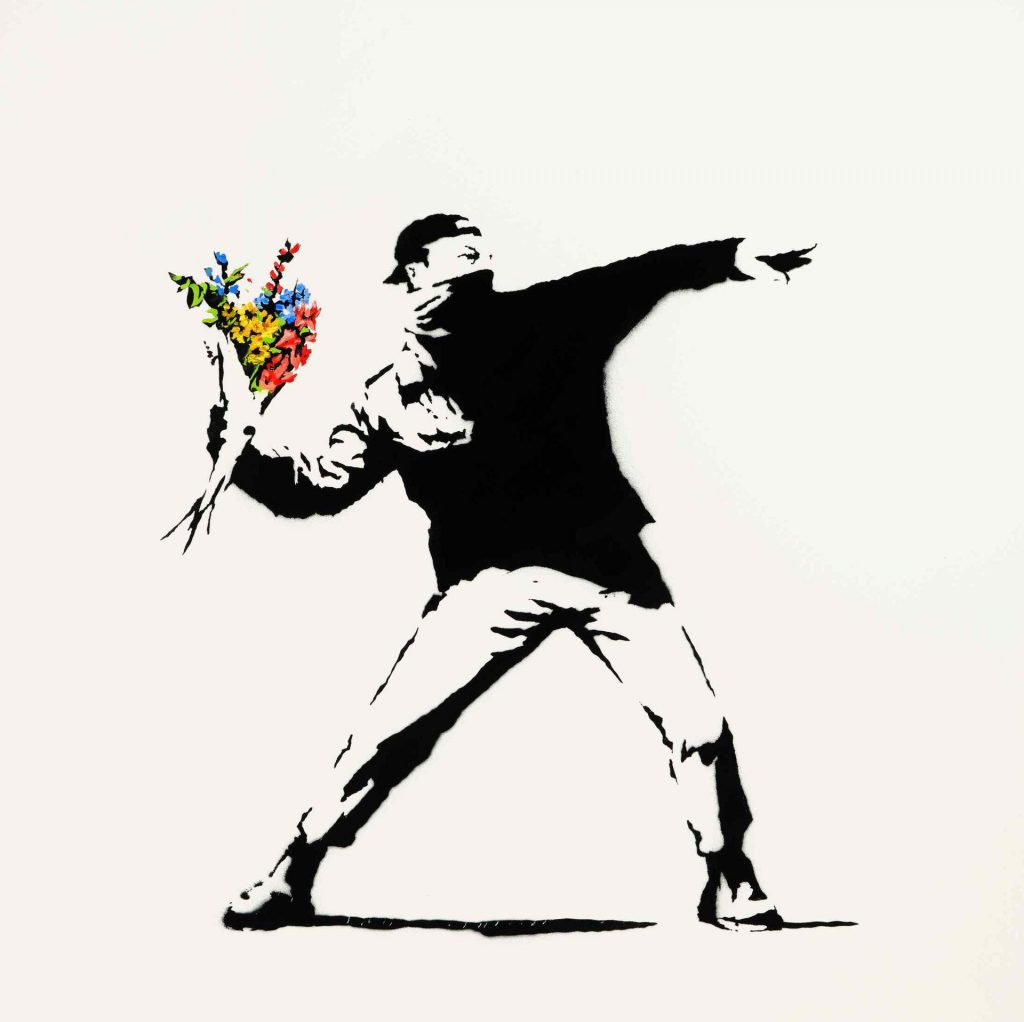 What You Need to Buy and Sell

The secondary market for Banksy prints exploded in 2007, when the total amount sold at auction hit $1.3 million (up from just $126,667 the year before). It is no coincidence that the following year, in 2008, Banksy launched Pest Control to authenticate his artworks and prevent fakes from circulating on the market.

Although Pest Control has periodically offered random lotteries for prints since 2008, it has not held one recently. That means these days, if you want to buy a Banksy print, you have to get it on the secondary market.

“There are a couple of characters online who will make an offer for any Banksy, but there are so many day-trader participants in the market that are prepared to trade a £100,000 print for a £2,000 margin that it’s almost impossible to compete or find a bargain,” Balfour-Oatts said.

Sounds simple enough, right? Not quite. While certificates can provide assurance to buyers, Pest Control is facing a major backlog of requests—and has been known to intentionally slow the release of COAs for recent editions to prevent flipping.

That means that some Banksy collectors, and even smaller auction houses, have begun to trade prints with the promise of a COA to follow—a move that would be unheard of in most other art-market contexts. In such cases, other proof might be provided, such as email evidence of a transaction. But major auction houses like Christie’s and other serious players say they will only offer a work for sale if it has already been authenticated by Pest Control. 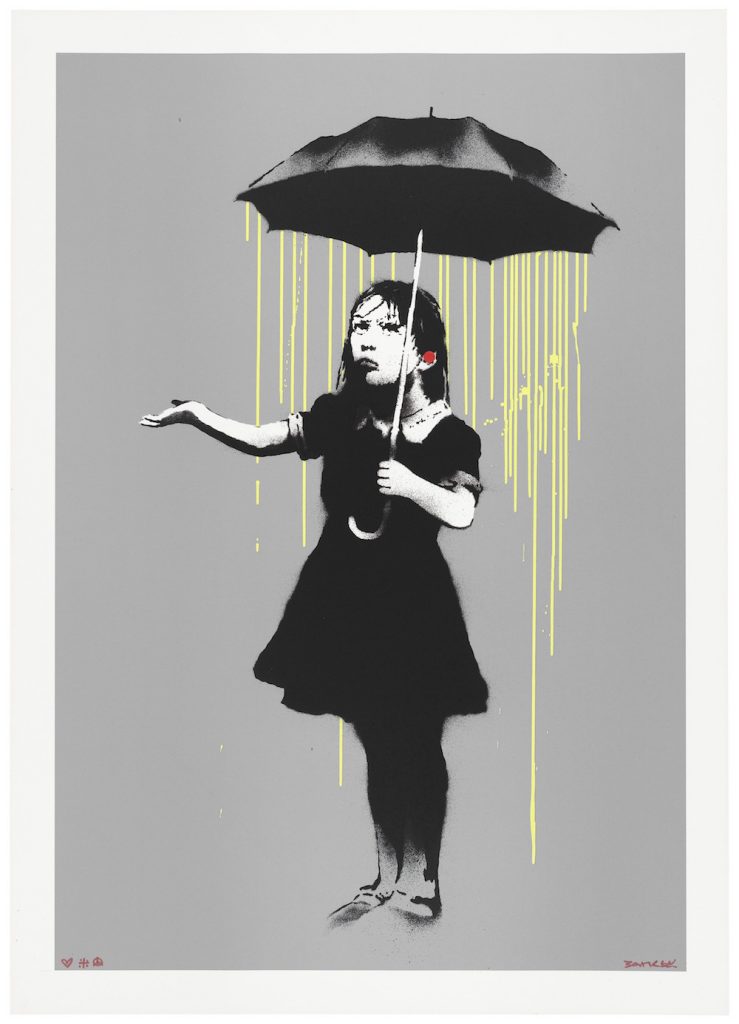 How to Spot a Fake

Both Pest Control—which did not respond to repeated requests for comment on this story—and dealers have admitted that fakes are a big problem.

According to guidance on the Pest Control website: “There are a lot of people trying to sell fake Banksy’s who go to great lengths to make them seem real. If it seems too good to be true—it probably is.”

Even a certificate of authenticity doesn’t necessarily resolve all doubt, because an unscrupulous seller could make a copy or otherwise manipulate the certificate. That’s why dealers are careful to check the quality of the paper, the signatures, and the design, which comes with a ripped Di-Faced Tenner, Banksy’s fake £10 bill with Princess Diana’s face on it. “The other half is kept at Pest Control and is easy for them to verify,” noted Balfour-Oatts.

Pest Control recently released a new COA design with even more security features and has begun to provide a service that allows people to submit existing COAs for approval to provide additional assurance to buyers and sellers. “Checking with Pest Control is not an instant process, but it’s quicker than applying for a new certificate,” Balfour-Oatts said. 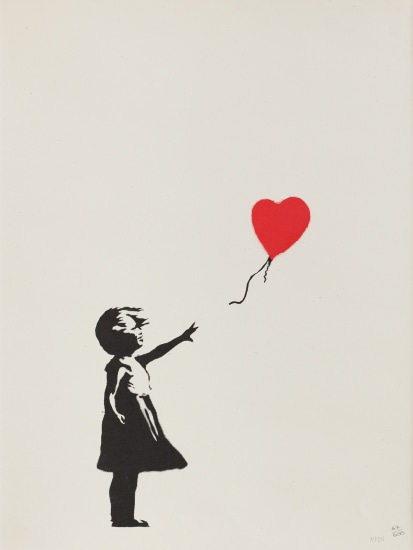 What makes a desirable Banksy print? In some ways, the qualities are not so different from any other print: good condition, a clear signature and certificate of authenticity, and rare or desirable subject matter.

“Because these prints were initially sold for £80 or £100, it’s not unusual for them to have suffered” condition-wise, said dealer Acoris Andipa. He has seen prints with pinholes in the corners, stains, or residue from being hung up with cello tape.

If they are in good condition, rare editions that collectors have been sitting on for decades—stretching back to when they were first released in the early aughts—are particularly sought-after, according to Christie’s prints specialist James Baskerville. “In the last two years market really has exploded,” he added.

One of the most popular print images is Bansky’s famous Girl With Balloon, which was first seen as a public mural on Waterloo Bridge in 2002. (It was produced as a print in 2004 and 2005.) The signed prints were produced in an edition of 150; unsigned proofs, in an edition of 600. An additional 88 artist proofs, produced with balloons in various colors, have consistently been among Banksy’s top-selling prints, making prices as high as $1.6 million. (Unsigned versions can make around $200,000 to $400,000 each.)

For his part, however, Balfour-Oatts advises collectors to stay away from unsigned works, at least for now. A spate of Japanese buyers who may not have distinguished between signed and unsigned works paid big prices for the latter; now, they are on the decline.

All the fanfare—not to mention cold, hard cash—generated by Banksy’s prints may run counter to his anti-establishment ethos. But the artist has done his best to keep things democratic when he can. Back in 2010, Banksy offered a now very popular print, Choose Your Weapon, showing a figure in a hooded sweatshirt walking an outline of a Keith Haring-style dog. Chaos ensued in the line for securing prints, with many aggressive buyers elbowing others who had been waiting for hours.

As a gesture for those left waiting empty-handed at the end, Banksy released a special supplemental run, entitled the “queue jumping” edition. In March, one of them sold at Sotheby’s for £201,600.