The Swiss luxury watch house Audemars Piguet—one of the oldest watch companies in the world, established by Jules Louis Audemars and Edward Auguste Piguet in 1875—has for many years run an art program that exists separately from its watchmaking initiative, aiming to support artists from around the world in their endeavors to investigate lived experiences of all kinds.

What drew you to your roles at Audemars Piguet?

Audrey: I joined Audemars Piguet last year after a few years working as a curator in architecture for Villa Noailles in France and also for Galerie Lauren Bernard in Geneva, so I had experience in transdisciplinary arts and supporting artists through the gallery spectrum. Before that, I worked in research, like Denis, at HEAD, a design school in Geneva, where I was able to follow the work of art and design students and try to share critical points of view on subjects that are very important to the cultural moment, which I really enjoyed.

I really liked that AP, you could support artists with carte blanche, and give them opportunities that they might not otherwise have. It’s important for us to be radical, and to have a practice that really respects the core of the research and the diversity of positions that artists represent today.

Denis: I joined in 2018. For a long time, I was a curator at the Contemporary Art Center in Geneva, where I was mostly doing solo exhibitions and producing new artworks. Then for many years, I was doing research and freelance work as an independent curator. Like Audrey, I was really happy to join a program such as AP’s that’s very focused on supporting new production and developing projects with the artists we work with. 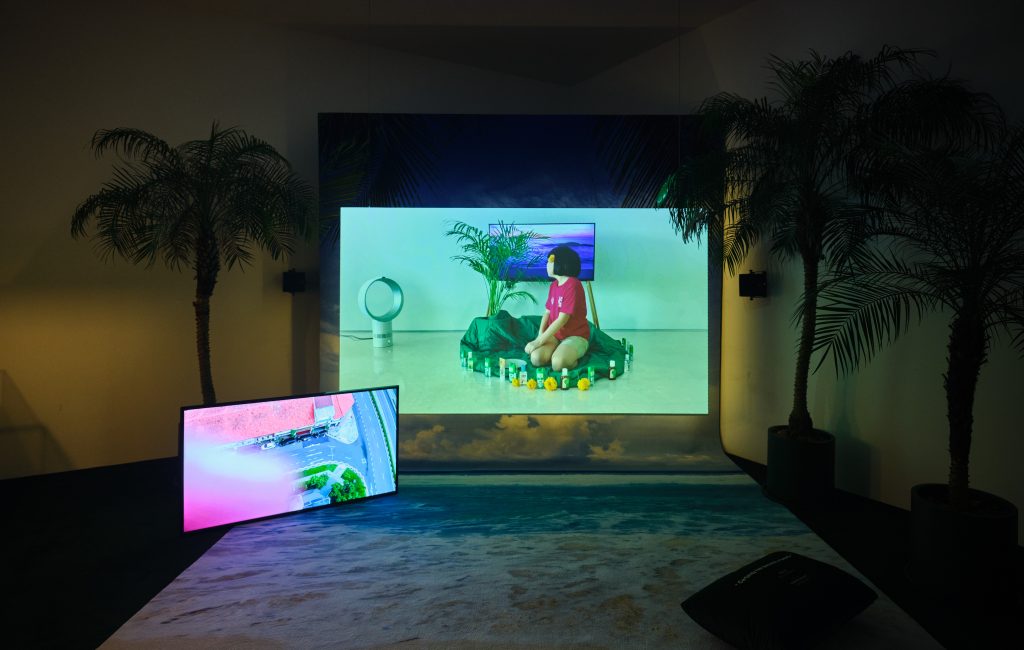 How does the program work?

Denis: What we do is support international artists by commissioning new artworks from them. We let them decide what they want to do—maybe they want to redevelop a project they didn’t get to do yet or reimagine it as something more ambitious or something new. We support diversity in our artist selection—they can be emerging or mid-career or more established if the support makes sense. The artwork belongs to the artist so it’s part of their body of their work and will eventually be exhibited with their other projects and in future shows. We also follow the development of the project from inception to the first presentation and exhibition. We’re very happy to accompany the artist afterwards, too, if they have another opportunity to present the work and need our help.

Audrey: Also, it is important to mention that we are co-curators in house, and it’s not only financial support that we provide, but a curatorial dialogue as well. That’s why we mention the fact that it’s a long-term relationship: it’s important to go beyond the immediate collaboration, to follow the presentation of the artwork, and to support the artist in the continuation of their careers.

What kinds of artworks have you overseen recently and what do you have planned for this year?

Audrey: We have two kinds of programs within the larger program.

The Audemars Piguet Art Commission is one of the programs, a competition that takes place every two years in which we invite a guest curator who is an expert in his or her region to participate. With their guidance, we select an artist. They then produce a large-scale artwork; most of the time, it’s a first attempt at a project of that scale—we tend to support artists who are not yet internationally recognized, and that’s very important to us. We’re working on our fifth commission at the moment, and it’s going to be held in April and May in Hong Kong. We’re working with two Hong Kong-based persons, Ying Kwok—she was the curator of the Hong Kong pavilion at the 2017 Venice Biennale—and the artist she selected, Phoebe Hui. Her practice is research-based, and the project she’s doing for us is called The Moon Is Leaving Us. It’s a great project, a poetic interpretation of the fact that the moon is slowly but surely migrating away from the earth. And our part is to facilitate dialogue around it and help her deepen her research—for example, we helped her to meet with an astronaut and provided a lot of information that was key for her, including data we pulled on the mutable laws of the universe and how they could be best represented visually.

Denis: The other program we have is called Studio Audemars Piguet.

For that one, we go directly to an artist and propose him or her to develop a commissioned artwork, whatever they want to do. We accompany them from the development of the idea to the exhibition. A few years ago, for example, we had a conversation with the Japanese artist Ryoji Ikeda. He had a very ambitious and a little bit crazy idea of doing a trilogy of video works called data-verse. It was going to translate in images all the data that human culture has produced, from the microscopic—for example, the quark on the inside of an atom—to the macroscopic.

We were very happy to help him present the first part of the trilogy, which was shown in the international exhibition of the 2019 Venice Biennale, curated by Ralph Rugoff. We then had the opportunity to present the first and second variations in tandem at the Kunstmuseum Wolfsburg in Germany last November as two immense, synchronised projects. And now in London, at 180 the Strand, the third variation and the complete trilogy is ready to be presented in the same room. It’s not open yet, but we hope it will debut in March or April. 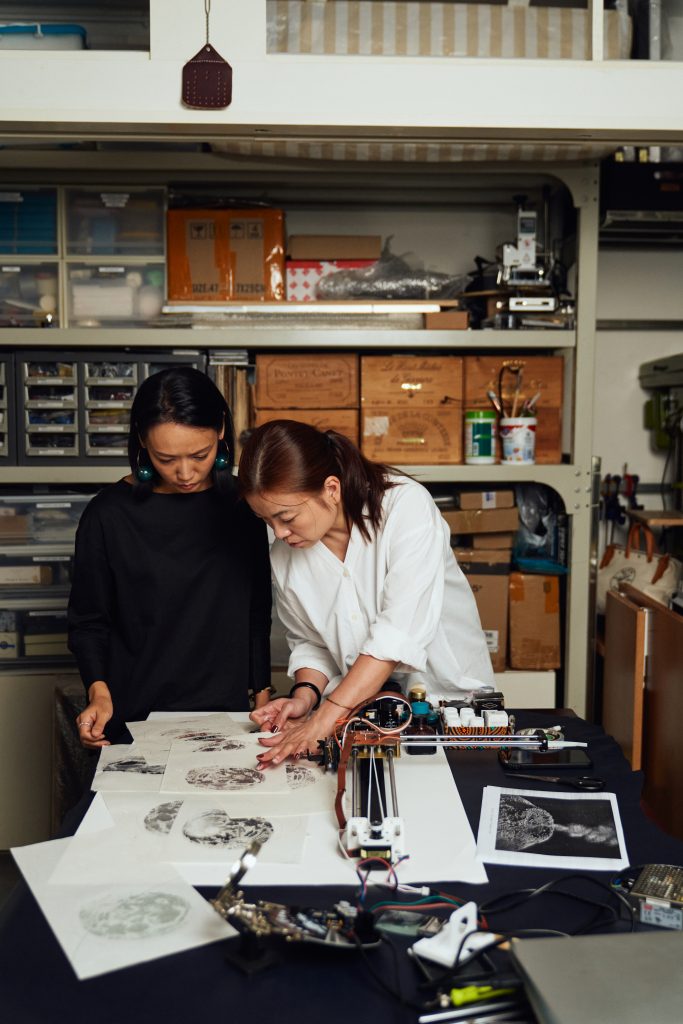 Ying Kwok and Phoebe Hui in the artist’s Hong Kong studio. Images courtesy of the artist and Audemars Piguet.

How do you ultimately decide which artists to work with?

Audrey: Essentially, it’s about the interests of the artists and their practices, their contributions to the contemporary art discourse today and also the diversity of positions they stand for. Engaging with all this is also why we work with invited curators—most of the time they have an interest in specific questions that are very important to the regions they represent. They are very involved and sensitive to the evolution of the specific art scenes they come from and the artists they’re interested in working with.

Denis: In addition to the independent curators, we consult our colleagues, too. We’re a company that’s present in many countries, which is also why we’re so interested in artwork from a global standpoint. We collaborate with our international colleagues frequently—for instance, we worked with our colleagues in China to do something at the West Bund Art & Design fair last year, where we had the great opportunity to commission a work by Cao Fei. We also try to work with artists who can provide a certain critique or point of view on the world we live in today and how to better understand it and imagine what the future might look like. Topics we return to again and again are technology, science, and cultural identity. We’re also working with the Norwegian artist Jana Winderen whose work covers a number of environmental issues and seeks to raise awareness about the ways in which we treat the planet and its living creatures. Research-based practices are especially interesting and appealing to us.

How do you view the similarities and differences between fine art and horology?

Audrey: Where we see affinities is really in the interest of going beyond a first impression or a first look, which is applicable to both worlds. You know, fine watchmaking has such a degree of refinement that you can really enjoy learning about horology as a kind of science all its own; it’s packed with history, science and stories of craftsmanship. And the same goes for contemporary art. The more you know about it, the more you understand it.

Denis: We’re also always looking for different perspectives in how both practices can bring value to lived experiences in society. We like to introduce that dialogue to both art lovers and watch lovers and engage them in a conversation.

How has engaging with artists and art shaped how you work and how you think about the work you do?

Audrey: It’s an interesting question because we’re never really working alone. It’s a job in which you have to talk a lot since nearly every part of it is collaborative. It has also made me sensitive to the fact that doing this kind of work is about everlasting change and mutability and the evolution of work, from its inception to its realization. It makes you question your own ideas all the time.

Denis: What has always amazed me is how efficient and fast artists can be and how they take constraints and deal with them in very inventive, productive ways. It’s amazing to see how quickly artists imagine solutions, which also leaves a lot of time for the philosophical aspect of the work. I really enjoy the balance between the practicalities of completing and then showing an artwork, and the desire to talk about the subject matter which often focuses on larger life things that we all spend a lot of time thinking about.

Emotional intelligence is something we’ve been talking a lot about in the Midnight Publishing Group offices, considering the divisive times we’re in now. Can art be used to teach empathy and compassion, and perhaps lend us a greater understanding of the world?

Audrey: If you look at emotional intelligence as something that assesses your ability to understand yourself and others, we truly believe that art is one of the greatest ways to engage people in that conversation. How we choose the work we show is very much based on how you experience it, so we choose art based on the strength and range of emotions it procures, from joy to sorrow to hope. We are convinced that these ways of questioning and discussing art can deepen someone’s emotional intelligence.

Denis: We also tend to choose artists that are really interested in these questions themselves and how they apply to issues surrounding social and environmental issues and questions of identity. I think constantly being around artwork in our professional lives has really enhanced our own senses of empathy, too.