Artist L’Merchie Frazier’s impressive and far-reaching oeuvre is grounded in the idea that working through the fact of being a Black American is the best means to rewrite history.

A visual artist, poet, performer, activist, and the director of education at the Museum of African American History in Boston, Frazier, in her many ways of working, hopes to reclaim historical narratives that excluded African Americans.

One particularly captivating aspect of Frazier’s practice is her exploration of quilting. In Madonna and Child: The Embrace (2019), Frazier brings Black figures to life through an expressive composition, stitching narratives to give new voices a chance to be heard. The quilt is part of Frazier’s exhibition, “Freedom Rising: I Am the Story,” currently on view at the Minneapolis Institute of Art.

We worked with Karleen Gardner, the director of the Minneapolis Institute of Art’s Center for Empathy and the Visual Arts, to get a deeper sense of the work’s meaning, history, and its connection to emotional intelligence. 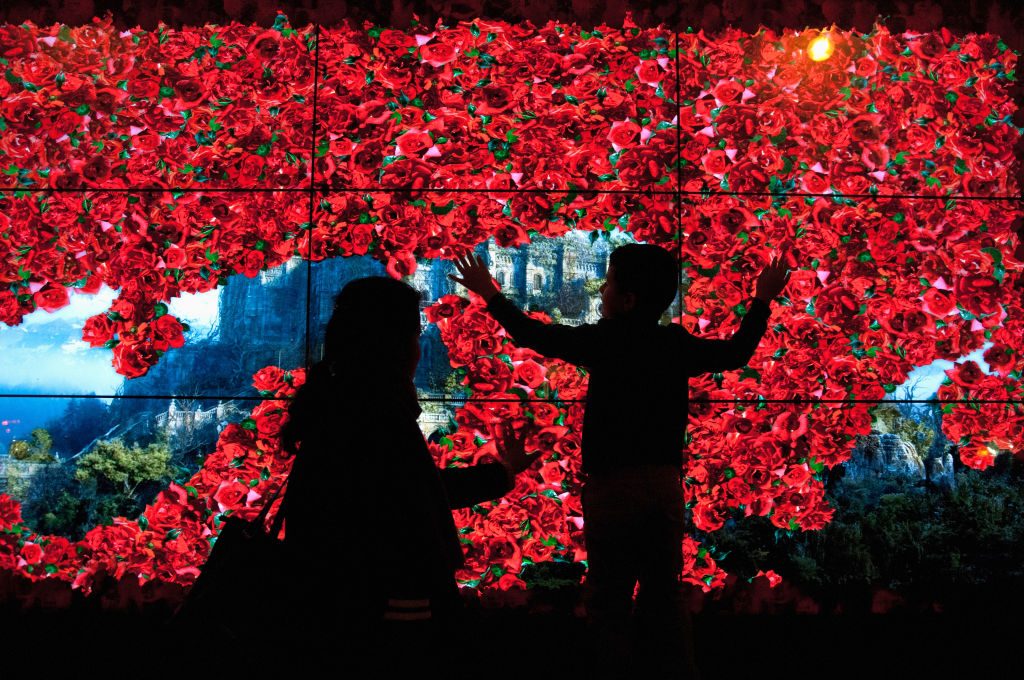 A mother and child in Paris, France. Photo by Kay-Paris Fernandes/WireImage.

Is there anything more intimate than the embrace between a mother and child? The closest connection many of us share is with our mothers, a bond which forms in the womb.

In Madonna and Child: The Embrace, a mother re-establishes her connection to her child by holding his head in a loving cradle while their foreheads and noses touch. Most people can relate to this image on some level, either because they share close bonds with their mothers, or long for one of this nature.

Compositionally, Frazier includes particular elements that impress further emotional connection. The focus on just the two faces, rather than a drawn-out scene, alludes to the privacy of the moment. Viewers should not necessarily be witness to this shared, personal, exchange. The symmetry of the two faces, and the way they seem to seamlessly fit together, personifies the unspoken union.

Further making the characters relatable are the physical adornments Frazier ties in. From the woman’s nail color, jewelry, and hair accessory, to the colorful garments worn by both, we get a real sense that these two are not just symbolic stand-ins, but real, everyday people. 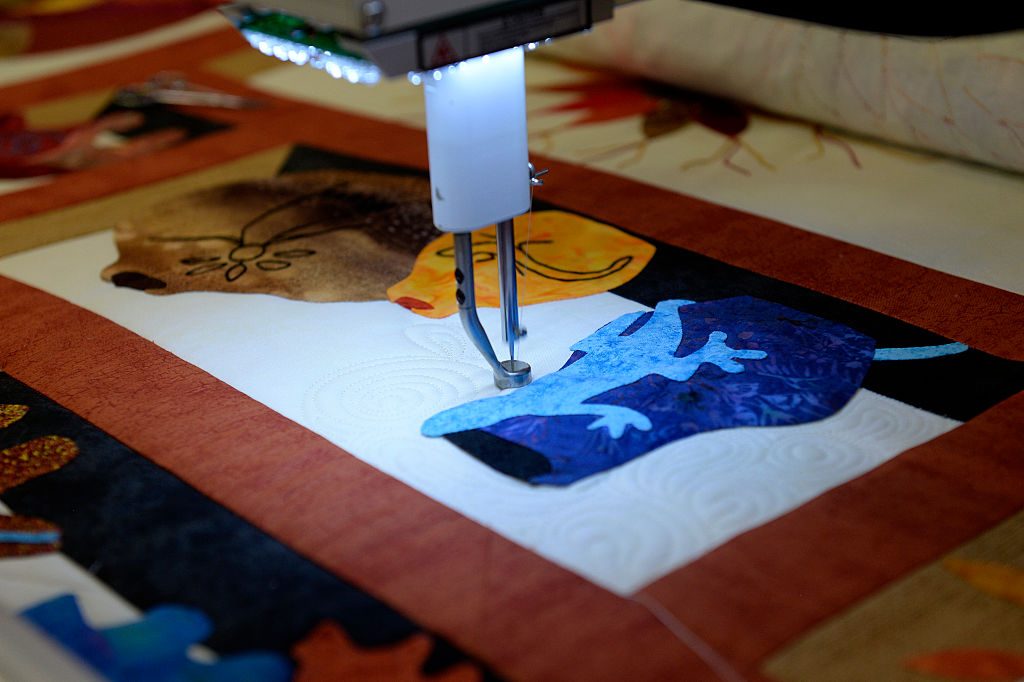 A quilter at work. Photo by Seth McConnell/The Denver Post via Getty Images.

The material Frazier used to create the work adds another layer to its empathetic connection with viewers. Quilts, which suggests warmth, domestic life, and stability, are also intimately tied to African American art-making traditions. Frazier herself learned the technique from her grandfather, who worked as a tailor in West Virginia and would routinely construct quilts out of scrap materials to keep his family warm in the winter. From him, Frazier’s mother inherited the skill and used it as her own creative outlet.

Though the narrative Frazier presents is emotional, the materiality lends itself to a feeling of comfort and protection. Looking at it, you can imagine its feel, and sense the reassurance of security. 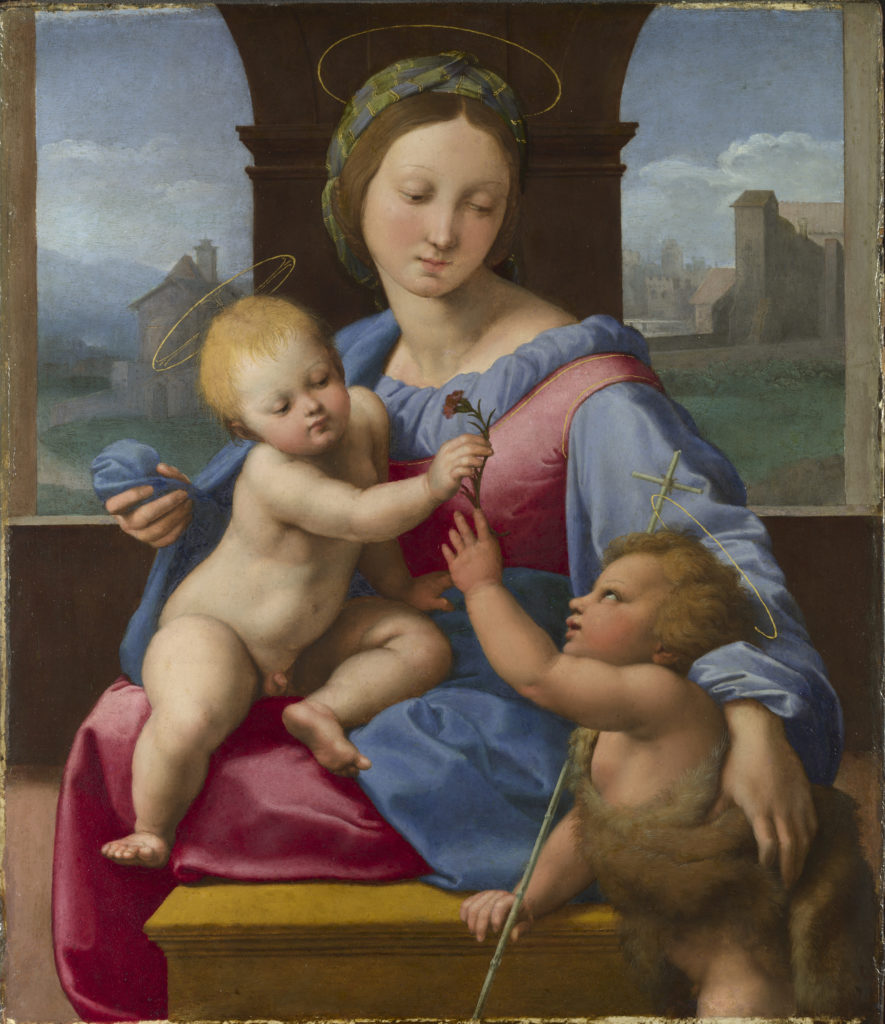 Raphael, The Madonna and Child with the Infant Baptist (The Garvagh Madonna) (ca. 1509-10). © The National Gallery, London.

For centuries, Western artists, including Leonardo da Vinci, Titian, and Raphael, have looked toward the Biblical Madonna and child as muse to create artwork. As a subject matter, it has universal appeal. But Frazier tilts her work in a new way, reinventing the tradition without losing links to historical precedent, all the while still creating something that can be understood by all viewers, regardless of background.

But more importantly, and perhaps more deeply, the work, in depicting a Black mother and child, suggests that the tradition is not simply a White one. It can be reinvented and integrated into a richer, and more diverse, history.