For his first solo exhibition at a New York institution, the 37-year-old American artist Adam Pendleton has taken a big swing in the heart of the Museum of Modern Art (MoMA).

Scaling three sides of the soaring atrium space, modular black 60-foot scaffolds support black-and-white text-based paintings as big as 10 by 20 feet; large-scale drawings; a massive screen for moving images; and speakers projecting a sound collage. Together, they form a single work of art titled Who Is Queen?, which opens on September 18.

The monumental installation explores the artist’s concept of Black Dada, which has underpinned his work for more than a decade. He explores how theories of Blackness relate to abstraction and the avant-garde, and how mass movements such as Occupy Wall Street or Black Lives Matter could influence the form of the exhibition. At the tail end of an eight-week installation, the Brooklyn-based artist took a break to talk about the long gestation of the show and the sum of its parts. 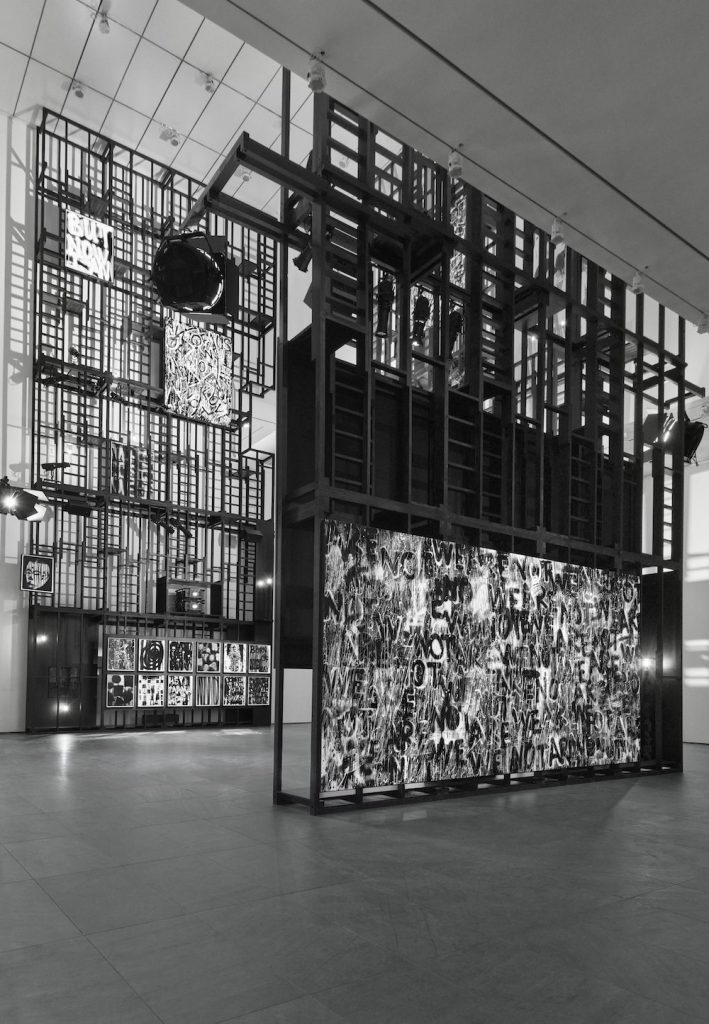 How would you define the essence of Black Dada?

What was the genesis of this exhibition?

I did a residency at MoMA in 2011. It was a little-known secret that when [former MoMA associate director] Kathy Halbreich was at the museum, she invited a handful of artists to interact with the museum however they saw fit. Before meeting with her, I stayed up all night putting these different texts and ideas and artists and writers and thinkers together. I made this reader and handed it to Kathy: this is Black Dada. It was a kind of wild dream. The primary thing that came out of the residency was taking the Black Dada that existed in spiral-bound photo copies, DIY, and turning it into this hardbound book with essays from two MoMA curators and other curators who engaged with my work. Burning in the background was the idea for Who Is Queen?

Why did you choose that name—Who Is Queen?—for the show?

Queen could be a derogatory or loving—depending on who you are—name for a queer man. But specifically in Black culture, it has different connotations. If you’re an effeminate gay man, someone would say, “Oh you’re such a queen.” A long time ago, someone said this to me, and on the one hand I was offended and on the other hand I wanted to embrace it. Then I was repulsed by having to decide between one or the other. There’s something about being a vulnerable being in society. We’re all vulnerable in different ways and at different times. That’s at the heart of Queen, this idea of who we are, what we are, and looking at that in personal but also collective terms. It’s a question I pose to myself but also a question I’m posing to the viewer. 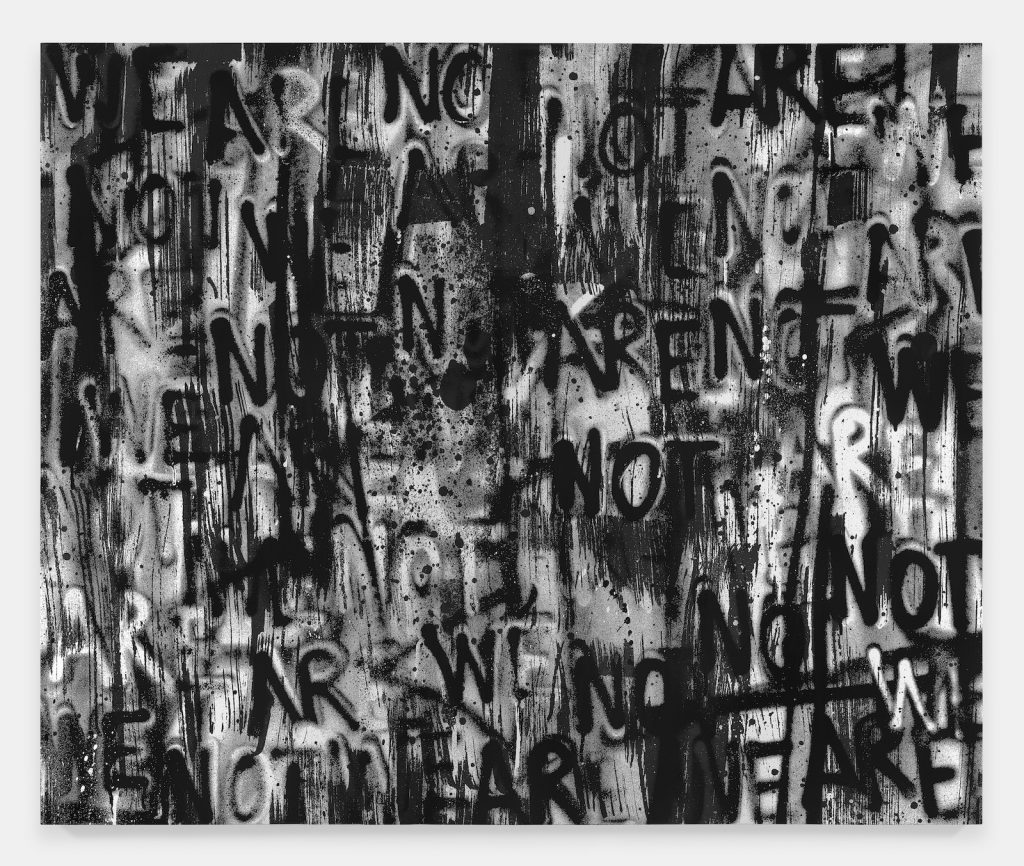 Adam Pendleton, Untitled (WE ARE NOT) (2021). Image courtesy of the artist.

So many of the paintings and drawings here are text-based, including two monumental canvases densely layered with the repeated phrase “We Are Not.” Is it important to you that viewers are able to decipher these or know the source of the text used?

In this instance, I’m referring back to a series of “We Are Not” statements I made in the Black Dada text I wrote in 2008. So not defining yourself by what you are, but by perhaps what you are not. We are not what they say we are. It’s this tension between legibility and illegibility, abstraction and representation, that is embodied in the piece visually but also within the language the painting utilizes.

One of the things I want to do is get people’s attention. I want there to be this moment of recognition where you realize there is language. It’s legible, but layered or abstracted enough to refuse an immediate or easy interpretation. I think sometimes if you immediately read something and understand it, you move on. I’m much more interested in this site of engagement, where you actually stop and think about what you’re reading and what you’re looking at.

Who Is Queen? was originally supposed to open last summer. In terms of content, what kind of an impact has the past year and a half had on the project?

One video is called Notes on Robert E. Lee, about the Robert E. Lee monument in Richmond, Virginia, which is actually my hometown. That monument became a focal point during the summer of protest. It was completely transformed by graffiti. It’s fenced off and I shot it through the fences. That is something that is very responsive. [The stature of Lee was just removed from its pedestal last week.] 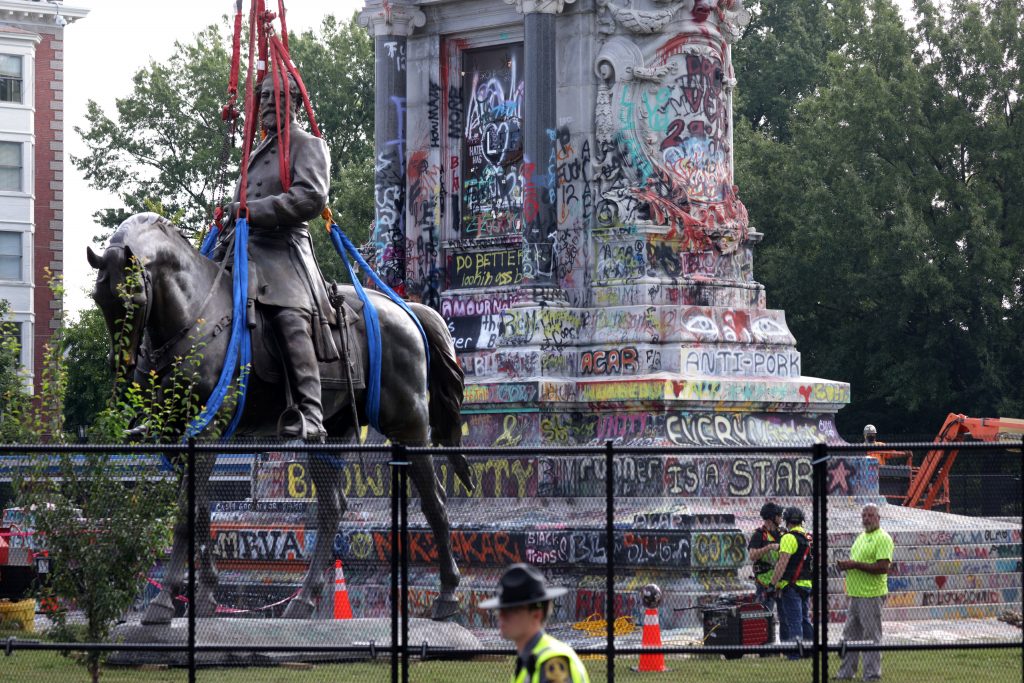 The statue of Robert E. Lee stands on the ground. Photo by Alex Wong/Getty Images.

I just locked the edits on all three of the video pieces that will be shown. There’s also a video portrait of the queer theorist Jack Halberstam and a piece that’s titled Notes on Resurrection City, an ad-hoc city that was resurrected on the National Mall in D.C. in 1968. It was up for six weeks. It’s commonly referred to as the culmination of Martin Luther King, Jr.’s Poor People’s Campaign. It was a site where people from all over the country gathered—Black, white—and demanded economic justice. What really strikes me about Resurrection City was the architecture. They were using very simple two-by-fours to construct these A-frame structures that the people lived in. These structures elevated a humble material and created something unexpected out of ordinary wood. That’s an example of architecture that really influenced Who Is Queen? 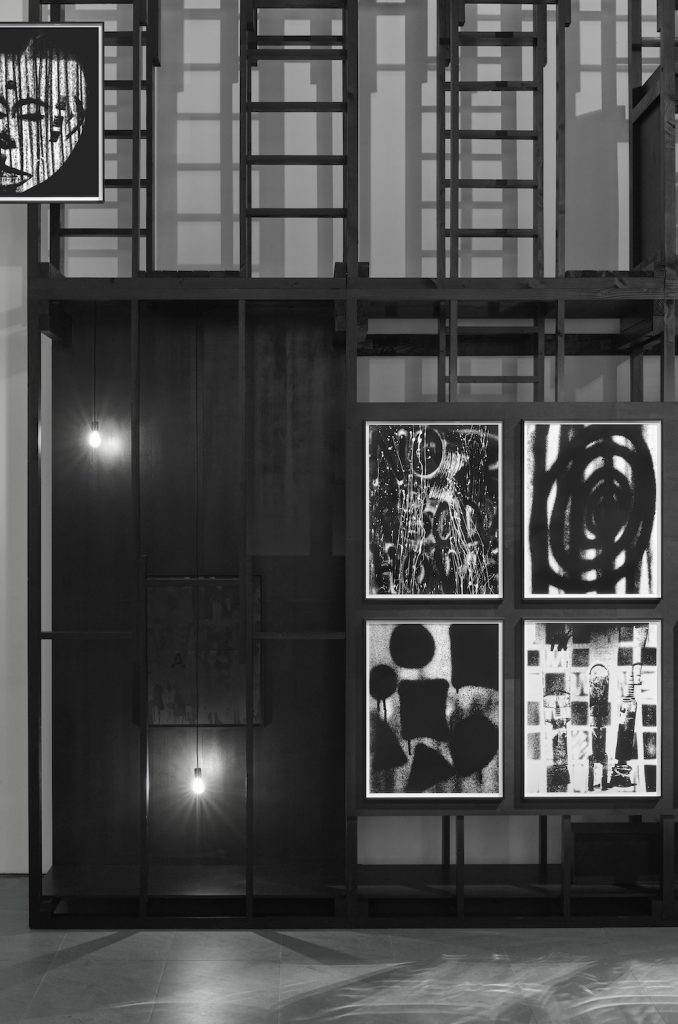 How is sound being integrated into the work?

The three core tracks of the sound collage are a 2014 phone recording of a New York solidarity protest in Manhattan with Black Lives Matter, a 1980 reading that the poet Amiri Baraka delivered at the Walker Art Center, and a 1994 composition by the composer Hahn Rowe called Yellow Smile. These are interwoven with music by Jace Clayton, Julius Eastman, Laura Rivers, Frederic Rzewski, Linda and Sonny Sharrock, and Hildegard Westerkamp.

There’s also a series of podcasts I’m doing with people including Jack Halberstam, Lynne Tillman, Tyshawn Sorey, Alexis Pauline Gumbs—writers, philosophers, poets, musicians. They will be in conversation with each other. I’m operating as a kind of moderator. The audio [from the podcasts] will fold back into the sound collage. The exhibition is almost like a feedback loop. It’s generative. It’s basically an algorithm that does not allow for the same thing to repeat, even if it is using the same elements. Very much like life. No day is the same. 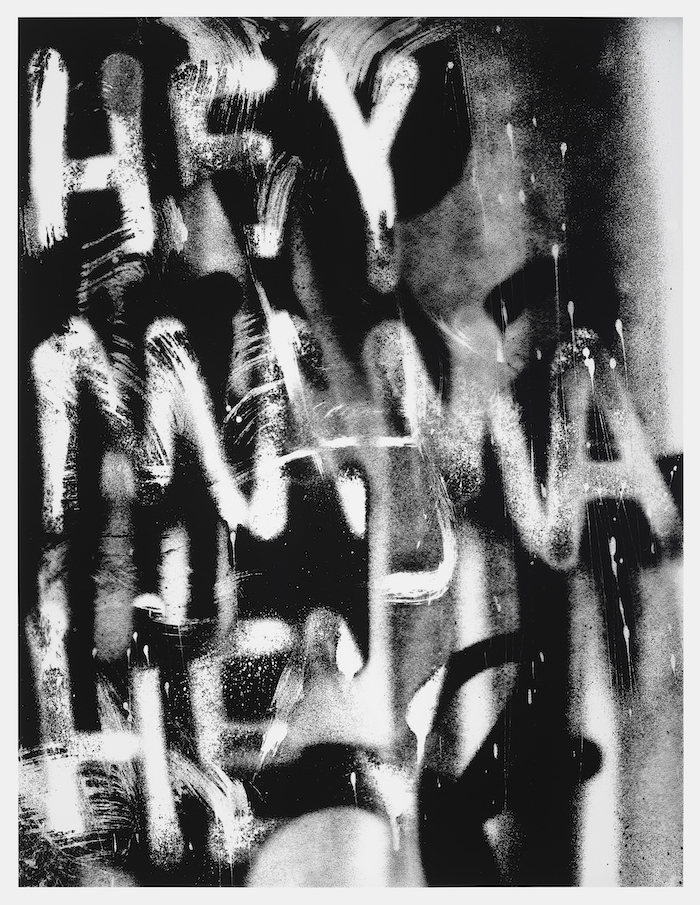 I can’t think of another artist who has taken over this atrium so completely.

I don’t think they’ve ever had a piece that’s used the entire height of the atrium and transformed it into a space for painting, for drawing, for sound collage, for moving image. The piece becomes a different thing depending on where you are in the museum—on the third floor, fourth floor, fifth floor, sixth floor. You can look down and see it. It really plays with the experience and the architecture of the museum on multiple levels. I really think of Queen as a kind of beautiful machine. It’s an insertion of Black Dada into an institutional space—conceptually, theoretically, and just physically. 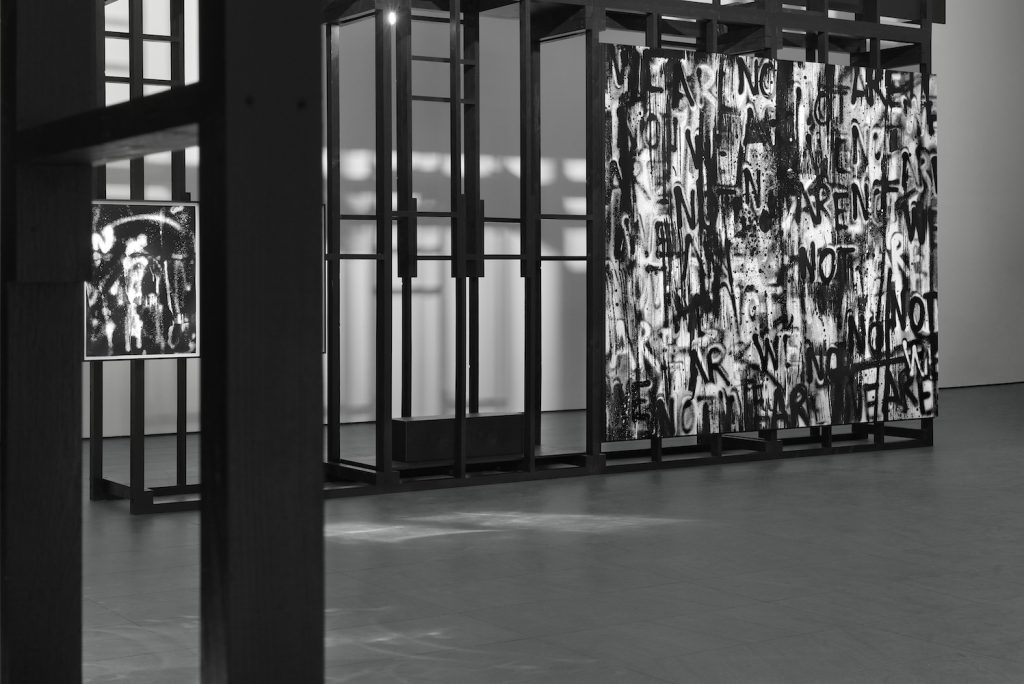 In the wake of the last year, when institutions have been held accountable on racism and equity in a new way, which kind of critique or disruption would you hope Queen delivers?

I hope that one of the things that Queen does is productively overwhelm the institution. Outside of just thinking about this institution, I hope as a concept, as an idea, as a form, it disrupts and reconfigures institutional spaces. I hope it breaks down the things we think are known.