Art Dubai, the First Major In-Person Art Fair Since the Pandemic, Proves That Collectors Are Ready to Show Up and Spend


At any other time, visitors to the annual Art Dubai fair might have mistaken the sleekly curved, glossy white hand sanitizers that lined the halls for an art installation. Interspersed between gallery stations at the 14th edition of Art Dubai, they are a potent symbol of our new reality—and of what it takes to stage an art fair in 2021.

The fair was the first major international art event to cancel last March amid the onset of the pandemic and is now the first to resume in-person operations. It might be one of the only fairs this year to be staged at all.

In many ways, this year’s Art Dubai, which runs through April 3, signals the resurgence of the Gulf megapolis. Prior to the pandemic, the emirate had entered into a grave recession. The spectacular collapse of crude oil prices caused finance ministers across the Gulf to dramatically cut spending; the real estate market had slumped, symbolized by the many glistening sky rises with only a few windows illuminated; and expats had been returning to their home countries by the thousands. Then, the pandemic dealt Dubai another crippling blow. The very strengths that allowed it to shine—hospitality and tourism—also made it particularly vulnerable. 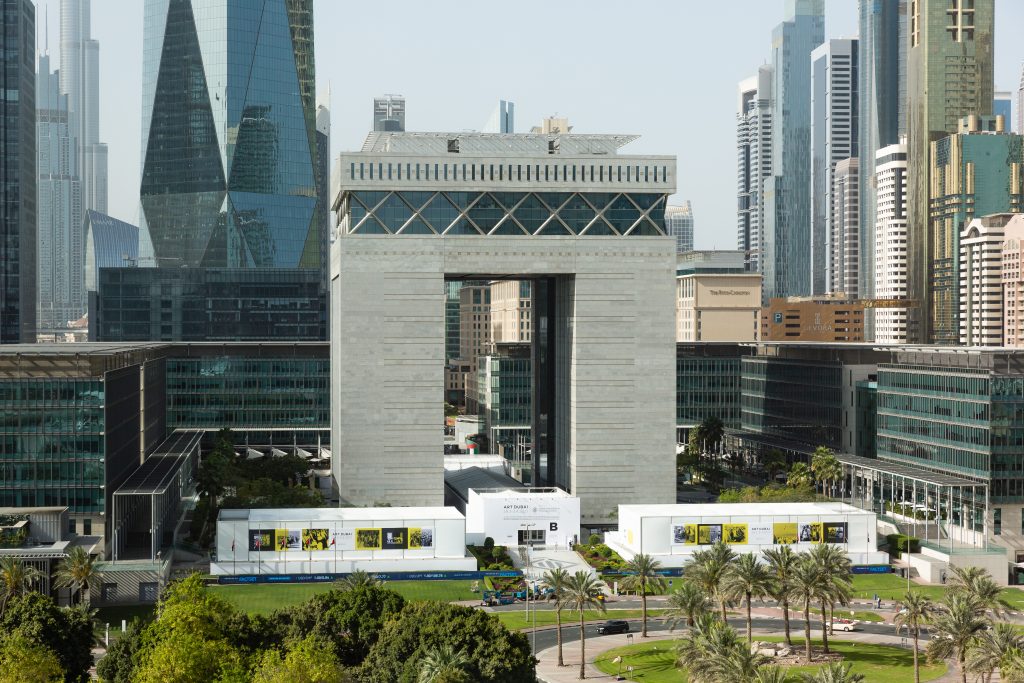 But Dubai has a habit of defying even its biggest skeptics. This time, it has done so royally. As the rest of the world continues to struggle with vaccine rollouts, the UAE has already vaccinated more than half its population, a rate second only to Israel. Its borders remain open and residents and visitors are allowed to live “normal” lives so long as they abide by state-instituted health protocols, social-distancing measures, and obligatory mask-wearing.

At Art Dubai, expressions of joy and relief could be felt beneath masks as fairgoers—many attending their first big social gathering of the year—gathered inside three white-tented halls nestled between the iconic Gate Building and towering sky rises of the Dubai International Financial Center. The central location calls the fair back to its origins: It was in this very spot that Art Dubai launched in 2007 as the Gulf Art Fair before moving to its previous base in Madinat Jumeirah’s Joharah Ballroom.

Aware that this year would be far from typical, fair organizers adopted an unprecedented profit-sharing model. Galleries did not need to pay a fee up front to participate. Instead, they paid Art Dubai 50 percent of sales made during the fair, up to the cost of the booth. Dealers that had put forward the traditional 50 percent advance for the cancelled 2020 fair had the option to apply the fee to this year’s event or to the 2022 edition.

Art Dubai also instituted a remote participation program for galleries that were unable to attend in person due to travel restrictions. Seven dealers, including Kolkata’s Experimenter gallery and Beirut’s Sfeir-Semler, oversaw their installations via Zoom. The fair hired a representative to man their stands and QR codes enabled collectors to Whatsapp the far-flung gallerists directly.

Strong sales offered “a good sign for Dubai as well as a positive omen for some of the bigger fairs globally,” said Iranian-born collector and financier Mohammed Afkhami. “This is the way forward in a post-pandemic future.” 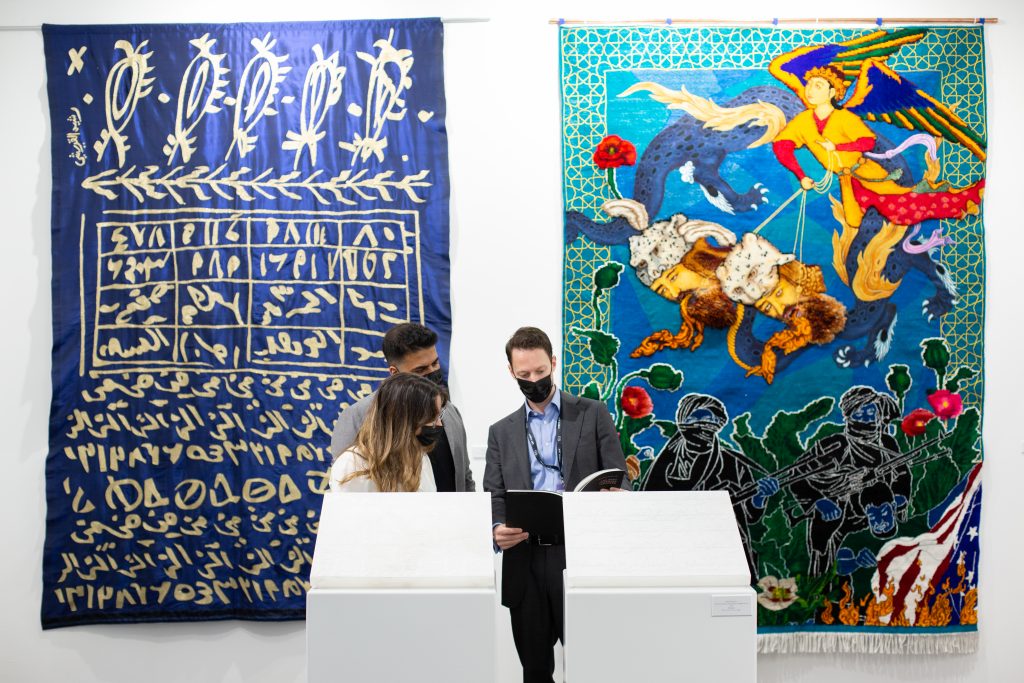 That’s not to say it was easy. “This has been a process of diving into the unknown,” said Pablo del Val, the fair’s artistic director. Participating gallerists had to take two PCR tests—one the day before the fair and another the day after it opened. Only visitors who had booked an appointment were permitted to enter, and the fair limited attendance to 600 people at once (250 fewer than the government-issued cap).

The scaled-back edition hosted 50 galleries from 31 countries—40 fewer than in 2019. It boasted the same glittering sponsors, BMW and Ruinart, as well as first-time supporter Salvatore Ferragamo. But many other hallmarks were missing: no fancy VIP lounge with collectors sipping champagne, no dressed-up patron’s preview, no media center, no food or beverage stands, and no expensive public program. (In their place was a social distancing-friendly film program and sculpture park.)

“We were concerned about how the experience would be since we had to sacrifice many of the special features,” del Val told Midnight Publishing Group News. “But instead, this seems to be the happiest week of the year so far.”

It was certainly a happy week for many dealers, who reported swift sales from the fair’s first day. On view was a mix of work by established and emerging artists with a focus on the Middle East, Africa, and South Asia. 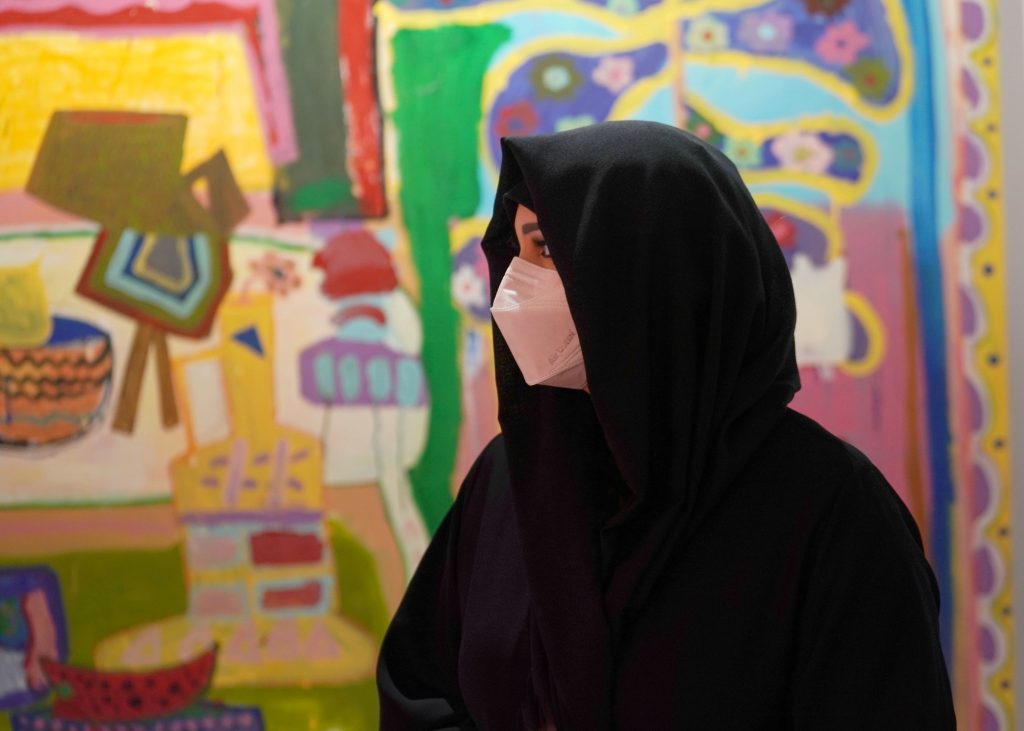 The fair has adopted a growing focus on art from Africa and its diaspora in recent years, and the material found an eager audience. Third-time participant Gallery 1957, with bases in London and Accra, sold four works by Ivory Coast-based artist Joana Choumali in the range of $10,000 to $16,000. Addis Fine Art, of Addis Ababa and London, sold works by rising Ethiopian star Tizta Berhanu in the region of £4,000 to £6,000.

“We find that [Dubai] is a great middle ground for us to connect with South Asia and the Middle East,” said Rakeb Sile, co-founder of Addis Fine Art.

International collectors flocked to Dubai in the dozens. Yet missing were the many museum groups that usually fill the aisles—an indication of the financial challenges facing institutions following the pandemic.

“Everything has a taste of fake here even if they are trying, except for Sharjah,” said collector Alain Servais, who traveled from Belgium for the event. While he did not find the art at the fair particularly compelling (“The art is the same everywhere”), he noted that the event “was well organized and big gallerists were in attendance and this tells you something.”

“When we travel for an art event, we are traveling to visit an art scene, so I am not coming here for Art Dubai, I am coming for Dubai and its art ecosystem,” he said. “It has world-class institutions such as the Jameel Art Center and the Sharjah Art Foundation, but still lacks art schools.” 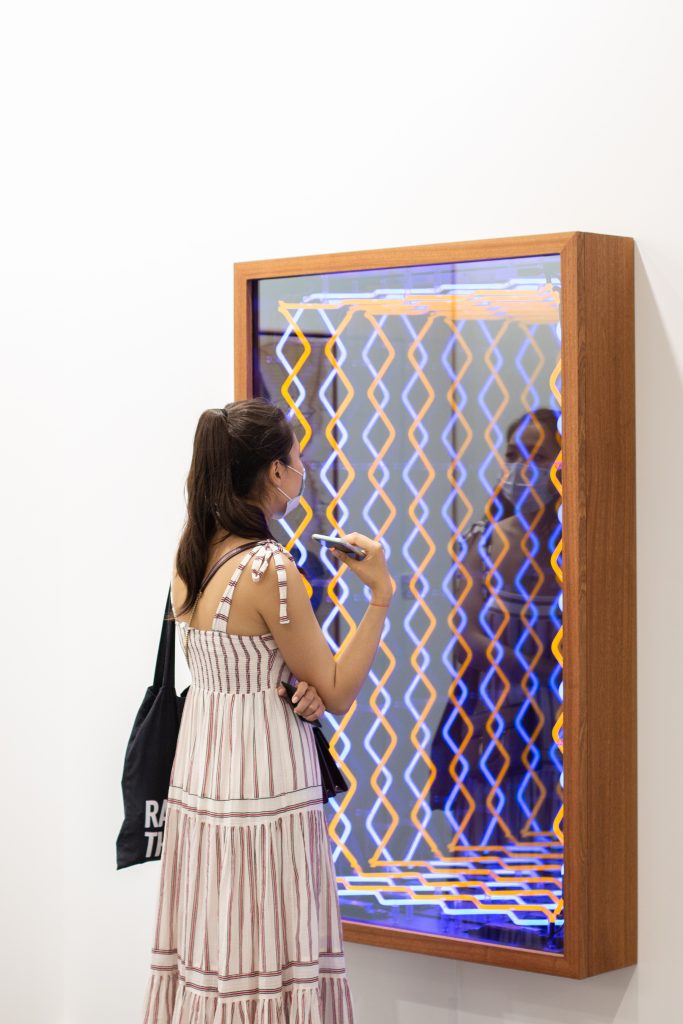 A visitor at Templon’s booth at Art Dubai 2021. Courtesy of Art Dubai.

On the Cusp of Change

The fair arrived at a moment of transition—and great potential—for the UAE. Last year, the emirate made “peace” with two longtime foes. It lifted the embargo on Qatar (whose royal family is full of deeply committed art collectors) and normalized relations with Israel.

Hebrew can now be heard throughout the city, an indication of the tourism boomlet that the agreement brought to the UAE. At one point early in January, The Times of Israel reported that more than 50,000 Israelis had flocked to the Gulf nation.

“People have discovered that Dubai is a more sophisticated place than they expected,” del Val said. “Many collectors from Europe have moved here to escape lockdown in their home countries.” Plus, he said, with restrictions on Hong Kong tightening and the Gulf nation’s normalization of relations with nearby countries, “the perception of Dubai is going to change a lot in the future.”

Others feel Dubai still has a ways to go in order to become a global player in the international art scene. “It may not be to the level of a ‘capital’ quite yet, but it is definitely a regional cultural hub,” said Anne-Claudie Coric.

One way or another, the recent geopolitical changes spell opportunity for the Gulf city. For one thing, dealers in Tel Aviv are increasingly considering setting up shop in Dubai. “Israel as a country is not surrounded by many friendly neighbors,” said Israeli art dealer Charly Darwich, who is opening TLV Fine Art in Dubai. “Dubai, without a doubt, is going to be the center of the world because many big cities are falling apart.”