Are NFTs a Shrinking Market or the Next Amazon? Kenny Schachter Wages War With Crypto-Cynics and One Irksome NFT Terrorist


Joshua Decter is a “writer, curator, theorist, educator, and editor” who really, really loathes NFTs, so much so he has been engaged in a months-long, cross-platform attack against me on everything from Twitter to Instagram, culminating in his threat last week to have his beef with me spill over onto the streets of New York. (He’s certainly not the first—or last presumably—to threaten to beat me up.) Decter is adamant that NFTs are divorced from art and exist as nothing more than a debased cryptocurrency scam. I am sorry to persist in pushing back on this, but his wholesale dismissal is entirely misplaced. He also happens to be the author of a 2013 book entitled Art Is a Problem. I’d suggest the real problem is more likely his intemperate machismo and childish, obstinate shortsightedness.

Let’s make something abundantly clear, once and (one hopes) for all: People think of NFTs as a thinly veiled currency (at best), which couldn’t be further from the truth. That became all too clear with the rapid rise of Ethereum, which all but violently thwarted NFT sales as the art couldn’t compete with the underlying crypto it’s traded in. To illustrate, the closing price of ETH on March 11th, the day of Beeple’s Christie’s sale was $1,826; since then, on May 11, ETH hit a high of $4,178. (As I write its fluctuating around $3,800.) If Vignesh Sundaresan (aka Metakovan) kept his hand off his keyboard during the frenzied Beeple bidding war, the 37,787 ETH he purchased it with—the equivalent of $69 million then—would have reached a high of $157,876,232 less than two months after his prescient (eye roll) acquisition! Regardless of ETHs trajectory, I’d hazard a guess that the present actual value of Beeple’s best is less than $10 million.

Video killed the radio star and NFTs killed the NFT star—by fueling ETH inflation. NiftyGateway, the highest-profile NFT platform, is cancelling hundreds of drops due to the fact that the torrent of content creation isn’t commensurate with today’s shrinking marketplace. (Incidentally, I have my do-or-die third NiftyGateway release coinciding with publication of this article. Fingers crossed.)

Larva Labs, programmers of 10,000 unique CryptoPunks (2017), a group of which fetched $17 million at Christie’s last week, rushed to market with their latest project, 20,000 Meebits, on the back of the Punks’ auction hype. Some complained they were aping “Bored Apes” by the Bored Ape Yacht Club (another collection of 10,000 “unique” NFTs). Are you following? The salient point is that “Meebits” are trading well below their launch price due to the overall constricting of NFT valuations, though creators Matt Hall and John Watkinson did bank another $75 million after their “Punks” auction. It’s revenge of the nerds—on amphetamines.

If you’ve ever seen Midnight Publishing Group News’s ace reporter Nate Freeman about town at a local watering hole, he resembles a throwback to a 1950s-era newshound, often clad in a brown tweed blazer with a notepad in one hand and martini in the other. But when it comes to NFTs, his mindset is as antediluvian as his attire. His Wet Paint column is nothing short of a relentless broadside against digital art and the cryptocurrency that underpins it. He recently complained that the Christie’s CryptoPunks buyer was host of a consortium of investors with a portfolio of Punks. Actually, that’s not altogether different from the Mugrabi clan and their passel of Basquiats, Warhols, Condos, et al.—who also happened to underbid on Urs Fischer’s recent NFT drop on Loïc Gouzer’s Fair Warning auction app. At least they have the foresight to adapt to a changing technologically enabled world, unlike my esteemed Midnight Publishing Group colleague.

Similarly, Tim Schneider, of Midnight Publishing Group News Pro’s The Gray Market recently authored a column headed: “Why NFTs Aren’t the Solution to Museums’ Deaccessioning Dilemmas or Any Other Big Problems, Either.” That was before the storied Uffizi Gallery in Florence sold an NFT of the Michelangelo painting “Doni Tondo” (1505-06) for €140,000 ($170,000). Not to gloat, but… I have been saying for ages (most recently in Austria’s Der Standard newspaper), that museums should sell NFTs alongside posters and postcards instead of deaccessioning art. Max Hollein, the director of the Metropolitan Museum of Art, whom I count as a friend (and who I hope won’t be offended), said in an interview that NFT deals are primarily propaganda for speculating in cryptocurrencies. He might reconsider before commencing a deaccessioning campaign of his own. 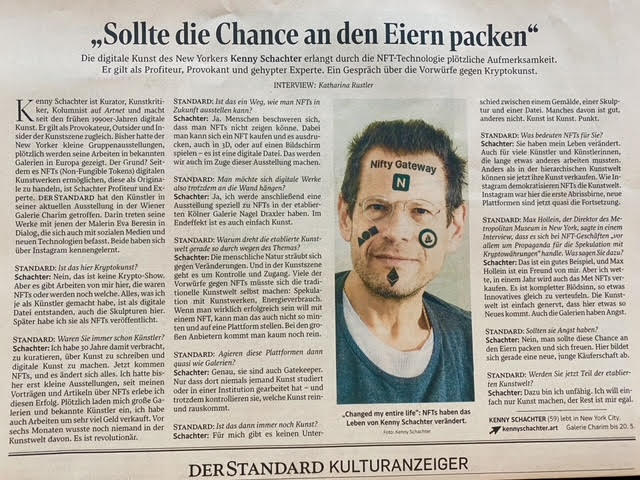 When it comes to NFTs, as Katharina Rustler of Der Standard interpreted it, “Grab chance by the eggs!” Courtesy of Kenny Schachter.

It’s not just Old Masters teaching the new by taking a lead in combating the staggering loss of revenues that COVID has wrought on art institutions, but commercial stalwarts like Art Basel and even eBay are getting in on the NFT game. Bitsky (Banksy’s Russian cousin?) is yet another startup that just raised $19 million from the likes of Serena Williams and Jay-Z, led by Marc Andreessen (who bears a striking resemblance to a Conehead of “Saturday Night Live” fame) of Andreessen Horowitz, a $16.6 billion tech fund that has cemented a chokehold on the NFT market, indicating a fervently bullish long-term view. (They’ve also been throwing gasoline on the NFT speculation fire through Clubhouse, the live convo app they’re backing that seems to host a different NFT hypefest every 10 minutes.) Bitski, for its part, is meant to employ a rudimentary consumer interface, creating ease for the crafting of NFTs payable by credit card and sidestepping the fear and hesitancy of crypto-cynics. 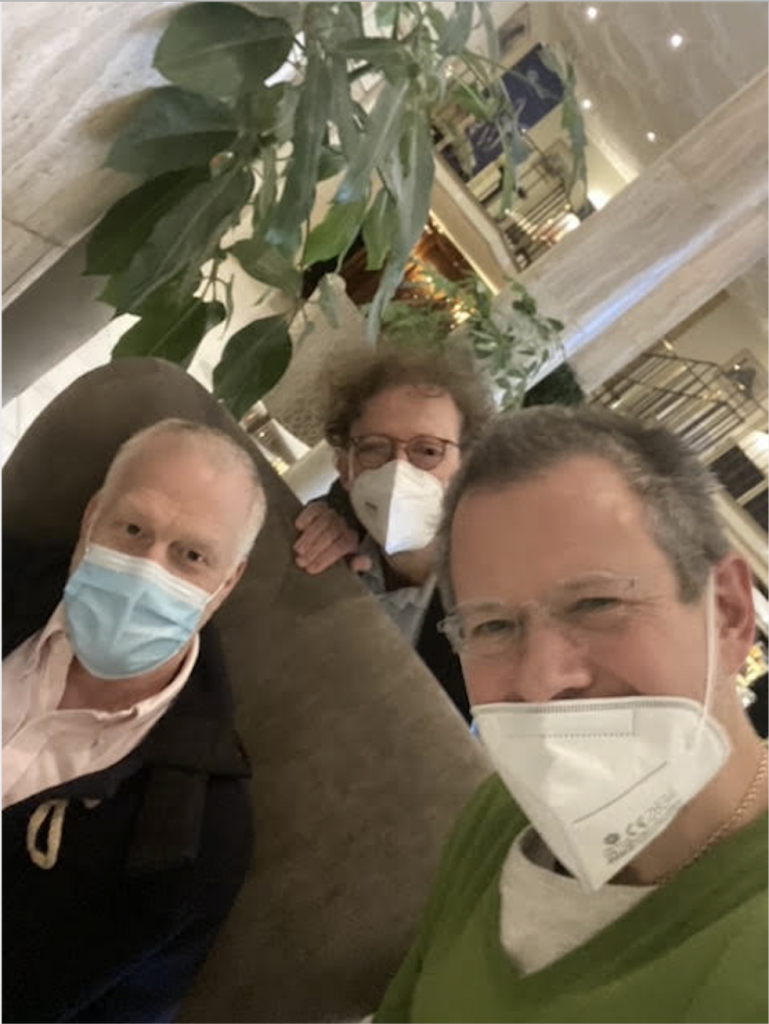 German art royalty: Johann Koenig (who’s got a few new ideas up his sleeve when it comes to role of art dealer) and Daniel Hug, director of Art Cologne, which is coming up in November’s return to normalcy. Courtesy of Kenny Schachter.

Bafflingly, it is the historically staid auction houses, instead of galleries, that have been at the forefront of acclimating to the changing landscape of the art world vis-à-vis technological innovation. Except, that is, for Johann König and Nagel Draxler—at whose Cologne gallery I curated “Breadcrumbs: Art in the Age of NFTism,” through August 21. König has gone as far as staging auctions and initiating his own platform with Dapper Labs— the marketplace known for CryptoKitties and NBA Top Shot Moments—to sell NFTs, while also potentially offering fractionalized ownership opportunities for emerging artworks, just like the wildly popular stock-trading app Robinhood does for meme stocks. I asked Johann, “What are you trying to be with all this frenetic activity?” He replied, without missing a beat: “Amazon!” The question of whether (or not) there is a mass public business for art rivaling Apple and Alibaba remains to be seen.

Here’s a video starring a Paul Thek that is part of Kenny Schachter’s NiftyGateway drop.

Christian Nagel, for his part, is a pillar of the German gallery scene, having opened his first space in Munich in 1986 and, four years later, in Cologne, where he began exhibiting works by the likes of Martin Kippenberger, Franz West, Günther Förg, Michael Krebber, Cosima von Bonin, Andrea Fraser, Charline von Heyl, and Martha Rosler. Saskia Draxler, a philosopher and cultural critic, joined as a partner in 2009. As far as NFTs? Nagel informed me that, were it not for a Clubhouse chatroom when a critic questioned the gallery’s commitment (or rather antipathy) to crypto art, I wouldn’t have found myself in Cologne curating what might well be the first meatspace NFT art show in a conceptual art gallery. 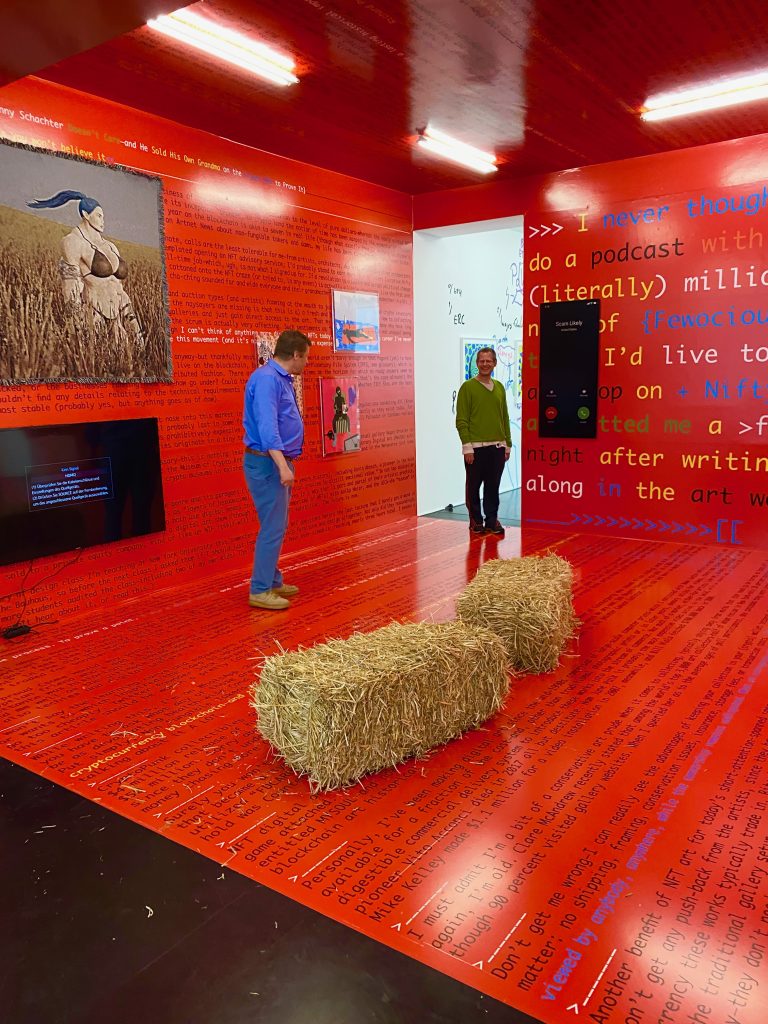 Nagel Draxler gallerist Christian Nagel and me in my new show. Courtesy of Kenny Schachter.

The exhibitions itself is indistinguishable from a non-NFT show inasmuch as there is an installation-based framework upon which photos, computer printouts, paintings, and objects are presented—but it will have a parallel expression as a series of Non-Fungible Token drops, which will follow on OpenSea in the coming weeks. The artists range from such pioneers in the NFT space as R. Myers, Max Osiris, Dot Pigeon, Kevin Abosch, Robness, Osinachi, Ruylton Fyder, Sarah Friend, Olive Allen, and Anna Ridler, commingled with regulars on the contemporary gallery circuit like Tracey Emin, Darren Bader, Eva Beresin, Theo Triantafyllidis, and Koichi Sato (and me, of course!). The imprimatur of the venerated gallery Nagel Draxler is as significant as any of the participating artists in the exhibit, as the embrace of NFTs in such a context speaks volumes about their acceptance, legitimacy, and credibility.

In other news, I received an actual (if unusual) ransom letter last week from Alfred Itchcock, the buyer of the NFT I helped Jerry Saltz release for charity last month. In it, Itchcock stated this was nothing less than an act of digital terrorism and threatened to shred Jerry’s “The First 10,000” unless Saltz engaged in some specific acts regarding the smart contract accompanying his NFT that would entail paying a transaction fee of anywhere between approximately $2,000 to $10,000. Though it wasn’t entirely clear, the purported intent appeared to teach Saltz a lesson for initially criticizing and dismissing NFTs, and (maybe?) prove they have import and significance beyond the low effort Jerry expended on the creation of his. 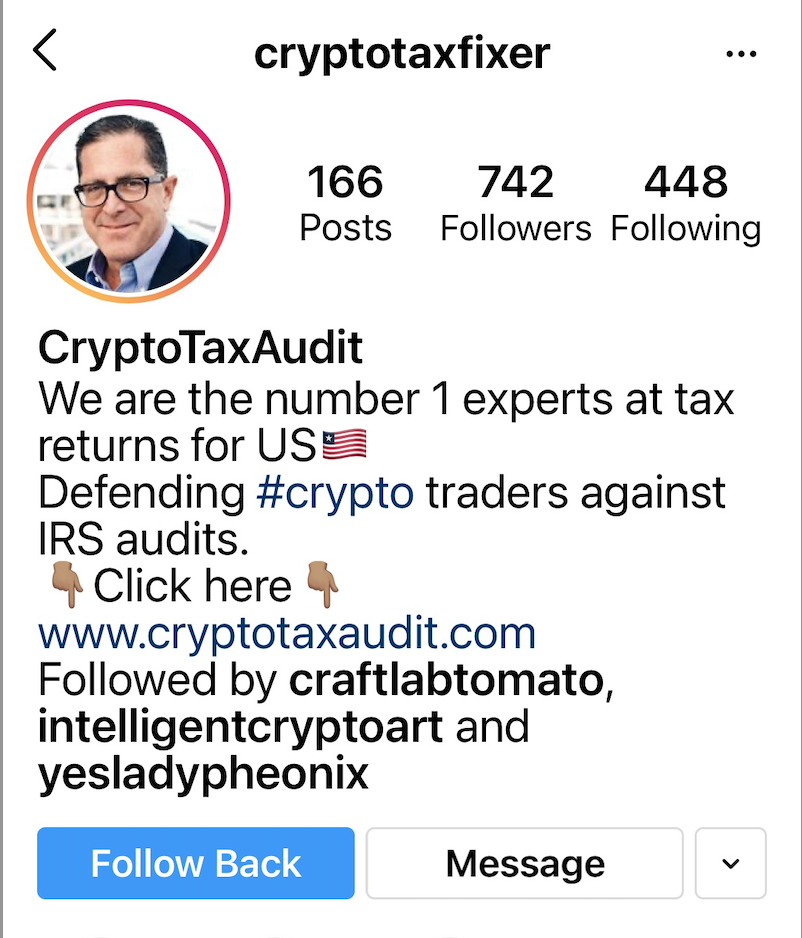 The self-proclaimed crypto-tax fixer, sure to be the accounting world’s busiest man! Courtesy of Kenny Schachter.

In Alfred’s own (semi-legible) words: “A concrete consequence of “The First 10,000” being shred is that it stops being transferable. It’ll be “lost” in a sense that’s very real to people here. Not being transferable means it can’t ever be resold so you’ll never get royalties from secondary sales. Hence NFT terrorism 🙂 I don’t encourage burning/shredding NFTs since it’s unfair to the artist. One exception is when used as a counter-trolling move. “The First 10,000” isn’t shred yet, it can still be recovered by making one single Ethereum transaction. If that doesn’t happen by May 28 then surely it’ll be shred and lost forever. Luv you all, Best! Alfred”

He closed with line: “DONT PUT YOUR PRIVATE KEYS IN THE WRONG PLACE.” (Thanks for the heads-up, Alfred!) I responded with my inimitable diplomatic brusqueness, the sentiment of which Jerry was fully aligned with: “We wouldn’t pay 5 cents to save this NFT, so your point (whatever that may be) is moot. Knock yourself out and have a ball.” So long “The First 10,000”… till the next. This encounter affirmed one thing for sure: techies are weird.

An article on Paul Thek was published in The University Chicago Journal quoting the artist from 1965: “The world was falling apart, anyone could see it, I was a wreck, the block was a wreck, the city was a wreck; and I’d go to a gallery and there would be a lot of fancy people looking at a lot of stuff that didn’t say anything about anything to anyone.” At present, the world is a wreck. No, NFTism isn’t going to affect things in the big (or little) scheme of things overall—but art may very well instill a greater sense of empathy and humanism, so sorely missed across the globe in the face of war, Covid, and hatred. I am simply a proponent of more artistic expression and communication in whatever form pleases, and less irrational judgments and actions to the contrary.