A Mystery Inscription on ‘The Scream’ That Baffled Experts for Decades Was Written by Edvard Munch Himself, New Research Shows


Curators at the National Museum of Norway have concluded that an enigmatic inscription hidden within Edvard Munch’s famous painting The Scream was authored by the artist himself.

Experts have long been aware of the gloomy sentence nestled in the top-left hand corner of the painting, which reads “Can only have been painted by a madman,” but have been baffled as to its origin.

The pencil inscription was added onto the painting years after Munch completed it, in 1893, which led some to believe it may have been added by someone else. Museum curator Mai Britt Guleng tells Midnight Publishing Group News that some experts even believed that it could have been an act of vandalism.

“In 1904 it would be unthinkable to an art critic that an artist would make such an inscription on the surface of his own painting,” Britt Guleng says. While texts in paintings have appeared throughout art history, such as in medieval text rolls, or text plaques in portraits, this acerbic comment was something different. “This inscription is not an explanation about the motif as in the other cases. This is a comment about the painter’s mental health, something an art critic would never expect an artist to make himself,” the curator says.

A closeup of the infrared scan of the inscription on Edvard Munch, The Scream. Photo by Borre Hostland, courtesy the National Museum of Norway.

Experts were studying the pencil inscription before the painting goes on display at its new home, the National Museum of Norway, which is due to open in Oslo in 2022. Using infrared technology and handwriting analysis to compare the writing with Munch’s notes and ephemera, all the evidence points to the troubled artist as the author of the inscription.

Art historians believe that Munch could have scrawled the addition to the painting in response to the critical reception the work received when it was exhibited for the first time in his home country in 1895. The deep state of anxiety the picture invokes led critics to speculate wildly on the artist’s mental state. A young medical student went as far as to argue that Munch’s unsettling paintings proved that he was not of sound mind during a discussion where it is believed Munch was in attendance.

Deeply hurt by this indictment of his mental health, Munch obsessed over the incident, returning to it time and again in various letters and notes. “Munch was a complex person and the reason why he wrote it is probably just as complex,” Britt Guleng says. “He wanted to provoke but he also wanted to be respected. It was important for him to take control of the story about Munch both to himself and to the public.”

She adds that the artist might have written the inscription in a moment of melancholy, or while drinking. “It is both a sore and sarcastic comment.” The painter might even have forgotten writing the comment, as you need to get up close and personal with the painting in order to spot it. 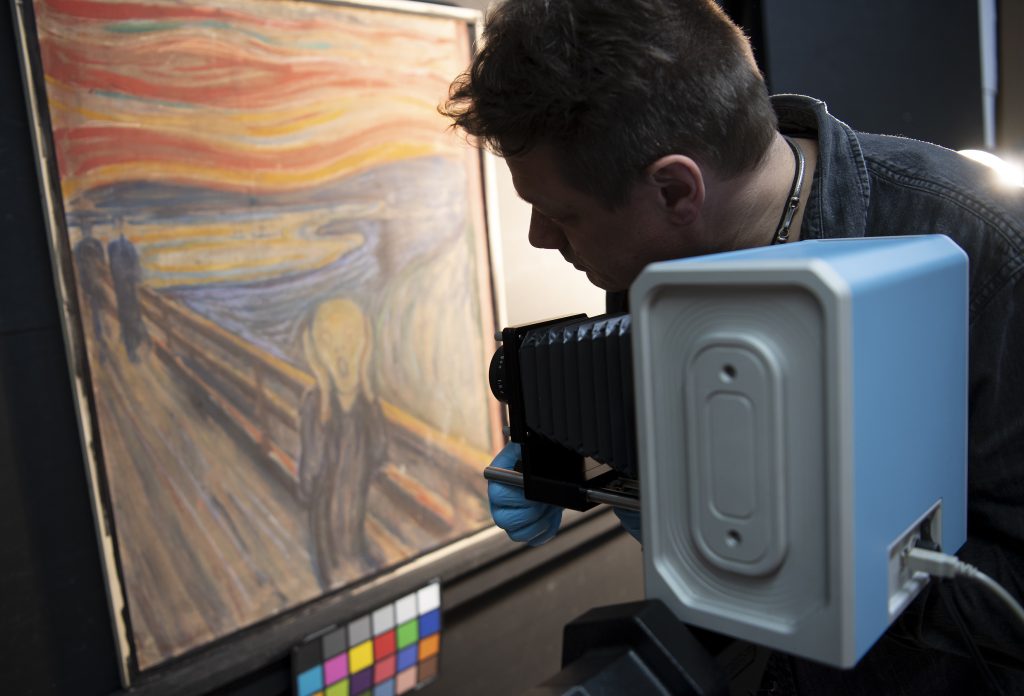 Munch’s whole family was prone to bouts of ill mental health, with both his father and sister suffering from depression, and the artist himself was eventually hospitalized in 1908 following a nervous breakdown.

The Scream will go on view alongside some of Munch’s other best-known works, including Madonna, The Dance of Life, and Self-Portrait with Cigarette, in the new museum’s dedicated Munch room. New research is being conducted on the body of work ahead of the museum’s planned opening in 2022.

Britt Guleng is confident that there is more waiting to be uncovered about the great artist’s work. “There will be many discoveries in the years to come, but only time will show what,” she says. “New questions arise that makes us look at the sources in a new light.”