Steve Cohen and Dan Sundheim, known for their blue-chip art holdings, are pouring hundreds of millions of dollars into sports collectibles, a niche market that’s been on fire since the pandemic.

The art world, myself included, is catching up with the craze. While I know my 1932 Picassos and 1982 Basquiats, I am a complete neophyte when it comes to rookie cards of Mickey Mantle, Wayne Gretzky, or Mike Trout.

Apparently, I am not alone.

Art adviser Anita Heriot unwittingly found herself giving a crash course on the topic to her new British colleagues while getting them up to speed on the portfolio of one of her top clients. The collector’s holdings included works by Mark Rothko and Andy Warhol, but the most valuable and fastest appreciating asset was a trove of trading cards.

This was unfamiliar territory for a group of art advisors. “What are trading cards?” Heriot said her colleagues asked.

A baseball signed by Babe Ruth that was put up for auction in October 2016 at Christie’s New York. (Photo by Spencer Platt/Getty Images)

Pocket-size trophies featuring legendary and contemporary athletes as well as their sneakers and jerseys, bats and balls have soared in popularity, taking the sector from $1 billion to $10 billion almost overnight, according to research by Goldin Auctions, a rapidly growing house for sports memorabilia.

Boosted by wealthy millennials, fractional ownership companies, and growing digitization, baseball, basketball, and hockey cards have fetched as much as works by Calder and Condo. For actor Rob Gough, buying a 1952 Mickey Mantle rookie baseball card for $5.2 million was like getting the Mona Lisa.

“Money is cheap and people are hedging against inflation by buying hard assets,” said Chris Ivy, the head of Heritage Sports, which sold more than $100 million of sports collectibles in 2020.

A popular hobby in the 1980s and 1990s, sports cards are now considered an asset class. “People who are now in their 40s and 50s have disposable income to invest in these cards,” Ivy said. “When the pandemic hit, they were bored, stuck at home.”

Those who as kids had trading cards spilling out of shoeboxes in their closets now collect for both sentimental and investment reasons. “It makes you feel young again,” said Ralph DeLuca, a consummate collector of trading cards, vintage movie posters, and contemporary art. “And the fact that something that brings them pleasure from their youth is also an amazing investment vehicle if you handle it right is very intriguing to people.”

Capitalizing on the rising demand, investors such as Cohen Private Ventures, Sundheim’s D1 Capital Partners, and Blackstone Group, whose CEO, Stephen Schwarzman, is a major art collector and museum patron, are investing in companies that manufacture, sell, and appraise these collectibles.

“It just shows the strength of the market,” said Simeon Lipman, a veteran pop culture specialist and appraiser. “You see a lot of big guns jump in because they see an opportunity.” 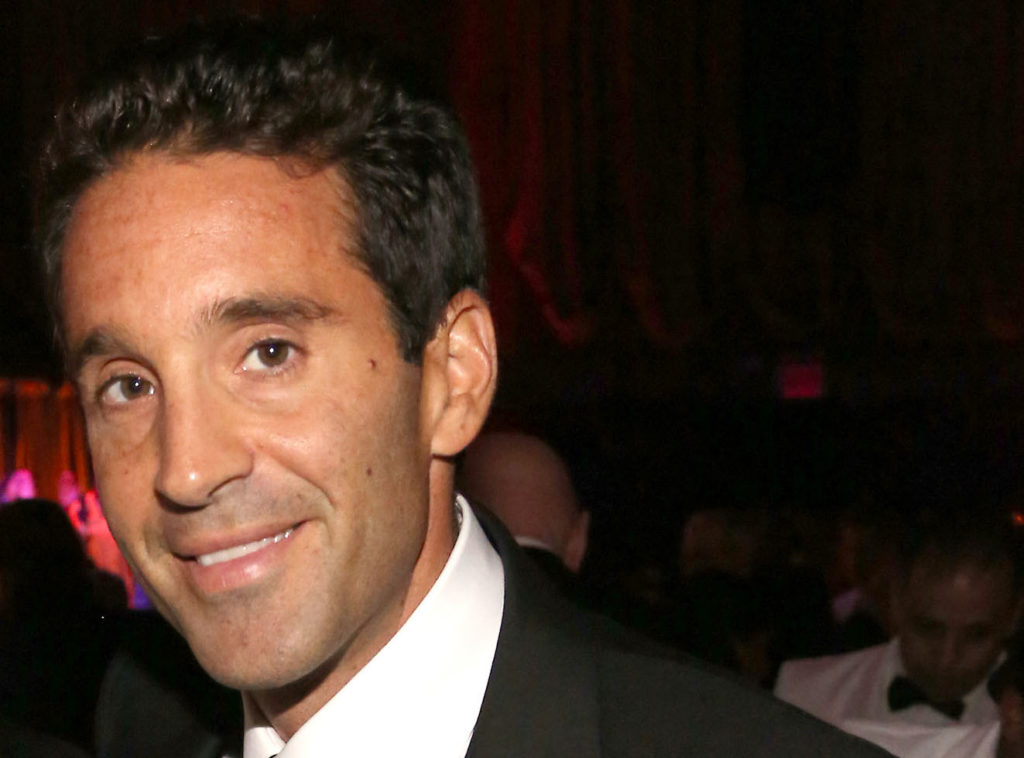 Collectors Holdings, a company formed by Cohen, Sundheim, and entrepreneur Nat Turner, acquired Goldin Auctions for an undisclosed price believed to be around $200 million.

Meanwhile, Blackstone agreed to buy Certified Collectibles Group, which authenticates and grades items for sale, and has been valued at $500 million.

The arrival of some of the world’s biggest collectors into this space makes sense given that some of them own sports teams. Cohen owns the New York Mets and has been vocal about collecting memorabilia. Sundheim bought a minority stake in the NBA’s Charlotte Hornets from Michael Jordan in 2019. Both collectors declined to comment.

Traders in this field include musicians, sports figures, and “your regular contemporary art collectors, especially those who made money in crypto-currency or tech industry,” she added.

Auction houses are trying to cultivate the crossover. In November, Goldin and Sotheby’s organized a joint auction, “A Century of Champions,” with 74 lots ranging from sneakers to rookie cards. The results were mixed. While the sale totaled $3 million, with 67 percent of its bidders new to Sotheby’s, more than a quarter of lots failed to find buyers.

“Our customers prefer to deal with our platform,” Ken Goldin, the auction house’s founder, said this week.

But sport has a much broader appeal than art—and so do sports collectibles.

“With art, it’s very subjective,” said DeLuca. “You can say, ‘Oh I have an Andy Warhol,’ and it can be the wrong size or the wrong color, the wrong series than the market wants right now.”

Figuring out the value of trading cards and other sports collectibles is a lot easier. “That’s why Robinhood people and crypto people and hedge fund guys like trading cards,” Goldin said.

Price depends on the condition, which is determined by a handful of grading and authentication companies. One of them, PSA, was acquired by Cohen, Sundheim, and Turner’s Collectors Holdings in a $853 million deal earlier this year.

The agencies grade the items and encase them in hard plastic shells that can’t be opened, a process called slabbing. While there are numerous cards of the same player, only a couple may merit the top ranking—and record prices.

“Once it’s slabbed with a grade, a card becomes a commodity,” DeLuca said. “You can trade it like a stock.” 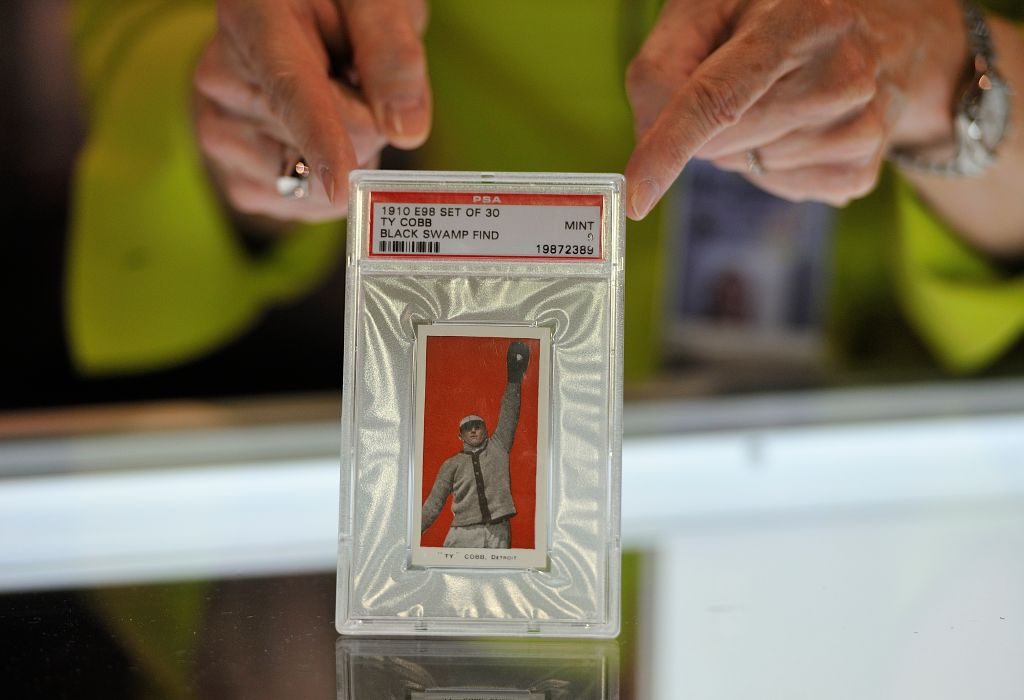 Ebay, a major marketplace for lower-priced material, sold 18 million trading cards, generating more than $1 billion in the first quarter this year, the company said. That amounts to about 130 sales a minute, and a 345 percent increase from the same period in 2020.

At moments, the demand threatened to overwhelm the system. At Heritage Sports, the wait time for ungraded material is six months to a year, Ivy said. In March, a tsunami of submissions and a million-card backlog at PSA forced the company to suspend grading lower-priced items.

“The sheer volume of orders that PSA received in early March has fundamentally changed our ability to service the hobby,” Steve Sloan, the company’s president, said in a letter to clients on March 30. “The reality is that we recently received more cards in three days than we did during the previous three months.”

This month, some of the services returned, albeit at higher prices “to manage demand,” Sloan said.

As a sign of further commodification, some are trying to leverage their troves of cards and collectibles. In the past year, a handful of investors approached lenders like TCP Art Finance, but so far values haven’t met the company’s minimum loan amount of $500,000.

“It’s something we would consider if the collection was valuable enough,” said Joe Charalambous, the company’s president.

But not everyone is planning to jump in.

“Dan and Steve are especially interested in this world,” she said, referring to Sundheim and Cohen. “I don’t think I have a lot to add. In the end, I am going to stick to my lane.”