We Know the Art Market Is in Recovery. But How Do the Numbers Stack Up to Pre-Pandemic Times?


The marquee evening auctions coming up in New York next week have been deemed the first major test of the art market coming out of the lockdown era. But data from the Midnight Publishing Group Price Database suggests that the art business is already in a better position than it was at the same juncture pre-lockdown in 2019.

Both supply and demand also appear to be stronger in March 2021 than they were in the equivalent month in 2019. How can we tell—and why should we care? Read on for the rundown. 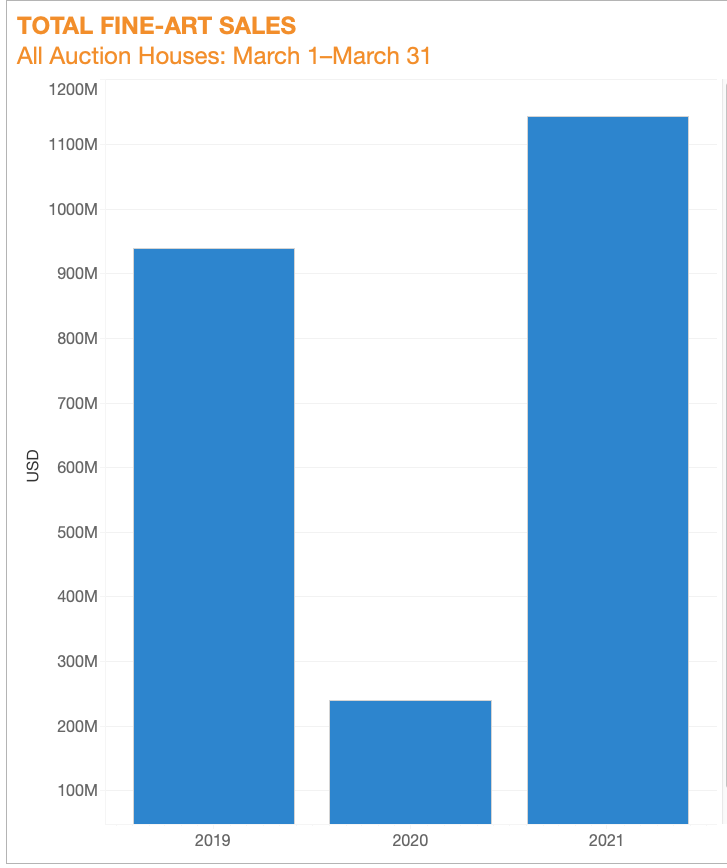 –Both the number of lots offered (one way to gauge supply) and the sell-through rate (which some see as a proxy for the size of collectors’ appetites) were up in March 2021 compared to March 2019.

IS THIS EVEN A FAIR COMPARISON?

–Hold up, you might be thinking. Is this comparison apples to apples?

–Well, both months under examination saw heavyweight Impressionist & Modern and postwar and contemporary art evening sales in London, as well as major Chinese art sales in Hong Kong. So it’s as close to apples to apples as we can expect to get in the increasingly shifty unsettled landscape.

SO WHAT’S GOING ON HERE, EXACTLY?

–Part of the shift may be due to an increased number of sales, perhaps driven by pent-up energy from lockdown. March 2021 has hosted more fine-art auctions than the equivalent month in 2019—572 vs. 519.

–But more than anything, the increase appears to be attributable largely to a growing number of pricey lots hitting the block. In March 2019, seven works sold for $10 million or more at auction; in March 2021, that figure more than doubled, to 15 works.

–These trophy lots alone account for a quarter of the total $1.1 billion in fine-art sales at auction houses around the globe in March 2021.

–Zooming out, this growth at the top tracks with trends in overall wealth distribution: the world’s richest saw their fortunes grow by an estimated 20 percent last year, according to Forbes.

WHAT DOES THIS MEAN FOR NEXT WEEK?

–All this bodes quite well for the outcome of next week’s marquee evening sales. In 2019, the major drag on the market was a lack of high-priced works. In the first six months of 2019, total auction sales of works over $10 million dropped by 35 percent year over year, according to the fall 2019 Midnight Publishing Group Intelligence Report.

–Now, that trend looks like it’s headed for a reversal. Not only is there enough supply of top-flight works for them to be sprinkled across the spring (rather than hoarded for the big sales in May), but there also appears to be strong enough demand to greet them, pushing prices up.

–Keep your eye on the top end of the market, folks. There may be some fireworks in store.