Want to Get a Jump on the Competition? Here Are 6 Rising-Star Artists to Seek Out at the 2021 Armory Week


While timed entry and crowd control mean that New York’s Armory Week fairs are roomier than they have been at other peak market moments, sales are moving along at a steady clip. Most in demand are paintings that put a twist on figuration, whether by placing the human form in surreal, imaginary settings or by rendering it with novel digital tools.

Gone are the days when collectors clamored for rediscovered dead artists from the ’60s and ’70s. Today, they want the chance to get in on the ground floor—the first time around.

Which artists across New York’s fairs are generating the most buzz this week? See our picks are below. 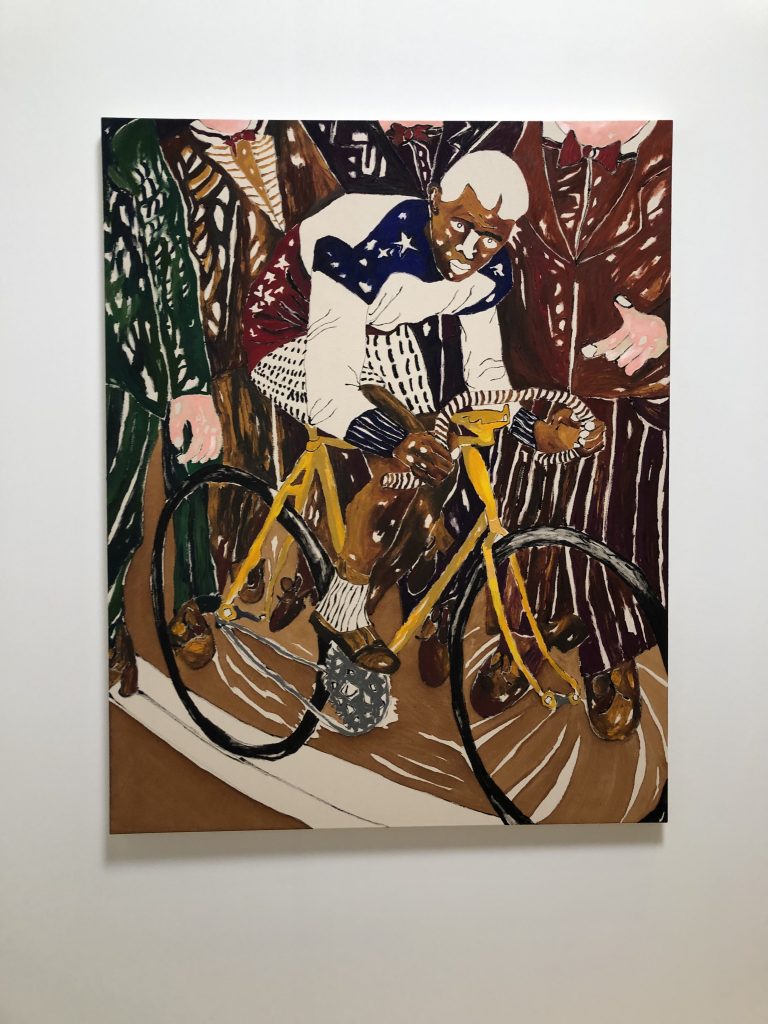 Who: Chase Hall (b. 1993) is a self-taught artist who explores themes of race and identity in paintings of Black jazz musicians, athletes, as well as creatures big and small (an homage to his childhood obsession with Animal Planet). His use of raw cotton canvases and ground coffee beans alludes to the history of slave labor. Instead of using white pigment, Hall leaves parts of his canvases unfinished, equating the negative space with whiteness.

Why You Should Pay Attention: At least three museums are among those trying to get their hands on Hall’s works at Independent. The Institute of Contemporary Art, Miami, bought a painting from his debut with Monique Meloche in 2020; Chase’s solo show with Clearing gallery in New York sold out earlier this year. The Studio Museum in Harlem and the Rubell Museum in Miami also own his work.

Notable Resume Line: Hall participated in the prestigious residency at the Skowhegan School of Painting and Sculpture and was a resident at MASS MoCA.

Up Next: A solo show with Galerie Eva Presenhuber in Zurich, Switzerland, in April 2022. 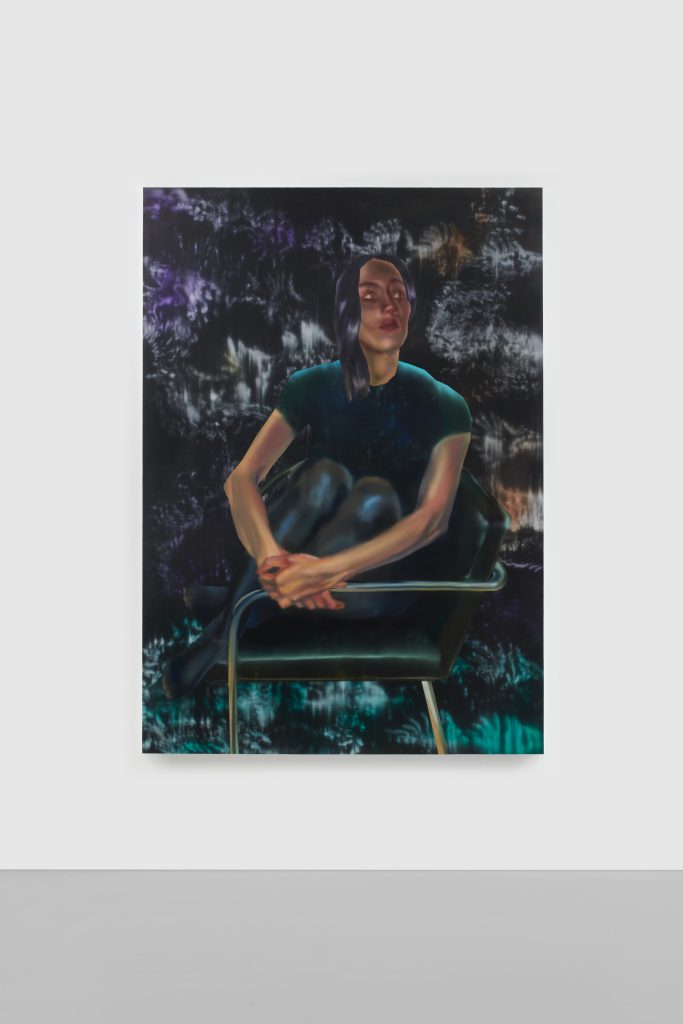 Who: Rute Merk (b. 1991) explores the role of the digital in contemporary painting. She contrasts hard-edged shapes with sfumato technique to build up eerie and mystical portraits of androgynous, post-human characters.

Based in: Berlin, Germany

Showing at: Downs and Ross, New York, at Independent

Why You Should Pay Attention: Collectors and museums in the U.S., Europe, and Asia are are clamoring for the paintings. Her collaboration with fashion house Balenciaga on a series of works resulted in her first show at Downs and Ross.

Up Next: In 2022, the artist will have solo shows at an institution in Shanghai and at Downs & Ross in New York. She will also be included in a number of group museum shows, including at the Green Family Art Foundation in Dallas. 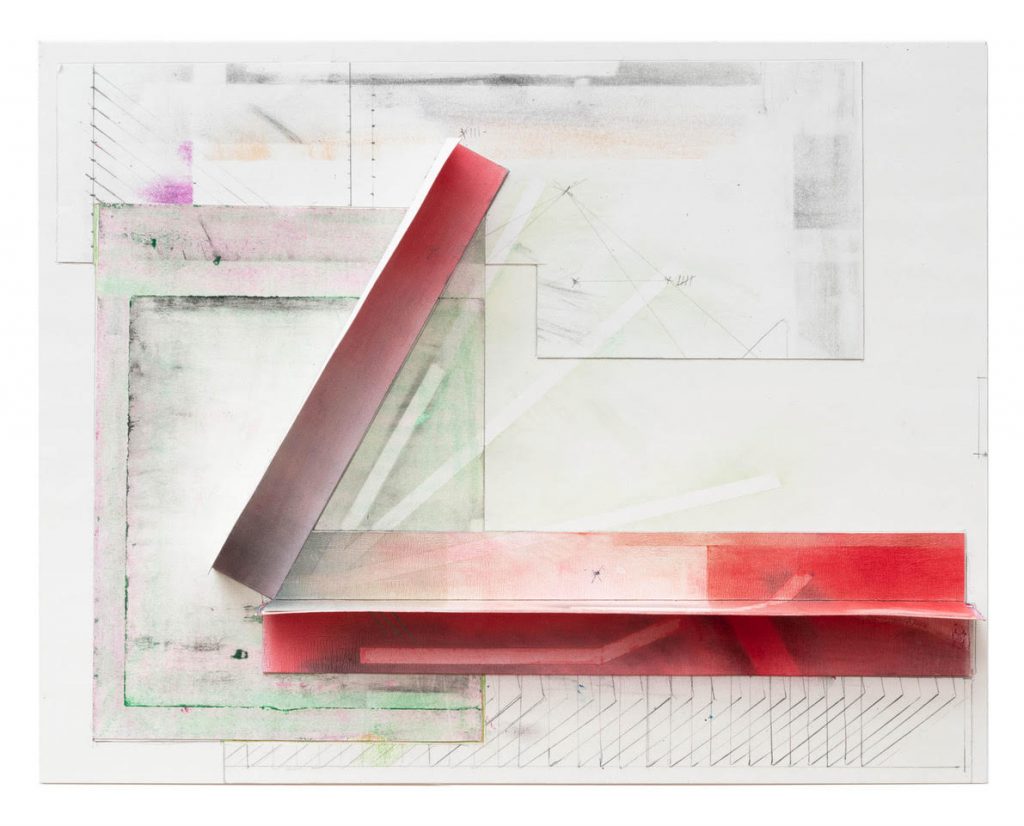 Who: Deb Sokolow (b. 1974) is building up a piercing yet humor-accented body of work largely centered on architecture and how it must adapt to our increasingly damaged world—an enterprise equally informed by scholarly investigations into canonical greats like Frank Lloyd Wright and bleary-eyed “Where did the night go?” internet sleuthing into the ever-expanding vortex of conspiracy theories.

Prices: Her latest series of drawings, which use mixed media and collaged relief elements to visualize the floor plans of various borderline-fantastical interiors, range from $3,000 to $10,500.

Why You Should Pay Attention: Sokolow’s work has attracted the literal and figurative buy-in of numerous noteworthy U.S. institutions from Washington, D.C. to Los Angeles, but Western Exhibitions founder Scott Speh said that the artist has yet to find as much traction in New York.

Notable Resume Line: Institutions that have acquired pieces by Sokolow include the Los Angeles County Museum of Art, the Museum of Contemporary Art Chicago, the Wadsworth Athenaeum, and D.C.’s Hirshhorn Museum and Sculpture Garden (where she was also curated into the 2019 group exhibition “Manifesto: Art x Agency”).

Up Next: New works directly related to those on view at the fair will be featured in the November edition of David Zwirner’s Platform, so jump on them now before the global masses start reaching for their digital shopping carts. 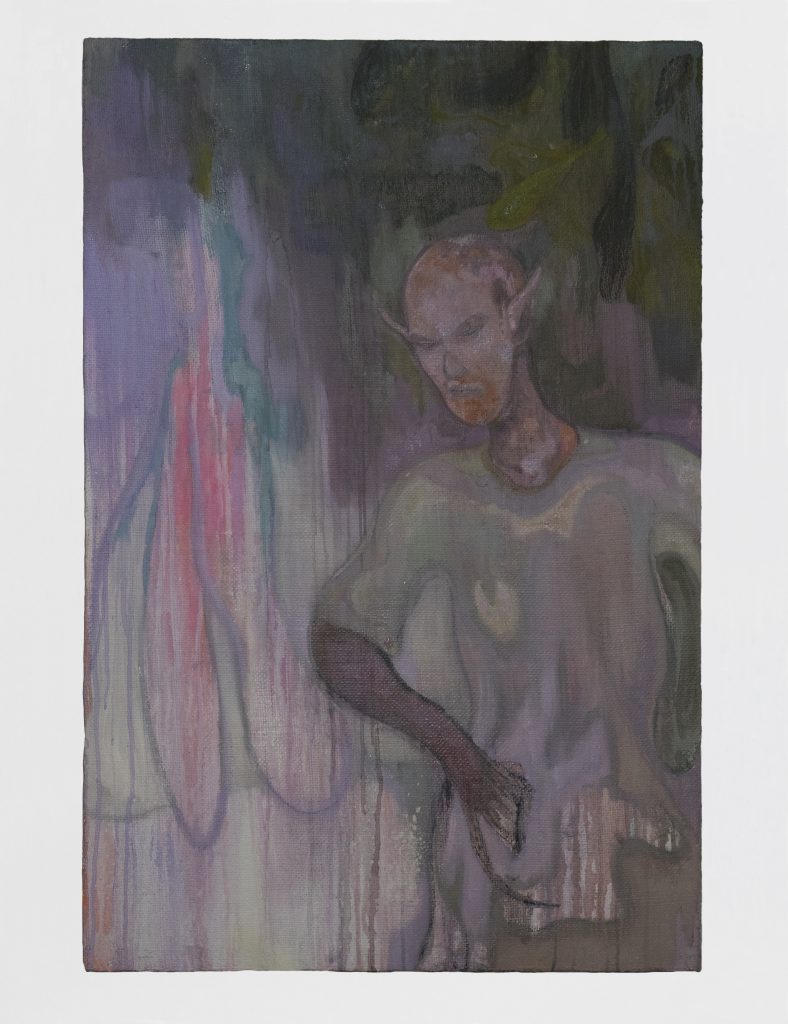 Who: Sedrick Chisom (b. 1989) has earned himself a devoted fan base with his eerie paintings inspired by a 60-page play he wrote called 2200, about a future in which all people of color have been transported away from Earth, leaving white people to engage in civil war.

Why You Should Pay Attention: Chisom isn’t the only young artist working today who is painting dreamy, surreal scenes from imagined futures. But the expansiveness of his imagination (in his narrative, white people develop a medical condition that alters the pigment of their skin and mutates their features) and the skill with which he creates these indelible scenes make him stand out. All the works in Matthew Brown’s presentation—which were smaller than his typical scale—were spoken for by Thursday afternoon.

Notable Resume Line: A solo show of his work just closed late last month at the star-making gallery Pilar Corrias in London. He was awarded the 2018–2019 VCU Fountainhead Fellowship in Painting and Drawing and was a 2019 resident at Skowhegan School of Painting and Sculpture.

Up Next: His first museum solo show at an unknown venue… Matthew Brown’s director said “they’d have my head” if she gave any hints. 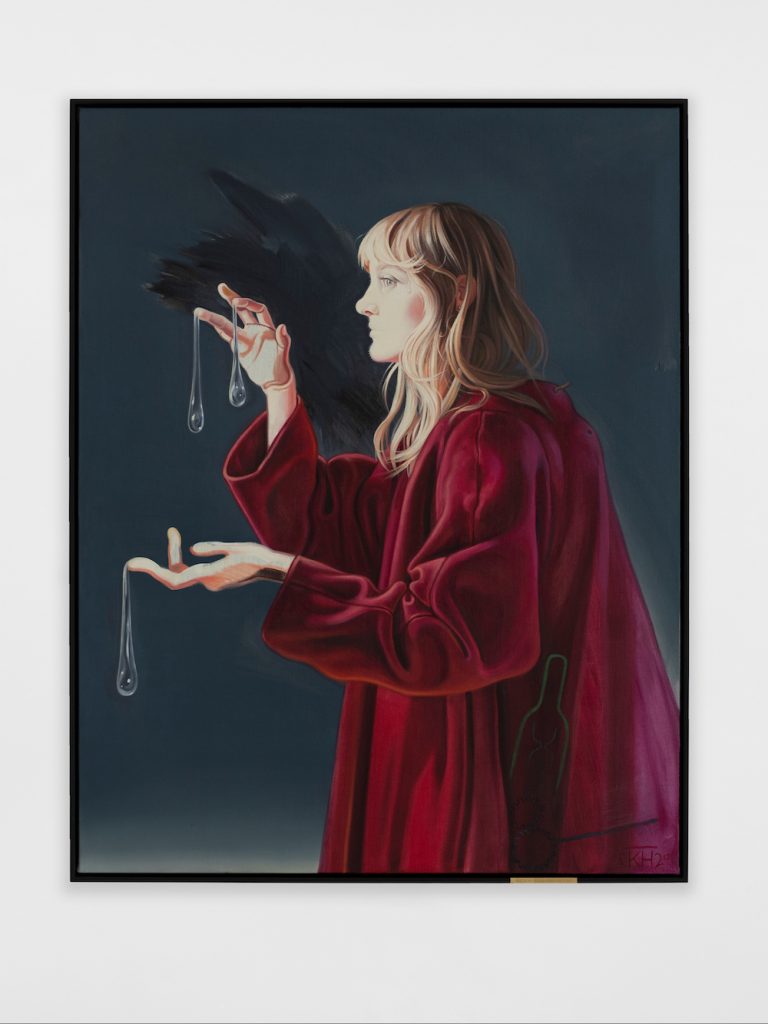 Who: Kati Heck (b. 1979) is a skilled painter whose style mixes Old Master influences with a healthy dose of the surreal and the weird. Think of her work as a mash up of Frans Hals, Balthus, and Picabia, filtered through the female gaze.

Based in: Pulle, Belgium

Showing at: Sadie Coles Gallery, London, at the Armory Show

Why You Should Pay Attention: Heck has shown at nearly every major institution in Antwerp, but she has yet to really break through in the U.S. She counts among her collectors the American hedge-fund manager Andrew Hall and the French heir Antoine de Galbert. Two of the three works by the artist at the Armory Show had sold by Thursday afternoon.

Notable Resume Line: Heck recently had her second solo show, “Bonnie Bonne Bon,” at Sadie Coles this past summer. Her work was chosen for a 2009 show at Bozar curated by Ai Weiwei and Luc Tuymans.

Up Next: A solo exhibition with Tim Van Laere Gallery in Antwerp next year. 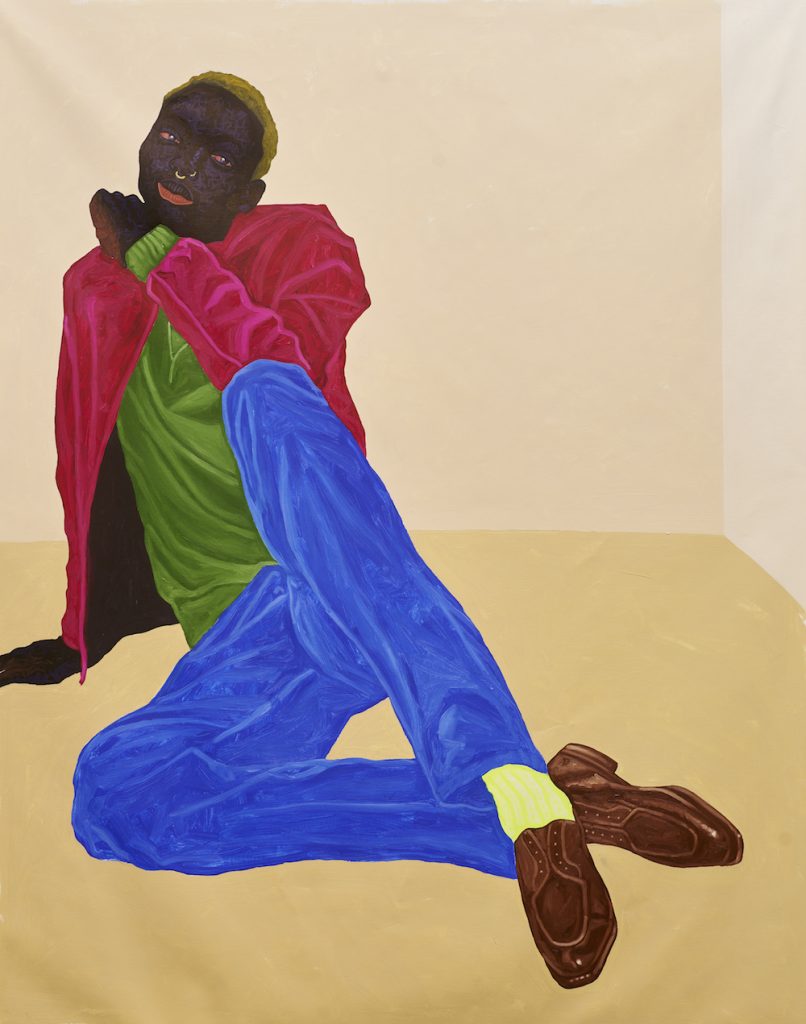 Who: Striking portraits by Kwesi Botchway (b. 1994) were drawing serious buzz during the Armory Show’s VIP preview. The artist told us at the fair that he is drawn to characters who “are bold in the way they dress, or how they carry themselves” and has previously said he aims “to elevate Blackness and also what Black truly represents.”

Based in: Ghana and Frankfurt (where he is currently studying at the Frankfurt Art and Design Academy)

Showing at: Gallery 1957, London and Accra, in the Armory Show’s “Presents” section

Why You Should Pay Attention: Along Amoafo Boako and Otis Kwame Kye Quaicoe, with whom he studied at the Ghanatta College of Art and Design, Botchway is at the vanguard of a new generation of West African painters. His large portraits had already sold out by the morning of the Armory Show’s VIP preview.

Up Next: A solo show at Maruani Mercier gallery in Brussels.