Every week, Midnight Publishing Group News brings you Wet Paint, a gossip column of original scoops by our crack team of reporters. This week, we welcome Julie Baumgardner into the mix…

Usually fashion lays claim to tennis as its sport, but there’s news out of the U.S. Open that crashes into the art world. American singles player Reilly Opelka recently was fined by the United States Tennis Association for sporting a pink tote bag from Belgium’s Tim Van Laere Gallery.

No, the problem wasn’t that tote bags are contributing big time to the climate crisis. It was that the branded bag was “unapproved” (under USTA rules, players cannot wear any gear on the court with logos that exceed four square inches). Opelka—the highest ranking American men’s player in the U.S. Open, who has been deemed the “next great hope” for U.S. men’s tennis—was summarily slapped with a $10,000 fine.

It didn’t take long for the situation to catapult this little pink tote into a blurry confluence of art project, practical object, cult status symbol… and, as Venus Williams joked on Instagram, a $10,000 asset for which she got in at the “seed round.” (In reality, Reilly gave her one of the now-cult bags as a gift.)

Venus with her two cents on the Reilly bag haha. pic.twitter.com/4dSXZAGqhn

Opelka is the only professional tennis player with a gallery as a sponsor—and his tote marked the first time an art organization has been visible on the court.

The partnership derived from the two men’s shared passion for art and tennis. While Opelka is a dedicated collector, Van Laere played tennis professionally for two years after playing in college (“at a lower level,” the dealer clarifies). The only other art-collecting men’s tennis player to come to mind is, of course, John McEnroe. And the comparisons between the two Americans have already started, with McEnroe himself calling Opelka “a dangerous” player.

Under the terms of their arrangement, Van Laere sports a gallery patch on his shirt sleeve and uses the branded tote to carry necessary equipment (like shoes for third, fourth, and fifth sets, we’re told).

The gallery pays Opelka in exchange—Van Laere declined to state how much, but assured us it’s not at the level of a sportswear brand. Opelka and Van Laere “prefer to call it a partnership not a sponsorship,” the gallerist says, seeing it as an opportunity to elevate the arts through tennis. “It’s not about money, it’s about being creative in our collaboration and finding more opportunities to mix both worlds,” Van Laere explains.

Both men were scandalized by the pricey slap on the wrist. “Reilly was just in Toronto for the Open final. He brought it [the tote] in the French Open, everyone thought it was cool,” Van Laere recounts. “He didn’t have a problem. Only in the U.S. Open did he get fined.” (Opelka, for his part, groused on Twitter: “U.S. open ticket sales must be strugglin this year.”)

The art-tennis crew may have gotten the last laugh. Van Laere rallied some of the artists Opelka collects, who also happen to be tennis players themselves—Rinus Van de Velde and Friedrich Kunath—to toss in a bit of performance-protest.

Kunath, who traveled from L.A. to watch his friend play, turned the bags inside out and scribbled in marker, “UNAPPROVED.” Opelka debuted the modified version in his match against Lloyd Harris in the Round of 16. Sadly, Opelka is now out of the Open, but the pink bag will live on (and it’s probably already tripled in value).

BASEL CRAWLS BACK FROM THE BRINK 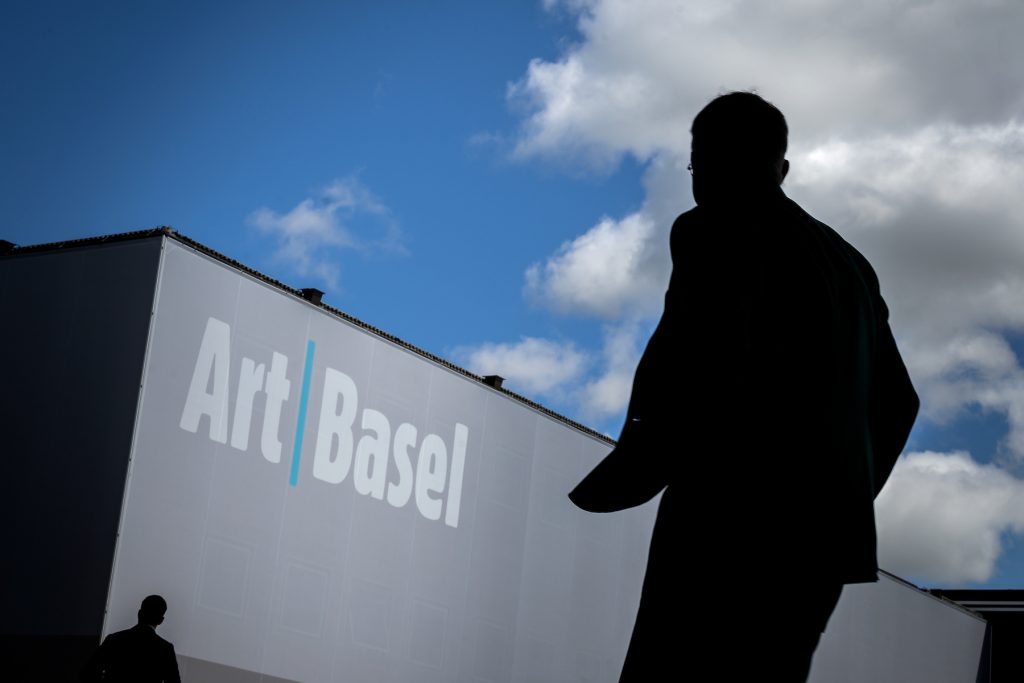 A visitor arrives at the 2019 edition of Art Basel, the last in-person version of the fair. (Photo by Fabrice Coffrini/AFP via Getty Images.)

While the flurry of fair activity descends upon New York as the Armory Show settles into its new home at the Jacob Javits Center and Independent sets up shop at Cipriani South Street, the buzz around town isn’t just about the revival of these fairs and how weird it is to see people from the top of the nose up. Instead, Basel is the word on everyone’s lips—and speculation about who’s going and who’s not has become a guessing game with deeper implications. Last weekend, a reliable tipster urgently told Wet Paint, “a mega-gallery is pulling out of Basel, expect the news to drop on Monday.”

Around the same time, a group of galleries—led by Lisson—sent a letter to Basel organizers asking that the show not go on. (The gallery did not immediately respond to a request for comment.)

We spent all weekend furiously texting the majors to get ahead of the news. A representative for Gagosian said, “We are packing and shipping works as we speak, so it would seem we are going.” A sales director for Hauser & Wirth responded, “We’re packed and have our hotel rooms booked, so yes I am definitely going.” A representative from Pace flat-out denied any rumor, and while David Zwirner’s official channels have yet to comment, an employee said, “I’m looking at a shipping list so if we aren’t going, that would be weird?”

We went further afield. With the news that Lévy Gorvy, Amalia Dayan, and Salon 94 are forming a conglomerate and pulling out of all fairs but those in Asia (all the better to reach newer, younger collectors), it would seem rather obvious that one gallery (or all three!) wouldn’t be attending. Last we checked, Europe isn’t Asia—but LGDR also doesn’t formally debut until next year. Salon’s Jeanne Greenberg, who apologized for being occupied with Rosh Hashanah dinner, said, “we’ve shipped the works, so we better be there!” while a rep for Lévy Gorvy assured us that their original Basel plans have not changed. Denials also came in from more than half a dozen other dealers.

In the end, Basel may have managed, by the skin of its teeth, to keep dealers in line with the announcement of a $1.6 million “Solidarity Fund” designed to help participants offset some of their potential losses after the fact (but only, of course, if they don’t pull out).

In a conversation with Wet Paint, Art Basel’s global director Marc Spiegler confirmed that more than a handful of galleries had the intention of calling it quits. But “every single gallery,” he said proudly, “is now confirmed. We met fears with facts and we stepped up in an uncertain moment to calm the market. That came from being in dialogue with our galleries, and the ones who were planning to cancel or had reservations about attending are now enthusiastic and on board.”

With only two weeks ’til the show goes up—and many artworks already in transit—the window for any gallery on the fence to play Humpty Dumpty is closing fast.

A screen shot of Cynthia Talmadge’s work on Platform.

***When word got out that work by in-demand artist Cynthia Talmadge, who has an impossibly long wait list at 56 Henry, had sold out within 20 minutes of going live on Platform, the David Zwirner-backed e-commerce initiative, it perplexed some buyers who logged onto the site the minute the batch went live, only to find them unavailable. Mystery solved: Wet Paint has learned that Zwirner provides participating galleries with VIP pre-sale codes so that preferred buyers can get in early. One dealer likened the arrangement to “an art fair where you pre-sell works” —which sure is all fine and dandy, except that Zwirner himself told the New York Times back in May, “We’re not sitting there and saying, ‘You get to buy it and you don’t.’ It’s first come, first served.” The gallery did not respond to a request for comment by press time.

*** Speaking of Platform, the art world’s hottest bachelor appears to be gallery scion (and Platform honcho) Lucas Zwirner—who was apparently dodging suitors at former Wet Paint scribe Nate Freeman’s recent wedding, with one reveler calling it “the groomsmen effect.” Another insider revealed that Lucas has been spotted multiple times a week at his family-backed restaurant Il Buco with “a different brunette” (the exception being recent dinner companion/ex Sienna Miller, who is blonde).

*** The gallery [On Approval], which has space in San Francisco‘s Minnesota Street Project gallery hub, is—appropriately for Silicon Valley—pivoting to an app. Founder Andrew McClintock, who also runs Ever Gold [Projects], has developed an online platform for “communal ownership” of contemporary art. Currently the app is in beta, and we hear they’re being particularly picky about which collectors they’re letting test out the concept.

*** In June, Wet Paint discovered that Mendes Wood is slated to open an upstate gallery in Germantown—turns out, they’re not going alone. They’re partnering with frequent collaborators Blum & Poe on a shared space a few doors down from the famed tavern Gaskins. 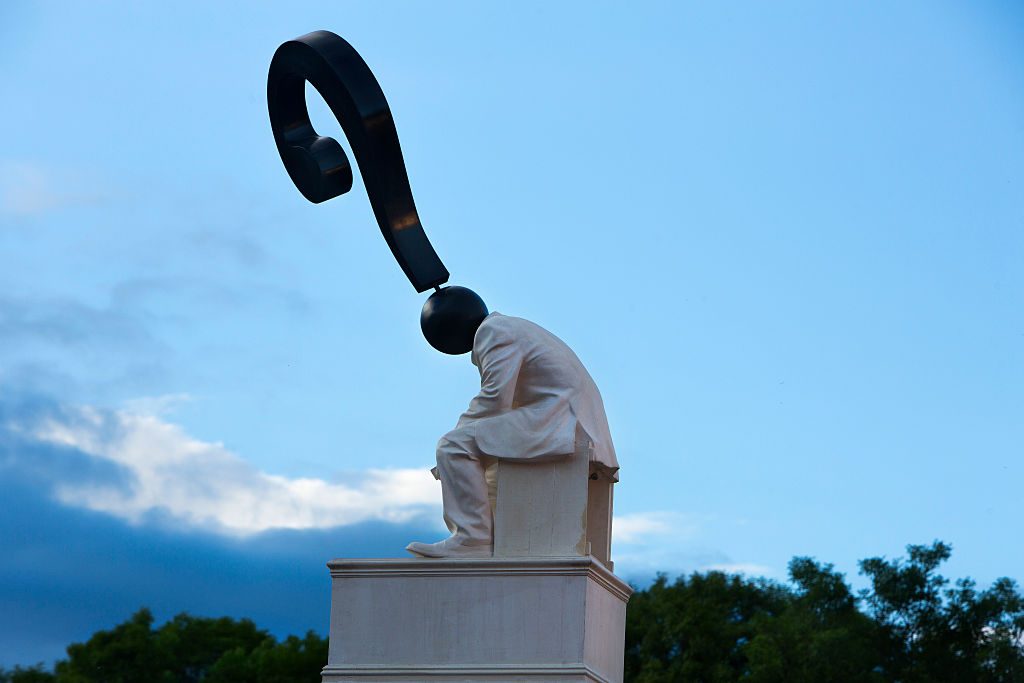 A sculpture by the artist Hugo Farmer at the Glastonbury Festival in the U.K. (Photo by Barry Lewis/In Pictures via Getty Images)

*** Which untouchable Minimalist master (who would’ve rejected that moniker) had a torrid affair with the country’s now-top art critic just back when they were getting their start? *** Which power dealer had a Rashid Johnson installed in their child’s New York University freshman dorm—which, according to a classmate, the spawn didn’t even like? *** Which 57th Street dealer has earned the nickname “Son of Sam” due in part to his father’s name, and also to his reputation for being rather terrifying to deal with? ***

and which
you were probably
hoping
I would read

Forgive me
they were overwhelming
so plentiful
and so bland