To Celebrate the Glass Ceiling Kamala Harris Shattered, This Artist Installed a Portrait of Her in Washington Made Entirely of Cracked Glass


Vice President Kamala Harris’s history-making election as the first female, Black, and Asian American to serve in our nation’s second-highest office has been immortalized in a new artwork.

Swiss artist Simon Berger’s sculpture, installed yesterday in front of the Lincoln Memorial in Washington, DC, by the National Women’s History Museum and the women’s leadership network Chief, is made from broken glass, symbolizing the shattering of the glass ceiling that prevents women from advancing to leadership positions.

“Representation matters, especially at the ballot box, and the inauguration of Kamala Harris as the first woman, and first woman of color, to serve as vice president of the United States is a landmark moment in American history,” said Holly Hotchner, the museum’s president and CEO, in a statement.

“Today’s progress is built on the legacy of the women who came before—the trailblazers, like Kamala, who raised their voices, marched for their rights, and ran for elected office; the women who cracked glass ceilings so that other women could shatter them,” Hotchner added.

Berger developed his unique artistic practice of glass shattering in 2016, when he started taking a hammer to layers of laminated glass to create cracks and fissures that, from a distance, create legible images.

He based his six-and-a-half-foot-tall portrait of Harris, titled Glass Ceiling Breaker, on a photograph by Celeste Sloman.

A short film of Berger at work on the piece, set to the sounds of Harris’s victory speech, honors some of the women who came before her to break other political barriers: the first female congresswoman, Shirley Chisholm; the first female senator, Carol Moseley Braun; secretaries of state Madeline Albright and Condoleezza Rice; and supreme court justices Sandra Day O’Conner and Ruth Bader Ginsburg. 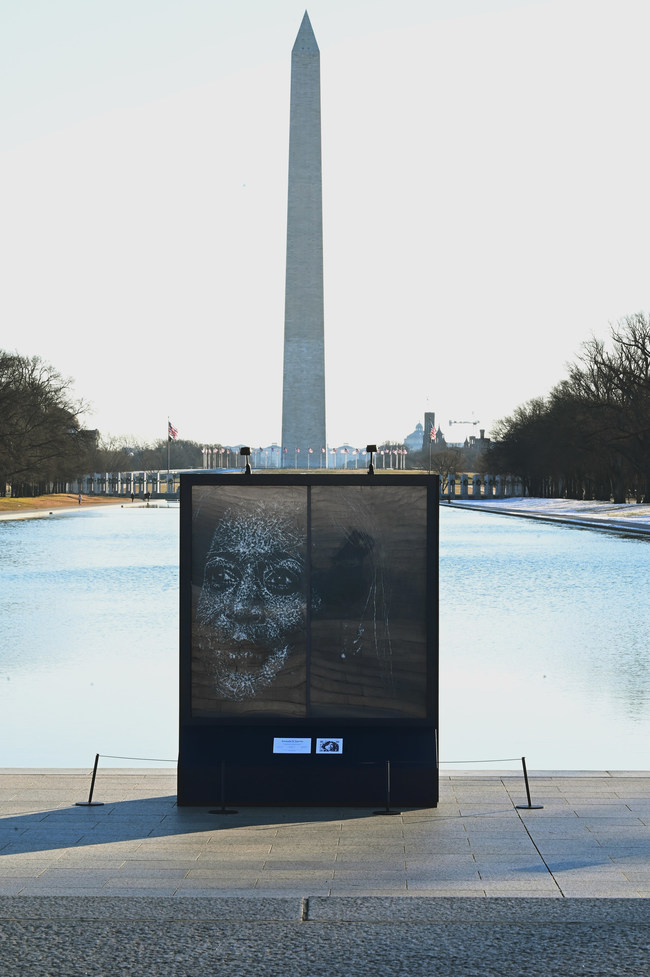 In her vice-president-elect acceptance speech, Harris thanked “the generations of women… who throughout our nation’s history have paved the way for this moment tonight.… And I stand on their shoulders.”

The museum enlisted creative agency BBH New York and production company m ss ng p eces to stage the installation of the work, which has been displayed against the stunning backdrop of the National Mall’s reflecting pool and the Washington Monument. It is on view through tomorrow evening.