The Market Is Coming for Museums’ Art, and 7 Other Takeaways From a Hot-Button Conference on Deaccessioning


American museums are in a bind. Budget shortfalls during the pandemic have led to existential threats, while at the same time activists have ramped up calls for museums to correct long-standing racial inequities, which necessitates more funding—all of which has led to a heated debate among professionals about how institutions should manage their finances.

As museums struggle to find new ways to raise money amid plummeting revenue streams, deaccessioning has come the the fore as a controversial solution. At a conference organized last week by Syracuse University, “Deaccessioning After 2020,” brought together directors, curators, scholars, and other experts to discuss policies surrounding the way museums sell objects from their collections.

While museums routinely sell works, how they can use the resulting funds are determined by two leading industry organizations, the Association of Art Museum Directors (AAMD) and the American Alliance of Museums (AAM). (“Deaccessioning” includes sales along with giving items away and repatriating them to their countries of origin or other rightful owners.)

While the AAMD’s guidelines have restricted museums’ use of proceeds from sales to purchasing other objects, AAM’s policies have long allowed institutions to use those funds for “direct care” of their collections. But to help museums face the financial crises caused by the pandemic, AAMD has opened a two-year window during which its members may use such funds for direct care.

Institutions like the Brooklyn Museum quickly moved to take advantage of the exception. The Metropolitan Museum of Art, which sits on an endowment of some $3.3 billion, revealed that it, too, would take advantage of the loosening regulations, causing considerable blowback. Thousands signed a petition calling on board members to write checks to meet the museum’s $150 million budget shortfall. Some professionals warned of a slippery slope that might result in boards being less willing to fund institutions that could simply sell objects, and of a threat to museums’ tax-exempt status.

Furthermore, “direct care” has never been strictly defined. When the Baltimore Museum of Art recently penned an expansive definition of the term as it planned to sell several masterworks to raise $65 million to meet ambitious diversity, equity, accessibility, and inclusion goals, the AAMD balked. The museum withdrew the works from auction at the last moment.

Speakers at the conference, which was held on Zoom, included the Museum of Modern Art director Glenn Lowry, the Baltimore Museum of Art director Christopher Bedford, scholar Glenn Adamson, lawyers for the Berkshire Museum, as well as government officials.

Here are eight key insights on the future of museums put forth by the participants. 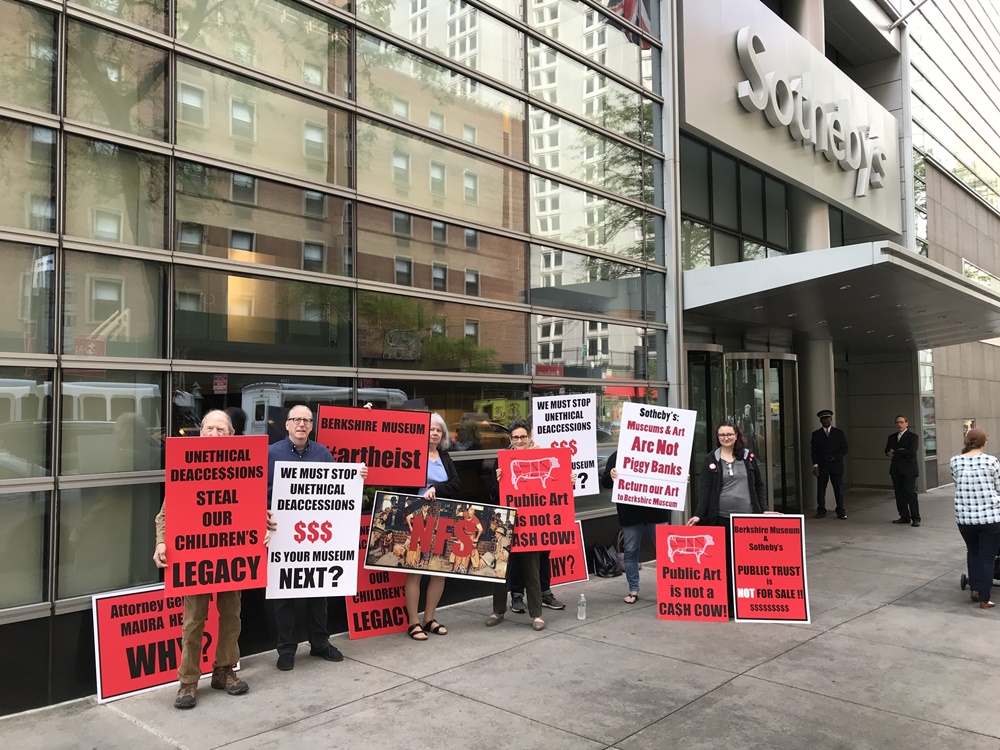 Protesters outside Sotheby’s ahead of an American art sale that included works being deaccessioned from the Berkshire Museum. Image courtesy of Save the Art—Save the Museum

1. Museums are not going to “sell” their way out of their financial problems. Not during the pandemic—and not after.

During a panel on legal issues and the role of the courts, Nicholas O’Donnell, partner at Sullivan and Worcester’s art and museum law practice group, sounded a warning bell. (O’Donnell was one of the lawyers arguing against the sale of works from the holdings of the Berkshire Museum in 2017.) If a meaningful percentage of museums face the inability to continue, he said, selling art isn’t going to help them stay open. (A survey by AAM conducted at the beginning of the pandemic found that a third of museums faced the real possibility of closure.)

2. That’s because museums have grown way too large without regard to future costs.

In the opening keynote, National Gallery of Art director Kaywin Feldman sounded warning bells of her own. Museums’ governing philosophy in the 20th century, she said, was growth. Collections grew and grew such that today, lack of storage space is a crisis. Buildings grew to fill museums’ properties without regard to future costs to maintain the physical plant. Galleries and storage spaces are overflowing, she said, and yet the industry keeps talking about growth.

The AAM added direct care to its code of ethics in 1994, but left it to museums and their boards to define the term. And yet, in the years since, the industry hasn’t outlined it with much clarity.

In a recent vote among AAMD membership, museum directors opted not to even have any further discussion on the subject. Museum directors were too afraid to even talk about this hot-button issue, the Brooklyn Museum’s Anne Pasternak said. But they need greater guidance from the AAMD. Museums are too diverse for a one-size-fits-all solution, and yet the current situation, in which boards just make their own decisions, isn’t ideal.

Pasternak added that museums need the AAMD to develop clear guidelines because direct care could be a very real part of how museums get through the current crisis. 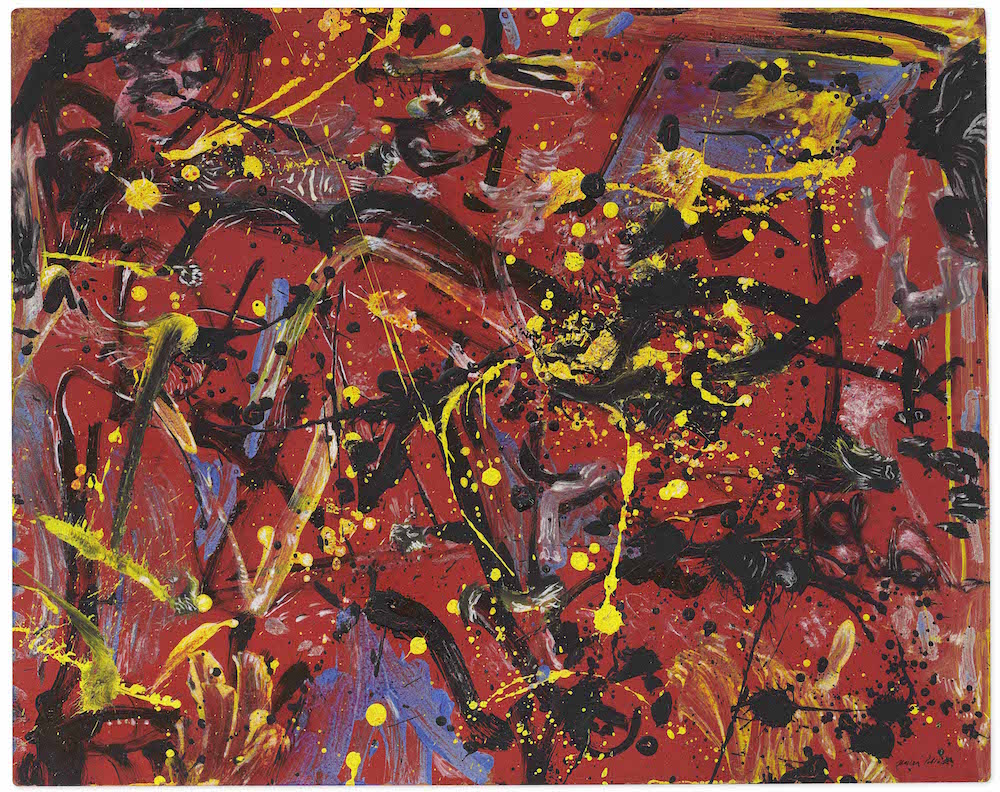 4. Boards aren’t going to save museums in every emergency. They can’t, and maybe it shouldn’t be their job.

If those who oppose deaccessioning expect super-wealthy boards to come to the rescue, they could be waiting a long time, said the directors and board chairs on a panel about regional museums tasked with “making difficult decisions,” including the Berkshire Museum and the Everson Museum of Art, in Syracuse, which recently sold a Jackson Pollock work to fund future acquisitions.

“Boards are not banks,” Everson board chair Jessica Arb Danial said. “They are fiduciaries.” What’s more, the Everson doesn’t have a single billionaire on its board, she said. (Though if you are a billionaire in Syracuse, she added, “I will find you.”)

On her panel, too, Pasternak called the assumption that her board could simply write checks to cover pandemic shortfalls “perplexing.”

Likewise, Mark Gold, a partner at Smith Green and Gold, in Massachusetts, who was counsel to the Berkshire Museum, called it “offensive” to assume that boards are stocked with super-wealthy members, saying that he works with institutions whose boards include local business owners and school teachers.

5. Museums must get creative about cutting costs.

The Dallas Museum of Art recently mounted a Juan Gris exhibition using many loans, director Agustín Arteaga said. Whereas big-ticket items on loan are usually lovingly cared for every step of the way by couriers, the museum managed this time to cut costs without using a single one. (As Kate Brown recently wrote, the organizers of a Rembrandt show in Germany pulled off the same feat.)

Joe Thompson, former director of Mass MoCA, piped in, saying that those loans are typically triple insured, at “absurd” rates, “with no balancing of actual risks.”

6. Some museums will go out of business, and that’s just the way it goes.

On a panel devoted to “the impermanence of museums,” Brown University professor Steven Lubar pointed out that his institution once had a museum, the Jenks Museum of Natural History and Anthropology, that simply went the way of the dodo when the school’s priorities changed. Many museums have closed, said Lubar; we just don’t remember them.

7. The market is coming for museums’ art.

Lawyer Nicholas O’Donnell’s phone started ringing as soon as the AAMD’s policy change was announced, he said. The market will find efficient ways to source art to sell, he posited, saying that “collectors are coming full force” for museums’ collections.

8. And when it does, expect more crises, and more online rage.

While museums may collect with relative freedom, independent curator and writer Glenn Adamson pointed out that they are subjected to intense scrutiny when selling they sell, and the headlines bear that out.

When the market comes for their art, can their boards be trusted to do due diligence and defend every sale? That’s going to be “the gorilla in the room,” said O’Donnell.

Velásquez, on her panel, appealed for more propositions for solutions than just criticism. The current crisis, she said, showcases museums’ most pressing needs. Those in the hot seat need great ideas and empathy.

But Pasternak was defiant. Let bloggers criticize, she said.