The Manhattan District Attorney Has Returned 27 Looted Antiquities Worth a Combined $3.8 Million to Cambodia


The United States returned nearly 30 antiquities worth a combined $3.8 million to Cambodia this week. The objects, which include several Angkorian Buddhist statues and Hindu statues, were seized from two New York art dealers who are alleged to have separately used their galleries to offload smuggled and stolen antiquities.

“The repatriation of these 27 stunning relics to the people of Cambodia restores an important link between the nation’s classical Angkor era and its modern customs and beliefs that, for far too long, was disrupted by the greed of stolen antiquities traffickers,” New York District Attorney Cy Vance said in a statement.

The works were handed over in an official repatriation ceremony on Friday attended by Vance, the Cambodian Minister of Culture and Fine Arts Phoeurng Sackona, and other officials including from the U.S. Department of Homeland Security. 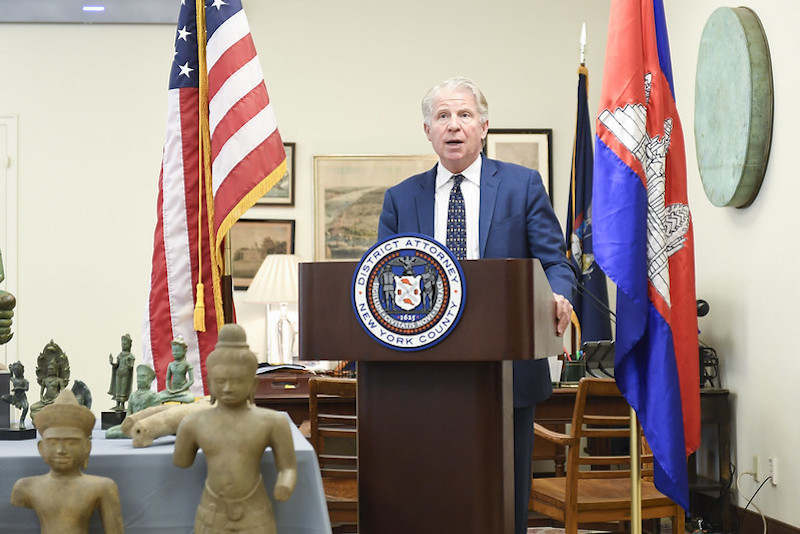 The long-running investigation into Kapoor and his co-conspirators accuses them of illegal looting, exportation, and sale of ancient art from Sri Lanka, India, Pakistan, Afghanistan, Cambodia, Thailand, Nepal, Indonesia, Myanmar, and other nations.

Kapoor and the other defendants had a pattern of smuggling looted antiquities through his Madison Avenue gallery, Art of the Past, according to authorities. Over the course of nine years, they tracked and recovered more than 2,500 objects that had passed through the dealership with an estimated value of more than $143 million, according to a statement.

The D.A. first issued an arrest warrant for Kapoor in 2012. In July 2020, the office filed extradition paperwork for the dealer, who is currently in prison in India pending the completion of his ongoing trial on smuggling grounds in Tamil Nadu. “We continue to urge Indian authorities to expedite the extradition,” a spokesperson for the D.A.’s office said.

Wiener, meanwhile, was charged in December 2016 with criminal possession of stolen property and conspiracy. According to the D.A., between at least 1999 and 2016, she allegedly used her eponymous New York gallery to smuggle, sell, and launder millions of dollars worth of antiquities from many of the same countries outlined in the charges against Kapoor.

Both dealers face up to 25 years in prison.

“The win-win policy of the Royal Government that has brought peace to Cambodia is a strong foundation for the preservation of the nation’s culture,” said the Cambodian arts minister Phoeurng Sackona in a statement. He added that even amid the challenges of the pandemic, Cambodia “remains committed to finding and bringing back our ancestors’ souls that departed their motherland over a number of years, including during a period of war.”