Prince Philip, the Duke of Edinburgh and husband of Queen Elizabeth, died today at home at Windsor Castle, at the age of 99. Though best known as a sportsman, throughout his life the Prince also possessed an abiding appreciation for the arts, both as a patron and a hobbyist artist.

The Prince, who married Queen Elizabeth II in 1947, privately enjoyed oil painting, creating numerous portraits and landscapes over the decades, some of which were kept in his private collection, others of which are held in the Royal Collection Trust. 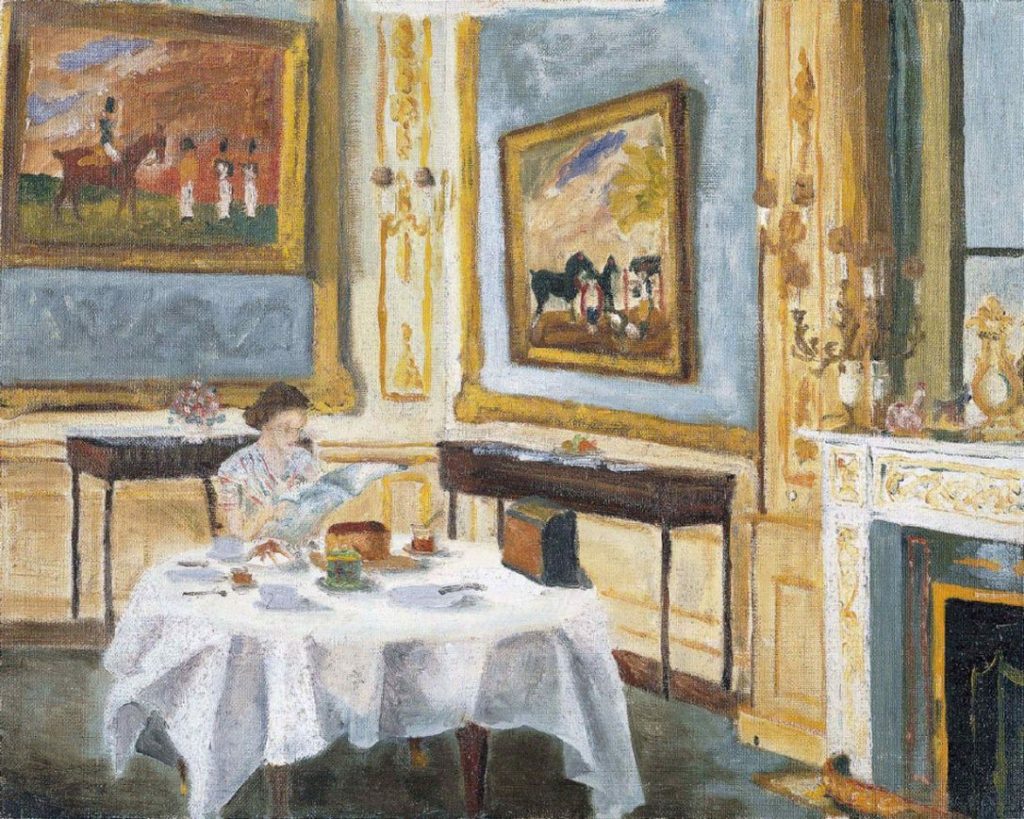 Prince Philip, Duke of Edinburgh, The Queen at Breakfast (1965). Courtesy of the Royal Collection Trust.

Perhaps his best-known painting, The Queen at Breakfast, from 1965, is a strikingly affectionate and informal portrait of the queen as she enjoys her morning meal and reads a newspaper in the dining room at Windsor Castle. The intimate depiction of the monarch was featured in the book The Royal Portrait: Image and Impact, published in 2010, and offers a rare private glimpse into the Queen’s daily life.

The prince’s long friendship with the English artist Edward Seago was deeply formative, both to his own style and his appreciation of the arts. The Royal Collection Trust noted of the prince’s painting Duart Castle from the Sound of Mull, that “[t]he atmosphere and light show the influence of his friend, the artist Edward Seago.” 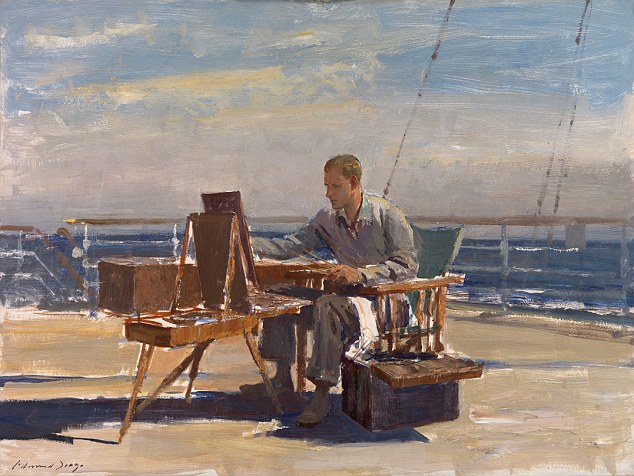 Edward Seago’s Portrait of the Duke of Edinburgh made during the Prince’s world tour. Courtesy of the Royal Collection Trust.

In 1956, Prince Philip invited Seago on a tour of the Antarctic and a number of the artist’s paintings from the journey were subsequently displayed at Balmoral Castle in Scotland. (The late Queen Mother was also an avid collector of Seago’s works).

During the Duke of Edinburgh’s world tour, from 1956 to 1957, the prince would paint a portrait of Seago at his easel on board the Royal Yacht Britannia. Seago, in turn, made a portrait of the prince at work with his oil paints. The pair of paintings were shown together in the 2016 exhibition “Portrait of The Artist” at Buckingham Palace. 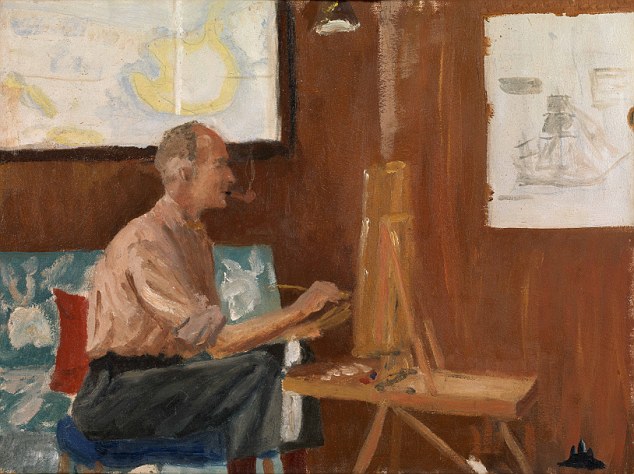 Prince Philip, Duke of Edinburgh, Portrait of the Artist (1956-57). Courtesy of the Royal Collection Trust.

The Duke of Edinburgh’s interests in the arts extended well beyond his own pursuits. He was a devoted patron, acquiring works by contemporary artists for the Royal Collection Trust, notably by British and Commonwealth artists including Barbara Hepworth, Mary Fedden, and Sidney Nolan, as well as ceramics by Austrian artist Lucie Rie. He was also known for his collection of political cartoons.

At times, his interest in art and design was entwined with his official position. From 1952 to 1999, he was the president of the Royal Mint Advisory Committee, where he helped oversee the designs for coins, seals, and medals, and was instrumental in the launch of a newly designed coinage released in 1952, produced to mark the beginning of the queen’s reign. 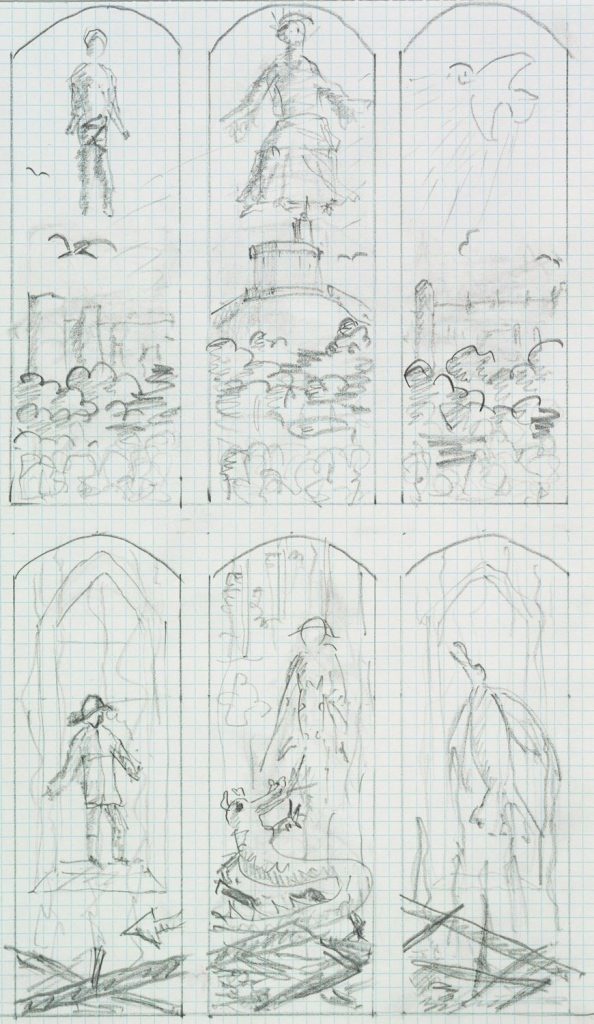 Prince Philip’s sketches for the stained glass windows for a private chapel at Windsor Castle. Courtesy of the Royal Collection Trust.

In 1992, following a fire at Windsor Castle, the Prince assumed the role of chairman of its restoration committee. According to the Royal Collection Trust, he was closely involved both in the restoration process of the castle as well as the design of the stained glass windows for a new chapel at Windsor Castle, making sketches that he shared with Joseph Nuttgens, the stained glass artist who designed the windows, which were installed in the chapel in 1997.

Prince Philip, too, was the subject of portraits by leading artists and photographers of the 20th century, including Thomas Struth, Cecil Beaton, and Lord Snowdon, the husband of Princess Margaret. In 2017, the Duke of Edinburgh marked his retirement from public engagements with a portrait painted by Austrian artist Ralph Heimans.

“As patron and collector, as well as designer and artist, the Duke of Edinburgh held a deep personal interest in British design, architecture, and engineering, championing creativity and industry throughout his lifetime,” wrote Tristram Hunt, director of the V&A in a remembrance.