YOU CAN GAGO YOUR OWN WEYANT

If I had a dollar for every rumor I’ve heard about Anna Weyant and Larry Gagosian that isn’t true, well, let’s just say drinks on me next time.

In the year-and-a-halfish that their relationship has been semi-public, there’ve been rumors that they broke up and got back together ad infinitum—rumors that, if I were to put them into writing, would surely result in me getting sued and never being able to afford a round of drinks again—plus, of course, endless fluff from a circus of characters trying to take credit for the power-couple’s meet-cute.

Most recently, the buzz has been that the two broke up. I’ve heard this from a multitude of sources. One such source told me the breakup happened the day after Weyant’s first show at Gagosian opened uptown last November—“She got her bag, then she got out!” that source told me. A since-scrapped Page Six report had gathered different intel, concluding that the breakup had happened at some point in December. Apparently the rumored split has been quite the conversation topic du jour among the upper echelons: Mary Boone was overheard dishing about the rumored split, I heard about at least one prominent dealer with plans to ask Weyant out on a date, and apparently it even got a mention at a recent internal meeting among Jack Shainman’s staff—the professional impetus for which remains unclear. The takeaway, however, is certain: people sure love to pretend like they have insider knowledge about the art world’s most talked-about couple.

I hate to burst anyone’s bubble, but you’re, um, all incorrect. According to sources extremely close to the couple, Gagoyant is still holding firm in the new year. In fact, the two even rang in 2023 together at Gagosian’s beach house in the 1%-er enclave of Saint Barts, where he’s holidayed before.

A representative speaking on behalf of the gallery declined to comment on their boss’s current relationship status, shockingly, and Weyant didn’t immediately respond to a request for comment. So, I can really only confirm it up to the minute that my sources close to them last spoke to me. As it stands now, Weyant remains listed on the Gagosian roster, and the winds haven’t changed direction in New York City, which I imagine they would once that partnership terminates. Until then, the art world’s buzziest merger remains status quo, do not be alarmed. 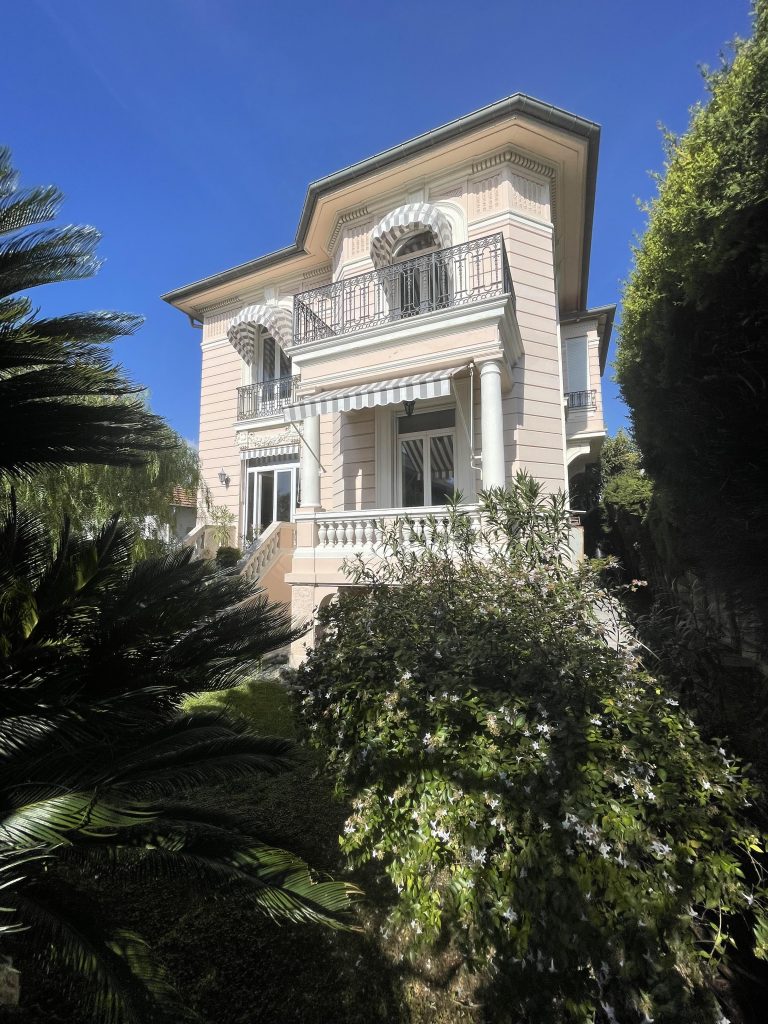 It’s been a while since we heard from curator Jens Hoffmann. The curator has been pretty low-key since he was removed from his role as a curator of the Jewish Museum in 2017 following an investigation over allegations of sexual harassment leveled against him by former colleagues. As it turns out, though, Hoffmann has still been fairly active in the art world, penning an essay on Anna Weyant (I mentioned her again! Drink!) and helping start up a gallery in Bogota, Columbia. Most compelling to me, however is his new appointment-only gallery in Nice, France, called Hoffmann+Maler+Wallenberg. Why’s that? Well, because his other two partners in the gallery don’t exist.

“Well, really they’re my spiritual co-pilots,” Hoffmann told me over the phone of his fictitious  co-founders, Gustaf Maler (Like the composer? “Nope”) and Esther Wallenberg.

“It was a bit of a joke. It’s like, say, Hauser & Wirth or Sprüth Magers. When there’s two names involved with the gallery, people like the sound of that,” he explained further. “There’s more weight to it.” So, presumably, to add that much more oomph to his gallery name he added not one but two cosmetic surnames. Adopting a fake persona as a business strategy isn’t such a distant idea to Hoffmann either, as his partner Emily Sundblad is a director of Reena Spaulings, the famous pseudonymous artist-run-gallery. “It’s in a similar vein to that, yeah,” Hoffmann said.

In the year and a half since the space opened in France, the gallery has opened an office in Greenwich Village, and there are apparently plans to open up shop in Stockholm and Palm Springs. Thus, if the “grow or go” valuation of success means anything, Hoffmann’s deceptive little plan seems to be working. He explained, “It’s in its early phases so I’m waiting to see where it goes. I’m just happy to set this up and figure out a program that makes sense. We’re in a beginning phase, an experimental phase.” 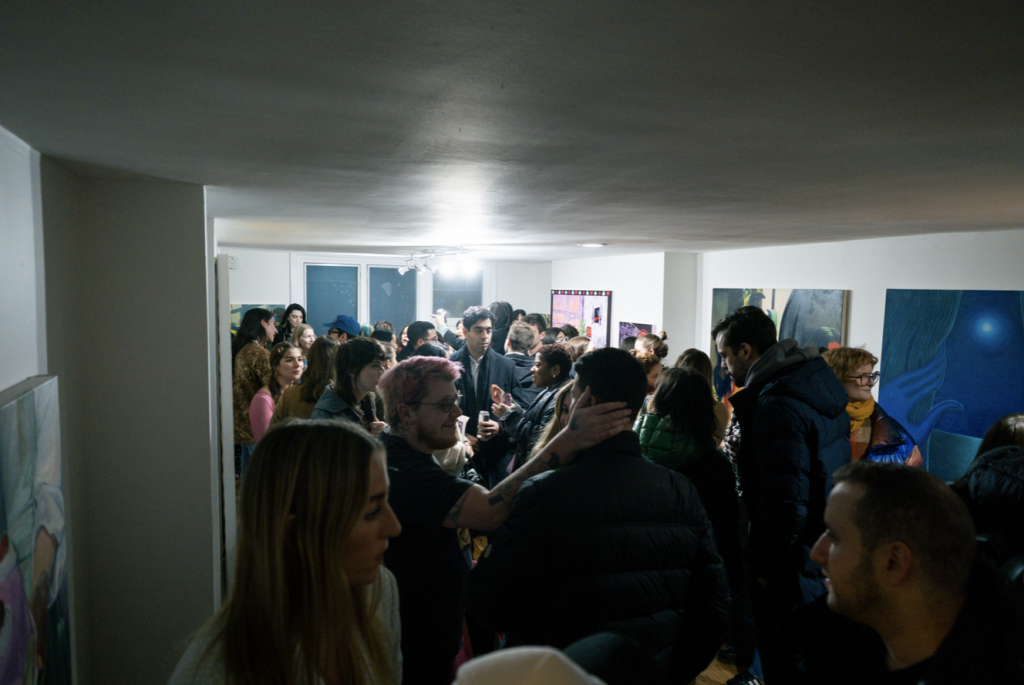 Opening night of Tchotchke’s space in Brooklyn. Courtesy of the gallery.

That he formerly digital Tchotchke Gallery opened its first ever physical space in East Williamsburg at 311 Graham Avenue this week… That when Sam Orlofsky was still at Gagosian, apparently he had a special mandate that no female assistant of his could be above a size six… That Jessica Silverman has picked up representation of painter Chelsea Ryoko Wong… That Ruttkowski 68, which has spaces in Paris and Dusseldorf, has opened its third location in New York City in Cortland Alley… That a painting by up-and-coming artist Sally J. Han was acquired by the Institute of Contemporary Art Miami… That Lena Dunham mentioned in her Perfectly Imperfect essay that Lisa Yuskavage is quite the SoulCycle maven… that, speaking of art world nepo-babies, Max Werner has left his father Michael Werner’s eponymous gallery to work with TOTAH… that the Whitney has acquired one of Hugh Hayden’s fabulous basketball-hoop sculptures, Fee-Fi-Fo-Fum (2021)… That Lehmann Maupin has added Ken Tan as the director of their Singapore space…

It’s been a while since I’ve seen you folks. To ring in a New Year of Wet Paint, I ask you: Who in the art world is the most addicted to TikTok? Email your response to [email protected]


Rubells Make a Move to D.C. – The taste-making Rubell family of art collectors are expanding their private museum to Washington D.C.

Take the Money and Run – An artist received $84,000 from a Danish museum to make new work, and instead he took off with the cash and called it conceptual art.

Former Fashion Designer Gets Gallery Rep – The long-acclaimed designer Martin Margiela has become a bona fide artist, and will now show with Zero X gallery at FIAC in Paris.

A New Class of ‘Geniuses’ – The MacArthur “Genius” grants were announced this week, with painter Jordan Casteel, curator Nicole R. Fleetwood, and artist Daniel Lind-Ramos among the honorees.

Snoop Dogg Goes On an Art Shopping Spree – The rapper bought $17 million worth of crypto art under the amusing moniker “Cozomo de Midici.”

Prado’s Makeover Approved – Spain has given the greenlight for a long-awaited $42 million expansion of the famous Madrid museum.

Float Like a Butterfly, Paint Like Picasso – A cache of Muhammad Ali’s original artwork is hitting the auction block, where it’s expected to set a new record.

The Restoration of the Pieta – A museum in Italy is conserving Michelangelo’s famous macabre sculpture, and letting the public see into the process.

A Monumentally Bad Track Record – A new report from the Philadelphia nonprofit Monument Lab revealed that 42 of the most-memorialized figures are white men, many of them slave owners.

Will Hong Kong Artists Flee? – The National Security Law in Hong Kong continues to exert pressure, causing many to fear an artistic exodus.

The National Gallery’s Rubens Gaffe – Turns out that the London museum’s prized painting by Peter Paul Rubens is a fake, at least according to new A.I. resarch.

Serial Thief Sentenced – An art thief who made off with $20 million of Van Gogh and Frans Hals works was sentenced to eight years in prison.


Get Intelligent! – The fall 2021 edition of the Midnight Publishing Group Intelligence Report is here! With new technology trends, K-Pop collecting habits, plus the best party galleries, it is a must-read.

Libras Unite – Art meets astrology in our new series helmed by Katie White, and this month it’s dedicated to the season of the seventh sign.

What’s in a Hat – A bicorn hat donned by the infamously diminutive emperor Napoleon Bonaparte just fetched a whopping $1.4 million at Sotheby’s this week.

A Benin Bronze Barter – A guild of Nigerian artists has proposed a new way to get their native Benin Bronzes back from the U.K: offering their own works to the U.K. in exchange.

Tracey Emin Comes Home – After defeating cancer, the British artist has returned to her hometown to cement her legacy and build a museum.

Basel Is Back – Despite scores of setbacks, Art Basel’s flagship fair in Switzerland was in full swing this year, boding well for the rest of the year’s market calendar.

Frida Portrait Could Break Records – A Frida Kahlo self-portrait estimated at $30 million could smash records for a female artist when it comes to auction at Sotheby’s.

Longtime Gardner Heist Suspect Dead at 85 – Bobby Gentile, long suspected by the FBI of orchestrating the notorious museum robbery in Boston, has died—perhaps taking the truth with him to his grave.

NFT Exec Nabbed for Insider Trading – An executive at OpenSea was busted for insider trading, and now has stepped down from his role.

The Met’s Big Sell-Off  – Taking advantage of a pandemic-era loophole, the museum is deaccessioning seven figures worth of photos and prints to fill a budget shortfall.


The Met Meets American Fashion – The long-awaited Met Gala took place in September this year, and we’ve got all the celeb-art lookalikes from the red carpet.

Art History Prof Makes Mega Discovery – An art history professor visiting a church in Westchester spotted a canvas that is now being hailed as a rare Italian Baroque painting.

A Triumph at the Arc de Triomphe – The Parisian landmark has been swathed in fabric, fulfilling the posthumous dream of artists Christo and Jeanne-Claude.

Germany Gives Aid – As part of a $35 million aid package, cultural institutions will now get help in recovering from the summer’s historic floods.

White Male for Sale at Christie’s – Artist Dread Scott is selling video art as an NFT depicting a white man on a slave auction block.

Stonehenge Gets a Makeover – For the first time in decades, Stonehenge will undergo a major restoration of toppled and cracked stones.

Outcry Squashes Indigenous Women Statue – Artist Pedro Reyes has stepped away from a project to replace a Christopher Columbus statue with one of Indigenous Women after activists said a woman should have the job.

You Can Buy a $3 Million Avocado Sculpture – An artist is selling a gilded sculpture of avocado toast, a symbol of the millennial lifestyle, for $2.9 million.

Beeple Gets the Immersive Art Treatment – Beeple’s $69 million NFT artwork is set to star in an immersive experience—with a whopping $150 entrance fee.

History Sold to the Highest Bidder – An Osage cave containing prehistoric art was sold for $2.2 million at auction, in a “heartbreaking” act.

Basel’s Big Fund – In an effort to quell nerves ahead of its Swiss edition, Art Basel created a “solidarity fund” as a safety net.

Twenty Years On – On this week’s episode of the Art Angle, four artists who had residencies in the Twin Towers reflect on how 9/11 shaped their art and lives.

A Magical Armory Experience – At this year’s fair, a witch channeling the spirit of Hilma af Klint is reading tarot cards.

Iron Age Discovery – A rookie metal detectorist literally struck gold, and the stunning trove is now on view at a Danish museum.

Removing Robert E. Lee – The largest Confederate statue in Richmond, Virginia, has been dismantled and removed from sight, marking a milestone for the country.

Bannon Ousted From Italy – At long last, Steve Bannon’s far-right school has been evicted from the 800-year-old monastery it inhabited.

Another Art Fair Bites the Dust – Paris’s local Salon Galeristes called off its event for October, even as some larger fairs barrel ahead.

Hedge Fund Titan Trumps Turkey – A judge ruled that businessman Michael Steinhardt, and not the nation of Turkey, owns an ancient Stargazer idol.