Ghanaian artist El Anatsui creates monumental assemblage sculptures woven from colorful, shiny objects, creating tactile curtains that seem to breathe on their own. The works sell routinely for more than one million dollars each at auction, but their beginnings are humble.

The works may be made from pieces of wood, metal, ceramic, and—most often—bottle caps, but they are not rigid at all. In fact, Anatsui says “as a matter of principle” the works don’t come with installation instructions: “since they are so free and so loose and so flexible, it would be difficult to have a specific format for any one of them at any time.”

The artist now lives in Nigeria. He employs local studio assistants from his neighborhood to create an environment of camaraderie and community. 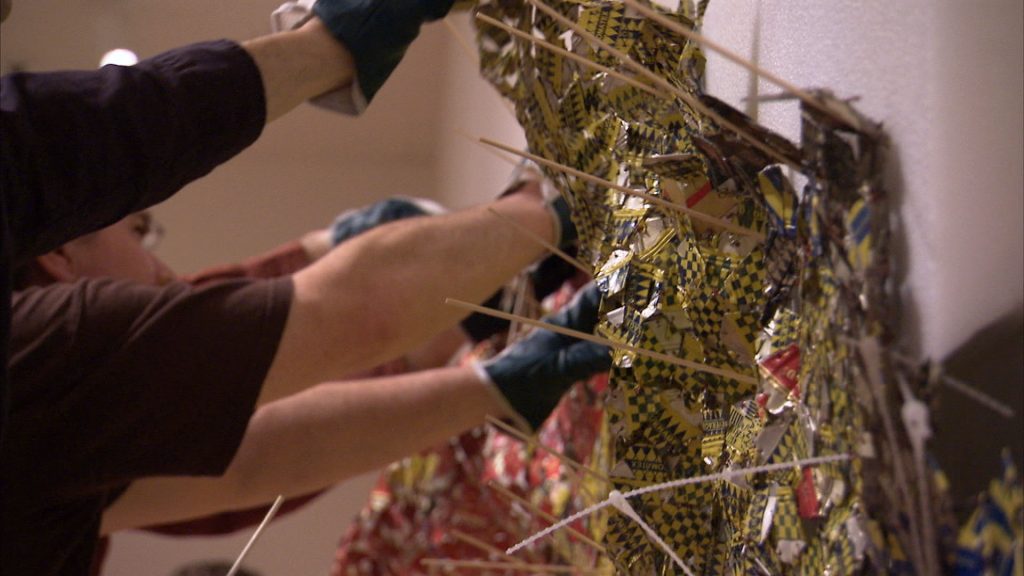 In an exclusive interview with Art21 filmed back in 2012 as part of the Art in the Twenty-First Century series, Anatsui explained why he uses bottle caps from discarded liquor bottles as such a primary medium. “How did liquor come into my culture and what does it mean?” he asks in the film, before describing the system of European traders who descended upon Africa, ultimately trading drinks for slaves who were brought to America to “grow more cotton and sugar cane to make more drink”—a continuous a cycle of trauma and colonization.

Another reason the artist was drawn to the caps is because an accumulation of the colorful, shiny baubles appears to replicate the popular kente cloth fabric of Ghana, though he adds that this provided its own difficulty because viewers began to look at the works as textiles, an art form that is often derided and not appreciated as fine art.

The artist is adamant that his practice shouldn’t be considered a form of recycling, because he says it doesn’t pertain to the industrial process. Instead, the process is more akin to reincarnation. “I don’t, for instance, return the bottle caps back as mere bottle caps,” telling Art21. “They are given a new life and I make them not objects that do something utilitarian, but objects of contemplation.”

Right now through November 14, El Anatsui’s work is on view at the Conciergerie in Paris in a site specific exhibition curated by  N’Goné Fall, general commissioner of the Africa2020 Season at the institution. Metal assemblages are installed surrounding the Hallway of Men-at-Arms in a winding route that alludes to the Seine, tracing a path through the medieval architecture of the city and its myriad cultural influences.

“The rivers flow, they do change their course,” the artist tells Art21, “And I think my work has principally been about change and non-fixity of things, the fact that things are there and they have to grow old and change and do all kinds of things.” Laughing he insists, “It’s not because I’m old now!”

Watch the video, which originally appeared as part of Art21’s Art in the Twenty-First Century series, below. “El Anatsui” is on view at the Conciergerie through November 14, 2021. 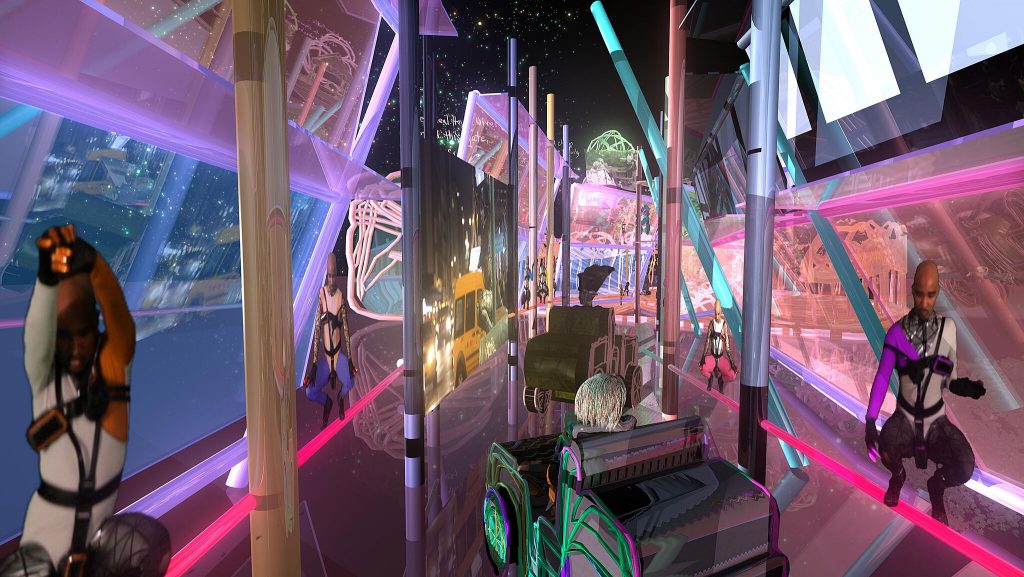 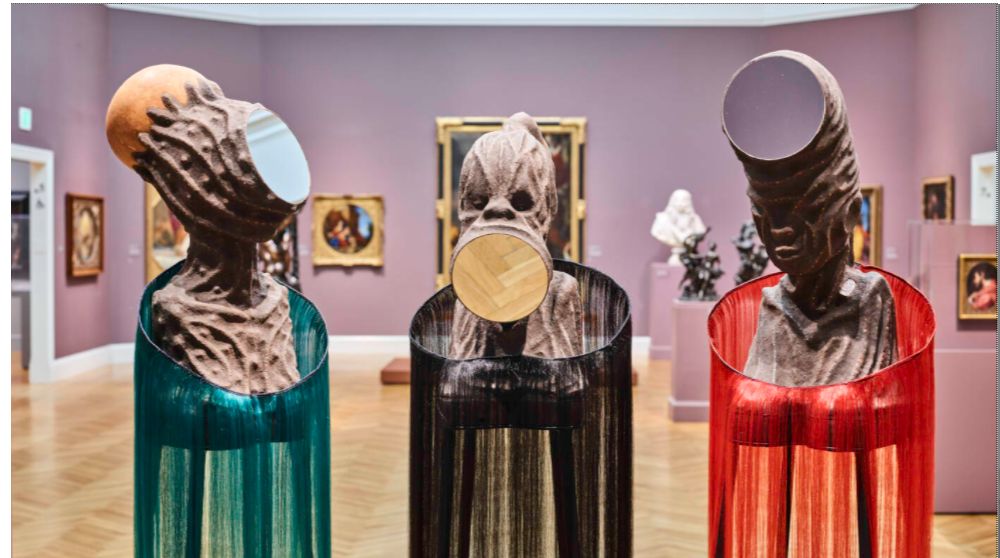 
The Canadian-born sculptor David Altmejd is a master of world-building. His large-scale installations and intimately scaled sculptures are like Russian nesting dolls of stories and materials, with layers upon layers of ornamentation that each have distinct meaning.

In an exclusive interview with Art21 filmed in 2013, the artist described his obsession with crafting heads out of leftover materials from his larger works.

At David Kordansky Gallery in Los Angeles, a show of new sculptures by Altmejd titled “The Enlightenment of the Witch” explores and how spirituality is expressed in material form. In the works on view, disembodied heads are set atop plinths throughout the gallery, becoming more fractured as the show progresses.

Many of the works have piercing eyes that uncannily stare out from lumpy clay faces, as if they’re possessed.

Watch the video, which originally appeared as part of Art21’s Extended Play series, below. “David Altmejd: The Enlightenment of the Witch” it on view at David Kordansky Gallery through July 2, 2021.


Since the mid-1980s, Chinese artist Ding Yi has crafted a distinctive visual language centered around crosses and grids. His often colorful abstractions consider the rise of Shanghai as a global metropolis and the radiance of the city’s neon lights.

The paintings represent an important new development for Ding: In order to create them, the artist layered colors of paint and then cut intricate dot-like crevices into the wood with a fine blade. The resulting images give the impression of shifting, glistening lights in shades of vibrant vermilion, magenta, lime green, and acid yellow. 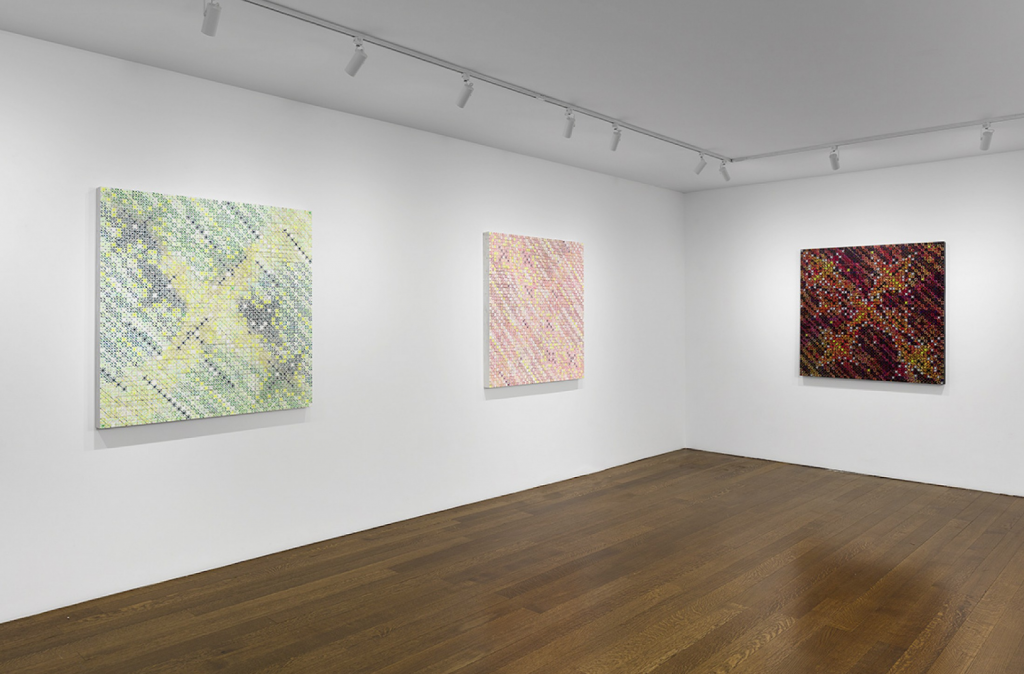 In conjunction with the new exhibition, the artist sat with curator Alexandra Munroe for an interview. “There are systems of thought and perspective that can shake our idea of a monolithic culture, and Ding Yi’s work is critical to this conversation. It has an insight that is unique, a sublime space and an emotion beneath the abstraction,” Munroe notes.

The discussion between artist and curator is wide-ranging. They talk about the changing role of Chinese art in the global sphere, the thirty-five years he’s worked on “Appearances of Crosses,” and why his approach to painting is similar to the board game Go.

Watch the interview between Ding and Munroe below.