These days, aisles of fresh groceries are a savory equivalent to all of Vivaldi’s Four Seasons concerti. No matter the time of the year, you’ll find asparagus or kale beaming alongside strawberries and apricots. But it is neither harmonious, nor in keeping with nature. In fact, it makes no sense at all.

Food and its disruptions, histories, and shifts are at the core of the artistic practice of London-based duo Cooking Sections. For Daniel Fernández Pascual and Alon Schwabe, what we eat is a lens through which they see (and try to affect) pressing societal issues.

“Food is often seen as a cultural construct, but we understand food as a landscape,” Schwabe told Midnight Publishing Group News. “How does food organize our patterns?”

Based in London, the two both come from architecture backgrounds, and have been working together for several years, honing in on the niche, yet ubiquitous, subject matter of what and how we eat, how we relate to food, and how food relates to industry and the climate. 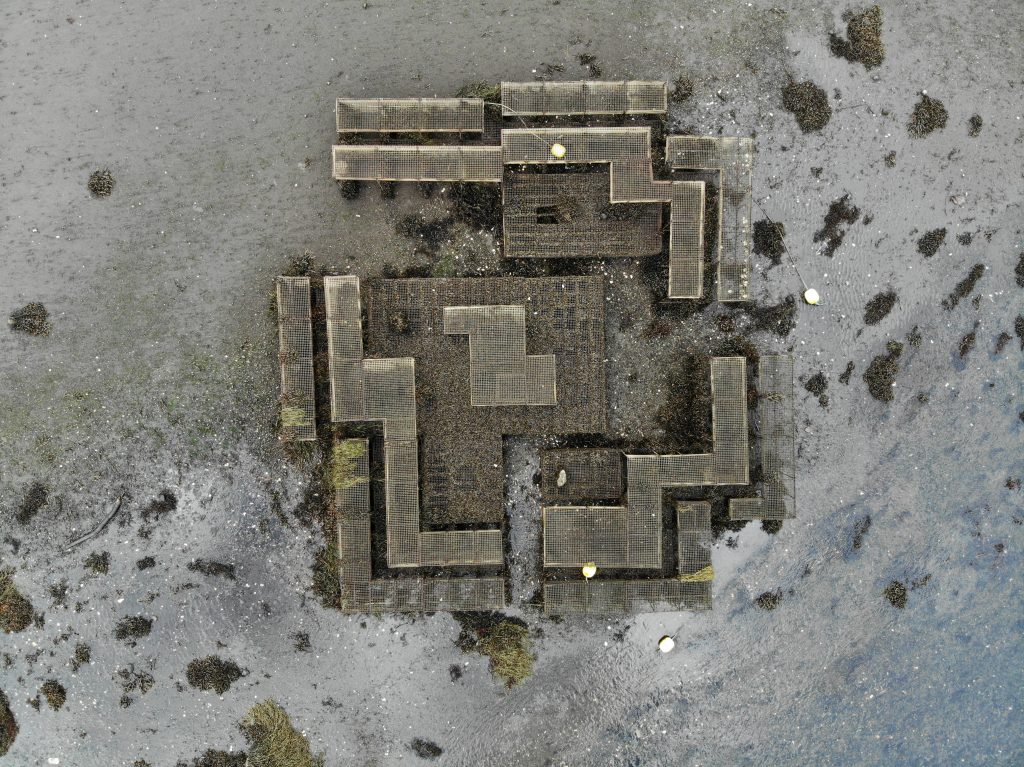 Their unique way of working—their long-term projects often target or discuss structural changes and, in some cases, have no specific end date—are an anomaly in the art world. That is the point: to present a challenge to museums’ stacked calendars and time-tested methods.

The two are finding growing acclaim. While the commercial art business has so far not been a place of focus, the duo have a project presently on view at the Tate, and recently created a project for Serpentine Galleries. They have exhibited at the 12th Taipei Biennial and the 58th Venice Biennale, as well as at Performa 17 and Manifesta 12. They’ve also been shortlisted for this year’s Turner Prize. 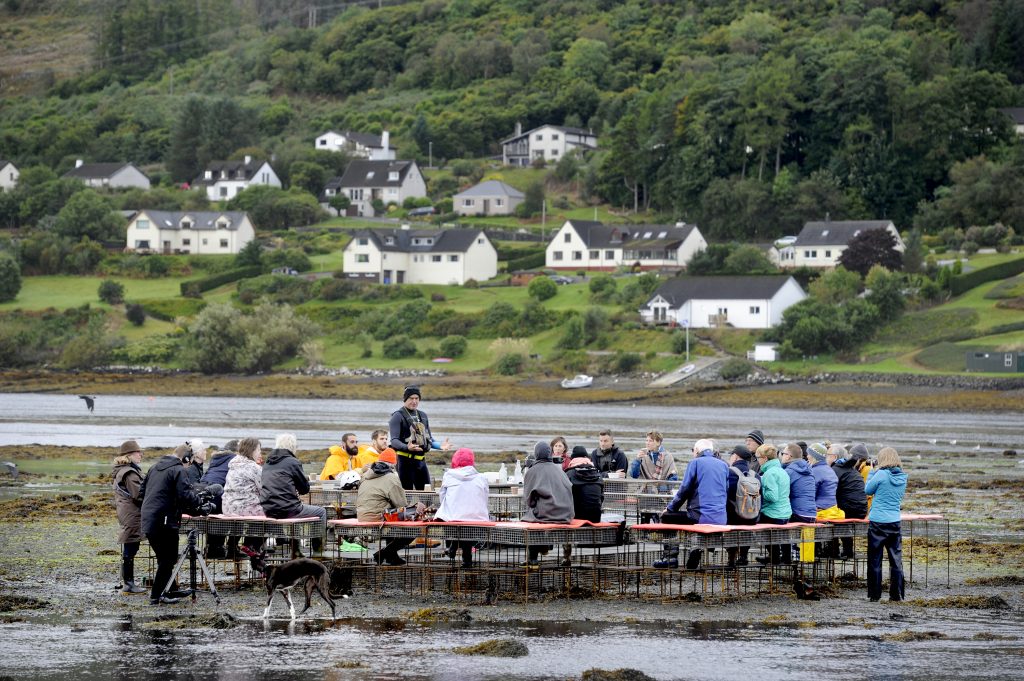 Cooking Sections’s project on the Isle of Skye.

Asking where the two were raised does not garner much of an answer. “We are more interested in speaking about where we are based with our projects, rather than portraying a certain kind of personal narrative,” Schwabe said. (That said, the two met at Goldsmith’s in London and bonded over their shared interest in infrastructure and its impact on nature and society.)

Pascual describes their practice as an “aggregator” of ideas and discussions, one that sits at multiple crossroads. Indeed, their themes often straddle the food industry, economy, politics, and the environment. And because their work focuses on what is most familiar and intimate to us, it is deeply relatable.

On the Isle of Skye in Scotland, for example, Cooking Sections created their first chapter of an ongoing series called “Climavore,” building a meshed metal table that community members can sit at during low tide. Then, when the tide comes up again, the structure transforms into an underwater shelf that can host several local species. Another project, Offsetted, which was on view in 2019 at the Arthur Ross Architecture Gallery in New York, questioned the validity of offsetting carbon emissions, which essentially turns trees into cash, making nature, yet again, into an involuntary maintainer of the capitalist economy.

And while their work might come up in an artistic context, it is really only passing through it.

“The art world is supportive to a certain point, but it is hard to say that art is an end place for Cooking Sections,” Schwabe said. “It can be a great springboard, but the project does not end there. Cooking Sections can grow or scale into many different places where life is being constructed and where change is being made.” 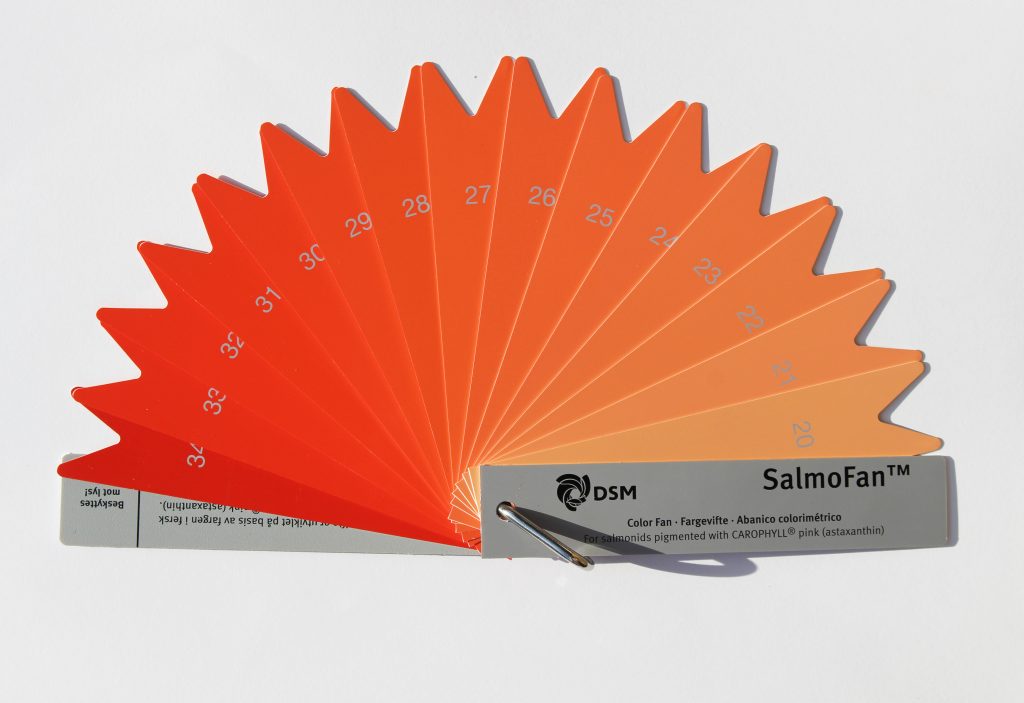 The duo have begun to ask museums for long-term commitments and, often, permanent structural changes. “You can’t be ticking boxes—that’s going to go nowhere,” Pascual said. “Systemic change has to happen within institutions, in terms of all the ways in which they operate.”

Schwabe says it can sometimes be a challenge to convince institutions to undertake their ideas and methods. Still, they’ve been largely accepted. “The cultural sector is accustomed to constantly asking what is new,” he said. “But if we are to take environmental questions seriously, we have to be committed to work for 10 years or more on the same issue. It has taken us decades and centuries to annihilate certain species and civilizations. It’s going to take a long time to undo this damage, and we have no time, so it’s a super urgent question.”

Their most recent deep dive was into salmon, a largely farmed species that has very little in common with the salmon one might have hauled out of a cold river a century ago. At Tate, Cooking Sections doused a room in pink lights to wade into the issue. The colors of the installation shift across pinks, following the SalmoFan, a trademarked palette that helps guide salmon farmers on what pellet to feed their salmon (different cultures like different depths of the shade, apparently). Farmed salmon, without being dyed by what its fed, would be grey.

They are working with the museum to take (and keep) farmed salmon off their menus. Though it opened this spring, the exhibition, which is accompanied by an installation, should have lasting effects.

“One doesn’t need to be an omnivore, a carnivore, a vegetarian, or a vegan, but a climavore,” Schwabe said. The perspective considers consumption and human relationships with food through the reality of a rapidly changing climate. 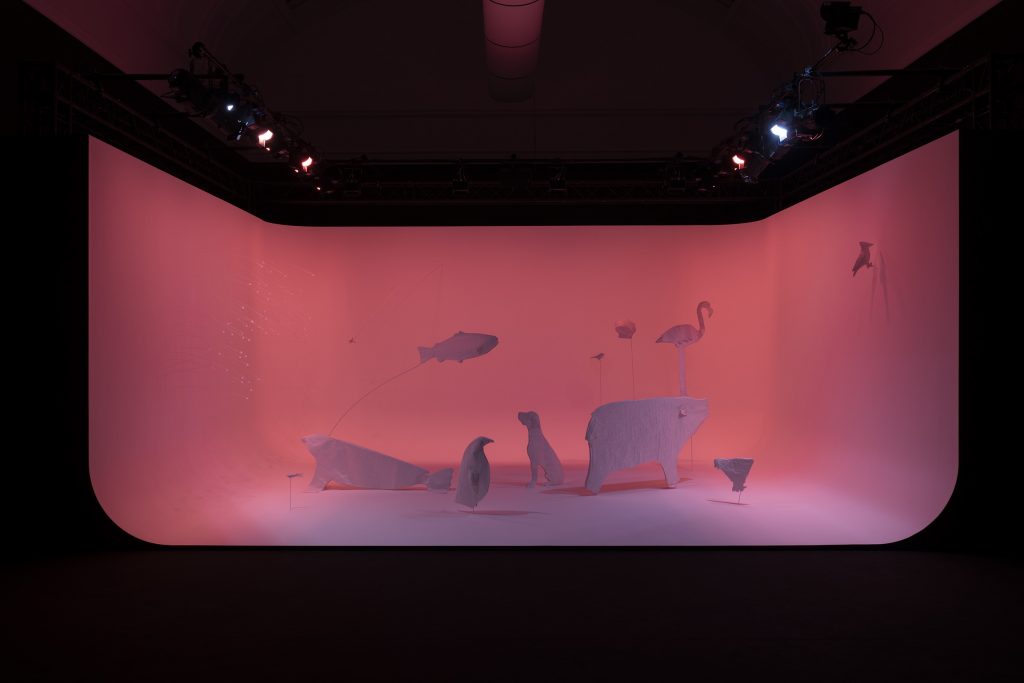 While their work and the information they platform is certainly unsettling—after learning more about farmed salmon, one will find it hard to find the food remotely appealing—it is important, they emphasize, not to create feelings of guilt. “Patterns of consumerism try to induce exactly those kinds of feelings as a mechanism to make us consume more,” Schwabe said. Whether it is fair-trade or organic, these kinds of titlings are largely keeping the same dynamics of supply and demand in place.

The two are grateful for the Turner Prize nomination, which shortlisted only collectives this year. As a duo, they are the smallest one. “We are a different collective than other collectives, and we have a lot to learn from the others, who have more sophisticated and interesting way of operating,” Schwabe said.

They won’t say much about what they are planning for the Turner exhibition, but it sounds like they’ll use the show to continue focusing on their core issues. “It works very well as a platform to amplify what we’re trying to do, and it’s something that, in terms of outreach, goes beyond what a conventional art exhibition could do,” Pascual said.

“How do you transform these platforms?” Schwabe asked. “How do you take them on, rather than saying they should be brought to an end? In the end, that might be the conclusion. But until that happens, there’s work to be done.”

Cooking Sections’s “Salmon: A Red Herring” is on view at the Tate until August 31.


Just days after being nominated for the Turner Prize by Tate in London, a UK-based art collective has called out the institution for its alleged exploitation of Black and POC artists.

Black Obsidian Sound System (B.O.S.S.), a queer, trans, intersex, Black people and people of color collective, took to Instagram yesterday to address some of the discrepancies they see between their mission and the way Tate, which oversees the prize, conducts its business.

“Whilst we are grateful for the recognition for our work as a collective, it is important for us to name some of the inconsistencies as we observe them,” the group in its statement. “We demand the right to thrive in conditions that are nurturing and supportive.”

The group, one of five social practice collectives nominated for the prize last week, called out Tate for a number of recent incidents, including the institution’s cutting of jobs during the pandemic and its handling of a young Black artist’s allegations of sexual harassment against a prominent donor.

“It is not lost on us that the collective action of workers coming together to save their jobs and livelihoods was not adequately recognized by Tate,” the group said, referring to a 2020 strike by Tate’s retail, catering, and other commercial-services staffers.

The collective also said Tate and institutes like it do not provide artists’ groups with the same resources they offer to solo artists.

“Although we believe collective organizing is at the heart of transformation, it is evident that arts institutions, whilst enamored by collective and social practices, are not properly equipped or resourced to deal with the realities that shape our lives and work,” the group said.

“We see this in the lack of adequate financial remuneration for collectives in commissioning budgets and artist fees, and in the industry’s in-built reverence for individual inspiration over the diffusion, complexity, and opacity of collaborative endeavor.”

Exemplifying this is the short time frame B.O.S.S. and the other collectives were given to prepare for this year’s Turner exhibition, the group said.

Notified last week, the shortlisted artists’ groups have less than four months to prepare new work for the show, which is set to open at the Herbert Art Museum in Coventry, England, on September 29.

“The urgency with which we have been asked to participate, perform, and deliver demonstrates the extractive and exploitative practices in prize culture, and more widely across the industry—one where Black, brown, working-class, disabled, queer bodies are desirable, quickly dispensable, but never sustainably cared for,” B.O.S.S. wrote.

“Artists must be free to express themselves and share their views however they wish,” Tate said in a statement shared with Midnight Publishing Group News. “Both the team at the Herbert in Coventry and Tate want the collectives to feel supported and look forward to working with them on the Turner Prize exhibition over coming months.”

Tate did not say whether it has been in touch with B.O.S.S. since the publication of the group’s statement.

Founded in 2018, the 18-member collective stages live events and music workshops in a hybridized, participatory brand of art, activism, and community organizing.