Ask Mari Spirito, the Istanbul-based director and curator of art nonprofit Protocinema, about censorship in Turkey, and you’ll get the retort of a person who’s gained the bigger-picture perspective afforded by living between different cultures. “But that’s happening in the United States, too! And it’s fascinating to me that Americans don’t realize that they’re also responding to what they can and can’t say,” she told Midnight Publishing Group News in a video call from the Turkish metropolis on the Bosporus. “Of course, working in Turkey, you have to be aware of what lines you can and cannot cross, but the lines move a lot as well, so you’re always working around that.”

Circumventing taboos and signaling to its audience in code are part of what make Protocinema’s programming so compelling. Founded by Spirito a decade ago, Protocinema stages what it describes as “site-aware” shows, with a strong focus on video installations, never using the same venue twice. “There’s a perfect storm that needs to happen when I choose spaces,” she explains. “It has to make sense for the artist’s work, I need to be able to afford it—which means it’s cheap or free—and it has to be with joy. I don’t want a space where I have to fight with the people or have any pushback.”

Spirito’s initial goal was to encourage artistic exchange between Istanbul and New York, but over the years, the program has expanded to occasionally curate programs in additional locations around the world via partnerships with other organizations. This September, Protocinema is marking its ten-year anniversary with a group show in Istanbul titled “Once Upon a Time Inconceivable,” with video installations and sculptures by Banu Cennetoğlu, Paul Pfeiffer, and Abbas Akhavan, to name a few, that examine processes of perception and realization. If this theme resonates in year two of a paradigm-shifting pandemic, it also encompasses a personal reckoning for Spirito: “I realized recently that what I’m doing with Protocinema has to do with unpacking and healing my own issues and the things that I’m concerned about,” she says, and goes on to describe a complex formative experience.

When she was in her early twenties, her younger sister joined Sun Myung Moon’s Unification Church. “It was a destructive mind-control cult in the most textbook way,” Spirito says. “I dropped out of art school and did everything I could to get her back.” It took seven years, and “at the time, I thought that I was an adult taking care of things,” she says. It’s only recently that she realized she also got swallowed: “It happened to me, too! What I’m doing here has to do with working out my own issues with a totalitarian context.” 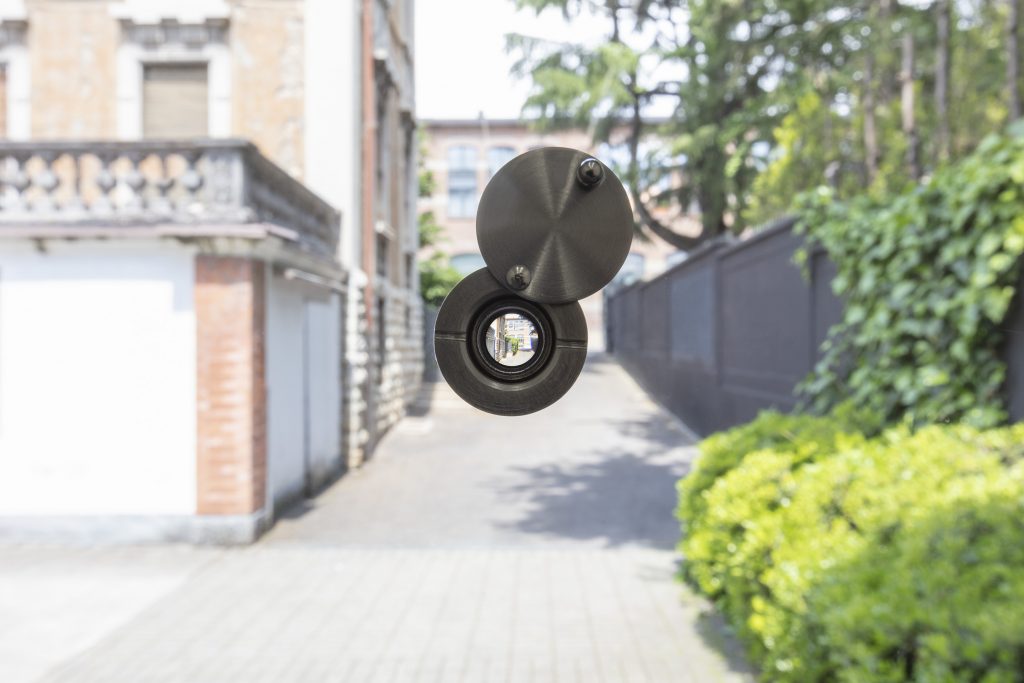 Ceal Floyer, Viewer (2011–2021), to be featured in Protocinema’s forthcoming exhibition “Once Upon a Time Inconceivable.” Courtesy the artist and Galleria Massimo Minini.

An Intuitive Response to Change

Against this backdrop, Spirito’s semi-expatriate path from the art world’s center to one of its peripheries seems less random. She was nearly two decades into a career as a gallerist, ensconced in New York as a director of 303 Gallery, when Istanbul hosted the World Water Congress in 2008. Inspired to take action about the global water crisis, she took some time off from her high-profile job to engage in community organizing in Turkey around the alarming privatization of water. In the process, she got into conversations with the local art community. She recounts feeling inspired by the spirit of innovation in the Turkish art scene at the time, and artists’ and curators’ ability to work with what she describes as “lean materials but with very rich and dense content.”

Meanwhile, back in New York, the bubble was about to burst. “It was a big and shiny art world; prices were getting higher and higher, art fairs were getting more predominant,” she says. Engaging with the art community in Turkey, on the other hand, had a different sense of purpose: “People making art here weren’t doing it because they wanted to be represented by a gallery and sell art; they were doing it because they had something to say which was urgent and important to them. It felt richer here.” Later that fall, the market crashed.

Founding a nonprofit felt like an organic response. From the get-go, it was clear that having fixed overhead costs wouldn’t make sense for what Spirito envisioned. “The best way to raise money is not to spend any,” she quips. Instead, Protocinema seeks out empty storefronts, disused warehouses, or other sites to stage its shows, with an emphasis on public access. “I love galleries and museums and Kusthallen and ICAs,” she says. “It wasn’t about negating anything, it was adding on.” Her guiding principle for Protocinema became, “Can I bring something more to the conversation?” 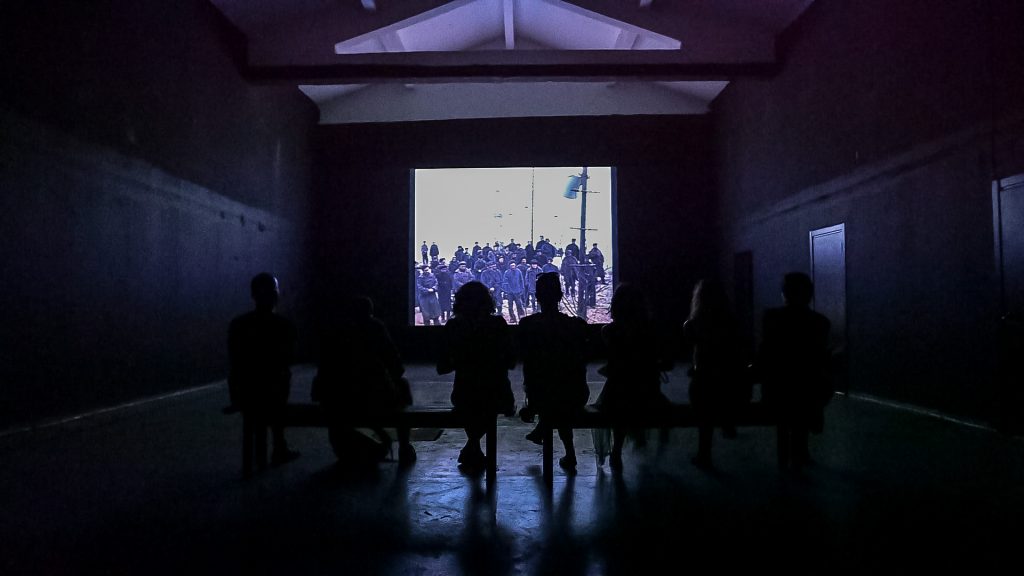 The answer is a resounding yes. Take, for example, the exhibition by Albanian artist Adrian Paci, “Interregnum,” which Protocinema showed in Istanbul in 2017, one year after an unsuccessful coup to unseat President Recep Tayyip Erdogan. (The coup usually comes with the epithets “attempted” or “faux,” depending on who you ask.) Paci’s video installation of the same name is collaged from found footage from around the world of massive, state-organized grieving ceremonies for unnamed rulers. It’s a quietly subversive investigation of fear, absence, mourning, the theatrics of power, and cults of personality. The work was projected inside a cavernous former matzo bakery near Galata Tower. “I was able to show it in a beautiful space and announce it publicly,” she recalls, “but I think that if one of the institutions here showed it, it would have been read in a different way and might have been more risky. Being small sometimes protects us.”

The exhibition coincided with the Istanbul Biennial curated by artists Elmgreen & Dragset, which some journalists criticized as lacking in political statements. (In my review for Midnight Publishing Group News, I disagreed with that criticism). “The fact that the biennial was so highly coded just shows you how tight the silencing is,” Spirito adds.

For five years up until 2018, Spirito also led Art Basel’s Conversations program in Basel and Miami Beach. As in her sharp and sensitive programming for the art fairs, her curatorial approach with Protocinema is guided by a deep generosity and interest in listening and learning: “It always starts with the artists. Being ahead of the curve on conversations comes from the artists.” On the eve of the 2016 U.S. elections, for example, Protocinema mounted an exhibition in Paris by Turkish artist Lara Ögel, which looked at patriarchal structures and the urge to flee them. Earlier that same year, Protocinema opened a show by Allora & Calzadilla in Istanbul, which ended up coinciding with the coup. The artists didn’t feel comfortable traveling to Turkey for the opening, but their video work The Great Silence (2014)—which deals with the limits of human perception and the loving message from a parrot to its dying owner—made an impact. “People were going into the show saying, ‘Thank God this artwork is here right now,’” Spirito recalls. 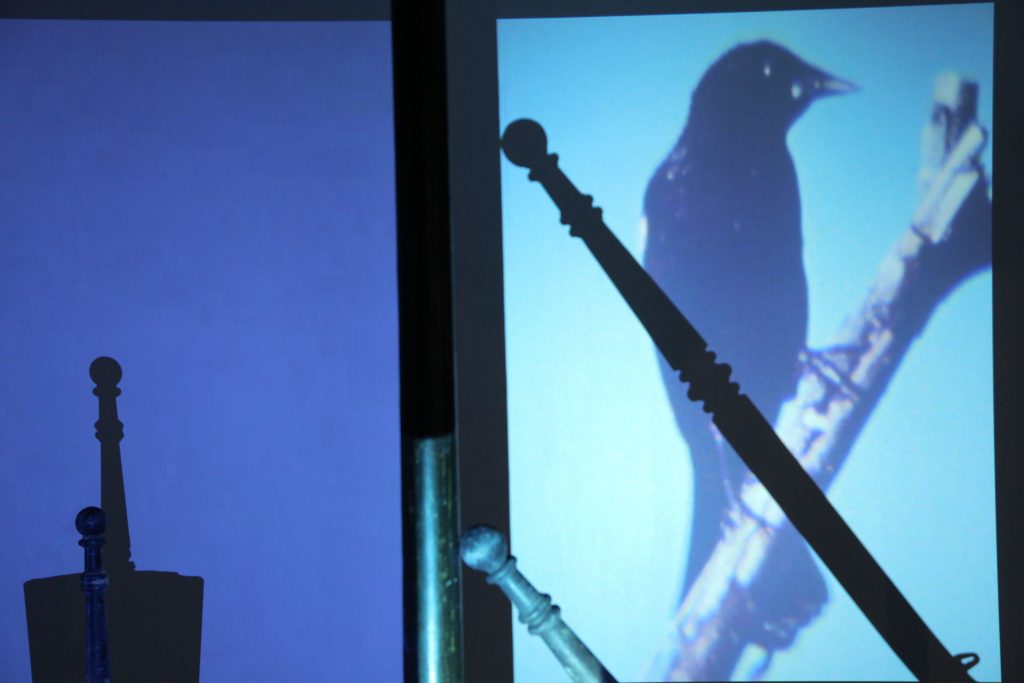 Lara Ögel, “Come back! All is Forgiven” (installation view), presented by Protocinema in Paris in 2016 and supported by SAHA, Istanbul.

Spirito ensures that Protocinema, which now boasts a fixed staff of three, plus three long-term freelancers, is constantly reinventing itself. In addition to two commissions a year, in New York and Istanbul, since 2016 Spirito has also run an Emerging Curator Series, in which Protocinema invites young practitioners to work on exhibitions with experienced curators as mentors. (A recent one, curated by Alper Turan, reacted to violence against the queer community in Turkey.) In 2017 Spirito launched a traveling tour of artists’ videos, sent as digital files to institutions around the world. This year’s program, curated by Asli Seven, is going to 12 cities, including venues in Tbilisi, Georgia; Nice and Bourge, France; and Prizen, Kosovo.

This flexible approach meant that Protocinema was uniquely prepared to stage shows during the pandemic. And so in 2020, a new model was introduced with “A Few in Many Places,” a group show in which each participating artist shows wherever they’re based, in a space that is not subject to lockdown restrictions: Philadelphia, Beirut, Berlin, Montreal, and Istanbul. A zine published in all locations connects the show’s disparate parts through texts. “I didn’t want to be part of the huge retreat online,” Spirito says. “I wanted to keep a foot in real life, because we need both.”

She adds with a chuckle, “I’ve been working remotely for years! Finally people got what I was doing. But that just means I need to move the bar further now.”

“Once Upon a Time Inconceivable” is on view at the Yeni Kundura Building in Istanbul September 4–October 10, 2021.