Sussex police are urging members of the public to come forward if they have any information related to Friday evening’s theft at England’s Arundel Castle, where thieves made off with worth more than £1 million ($1.4 million) worth of royal artifacts.

When police arrived on the scene just a few minutes after the crime, they found the display case disturbed and objects stolen. The castle had only reopened on May 18 after an extended closure due to the global pandemic.

Among the gold and silver items taken were the gold rosary beads that Mary Queen of Scots held at her execution on February 8, 1587. Other stolen items include several coronation cups given to the royal family and other ceremonial objects.

“The stolen items have significant monetary value,” said a spokesperson for the Arundel Castle Trustees, “but as unique artifacts of the Duke of Norfolk’s collection have immeasurably greater and priceless historical importance.” 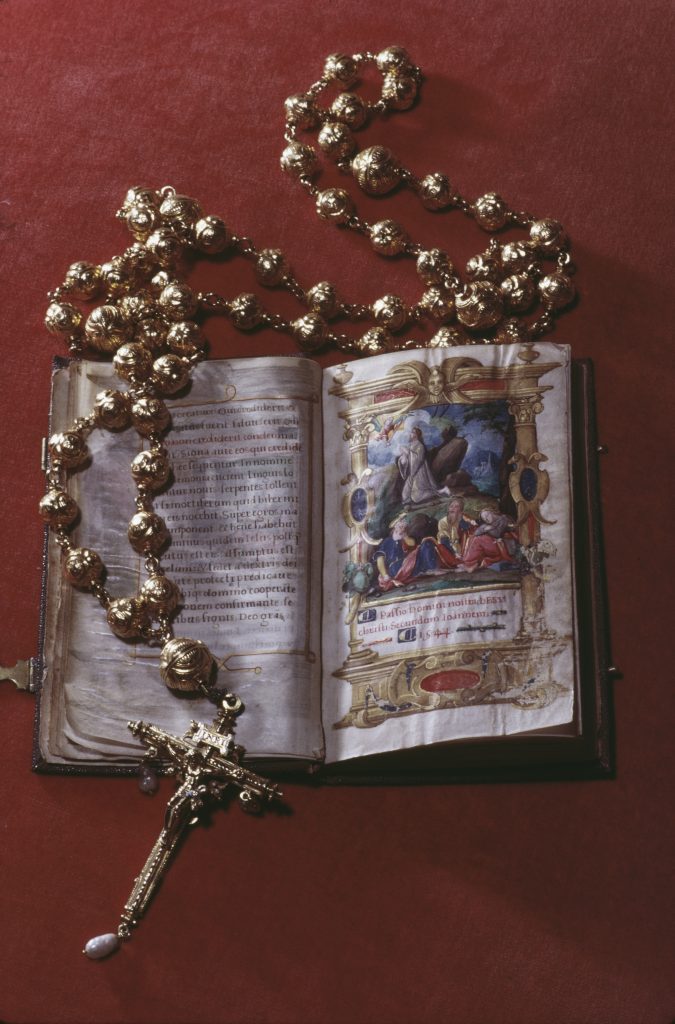 The rosary beads and bible belonging to Mary Queen of Scots (1542-1587) on display at Arundel Castle, Sussex, January 1968. Photo By RDImages/Epics/Getty Images.

The beads are hollow golden spheres with designs on the outside in black enamel. A drop pearl hangs from each arm and foot of the cross, and a gold figure of the crucifixion sits in the center.

Mary Stuart was born in 1542, the only surviving legitimate child of King James V of Scotland, and acceded the throne at just six days old when James died. The infant queen spent the majority of her childhood in France while Scotland was ruled by regents, since she was a minor. After the death of her first husband, the Dauphin of France, Mary returned to Scotland and eventually married her half-cousin Henry Stuart. They had a son named James in 1566.

Henry was murdered one year later, and Mary wed his alleged killer, James Hepburn, spurring an uprising against the couple despite Hepburn’s ultimate acquittal. Mary was forced to abdicate the throne to her infant son, and after a brief period of imprisonment escaped Scotland to England with hopes to persuade her Protestant cousin Queen Elizabeth I to help her. As a devout Roman Catholic, Mary was seen by many as the legitimate heir to Henry VIII’s throne, but instead Elizabeth forced Mary into 19 years of imprisonment, as the queen’s allies propagated claims of treason and conspiracy to murder, and Mary was sentenced to death by her cousin in 1587.

According to historians, Mary carried the rosary beads with her to the scaffold, after which they were bequeathed to the Countess of Arundel and eventually transferred through descendants to the Duke of Norfolk, where they were kept until now.