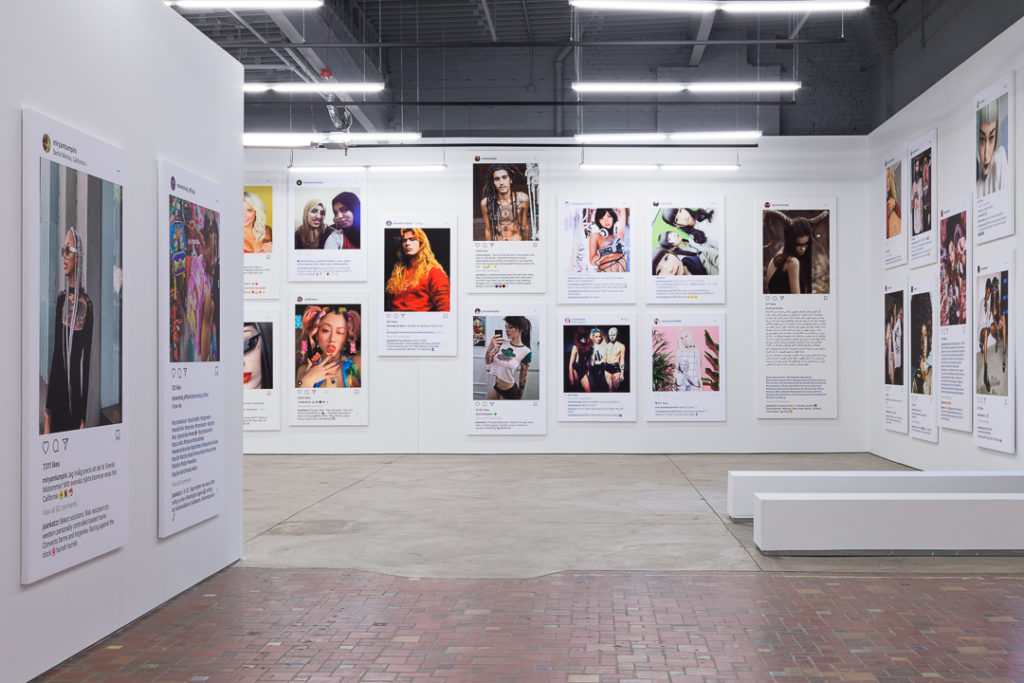 Angelina Jolie Is Selling a Very Historic Painting – The actress has consigned Winston Churchill’s only wartime painting, which he once gifted to FDR, at Christie’s, where it could fetch more than $3 million.

Inside the Outsider Art Fair – One of New York’s only IRL art fairs successfully took place in a satellite format across multiple galleries—despite a pandemic and raging snow storm.

Up Next – Which artists are poised to make it big in 2021? We asked curators, dealers, and collectors for their picks.

Influencer-Approved – A cheeky artist devised a satirical scheme to offer IRL blue “Twitter-approved” checkmarks to the homes of San Francisco influencers, and a lot of people signed up for real.

Gee’s Bend Gets a Big Platform – The colorful handmade quilts are being sold online for the first time in a new partnership with Etsy.

Sterling Ruby Makes Fashion History – The multidisciplinary artist is the first American to show a couture collection at Paris Fashion Week in 10 years.

Germany Boosts Culture, Again – The country approved yet another €1 billion in aid for the ailing cultural sector.

Emma Amos Gets Her Due – The late artist is the subject of an exhibition that finally shows the depth and breadth of her striking work.

Guerrilla Girls Cut Ties With Publisher – The activist artist group called off their book deal with Phaidon over the company’s links to Leon Black.

Museum Directors Call to Reopen – More than 100 museum directors and curators in France are calling on the culture minister to reopen art institutions, claiming their work is a necessary public good.

US Supreme Court Rules Against Heirs – The court denied Jewish heirs’ request to reclaim the staggering $250 million Guelph Treasure from Germany in a landmark decision.

Faux Fabergé – An exhibition at Russia’s Hermitage Museum is filled with “tawdry fakes” passing for the real objets d’art, according to a scholar.


Art Industry News is a daily digest of the most consequential developments coming out of the art world and art market. Here’s what you need to know on this Monday, February 1.

On the Rise of Bad Figurative Painting – In an essay quickly making its way around social media and art-world inboxes, Dean Kissick takes aim at what he sees as one of the most toxic trends in art: bad figurative painting. The most in-vogue young artists, he contends, create “quirky, esoteric mash-ups” that feel “less like stylistic innovations and more like branding exercises, reflecting a present in which one’s ability to market oneself is more important than mastering a craft or coming up with fresh ideas.” (Spectator)

The Holt/Smithson Foundation Launches Commission Program – The foundation established by the late land art pioneers Robert Smithson and Nancy Holt is launching an ambitious new project. Five artists—Tacita Dean, Renée Green, Sky Hopinka, Joan Jonas, and Oscar Santillán—have been invited to develop a proposal for a new work inspired by an uninhabited island in Maine that the couple purchased sight-unseen in 1971. The nominees, who received the invitation out of the blue, will have the next three years to dream up an idea; the foundation will then seek out partners to help realize them. (The Art Newspaper)

Leading Old Master Dealer Dies of COVID-19 – Richard Feigen, a highly influential Old Master dealer who operated galleries in Los Angeles, New York, London, and Chicago, has died from complications related to COVID-19. He was 90. The gallerist, who described himself as “a collector in dealer’s clothes,” started out in the ’60s offering ambitious contemporary art—he gave Francis Bacon his first US show—before breathing new life into the Old Master field in the ’80s. In popular culture, his legacy lives on the legendary Tom Wolfe essay in which the writer coined the term “radical chic,” which captured the dealer at a party for the Black Panthers. (ARTnews)

Panel Flags 40 Works of Public Art in Chicago as Problematic – As part of an ongoing effort for “racial healing and historical reckoning” in Chicago that echoes those underway in cities across the US, local officials have identified some 40 public artworks with connections to “white supremacy, slavery, and inaccurate portrayals of Indigenous people.” A full list of the monuments to be formally reviewed will be announced in the coming weeks. It is unclear what steps will be taken after the review period. (Block Club Chicago)

Yusaku Maezawa and YouTuber Snap Up Outfits From BTS – The highly acquisitive Japanese art collector and a famous YouTuber, HIKAKIN, shelled out $162,500 for a group of colorful costumes worn by the top K-Pop band in the 2020 music video for “Dynamite.” The lot sold to the two buyers at Julien’s Auctions for more than eight times its pre-sale estimate. (Press release)

Muse’s Art Collection Sparks Row – There’s a battle afoot over the fate of the collection of June Furlong, a friend and muse to such artists as Lucian Freud, Francis Bacon, and John Auerbach. Although friends said Furlong, who died in November, wanted to donate her collection to the Williamson Art Gallery in the UK, she left no will—and selections of her trove, including five Auerbach prints, were sold by Hansons Auctioneers in December for a total of £42,000 ($57,480). (Guardian)

Miles McEnery Gallery Expands – The New York gallery is opening a third location in Chelsea later this year at 511 West 22nd Street, the space formerly occupied by Danese/Corey and Max Protetch. Its staff is growing, too: Peter Luke Colon, formerly of DC Moore Gallery and Matthew Marks, is joining the team as managing director as of today. (Press release)

Art in America Editor Departs – William S. Smith is leaving his post as editor-in-chief of Art in America after more than three years to take up a new editorial position at the forthcoming (and long-delayed) M+ museum. He will lead the museum’s digital and editorial content and will be based in Hong Kong. (ARTnews)

Vatican Museums Reopen – The Vatican Museums, including the Sistine Chapel, will reopen today after 88 days of closure. Public health restrictions are being eased in all but five Italian regions, although non-essential travel between regions is still restricted. (The Local)

Tanoa Sasraku Wins Futures Award – The 25-year-old UK artist has been named this year’s winner of the Arts Foundation Futures Award. Sasraku, whose practice spans drawing, film, and flag-making inspired by her ancestors in Ghana, will receive £10,000. She was chosen by a panel of judges including Frieze editor Andrew Durbin, curator Fatoş Üstek, and artist Lubaina Himid. (The Art Newspaper)

Berkshire Museum Unveils Upgrades – The Berkshire Museum has spent part of the proceeds from its highly controversial 2018 collection sell-off on an infrastructure boost. Upgrades include a new sewer line, a freight elevator, new restrooms, improved LED lights, and waterproofing. The museum—which spent around $3.5 million of its $50 million windfall on the refurbishment—plans to reopen fully to the public this summer. (Ridgefield Press)

Pussy Riot Releases Its Latest Music Video – Pussy Riot had released a music video for its latest song, “RAGE.” The protest anthem calls for Putin to release all political prisoners in Russia, including the opposition leader Alexey Navalny and the punk band’s own Masha Alekhina, who is under house arrest for posting in support of Navalny on social media. “Imagine that Trump stayed in the office for the second time and he jailed AOC and her supporters,” the band’s Nadya Tolokonnikova says in a statement. “What’s happening in Russia is outrageous and unacceptable. Putin must go.” (Press release)

The incident was announced this week on social media by Qatar Museums, a government organization that oversees the country’s public art. It did not share details of the damage, which took place in late December, but the organization said in a statement that the “vandals were apprehended by authorities, and were referred to Public Prosecution for the necessary legal action to be taken against them.”

“Vandalism of all kinds is a crime punishable by law,” the statement continues, “and Qatar Museums emphasizes our collective social responsibility to preserve public art.”

Neither Qatar Museums nor Gagosian Gallery, which represents Serra, immediately responded to requests for comment.

Despite its remote location in the Brouq nature reserve, Serra’s sculpture, East-West/West-East, has been defaced numerous times since it was erected in 2014. Last March, Qatar Museums reported that the artwork saw “significant and deliberate damage” from visitors.

In September, the organization launched an “anti-vandalism campaign” to protect public artworks in the country. As part of the effort, Serra’s sculpture was cleaned of graffiti and the state installed banners in the nearby village of Zekreet discouraging vandalism. The state may also soon implement surveillance systems in the area.

“Monitoring the artworks has proven to be quite challenging, as many of our artworks are interactive,” acting director of the public art department at Qatar Museums, Abdulrahman al-Ishaq, told Gulf Times last month.

The director explained that Qatar Museums are hoping to launch a series of educational programs around the state’s public art, including lectures and debates, and will make freely available informational materials about the collection for children and families.

“Although these artworks are not confined to a closed space, the community must understand that public art is an extension of a vast collection built by [Qatar Museums] and it is in part their responsibility to embrace and take ownership of these artworks,” al-Ishaq added in the newspaper.

East-West/West-East is one of two public artworks created by Serra in Qatar. A cluster of large steel plates comprises the other, titled 7, which was installed outside the Museum of Islamic Art in Doha in 2011.