In recent history, few artworks have captured the public imagination quite like the Obama Portraits—the official portraits of 44th U.S. President Barack Hussein Obama and former First Lady Michelle Obama, which set off a media firestorm when they were unveiled in 2018.

The president’s portrait, painted by Kehinde Wiley, and the first lady’s, painted by Ashley Sherald, marked a sharp—and refreshing—departure from the staid, traditional styles with which these official portraits had become synonymous.

And it wasn’t just the art world that was enthralled. When the portraits went on view at the National Portrait Gallery in Washington, D.C., attendance skyrocketed 300 percent. Visitors not infrequently broke down in tears before the paintings.

Since then, the public’s enthusiasm has not waned. Now, in an attempt to bring the images to a wider audience, both portraits have been sent on a cross-country museum tour that will last into spring 2022. With the first leg at the Art Institute of Chicago having just ended, the portraits will go on view at the Brooklyn Museum next week, from August 27–October 24. They will then travel to the Los Angeles County Museum of Art, the High Museum in Atlanta, and the MFA Houston.

To mark the tour, as well as President Obama’s recent 60th birthday, we decided to take a closer look at Kehinde Wiley’s foliage-filled portrait. Here are three details that just might change the way you see it.

1) Wiley Does Away With (Most) Of His Famed Historical Motifs 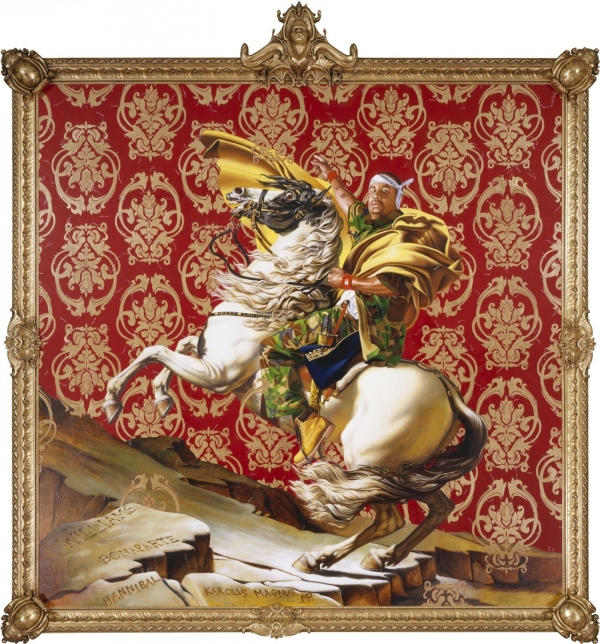 Kehinde Wiley, Napoleon Leading the Army over the Alps (2005). Collection of the Brooklyn Museum.

One of the most celebrated artists of our generation, Kehinde Wiley has defined his career with monumental oil paintings that often place Black men and women into traditional Western art-historical iconography and against lushly colorful, patterned backgrounds.

Arguably his most famous painting, Napoleon Leading the Army Over the Alps (2005), which is in the Brooklyn Museum’s collection, reinterprets Jacques Louis David’s Neoclassical masterpiece Napoleon Bonaparte Crossing the Alps at Great St. Bernard Pass (1801–5). Given Wiley’s dexterity with these political and art-historical references, one might have expected his take on the U.S. presidency—an office with no shortage of historical imagery associated with it—to be filled with eager eggs.

Instead, Wiley set Obama, the first African American president, in an environment free of overt references, though he retains the imposing physical scale of the history paintings he often echoes. (This one measures over seven feet tall.) Other points of inspiration are even subtler. Obama’s left foot, as New Yorker writer Vinson Cunningham aptly pointed out, doesn’t press into the earth as one might imagine, but floats in an almost otherworldly way, like a Byzantine saint in a golden eternal realm.

Here, Obama the person, rather than the office, is the focus. He is dressed in a nondescript black suit and white shirt, open at the collar, leaning forward toward the viewer with his arms crossed, as though he were listening or just about to speak. His expression could be seen as stern or reassuring. By eliminating any easily decoded symbols, Wiley offers a portrait that revels in its own ambiguity.

2) Those Flowers Are More Than a Pretty Backdrop 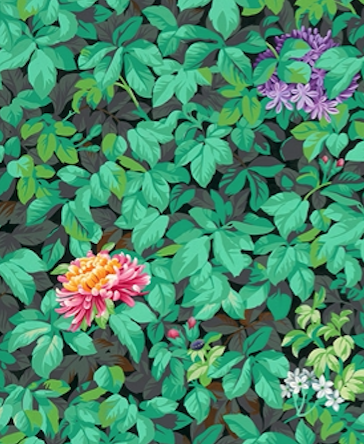 Where, we might ask ourselves, is the president meant to be, exactly? Seated in a varnished antique chair, he hovers against a lush green backdrop of leaves and flowers. (The enveloping background inspired some Internet jokesters to compare the image to the famous meme of Homer Simpson getting swallowed up by a green hedge.)

Wiley painted this portrait working from a series of photographs he made of the president and the image has been celebrated (rightly) for its verisimilitude. But the artist paid almost equal attention to the decorative elements of the picture. The highly varnished rosewood of mahogany chair rosewood of mahogany is a highly specific and yet unreal conglomeration of 18th and 19th styles with curved arms, inlaid patterns, and an oval back that combine aspects of English regency and American styles. (It’s worth noting that the decorative arts have, perhaps more than any other art form, quietly been shaped by the histories of trade, colonization, and warfare, from Chinoiserie to the Egyptian influence on Art Deco. Wiley’s blending of styles seems to purposely confound this connoisseurship).

As with many of his paintings, Wiley does not keep the flora neatly in the background but allows it to curl and twist with its own agency. Upon closer examination, the greenery is laden with symbolism: jasmine references Hawaii, where Obama was born; the African blue lilies represent Kenya, Obama’s father’s birthplace (Wiley’s father is Nigerian); and chrysanthemums are the official flower of Chicago, the city where his political career began and where, of course, he met Michelle Obama. 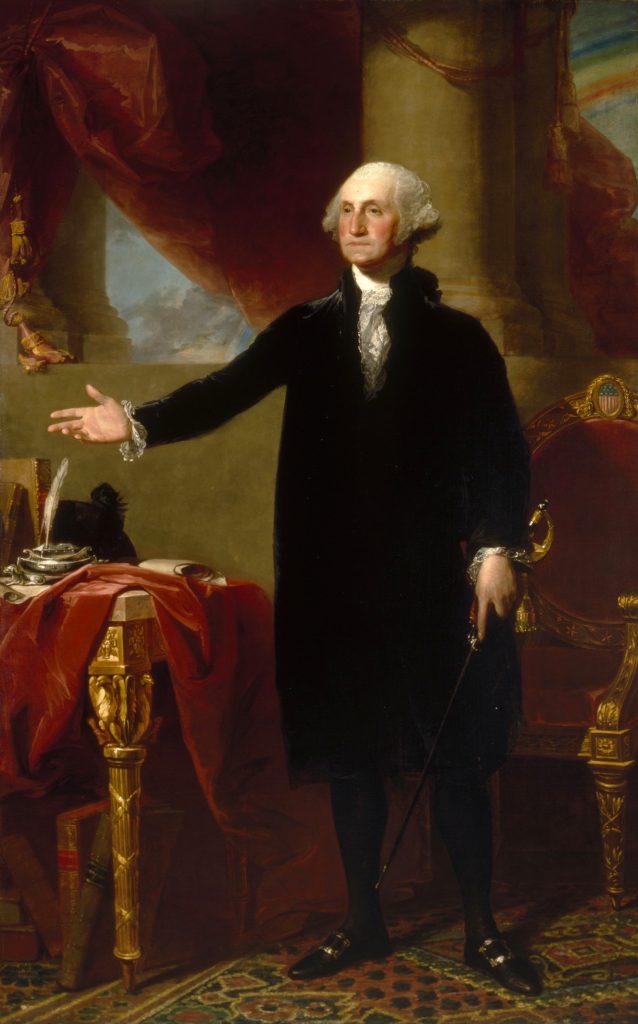 While Wiley has done away with his boldest art-historical references, that antique-looking chair Obama is sitting in has conjured up some critical interpretations. Art critic Holland Cotter noted in his New York Times review that Wiley’s portrait bears some resemblance to ​​Gilbert Stuart’s 1796 Lansdowne Portrait of George Washington, a version of which has hung in the East Room of the White House since 1800.

As Cotter notes, “the clothes are an 18th-century version of current POTUS style: basic black suit and fat tie.” Plus, the “vaguely throne-like chair [is] not so different from the one seen in Stuart’s Washington portrait.”

While in another context, this might seem an interpretive stretch, here it feels intentional: in the first presidential portrait, Washington stands beside an empty chair. Two hundred and twenty years later, Obama, the first African American president to occupy the White House (a house built by slaves), has taken a seat at the proverbial table.