U.S. President Joe Biden has cancelled his predecessor’s plans to build a National Garden of American Heroes, which would have memorialized figures ranging from George Washington to Kobe Bryant.

In an executive order signed Friday, Biden rescinded six Trump actions, including two outlining plans for the garden and a third calling for harsh prison sentences for anyone convicted of vandalizing existing monuments, reports the Associated Press.

All three orders were part of the former president’s response to the Black Lives Matter movement. As protests swept the nation last summer, demonstrators toppled and defaced statues and monuments—mainly those commemorating Confederate leaders, but also other controversial figures, such as Christopher Columbus and George Washington, a slave owner.

Trump saw such moves as an attempt to tear down “America’s cultural heritage,” and deployed the National Guard to Washington, D.C., to protect monuments in June. 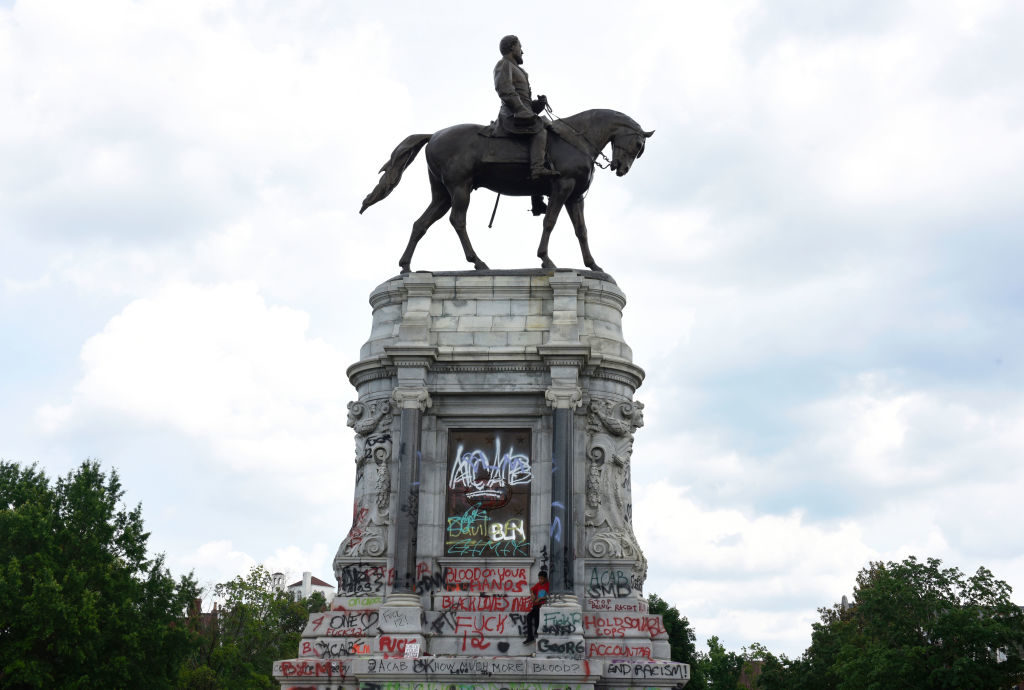 Protesters gather around the statue of Confederate General Robert E. Lee on Monument Avenue on June 6, 2020 in Richmond, Virginia, amidst protests over the death of George Floyd in police custody. Photo by Vivien Killilea/Getty Images.

Days later, Trump issued an executive order reinforcing the Veteran’s Memorial Preservation Act, stating that the U.S. would “prosecute to the fullest extent possible under federal law” anyone who “destroys, damages, vandalizes, or desecrates a monument, memorial, or statue.”

“These statues are not ours alone, to be discarded at the whim of those inflamed by fashionable political passions; they belong to generations that have come before us and to generations yet unborn,” the order read.

Trump announced his plan to build a sculpture garden memorial last July 4, during a fireworks display at Mount Rushmore. It called for the garden, which was branded as “America’s answer to this reckless attempt to erase our heroes, values, and entire way of life” to be created by 2026. 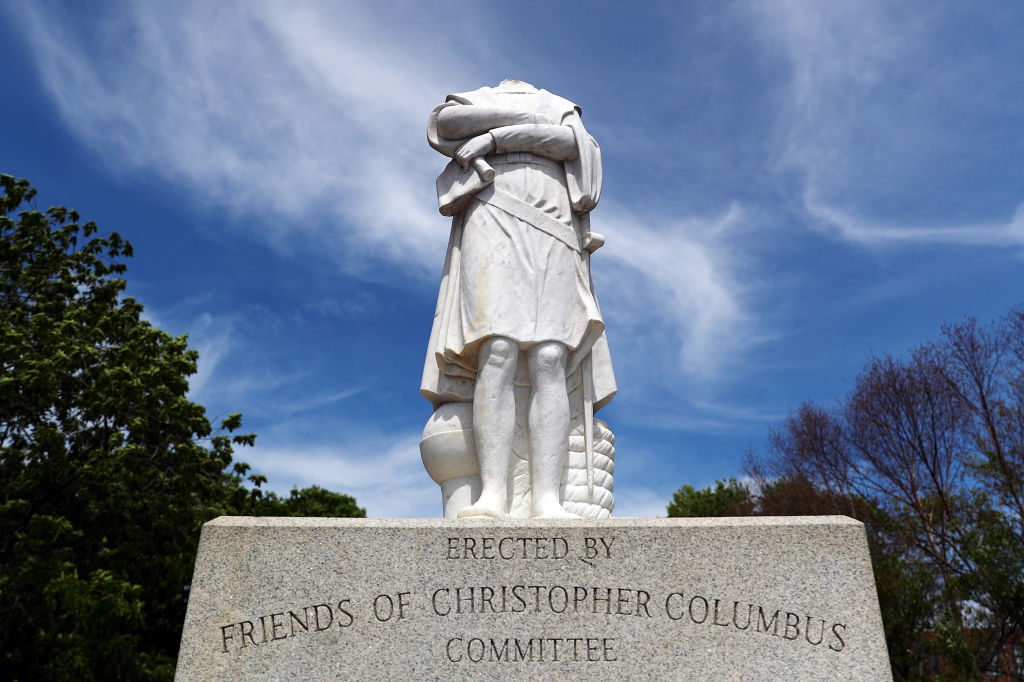 In one of Trump’s final acts in office, he revealed the garden’s planned honorees (even though it was clear the project would never be completed under a Biden presidency). The list contained 244 names, ranging from politicians to athletes to actors, all of whom were meant to represent “the greatest Americans to ever live.” It included Julia Child, Davy Crockett, Billy Graham, Whitney Houston, Harriet Tubman, Antonin Scalia, and Cy Young, among others.

The garden’s cancellation is largely symbolic since no congressional funding had been designated for the garden, nor had a site been selected.

Biden has also revoked a Trump order calling on the Department of Justice and the Federal Trade Commission to investigate the alleged censorship of Trump on social media.


Jean-Luc Martinez, the president of the Louvre whose job security has been a matter of public speculation for weeks, has had his stay at the museum extended—at least temporarily.

Yesterday, April 13, the French culture ministry announced that Martinez would be named interim president as it continued to deliberate as to whether to renew his contract.

The government was due to announce yesterday whether Martinez, who has been president since 2013, would keep his job, but says the decision has been delayed due to the pandemic. Roselyne Bachelot, France’s culture minister, returned to work Monday after spending three weeks in a hospital with Covid-19.

Bachelot, who is believed to support Martinez, has reportedly drawn up a short list of six names for French president Emmanuel Macron, with whom the decision lies, to review. Contenders for the post include Sophie Makariou, president of the National Museum of Asian Arts Guimet; Laurent Le Bon, president of the Musée Picasso; and Christophe Leribault, director of the Petit Palais.

Martinez’s quest to remain in the post is “the equivalent of a presidential election,” according to French daily Le Monde. The executive, 57, has been on a media tour in recent weeks, offering interviews to newspapers, magazines, and television outlets explaining his achievements at the world’s most visited museum.

He has also been addressing controversies that have unfolded under his watch.

“There are always disputes but one doesn’t steer a cruise-liner like the Louvre by changing it completely,” Martinez told Le Monde. “Things take 10 or 20 years to be implemented.”

An archaeologist by training, Martinez was director of the Louvre’s department of Greek, Etruscan, and Roman antiquities from 2007 to 2013 before being appointed president. His mandate was renewed for three years in 2018.

In an interview with Paris Match, Martinez was emphatic that his archaeological background was crucial. “As an archaeologist, I am the best armed to answer the question about the provenance of works, which is becoming more and more important,” he said.

But the museum’s merchandising initiatives are under scrutiny. An Airbnb partnership competition offering winners a chance to sleep under I.M. Pei’s glass pyramid coincided with the city of Paris seeking to have regulations imposed on Airbnb. Another sponsorship, with the French carmaker DS Automobiles, which is selling a €54,000 “Louvre” limited edition car, plus branding partnerships with Swatch, Monopoly, and Uniqlo, have been derided by some.

Martinez says these partnerships help the Louvre reach a wider, younger audience. Around 71 percent of the museum’s visitors are foreign, and half are under the age of 30.

Asked about the Louvre’s reasoning when signing a deal with Netflix on the Lupin series, which was filmed partly at the museum, Martinez replied: “The main criterion is: ‘Will it serve the image of the Louvre?’ […] When one receives this kind of project, one shouldn’t hesitate.”

Other disputes revolve around acquisitions and rumors about Martinez’s management style. “His enemies accuse him of selling the museum to tourists, carrying out costly [renovations], buying mediocre works, and behaving like an autocrat,” according to Le Monde.

The museum’s acquisition of Juno in the Midst of Clouds (circa 1735) by Giambattista Tiepolo, an oval fresco in poor condition that was originally commissioned for the Sagredo Palace in Venice, has been highly contested.

According to La Gazette du Drouot, the Italian collector and dealer Pier Franco Grosso purchased it for €775,000 in 2004 and sold it to the Louvre in 2020 for €4.5 million, with €1.5 million coming from the Société des Amis du Louvre, the museum’s patrons group. Le Monde reported that the acquisition was opposed by the director of the Louvre’s paintings department.

Another issue is a lawsuit filed by the Cy Twombly Foundation earlier this year over the redecoration of a room that includes a permanent ceiling installation by the artist. The foundation says the changes have ruined Twombly’s work.

In Paris Match, Martinez lashed out against the complaint. “This quarrel appears at the moment when I’m asking for the renewal of my mandate. The renovations were planned since 2008, when we envisaged installing the collections of Etruscan art. The ceiling painted by Twombly, his last work, was made in full knowledge of this eventuality and is in his contract. The ceiling wasn’t touched, it won’t be and will always be there.”

If Martinez’s mandate is renewed, it will be his third and last term. He says he has no plans to lead any other museum.