In a new format called La Trienal, El Museo del Barrio’s survey of contemporary Latinx art “Estamos Bien” asserts that Latinx art is defined by a confrontation to systems of power. Bringing together a collection of works from intergenerational artists without a history of exhibiting at the museum (save for Candida Alvarez), curators Susanna V. Temkin, Rodrigo Moura, and guest curator Elia Alba argue that while there is no singular form or aesthetic to Latinx art, it is intrinsically tied to social critique.

The show gathers works by 42 living artists and collectives spread over eight gallery spaces including the entry and a brand new gallery. These artists outline the resilience in Latinx culture, reclaim lost histories, elevate the quotidian, and some even laugh at the absurdity of it all.

With a diverse crop of diasporic artists with backgrounds from all over Latin America, Guyana, and some that identify as Indigenous, La Trienal shatters a rigidity within the ‘Latino’ label exemplified in previous gatherings. However, the political framing here that ties the artists to traumatic social issues isn’t necessarily novel. “Estamos Bien,” the museum’s first national survey, emphasizes strong convictions about the detrimental state of our environment, class and racial dynamics, and the forces powering displacement, but at times these convictions shine brighter than the works. Though the show spotlights artists who have been deserving of recognition for decades as well as many young artists demonstrating excellence early in their careers, the need to display the concerns of Latinx communities does take the front seat.

Upon entering, Peaceful Protest (2020), a photograph of Black Lives Matter protesters at a die-in by Philadelphia-based photographer Ada Trillo, sets the curatorial tone, which wavers between the serious, the sarcastic, and, at times, the poetic. 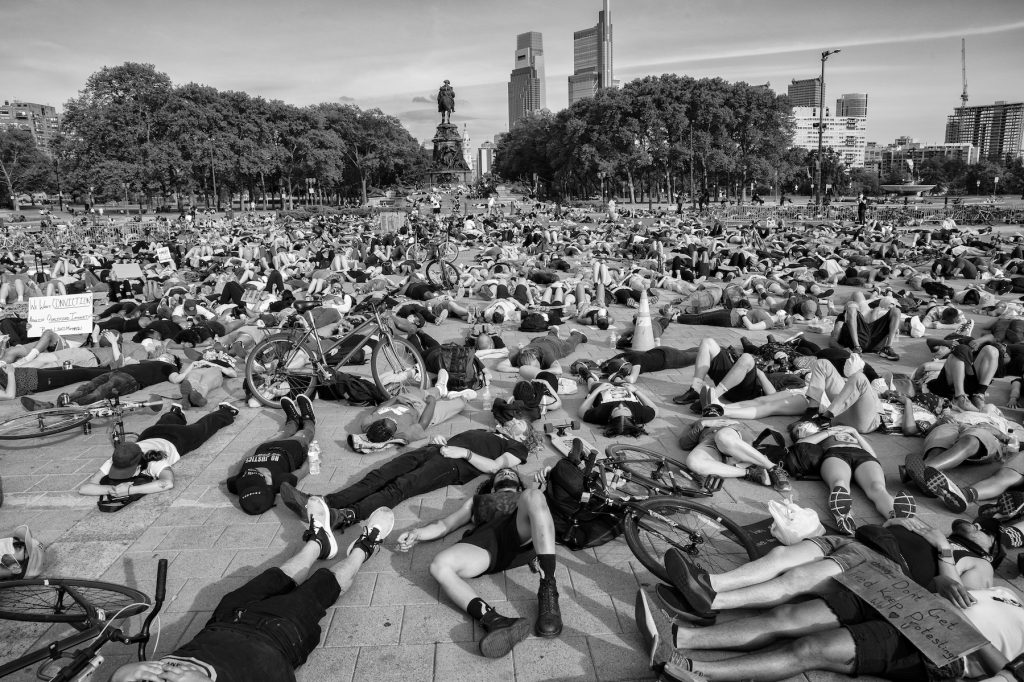 Nearby, a wall painted black is dedicated to Dominican-American artist Lizania Cruz’s work Obituaries of the American Dream (2020-21). Taking a nod from the New York Times’s revisionist obituary project, Cruz’s participatory project inserts excluded narratives taking the form of a stack of newspapers one can take from the gallery. Each newspaper contains testimonies highlighting sad truths about the country’s failure to live up to its commitment to immigrants. 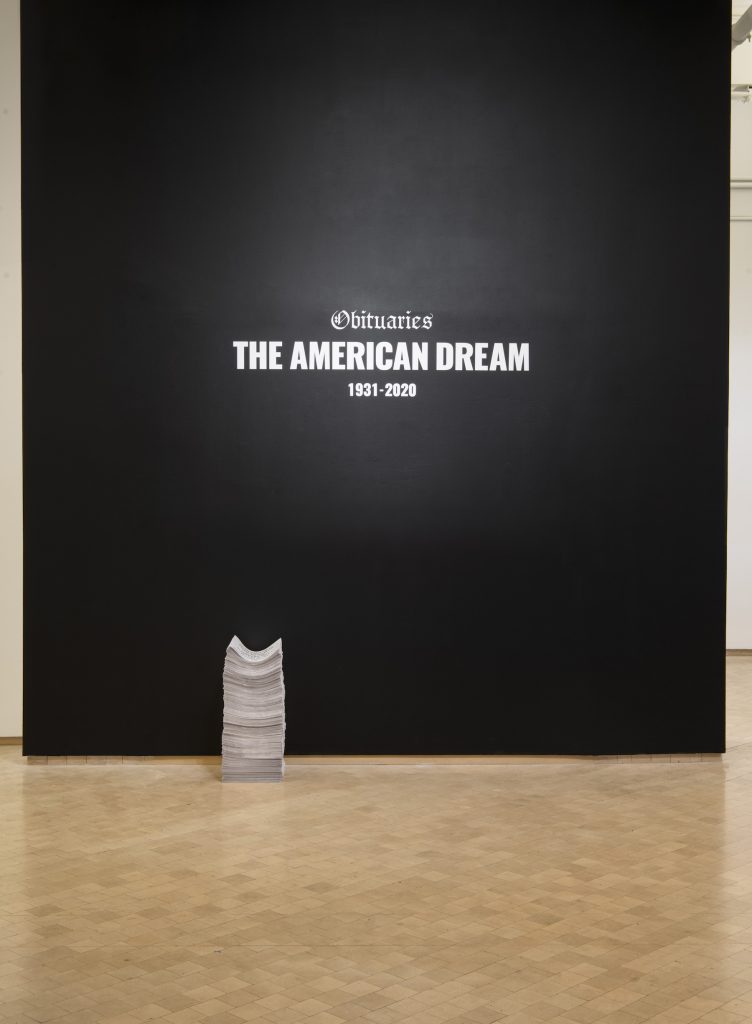 Lizania Cruz,
Obituaries of the American Dream (2020- 21). Courtesy the artist

One gallery over, the same critique takes the form of pink cake frosting with Chicago-based artist Yvette Mayorga’s paintings that also embody the idea of phony American idealism. (I reviewed Mayorga’s work in 2019.) 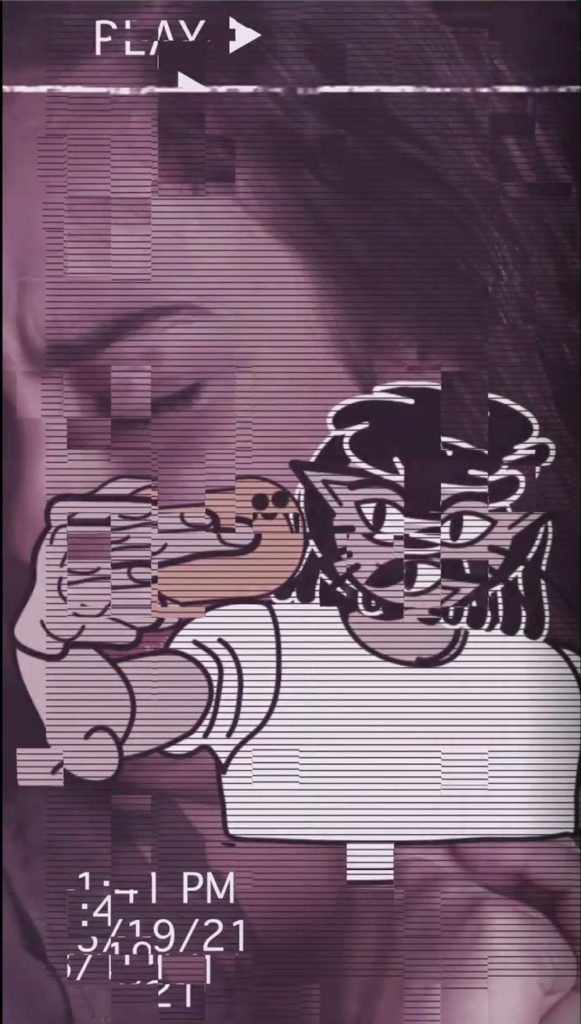 Yvette Mayorga, The Procession (After 17th Century Vanitas) In loving memory of MM (2020). Courtesy the artist.

The floor-to-ceiling vinyl chart Who Defines your Race? from San Diego-based Collective Magpies, also setting the tone right at the entrance, gets straight to the point of proving Latinx people exist as multitudes. The massive infographic shows survey responses about the complexity of personal and collective racial and ethnic perceptions, which quickly nods to a self-awareness in La Trienal that identity labels such as “Latinx” are imperfect. (The show is organized using the term ‘Latinx’ as a “placeholder” from which to unite and organize, curator Elia Alba said in a curatorial talk posted online.)

Like this infographic, there are several pieces in the show that favor straight-up facts in lieu of more poetic form. A 2018 video from the collective Torn Apart/Separados shows data visualizations taken from its interactive website using mapping technologies to draw conclusions or explore culpability for the humanitarian crisis of family separations in the U.S. The website is a response to an urgent need for justice that persists even with the country’s new administration under Joe Biden where minor detention centers continue to be built in Texas. Though the work is a clever use of technology, is it art and does it belong in a survey with the most reputable Latinx artists of our moment? 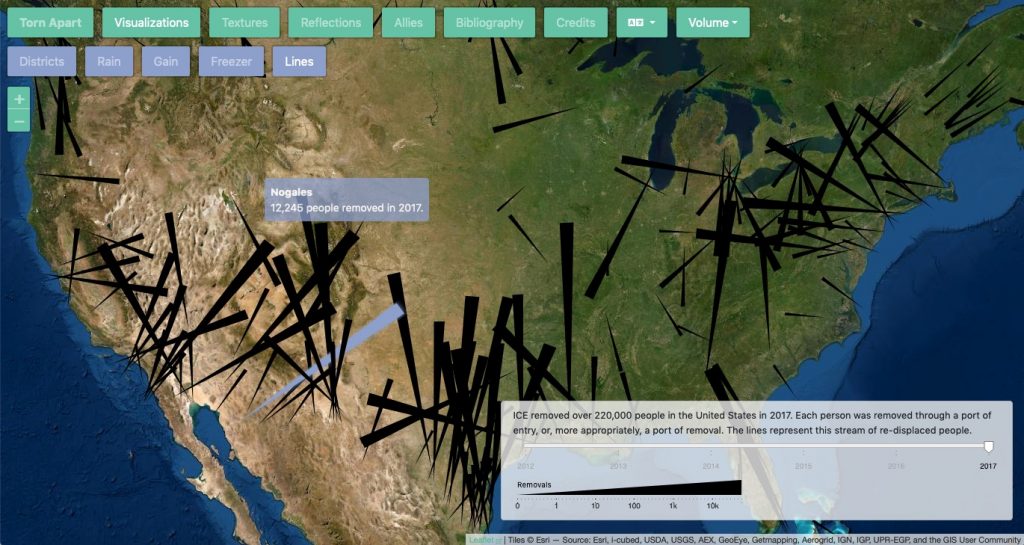 Los Angeles-based artist Carolina Caycedo, known for her poignant works about environmental justice, uses the recognizable format of a memorial: a drawing of a tree with the names of environmentalists murdered outside of the U.S. The piece, Genealogy of Struggling (2021), has a small altar with candles and herbs placed before it. Unlike the artist’s “Cosmotarrayas” or abstract water portraits, the piece is unequivocal rather than engaging. Like the Torn Apart/Separados website and Collective Magpie’s infographic, the altar foregrounds the global issue rather than using artistic nuance. These works function more as tools in service of content rather than forms that challenge the viewer.

Other works are more allusive in intention such as the unassuming sculptures of ektor garcia. The self-described nomadic artist uses craft techniques like ceramics, fiber, and metalwork in works that accentuate the hand. His elongated form of cascading butterflies is crocheted in copper wire and tenderly constructed with detailed craftsmanship. Ideas about the essence of the butterfly’s migratory patterns, the fluidity of gender, and the perpetual movement in garcia’s practice and existence could all be considered in interpretations of the work. 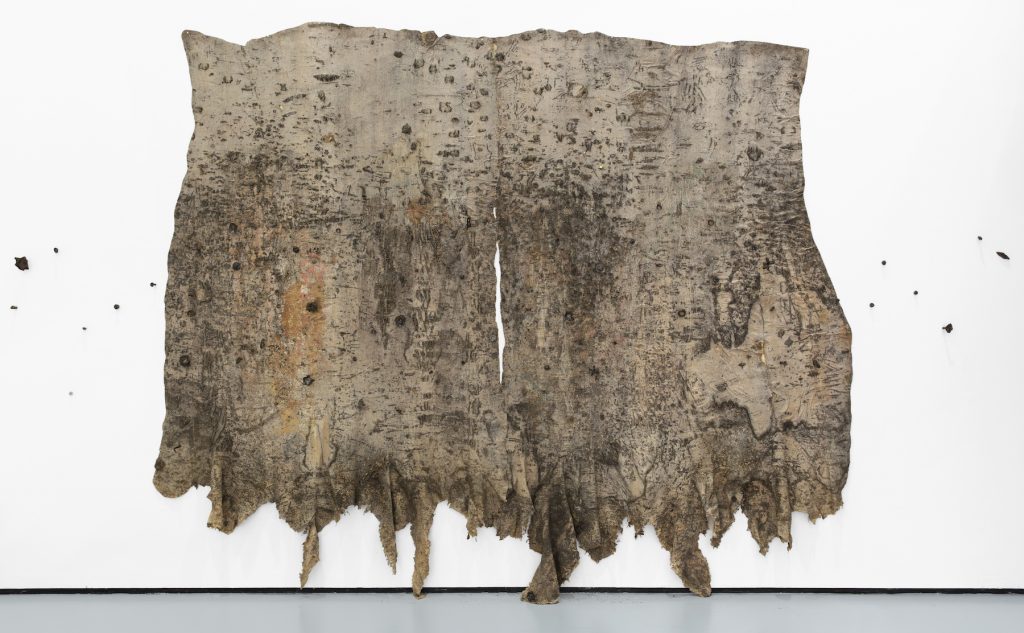 The rubber casts of Los Angeles trees by the artist Eddie R. Aparicio also challenge traditional forms and use novel techniques to create meaning. Aparicio visits ficus trees around parks on the outskirts of L.A. in danger of being cut down. Each time he visits the tree, he applies layers of rubber until he can capture the exterior essence of the tree, human markings and all. The works hold fleeting cultural imprints of communities also on the verge of displacement and are visualizations of the human effects on the environment.

There’s a prevailing theme of resilience that runs throughout the galleries. La Trienal’s title “Estamos Bien” is also the name of Puerto Rican pop star Bad Bunny’s post-Hurricane Maria anthem, a tongue-in-cheek declaration that “we good” despite experiencing an extraordinary natural disaster and delayed aid from the U.S. That adaptive sentiment is explored in pieces like New York- and Peru-based artist xime izquierdo ugaz’s photo archive documenting a chosen queer family. Spilling from a gallery corner, the intimate portraits are reminiscent of a proud parent’s living room wall where the star qualities of loved ones are on display. The pictures document the radical act of recreating the supportive bonds of family that queer folks may be denied.

From Michael Menchaca,
A Cage Without Borders (2020-21). Courtesy the artist.

Moving in the opposite direction of resilience toward compounding anxiety is Mexican-American artist Michael Menchaca’s critique of the surveillance state as related to Black and brown people. The chaotic 3-channel digital animation A Cage without Borders asks us: What if you could step inside the Latinx algorithm? Would it contain images of Selena, AOC in her ‘tax the rich’ sweatshirt, and ICE agents opening fire? The work subjects the viewer to these and a cacophonous overload of flashing graphics while a computerized narration drawls on about the state of technological surveillance over a techno beat.

Menchaca’s collaged scenes of viral Latino imagery pop up phrases like “Carceral Technology Up to 100% Off!” and “Behavioral Gentrification,” presenting a constant state of pandemonium. The crowded screens are lined with emojis, corporate emblems from Google, Amazon, and Homeland Security, and Menchaca’s remixed Pre-Columbian cat glyphs. Not only is this an apt critique of how Latinos are mined as consumers, it physically reproduces the psychological anxiety of experiencing the landscape of online activism.

Another stunner in the show are from art darling Patrick Martinez whose impressive painting literally brings the outdoor aesthetics of Los Angeles—neon signs, stucco walls, and his signature clay rose adornments—into the gallery, playing on the appearance of quickly gentrifying neighborhoods. The artist told me this is the first public showing from this series, which is two years in the making, as his works are snatched up by institutions and collectors before being exhibited—a rare kind of market success for other artists in this survey. 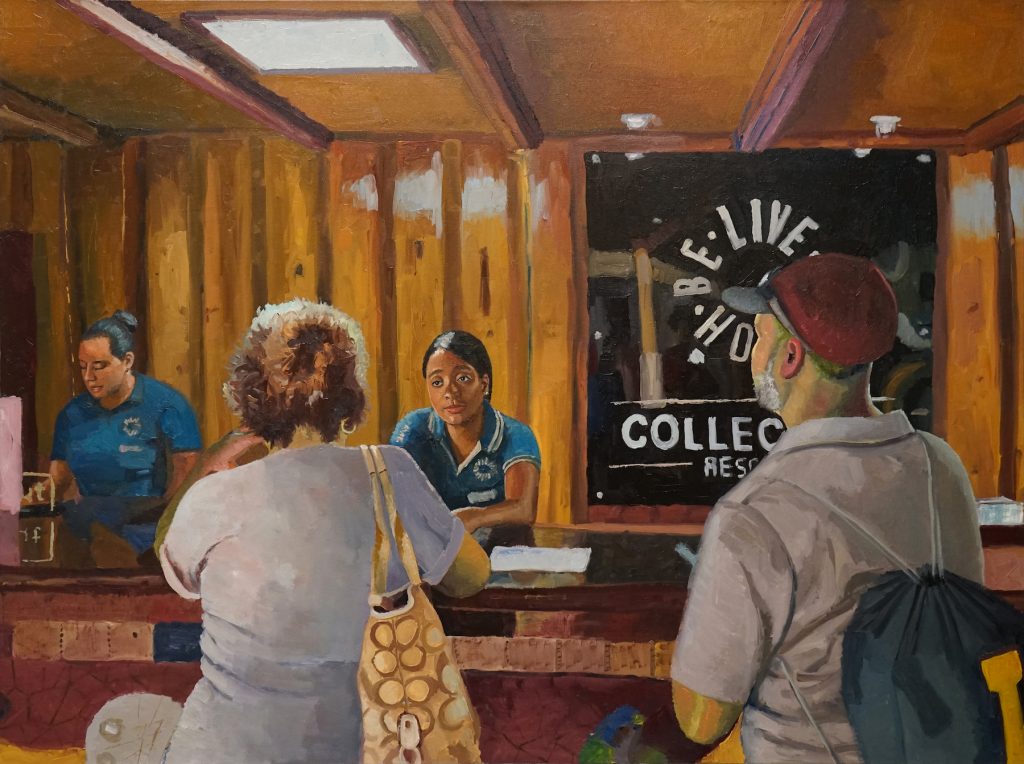 Raelis Vasquez, The Other Side of Tourism.
Courtesy the artist. 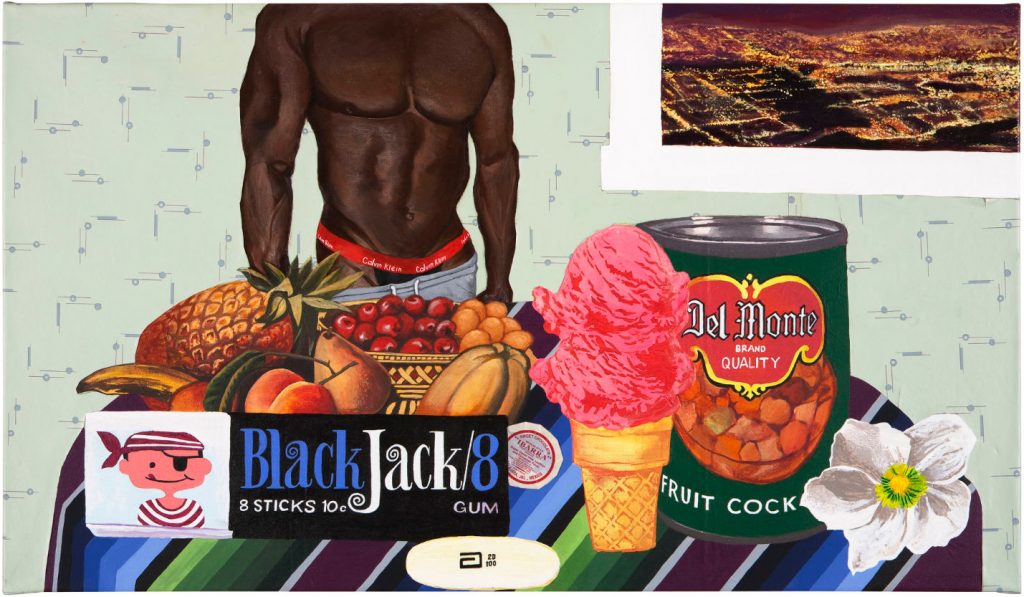 The variance in mediums and subject continues throughout the show as performance, minimalist architectural interventions, and sculptural works substantiate the claim that Latinx art cannot be defined through format but maybe through a sense of urgency. Although fulfilling a curatorial aim was favored over a balance of formal experimentation, aesthetics, and content in a few works, La Trienal shows how much latent and under-recognized talent there is in the field. 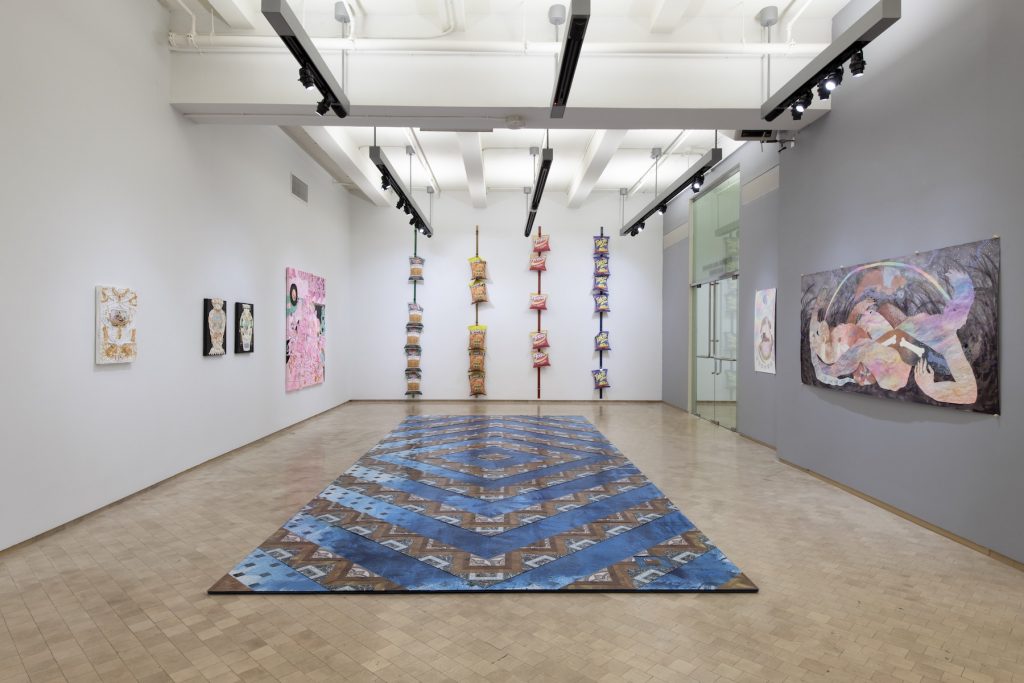 Though one could say the categorization of art through ethnic identifiers like “Latinx” becomes broad and obscures meaning, the exclusion of Latinx art from relevant art conversations—even in El Museo’s own recent history of prioritizing Latin-American art over Latinx artists—is a reality. That persistent exclusion in museum collections, gallery shows, etc., and a lack of contextualization that feeds misunderstandings about the work, is a running testament to the need for these surveys. Though the collected works are but a glimpse into the range of Latinx art, the curators have outlined a communal need for doing justice to its breadth. It’s up to the rest of the art world to respond—but if not, no worries. Estamos bien.