Hong Kong’s fall art season started with a bang. Eager collectors crowded into the second edition of the boutique art fair Unscheduled, which took over the vacant former Topshop flagship store on Queen’s Road earlier this month. After a wave of gallery openings, the city’s elite is now preparing for an action-packed slate of auctions as well as the Fine Art Asia fair in October.

The excitement surrounding these commercial events seems to exist in a parallel universe from the anxiety gripping many in the cultural sector and beyond since the implementation of Beijing’s national security law last year. Never before has the vitality of the market felt so disconnected from the everyday lives of Hong Kong people.

Some see the national security law, which bans activities that government deems related to secession, subversion of the state, terrorism, and collusion with foreign agents to endanger national security, as a stabilizing force after the social unrest that gripped the city in 2019. Others consider the law—and the subsequent mass arrests of pro-democracy politicians and journalists, the abrupt closure of a pro-democracy newspaper, the expansion of the film censorship ordinance, and the disbanding of civil organizations—to be a grave clampdown on freedom in the city. 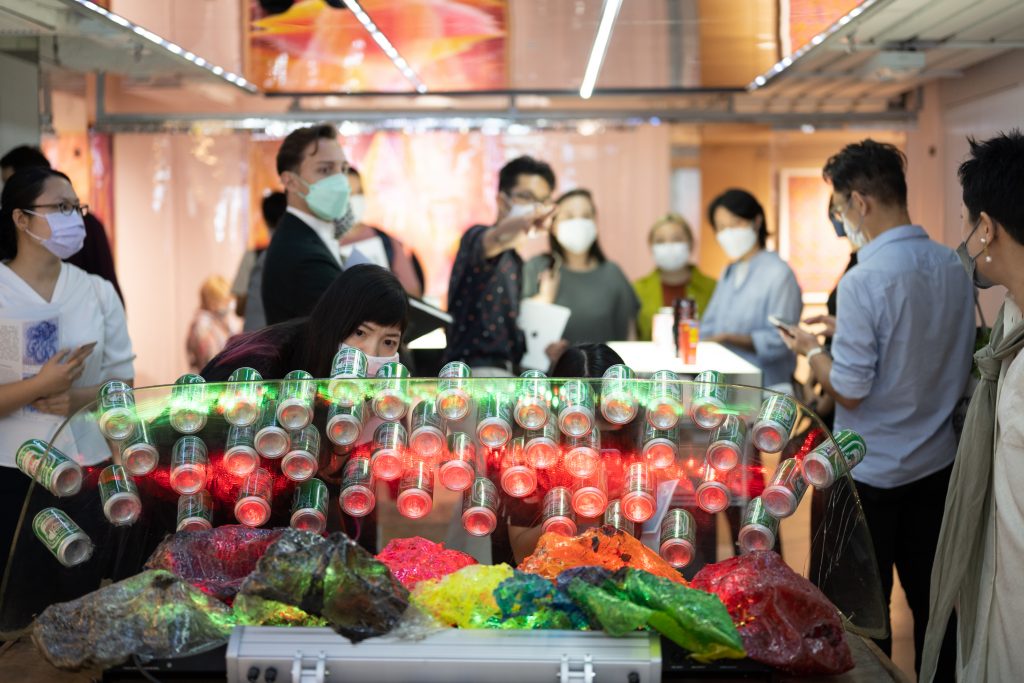 This fear has sparked the biggest exodus the city has seen in decades. Although the government does not keep statistics on how many people have left town permanently, figures show that Hong Kong’s population has dropped by 1.2 percent—nearly 90,000 people—since the law took effect last June.

“Running a gallery in Hong Kong right now is more challenging than doing so anywhere else in the world,” one gallerist told Midnight Publishing Group News on the condition of anonymity. “There are too many considerations, not just about money and space. Artists are leaving. Some have left quietly, or they are planning to. The environment makes it harder to create.”

Perhaps counterintuitively, these challenges have coincided with a flourishing of business in Hong Kong as a new generation of young Asian buyers pours millions of dollars into art. “The business has been going so well over the recent year or two,” the gallerist continued. “Artists may leave, but galleries are staying.”

“Everyone Wants to Support the Hong Kong Art Community”

Even in the shadow of the national security law, the success of Unscheduled, organized by the Hong Kong Art Gallery Association, illustrates how much local dealers are benefitting from a renewed interest in Hong Kong art, which has historically been overlooked by regional collectors. (A similar dynamic was evident at Art Basel Hong Kong in May.)

“Everyone wants to support the Hong Kong art community these days,” said Angela Li, whose gallery sold all eight oil paintings at her stand by the young artist Cheung Tsz Hin for prices between a few thousand Hong Kong dollars and HK$70,000 ($8,994).

The recent commercial success of Hong Kong artists such as Chris Huen, Firenze Lai, and the late Matthew Wong, who was born to a Hong Kong family in Canada and grew up in the city, has helped boost the profile of other local artists. 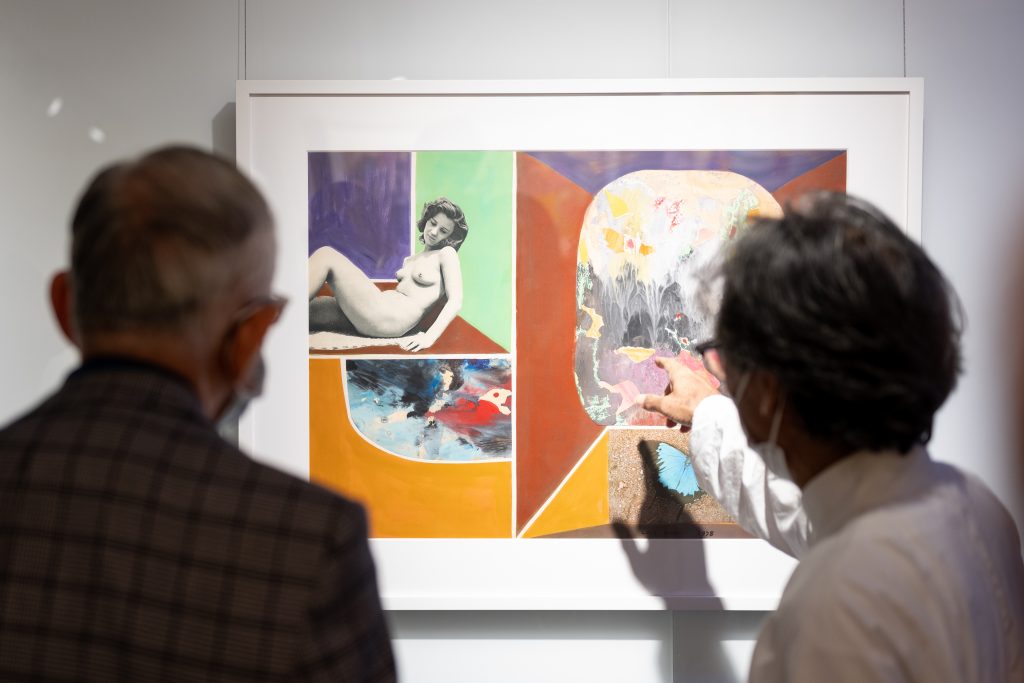 “I have a lot more collectors who previously did not collect Hong Kong art but are now interested,” said Kenneth Young, the director of Karin Weber Gallery, which cleverly converted Topshop’s former fitting rooms into mini galleries for its presentation of artists affiliated with the Hong Kong Baptist University’s Academy of Visual Arts.

The inquiries, Young continued, are coming from everywhere: locals and expats living in Hong Kong, foreign collectors who previously collected only Western and Japanese art, and financial institutions looking to boost their holdings. The fact that many of these collectors are considering art in a range of media—as opposed to just paintings—leads him to believe that return on investment is not their only motivation.

To Stay or Go?

Reports of a Hong Kong exodus have been making international headlines for months, often accompanied by heartbreaking images of families and friends saying tearful goodbyes at the airport. Emigration has become easier as countries including the United Kingdom, Canada, Australia, and the United States relax their visa policies for Hongkongers. Most people keep a low profile about their departure, announcing their relocation on social media only after they have arrived safely—if they go public at all. 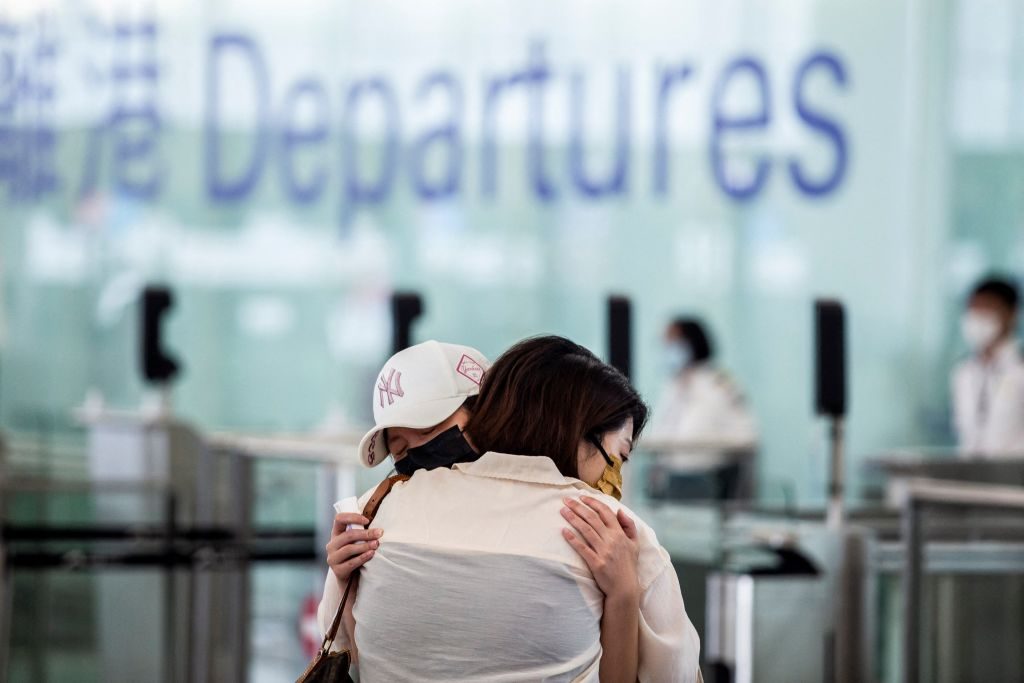 Twice a day, Hong Kong’s virtually deserted airport fills with the sound of tearful goodbyes as residents fearful for their future start a new life overseas, mostly in Britain. (Photo by ISAAC LAWRENCE/AFP via Getty Images)

It is understood that some members of Hong Kong’s arts community have already relocated abroad, mostly to Britain and Taiwan. One gallerist told Midnight Publishing Group News that at least half of the artists they work with have left or are planning to leave. “They come from all age groups,” the gallerist said. “Some of them have children.”

There are no statistics on exactly how many people leaving the city are arts and culture professionals. But a number of prominent media personalities, political commentators, and journalists have fled, as have two of the six directors of the dystopian anthology film Ten Years, which angered Beijing. Jevons Au moved to Canada a few months ago, while Ng Ka-leung recently announced that he has landed in Britain.

Meanwhile, artist and illustrator Lau Kwong-shing, who has published drawings related to the 2019 protests, relocated to Taiwan after his father warned him not to return to Hong Kong. Critics who remain in the city have gone silent and turned down interview requests.

The mass arrests of pro-democracy politicians—many of whom have been denied bail and remain behind bars before facing trial—this past spring is what prompted artist Kacey Wong to leave the city. He arrived in Taiwan in late August. “Hong Kong has become a red zone,” Wong told Midnight Publishing Group News from his new studio in Taichung. “I’m now in a green zone. [Taiwan] has 100% freedom, like what we used to have in Hong Kong.”

Wong sees the crackdown as the collapse of the legal system that once made Hong Kong proud. Known for his political art, specifically performances that became fixtures at the city’s protests, Wong has also been named and shamed by the local state-owned media for “glorifying rioters.”

“I’d be really worried about speaking to the media if I were still in Hong Kong,” Wong said. “I could not function normally.”

Indeed, speaking up can come with a price in Hong Kong. Recently, Canto-pop singer and activist Denise Ho had a performance cancelled by the Hong Kong Arts Centre, which alleged that “public order or public safety would be endangered” if it were to go ahead. 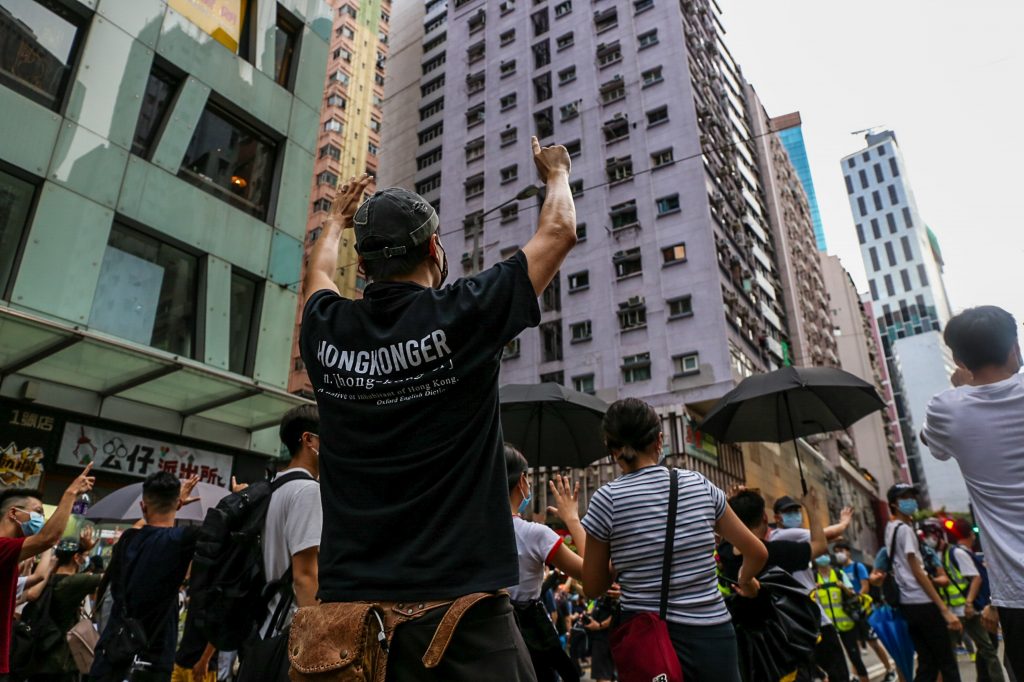 Protests against the National Security Law in Hong Kong on July 1, 2020. (Photo by Katherine Cheng/SOPA Images/LightRocket via Getty Images)

Outspoken members of the Arts Development Council have stepped down, with artist Chris Chan citing fear for his personal safety. Political cartoonist Justin Wong temporarily shut down his Facebook page, while the M+ Museum removed an image of Ai Weiwei’s Study of Perspective: Tian’anmen from its website as it awaits authorities’ approval. Five speech therapists were arrested over children’s books that were deemed seditious. The city’s security chief also accused the Hong Kong Journalists Association of infiltrating schools (a charge the association has denied) and demanded a list of its members.

“My departure is a reflection of a generation of Hongkongers,” Wong said. “This is only the beginning. More people like me will appear in the U.K., Taiwan, Canada, and many other places. Exile literature, exile Hong Kong art, is likely to be big in the future.”

What about the art produced in Hong Kong? “The art market, art fairs will go on. Sales will continue,” Wong predicted. While some artists will opt for coded visual language to address sensitive issues, those who choose to stay are more likely to steer away from political topics entirely, he said. More colorful, decorative works are likely to emerge as a result.

The Future of the Hong Kong Market

Those who choose to remain in Hong Kong—for now, at least—have hope. Willem Molesworth, the former director of de Sarthe and the vice president of the Hong Kong Art Gallery Association, is planning to open a new contemporary art space in the city in December.

“There are more gallery openings now than in the pre-pandemic days,” Molesworth said. “The younger generation are becoming serious collectors. More people in Hong Kong are buying art, period.”

Hong Kong’s cultural infrastructure has also grown considerably in recent years with the opening of public institutions like Tai Kwun, the revamped Hong Kong Museum of Art, and the forthcoming M+. “People recognize the power of art, to pick up where words fail… given what the city has been through,” Molesworth said. 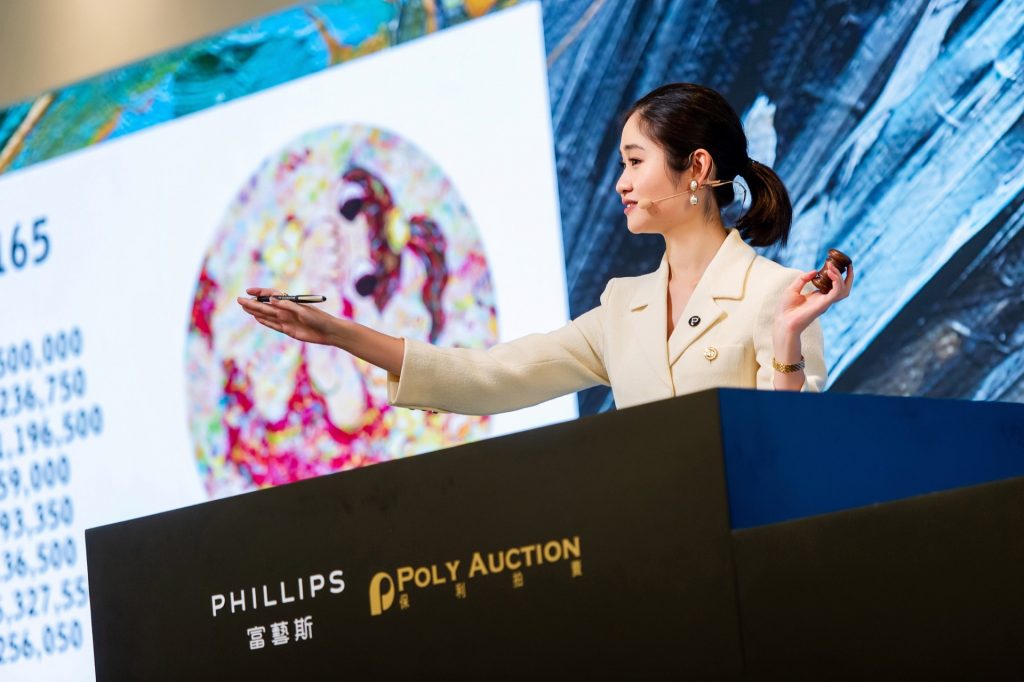 A number of Molesworth’s clients who buy work by established artists from major international galleries are now collecting emerging local artists as well, he said. Plus, the diverse price range of Hong Kong art points to a healthy, growing market.

The broader question, however, is whether Hong Kong’s art scene can remain vibrant under these conditions long-term. “When you take the critical edge away,” Kacey Wong asked, “is it still art?”